Accessibility links
Reporter May Have Discovered Clotilda, The Last American Slave Ship : The Two-Way There's still some uncertainty but Ben Raines says based on research, local lore and physical evidence, this might be the ship that illegally carried more than 100 Africans into slavery.

Reporter May Have Discovered Clotilda, The Last American Slave Ship

Reporter May Have Discovered Clotilda, The Last American Slave Ship 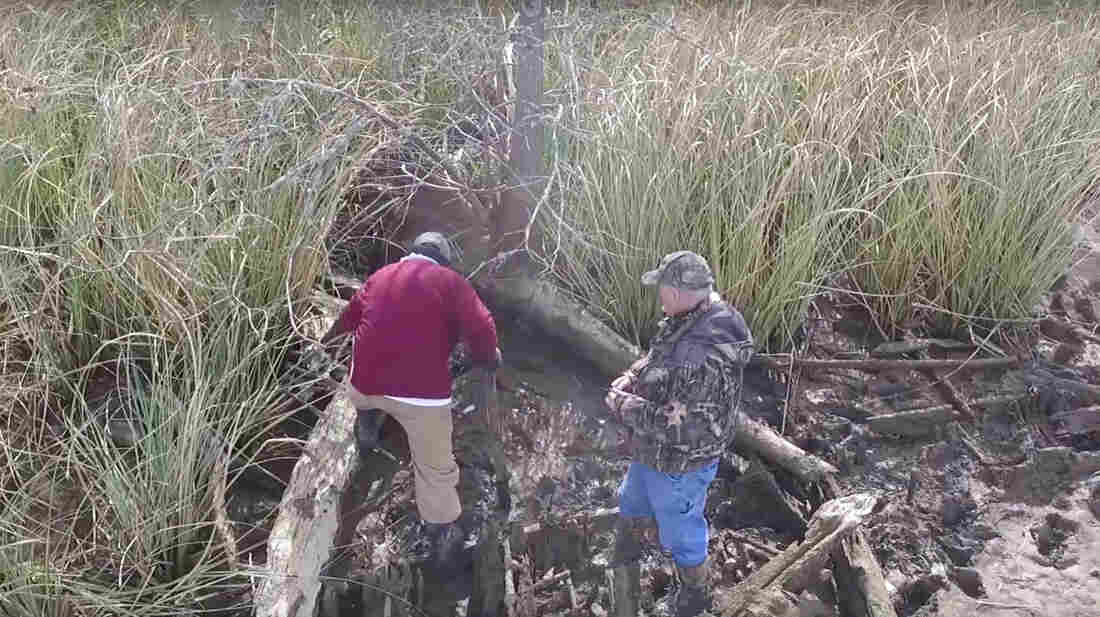 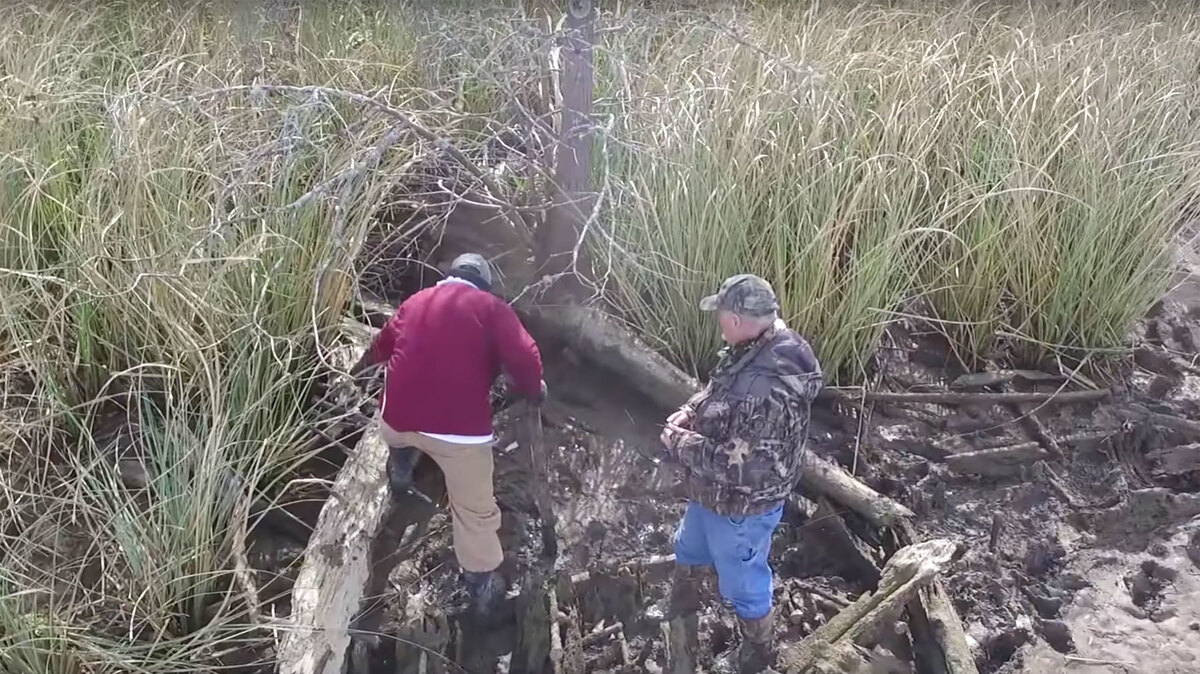 The bow, the stem and the ribs of the ship stretched into the Alabama sky in plain sight for nearly a century, but weather and time eventually buried the wooden vessel below the muddy waters of the Tenslaw Delta. Until last month when the "bomb cyclone" blasted an unusually cold northern wind through the region that blew out 2 1/2 feet of water and left the ship exposed.

That was the break Ben Raines, a coastal and environmental reporter for AL.com had been waiting for.

Raines believes the charred remains of the shipwreck he discovered are likely those of the Clotilda, the last American vessel to illegally bring African slaves to the U.S. nearly 160 years ago.

Raines told NPR Wednesday that seeing the remnants of the schooner breaking through the river was thrilling.

"It was actually breathtaking and I thought, 'This might be it!'" he said.

He described his initial view of the site: "With the tides more than 2 feet lower than normal, I saw this big sort of dinosaur backbone almost, arcing up out of the mud along the shoreline."

Although he's not certain that it is the Clotilda, he says he has "a really good hunch" about it.

Before heading out to the site, Raines compiled months of research, collecting information from historical records, articles and notes from the captain's account of the trip. He interviewed locals with century-old ties to the region. Until he stumbled on one who told him he might know its location. So Raines set out to find it.

"It was old, it was burned, it was right where the guy said [the captain] burned it and it was where this local old-timer said it was," Raines said.

The Clotilda, which was retrofitted from a former timber cargo ship into an illicit human trafficking vessel, carried 110 African slaves from what is now the west African nation of Benin into Mobile Bay in about 1860. But shortly after delivering the captives to nearby plantations, the captain of the 86-foot schooner steered it to a secluded spot and set it on fire, in an attempt to destroy any evidence of the illegal voyage, according to Raines.

Greg Cook, a marine archaeologist who explored the site with Raines, said there is no definitive evidence it is the same ship, but there is plenty to indicate that it is from the correct time period and that it may have once been used to transport timber.

Like the infamous slave ship, this one also had two masts. "Then you look at how the ship was rigged" with "iron fasteners that are commonly found in lumber trade schooners" and that's another connection, Cook said. Additionally, "based on what we know of the width or the beam of the ship, it's spot-on with the measurements that we had."

Cook said, rather than seeking proof that the buried ship is the Clotilda, he and his colleague John Bratten, were more intent on finding evidence that would rule it out as a possible candidate.

"We were looking for anything that could clearly tell us it was not the Clotilda and we didn't see anything that was exposed that would tell us it's not that ship," he explained.

Joycelyn Davis said news of the possible discovery of the ship has triggered a wave of complicated emotions for her and her family. Davis, 41, is a sixth generation descendant of the people who were transported on the ship, who are now referred to as the Clotilda Africans.

"It's overwhelming," she said. "To think of those 110 plus people that were taken away from their home, across the ocean to America. ... It makes me sad."

The slave trade was outlawed during the administration of President Thomas Jefferson in 1807 — 53 years before the Clotilda touched American soil — though slavery remained legal until after the Civil War with the passage of the 13th Amendment in 1865. And it was on a bet that the ship's owner, Timothy Meaher, hired Capt. William Forster to smuggle a shipment of slaves into the South. Meaher, a wealthy and respected businessman was an ardent proponent of slavery and was convinced he could slip a cargo ship past port officials without any repercussions.

It worked, although historian Sylviane Diouf said in her book, Dreams of Africa in Alabama: The Slave Ship Clotilda and the Story of the Last Africans Brought to America, the journey included an attempted mutiny by the crew.

Those who survived the treacherous voyage were surreptitiously put to work on plantations in the Mobile area shortly before the Civil War broke out.

Following the war, Diouff writes, the freed men and women tried to get first Meaher then the government to arrange their return to their home in Africa but both refused. Instead, Meaher sold them land on which they established a community still known as Africatown, three miles north of downtown Mobile.

"They ruled it according to their customary laws, continued to speak their own languages-which they taught their children- and insisted that writers use their African names so that their families would know that they were still alive.

"Cudjo Lewis, the last survivor of the Clotilda died in 1935."

Historian Henry Louis Gates Jr. says their descendants, including Davis, are the only group of African Americans who can trace their history to the actual slave ship that carried them to the U.S. as well as their ancestral home in Africa.

Davis said, if it is the ship, she would like to see it preserved in a museum. She would also like the Meaher family, who remain prominent in Mobile, to come forward with their own history.

"After all, it is their ship," she said.

"I don't want anything from them but I do want to hear the history of their family. To have them tell it," she added.

Raines says throughout history, plantation owners have made attempts to pretend the Clotilda incident never happened. "So finding the ship and being able to tie it to [the descendants'] experience, could be a very powerful thing and go a long way toward healing those wounds."

In an episode of Finding Your Roots, a program that explores celebrity genealogies, famed hip hop drummer Questlove found out he is a descendant of the slaves brought over on the Clotilda.

Famed hip hop drummer Questlove finds out he is a descendant of the Clotilda Africans.

Bratten and Cook, who also lead archaeological expeditions through the University of West Florida, figure it will take more than a year to move ahead with a full scale excavation of the ship, most of which is still buried in mud. They will need permits from the Alabama Historical Commission.

In a statement Tuesday, the agency said:

"[It] is our agency's duty to uphold the state law that manages and protects shipwrecks and archaeological sites in Alabama waters. After receiving the necessary permits and the development of a research design, the UWF maritime archaeology department can examine whether the vessel is, in fact, the Clotilda. However, such an endeavor requires both funding and planning so any question will take time to resolve.

But even then, Bratten said, "We still have to get lucky."

It is possible that all traces of the slave-capturing voyage have been erased by the fire, time and the elements.