Accessibility links
New Fossil Found In Israel Suggests A Much Earlier Human Migration Out Of Africa : The Two-Way Scientists have discovered a part of a fossilized human skull that's around 180,000 years old. It is now the oldest human fossil outside Africa.

Listen · 2:46 2:46
New Fossil Found In Israel Suggests A Much Earlier Human Migration Out Of Africa 2:46 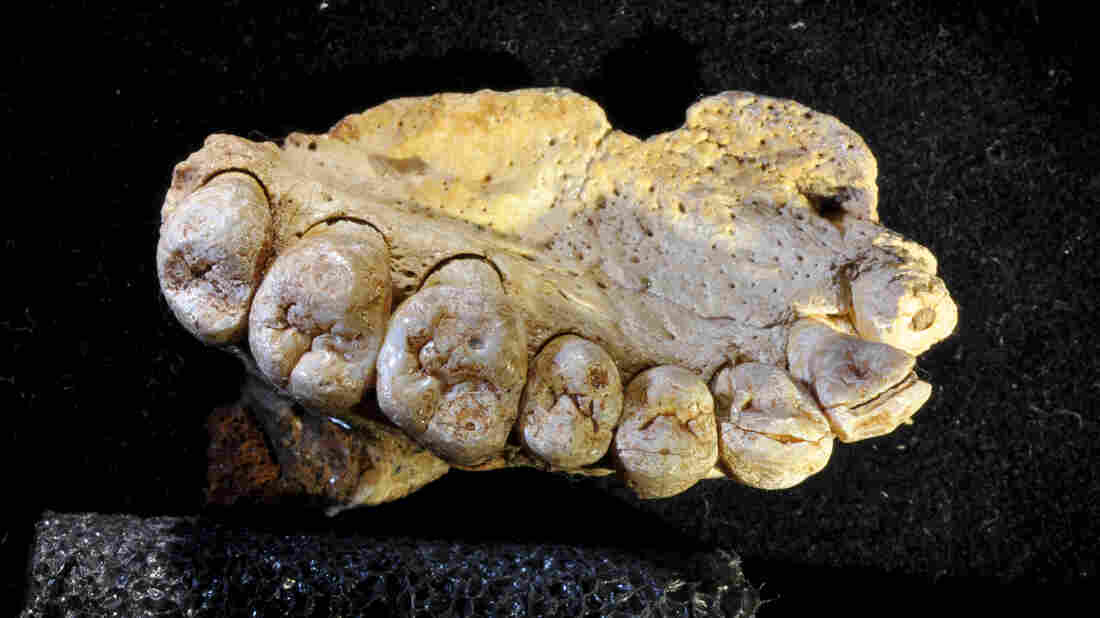 The fossil found in Misliya cave. Details of the teeth — their shapes and sizes relative to each other — helped scientists confirm that this belongs to Homo sapiens. Gerhard Weber/University of Vienna/Science hide caption 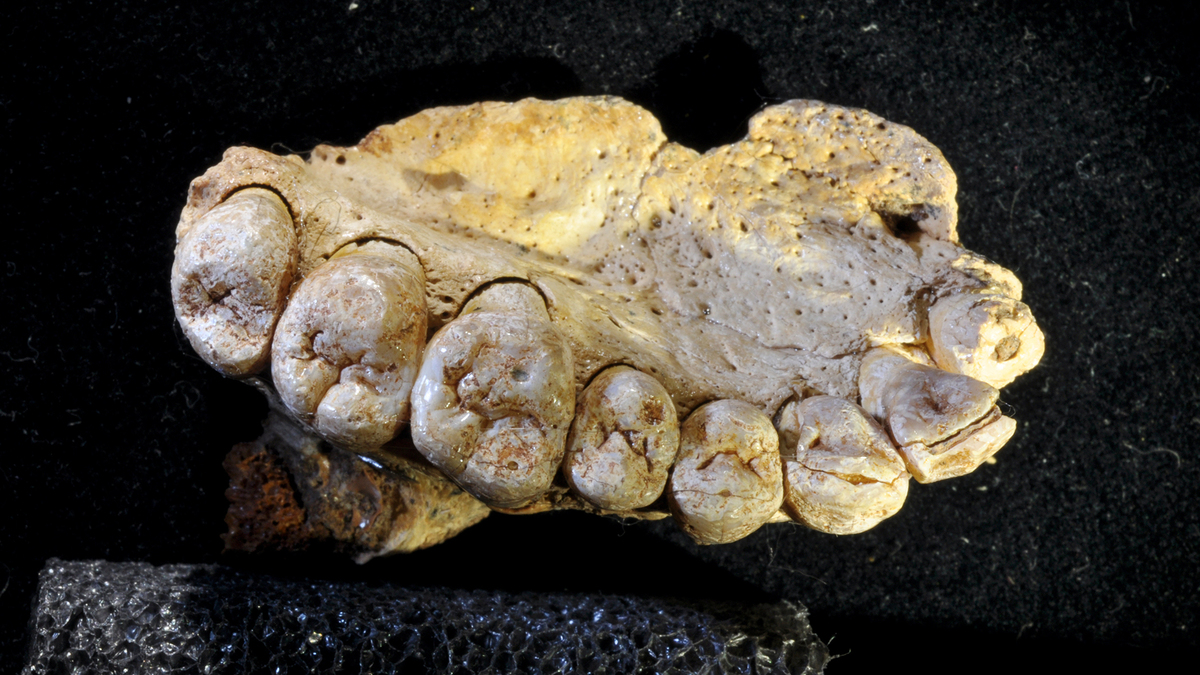 The fossil found in Misliya cave. Details of the teeth — their shapes and sizes relative to each other — helped scientists confirm that this belongs to Homo sapiens.

Archaeologists in Israel have discovered the oldest fossil of a modern human outside Africa. The fossil suggests that humans first migrated out of the continent much earlier than previously believed.

The scientists were digging in a cave called Misliya, on the slopes of Mount Carmel on the northern coast of Israel. "The cave is one of a series of prehistoric caves," says Mina Weinstein-Evron of the Zinman Institute of Archaeology at the University of Haifa, who led the team. "It's a collapsed cave, but people lived there before it collapsed."

The cave had been occupied for several hundred thousand years, she says.

All the archaeological evidence suggested that the ancient people who lived in the cave were hunter-gatherers. "They were hunting animals, mainly ungulates, like fallow dear, gazelle, aurochs [an extinct species of wild cattle] and other small animals," says Weinstein-Evron. "They built fireplaces throughout the length of the cave, again and again, in the same place, in the same sort of defined arrangement."

They made their stone tools using a technique called Levallois, which originated in Africa at least some 300,000 years ago and is known to have been used by both humans and Neanderthals.

Weinstein-Evron says she and her team wanted to find out which species of ancient humans lived in the cave. So, she says, they kept digging. "And among the animal bones and flint tools we found a jawbone, an upper jawbone of an individual," she says.

It was the upper left jaw, with parts of the nasal cavity and cheekbone still intact. And it looked remarkably similar to that of modern humans, she says. "It really is like us. ... It's like you and me."

The fossil also had intact teeth. "We have the pre-molars, the molars, the canine, and we have the lateral incisor," says Israel Hershkovitz, a paleoanthropologist at Tel Aviv University who was part of the team that studied the fossil.

A detailed analysis of the jawbone and the teeth confirmed that it indeed belonged to someone of our species, Homo sapiens. And when they dated the fossil, it turned out to be between 177,000 and 194,000 years old, making it the oldest known such fossil outside the African continent. 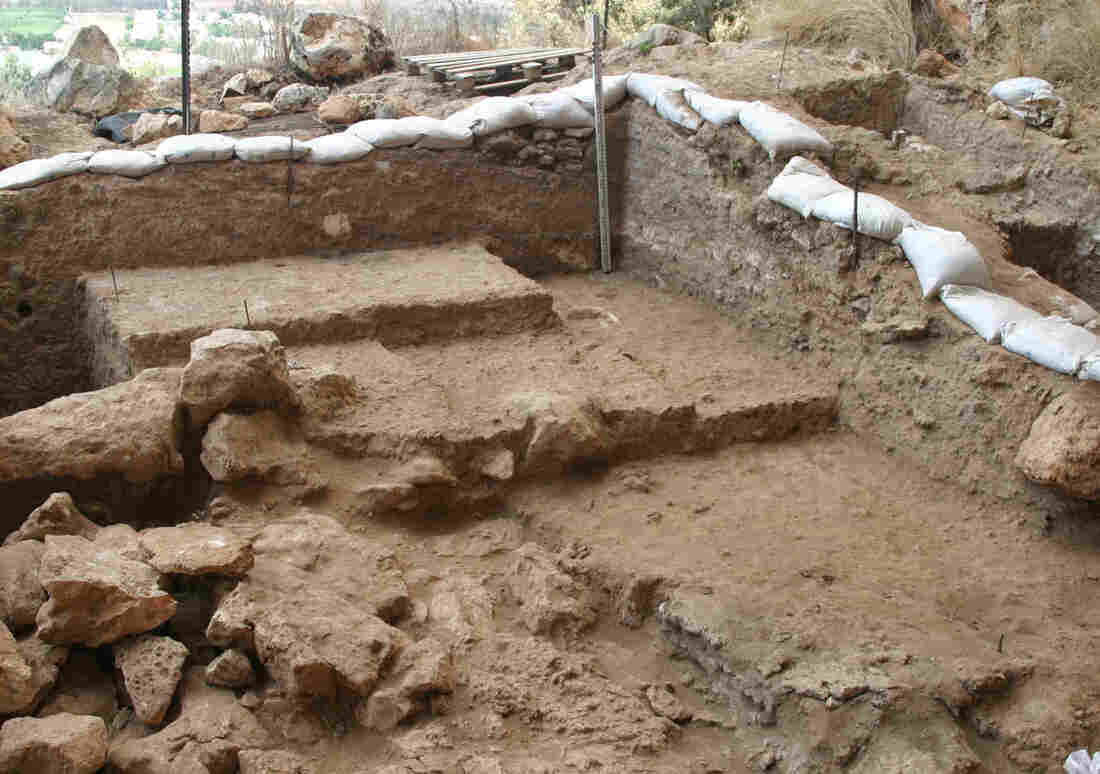 The Misliya cave during excavation. The ancient humans repeatedly built hearths in this cave over the hundreds of thousands of years that they lived in it. Dark ashy sediment can be seen at the bottom central right of the picture. Mina Weinstein-Evron/Haifa University/Science hide caption 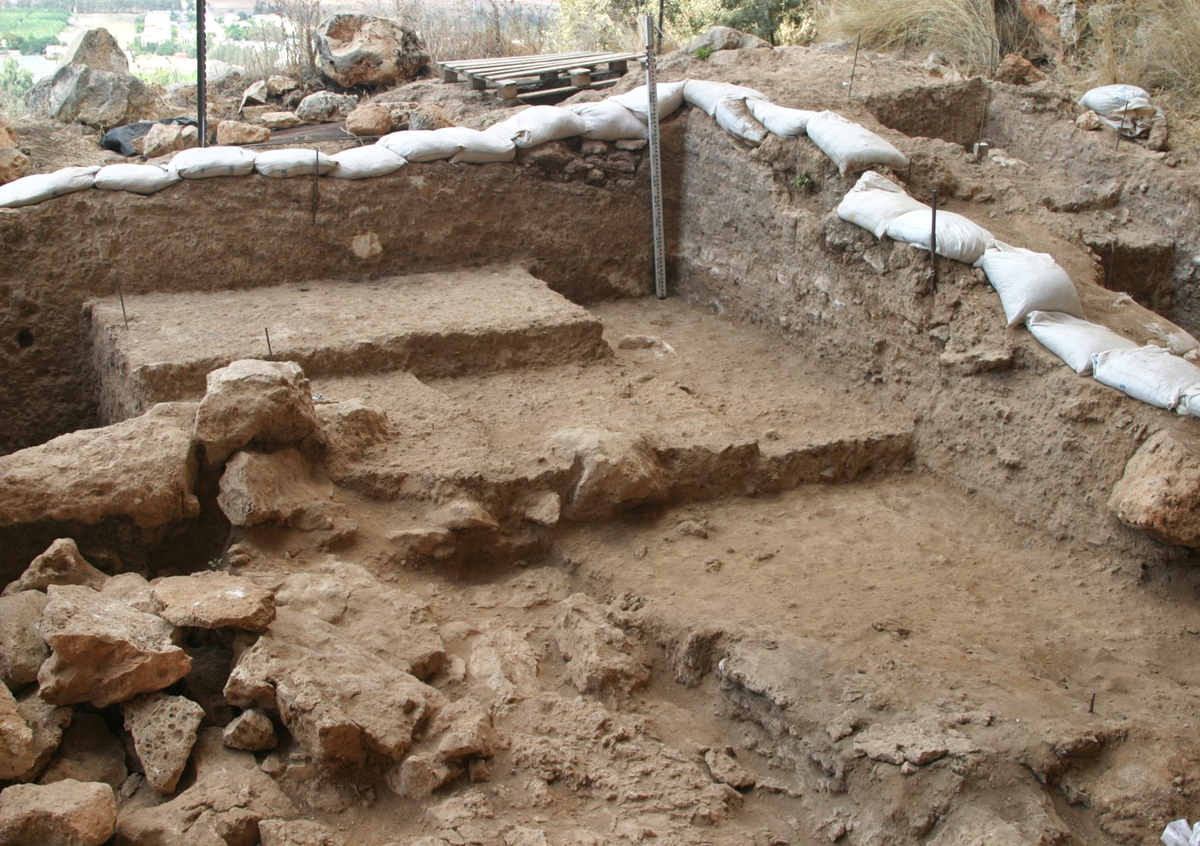 The Misliya cave during excavation. The ancient humans repeatedly built hearths in this cave over the hundreds of thousands of years that they lived in it. Dark ashy sediment can be seen at the bottom central right of the picture.

"Honestly, we were extremely surprised," says Hershkovitz. "We were not expecting to find a modern human so early in time."

He and his team reported their findings Thursday in the journal Science.

"All our earlier evidence suggested that Homo sapiens got out of Africa about 120,000 years ago," says Michael Petraglia, at the Max Planck Institute for The Science of Human History. That evidence included fossils found in Israel (in nearby caves on Mount Carmel) that date to between 80,000 and 120,000 years ago.

So this new discovery is surprising, he says. "It is a big deal."

What this new finding shows is that there were many waves of migration out of Africa starting very early in our evolutionary history, he says.

"What the Misliya cave find indicates is that there were times when Homo sapiens populations seeped out of Africa," says Rick Potts, a paleoanthropologist at the Smithsonian Museum of Natural History.

Groups of humans were probably exploring at different times, he says, "looking over the next hill and down into the next valley."

They were probably exploring new frontiers based on local ecological conditions.

3.3 Million-Year-Old Fossil Sheds Light On How The Spine Evolved

"They didn't have maps. They didn't know where they were going, whether they were in Africa or wherever," says Potts. They were just following perhaps where the game was good, and food resources were good for eating, there was water."

But these explorations were likely a "process of colonization that failed," he says.

"There isn't very good evidence for these early humans being part of our gene pool outside of Africa," says Petraglia. That means these groups, including the group in Misliya cave, probably died off at some point.

Genetic evidence suggests humans alive today have descended from a group of humans who left Africa about 60,000 years ago.