Accessibility links
Protests Across Russia Call For Boycott Of March 18 Presidential Vote : The Two-Way Opposition leader Alexei Navalny was wrestled to the ground and bundled into a waiting police van amid protests in some 100 cities across the country. 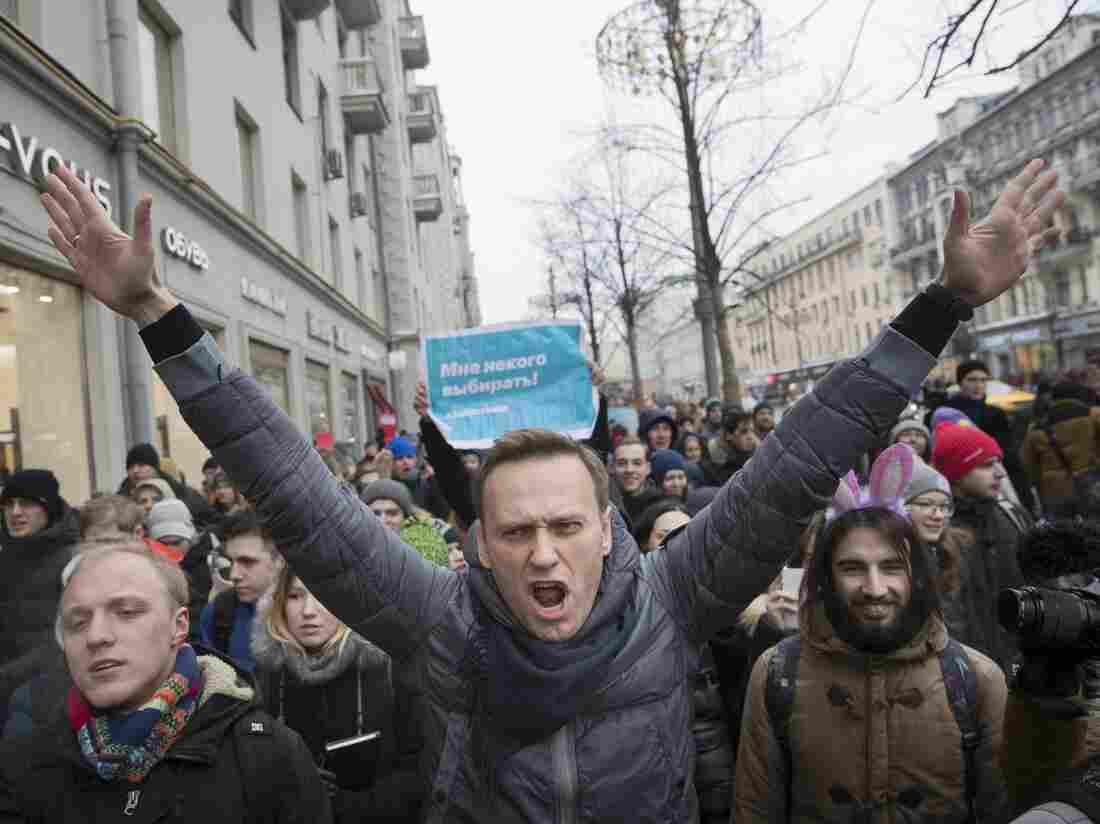 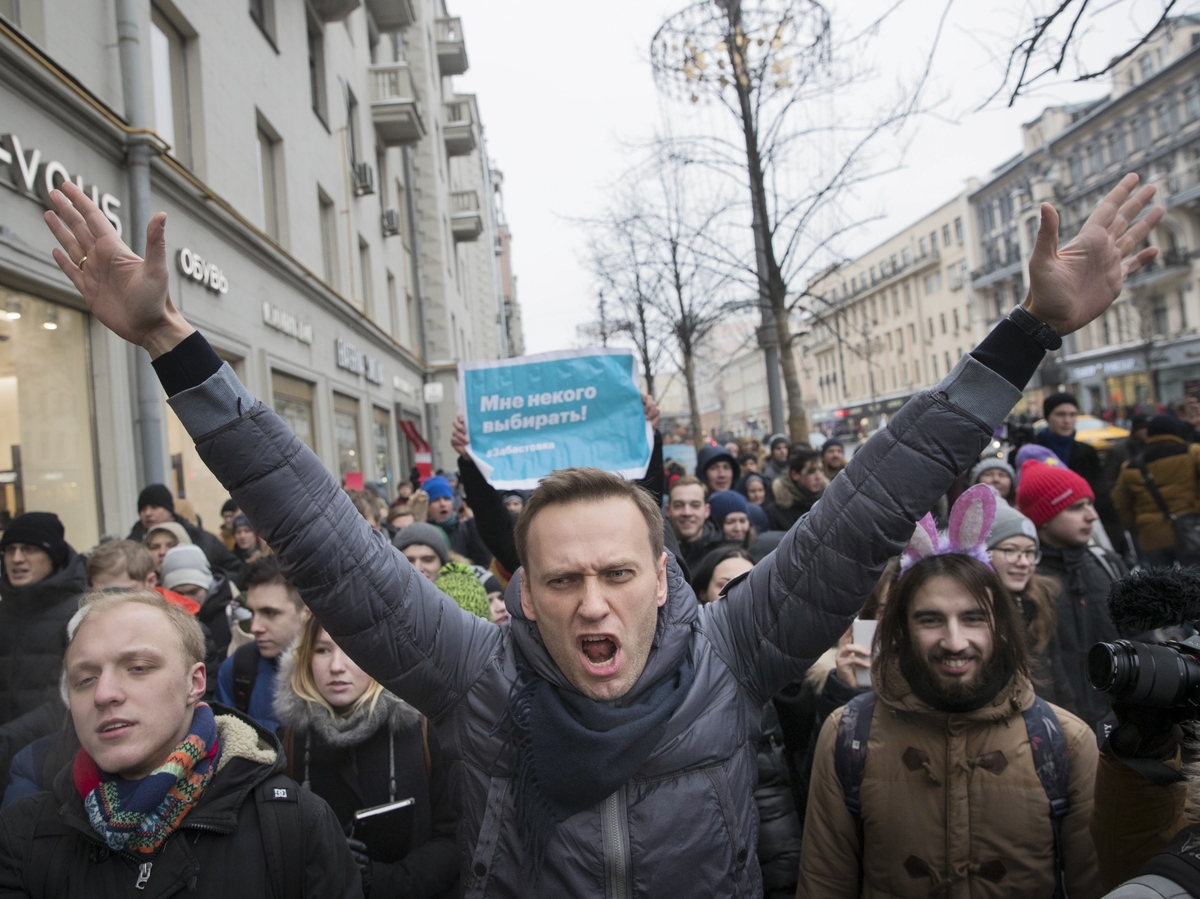 Russian opposition leader Alexei Navalny (center) attends a rally in Moscow on Sunday. Navalny was arrested while walking with protesters.

Russian opposition leader Alexei Navalny was briefly detained Sunday after a scuffle with police, who seized him amid protests in various cities calling for a boycott of the March 18 presidential election.

Navalny — a prominent Putin critic and anti-corruption campaigner who leads the country's Progressive Party and has been disqualified from running for president — was wrestled to the ground by police near a demonstration at Moscow's Pushkin Square.

In dramatic video from various sources, Navalny is seen rushed by uniformed police, who bring him down and then bundle him into a waiting police van.

Some 256 protesters across the country were similarly detained. The English-language Moscow Times said that rallies were held in about 100 cities across Russia.

The Moscow Times reports: "They marched in Vladivostok, in Russia's Far East, and they marched in Siberia's Irkutsk, braving subzero temperatures. They marched for fair and free elections, they said, and for an end to President Vladimir Putin's nearly two-decade-long rule."

"As long as I've been alive, Putin has always been in. I'm tired of nothing being changed," 19-year-old Vlad Ivanov, one of about 1,500 protesters who assembled in St. Petersburg, was quoted by The Associated Press as saying. 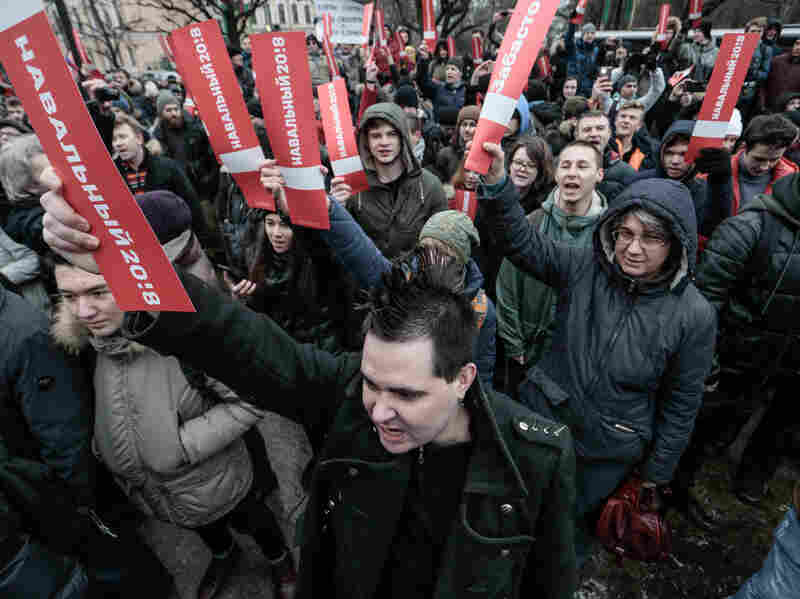 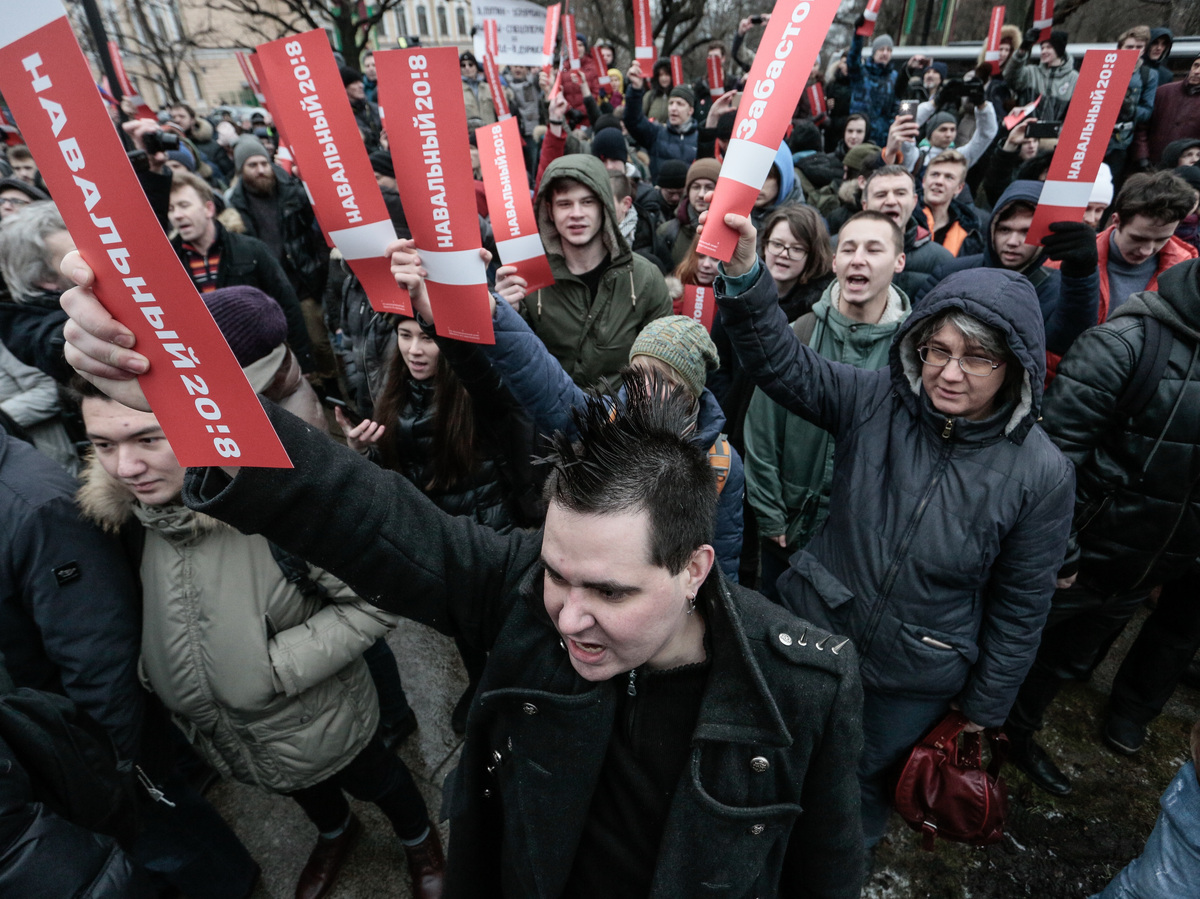 Supporters of Alexei Navalny at the rally "protest voters" in St. Petersburg, Russia, on Monday.

Navalny's lawyer told reporters that he had been released without charge but will have to appear in court later, according to the BBC. Earlier, police raided the opposition leader's office in Moscow.

Russian news reports cited by the AP said police had earlier indicated Navalny was likely to be charged with a public-order violation for calling unauthorized demonstrations.

Navalny has been barred from running in the March 18 election after a criminal conviction widely seen as politically motivated.

NPR's Lucian Kim, reporting from Moscow, tells Morning Edition that Navalny and his supporters believe that "by participating [in the March 18 vote] people are basically supporting unfair elections."

According to official polls, Putin, who is running for a fourth six-year term, enjoys an unassailable approval rating. A poll published in June showed that 87 percent of Russians surveyed expressed some or a lot of confidence in Putin's handling of international affairs and that 55 percent approved of his handling of the economy.

The AP writes: "No figures were available for how many people participated in the protests, but the turnout was clearly smaller than for rallies Navalny organized last year. The size and scope of the earlier protests, which took place in provincial cities regarded as the center of Putin's support, rattled the Kremlin."