Accessibility links
Drug Distributors Shipped 20.8 Million Painkillers To West Virginia Town Of 3,000 : The Two-Way Other towns were similarly inundated, in a state that now has the highest rate of drug overdose deaths. In 2008, one wholesaler provided 5,624 pills for every man, woman and child in Kermit, W.Va. 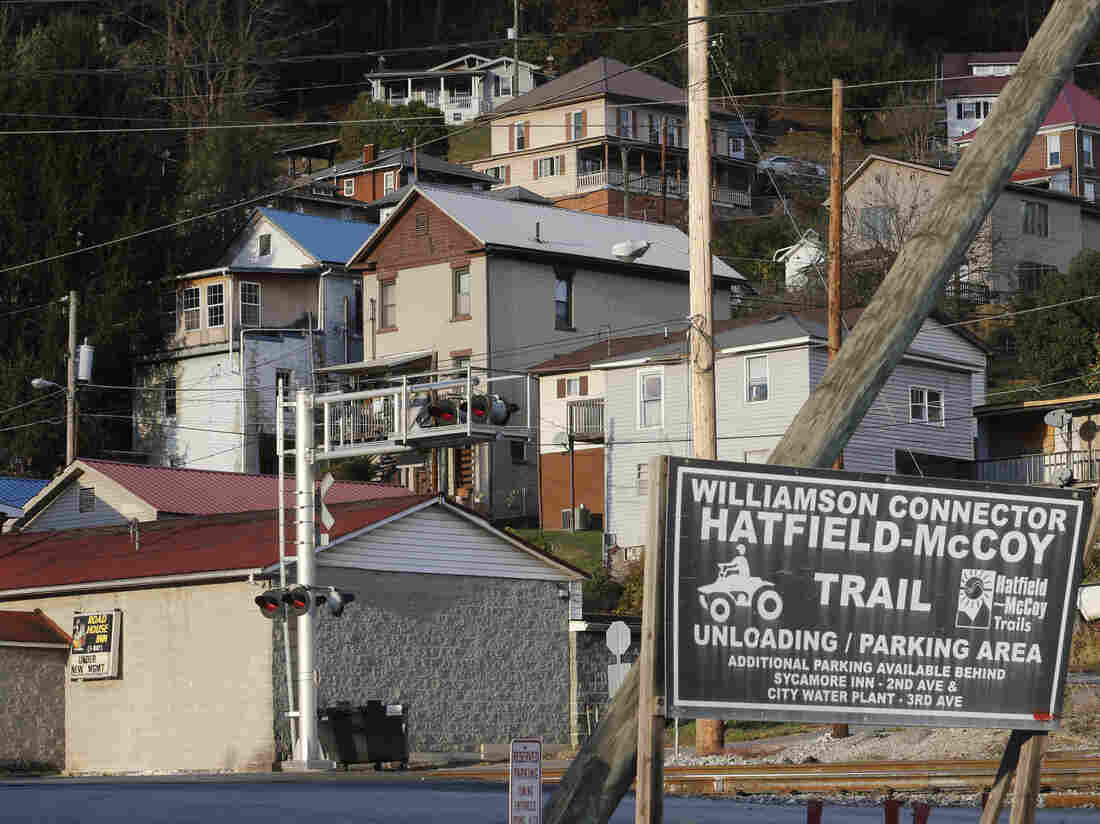 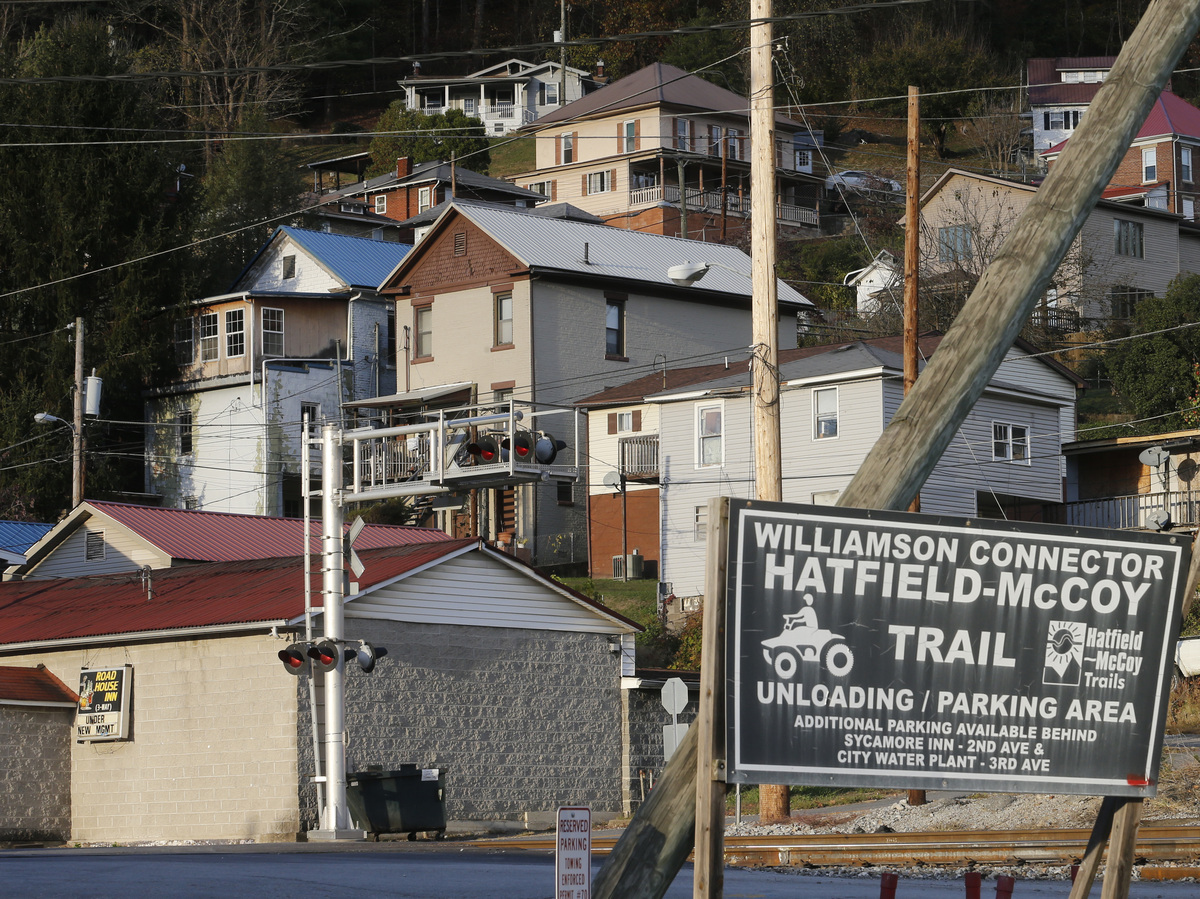 A House commerce committee investigation found that two drug wholesalers had sent more than 20 million pain pills to two pharmacies in the small town of Williamson, W.Va., seen in 2016.

Williamson, W.Va., sits right across the Tug Fork river from Kentucky. The town has sites dedicated to its coal mining heritage and the Hatfield and McCoy feud and counts just about 3,000 residents.

But despite its small size, drug wholesalers sent more than 20.8 million prescription painkillers to the town from 2008 and 2015, according to an investigation by the House Committee on Energy and Commerce. The opioids — hydrocodone and oxycodone pills — were provided to two pharmacies just four blocks apart.

"The committee's bipartisan investigation continues to identify systemic issues with the inordinate number of opioids distributed to small town pharmacies," they said in the statement. "The volume appears to be far in excess of the number of opioids that a pharmacy in that local area would be expected to receive."

The committee sent letters to two drug distributors asking why they sent so many pills and whether the spiking orders for the drugs raised any red flags at the companies.

The letter to Springfield, Ill.-based H.D. Smith says West Virginia court documents suggest that the company sent the two pharmacies a whopping 39,000 hydrocodone pills in a two-day period in 2007.

A pharmacy in the nearby town of Kermit was similarly inundated by pills from Miami-Luken, based in Springboro, Ohio.

In 2008, "Miami-Luken alone provided 5,624 pills for every man, woman, and child in Kermit," according to the committee's letter.

The committee notes that a doctor in another state, with offices two hours away, was responsible for prescribing 39 percent of all oxycodone pills at a pharmacy in tiny Oceana, W.Va. That pharmacy was provided 4.3 million of the painkillers by Miami-Luken from 2008 to 2015.

Richard Blake, outside counsel for Miami-Luken, said that because of ongoing litigation between the company and the Drug Enforcement Administration, it would not be appropriate to go into great detail on the matter.

"The info the committee has, they got from us, and we're fully cooperating with them," Blake told NPR. "The information goes back to 2008, 2009, 2010 — we're not hiding anything. They're high numbers, but it's much more complex. The company's got good management now. The committee's been good; they're just trying to get to the bottom of this."

In a statement to NPR, H.D. Smith said it "operates with stringent protection of our nation's healthcare supply chain. The company works with its upstream manufacturing and downstream pharmacy partners to guard the integrity of the supply chain, and to improve patient outcomes. The team at H.D. Smith will review the letter and will respond as necessary."

The CDC says that 884 people died of drug overdoses in West Virginia in 2016, the highest rate in the country. The center identifies opioids — both prescription and illicit — as the main driver of drug-overdose deaths.

The House committee's findings were first reported by Eric Eyre at Gazette-Mail, who won a Pulitzer Prize in April for his investigative reporting on how rural "pill mills" had fueled the West Virginia's opioid crisis. (The Gazette-Mail reported Monday that its owners were filing for Chapter 11 bankruptcy.)

Eyre reports that West Virginia has already settled lawsuits with the two companies:

"In February 2016, West Virginia Attorney General Patrick Morrisey ended a state lawsuit against Miami-Luken after the company agreed to pay $2.5 million to settle allegations that it flooded the state with painkillers. Morrisey, a former lobbyist for a trade group that represents Miami-Luken and other drug distributors, inherited the lawsuit in 2013 after ousting longtime Attorney General Darrell McGraw.

The House committee gave the companies until Feb. 9 to fulfill its request for information and give a briefing.

"We will continue to investigate these distributors' shipments of large quantities of powerful opioids across West Virginia, including what seems to be a shocking lack of oversight over their distribution practices," Walden and Pallone said in their statement. "These numbers are outrageous, and we will get to the bottom of how this destruction was able to be unleashed across West Virginia."