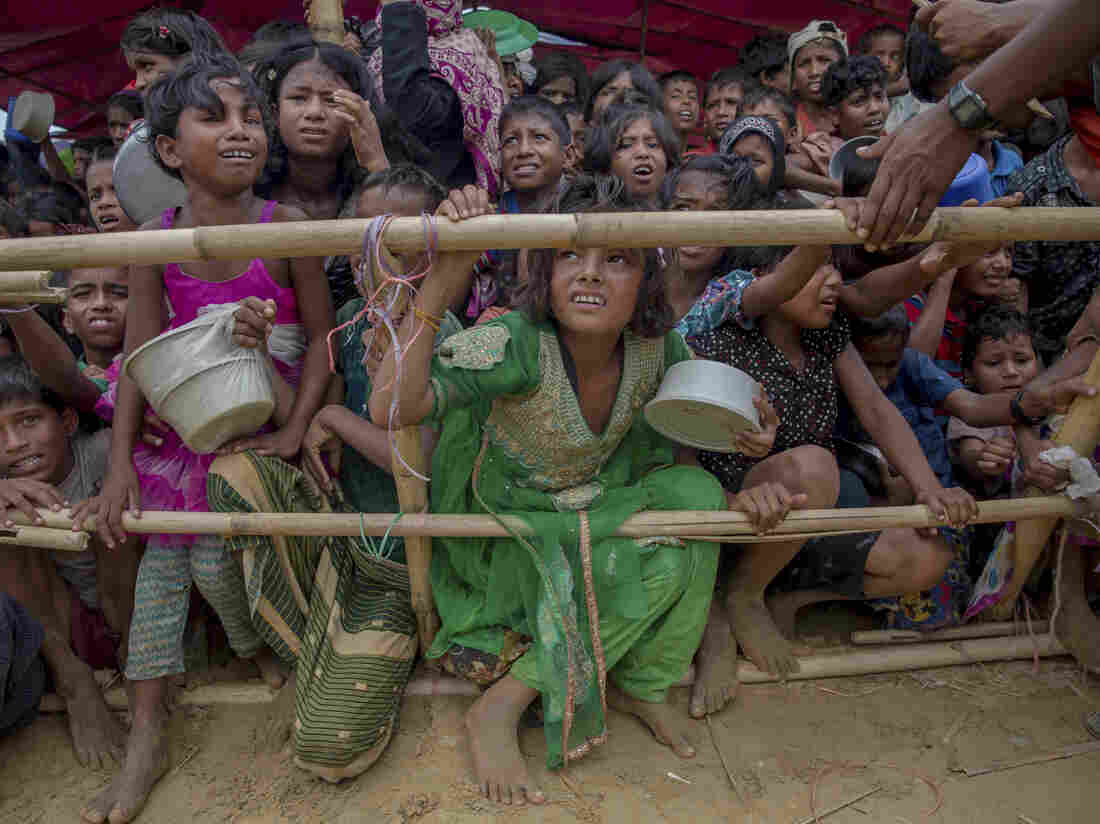 Rohingya Muslim children, who crossed over from Myanmar into Bangladesh, wait squashed against each other to receive food handouts distributed to children and women by a Turkish aid agency at Thaingkhali refugee camp, Bangladesh, in October. Dar Yasin/AP hide caption 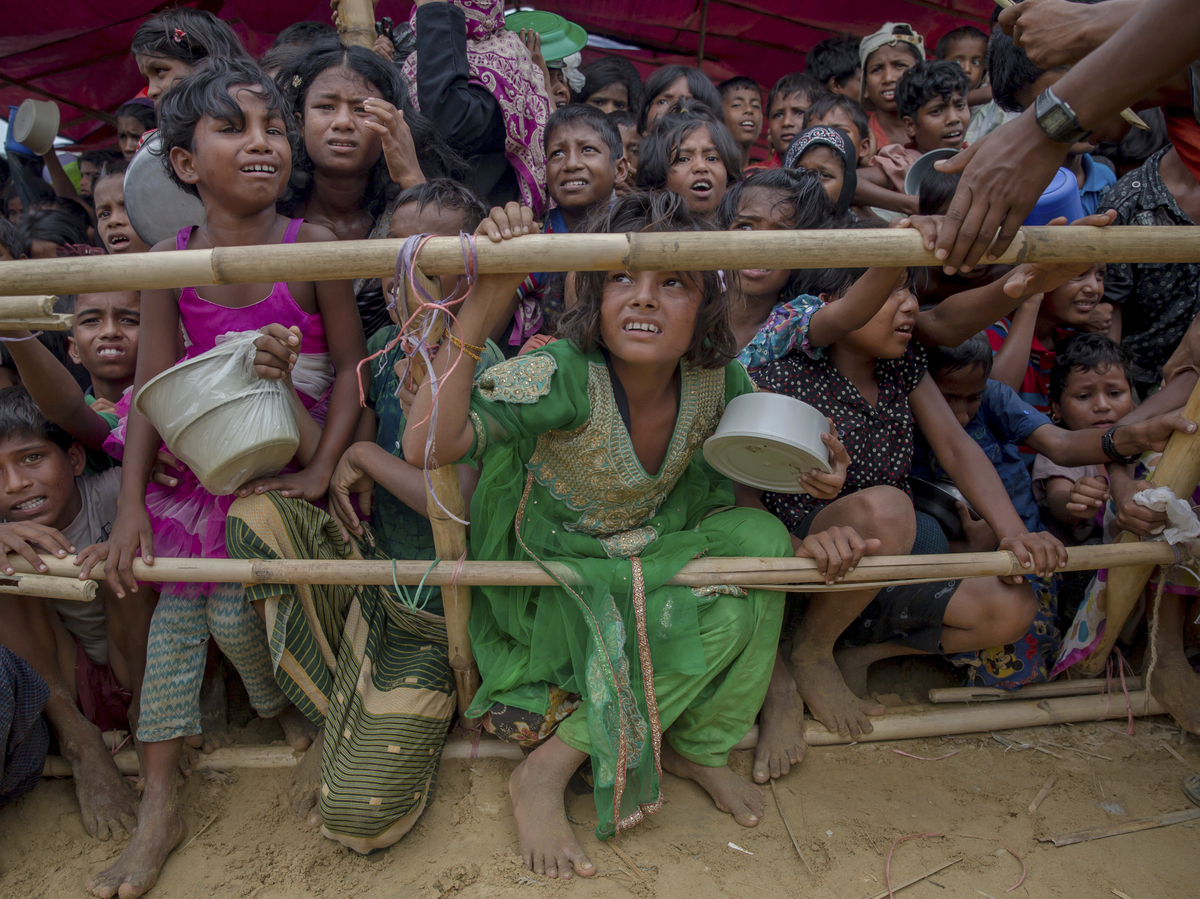 Rohingya Muslim children, who crossed over from Myanmar into Bangladesh, wait squashed against each other to receive food handouts distributed to children and women by a Turkish aid agency at Thaingkhali refugee camp, Bangladesh, in October.

The Associated Press on Wednesday published a report detailing the existence of several previously undisclosed mass graves of Rohingya Muslims in Myanmar along with shocking details of the systematic execution of victims and attempts to hide evidence of the crime.

The lengthy report by the AP's Foster Klug relied on interviews with more than two dozen refugees who managed to escape from soldiers and flee to neighboring Bangladesh at the start of a brutal military crackdown on the Rohingya in August. Some of the survivors provided the news agency with time-stamped cellphone videos supporting their claims.

The AP uncovered evidence of at least five mass graves at one location, Gu Dar Pyin, that bolster charges leveled by the U.S. and United Nations of ethnic cleansing in the country's northern Rakhine state.

About 200 soldiers, known as Tatmadaw, swept into the area on Aug. 27, according to witnesses. One of them, Mohammad Sha, 37, a shop owner and farmer, told the news agency that he "hid in a grove of coconut trees near a river with more than 100 others. They watched as the military searched Muslim homes and dozens of Buddhist neighbors, their faces partly covered with scarves, loaded the possessions they found into about 10 pushcarts. Then the soldiers burned down the homes, shooting anyone who couldn't flee, Sha said."

"Myanmar has cut off access to Gu Dar Pyin, so it's unclear just how many people died, but satellite images obtained by the AP from DigitalGlobe show a village decimated. Community leaders have compiled a list of 75 dead so far, and villagers estimate the toll could be as high as 400, based on testimony from relatives and the bodies they've seen in the graves and strewn about the area."

Almost every villager interviewed by the AP saw three large mass graves at Gu Dar Pyin's northern entrance, near the main road, where witnesses say soldiers herded and killed most of the Rohingya. A handful of witnesses confirmed two other big graves near a hillside cemetery, and smaller graves scattered around the village."

The AP says cellphone video shot by survivors show "blue-green puddles of acid sludge [surrounding] corpses without heads and torsos that jut out from the earth, skeletal hands seeming to claw at the ground."

Local officials contacted by the news agency claim to know nothing of mass graves and Myanmar's government has repeatedly denied any organized campaign against the Rohingya. 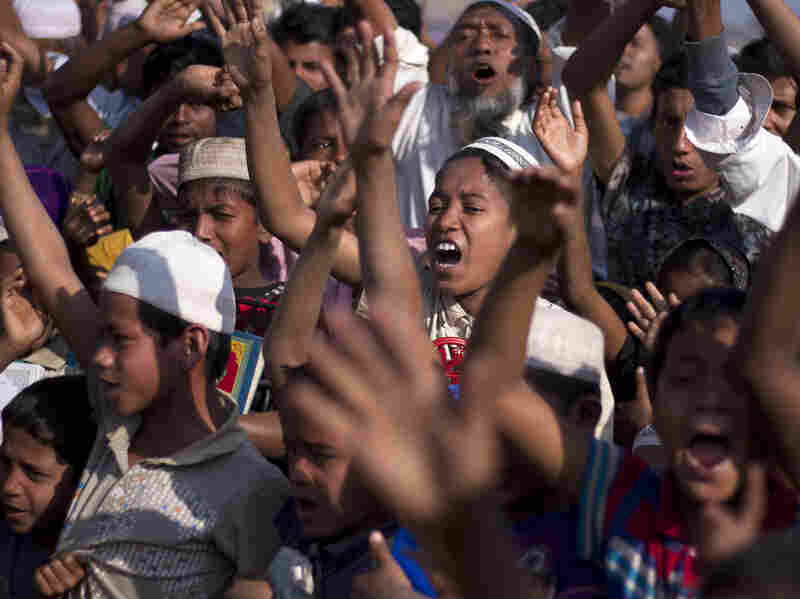 Rohingya children and refugees raise their hands and shout that they won't go back to Myanmar during a demonstration at Kutupalong near Cox's Bazar, Bangladesh, last month. Manish Swarup/AP hide caption 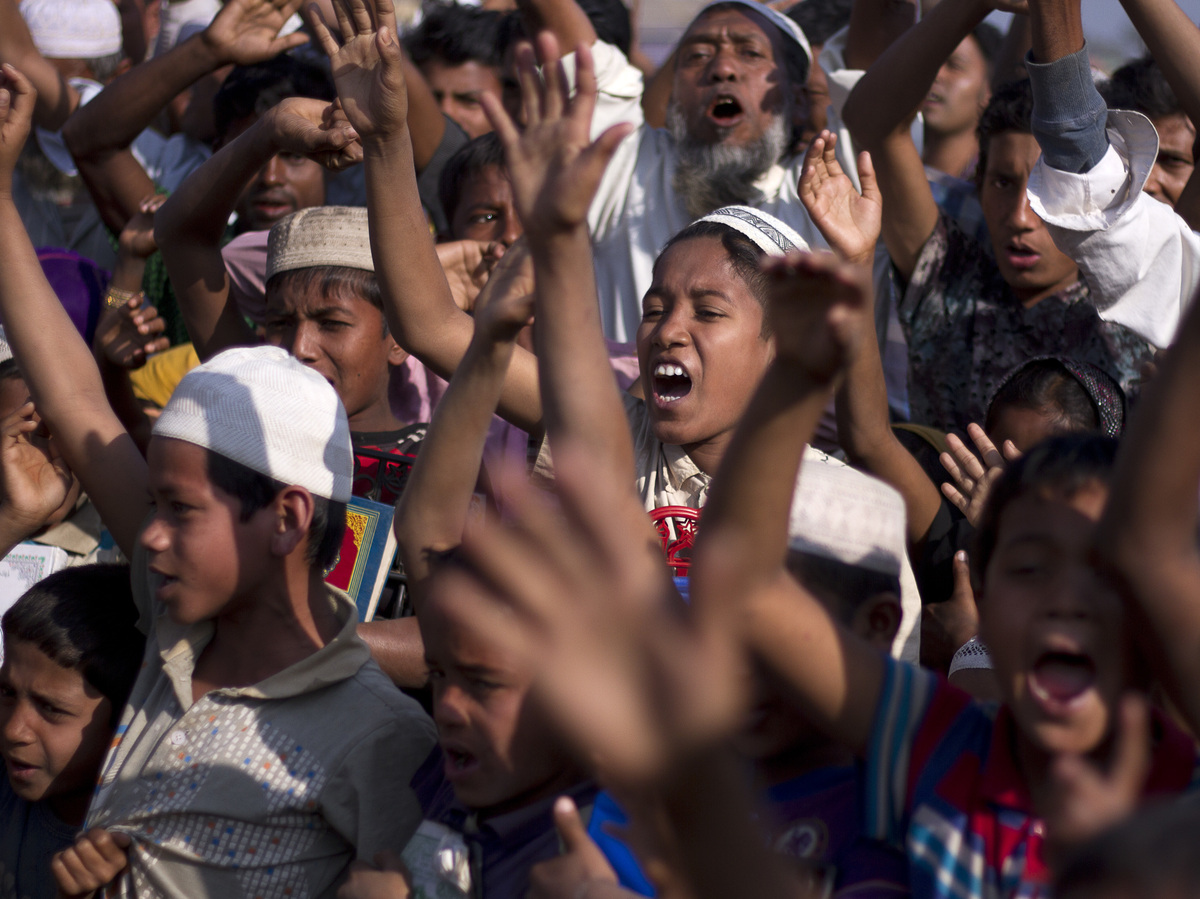 Rohingya children and refugees raise their hands and shout that they won't go back to Myanmar during a demonstration at Kutupalong near Cox's Bazar, Bangladesh, last month.

The International Organization for Migration estimates that 688,000 Rohinghya have fled Myanmar since August.

Last year, Doctors Without Borders said it believed that 6,700 Rohingya were killed in a single one-month period following the crackdown.

Matthew Smith of the aid group Fortify Rights, speaking with Michael Sullivan, who reports from Asia for NPR, says his group has been documenting mass graves in Rakhine since 2016.

He said the group had not specifically documented the use of acid to dissolve bodies, but had collected evidence of soldiers "cutting bodies up" and "burning piles of bodies."

"[The] pre-planning aspect of this would be consistent with what we found in other places" in Rakhine, Smith says.

Phil Robertson, the deputy Asia director for Human Rights Watch, said it is time for the U.S. and the European Union to "get serious" about identifying culprits in Myanmar's military.

He said the AP's reporting "raises the stakes for the international community to demand accountability from Myanmar."

"The AP's report that Tatmadaw soldiers brought along to Gu Dyar Pin village containers of acid to disfigure the bodies and make identification more difficult is particularly damning because it shows a degree of pre-planning of these atrocities," Robertson said.

The plight of the Rohingya — long a persecuted minority in Myanmar — has brought international scrutiny to the government of Aung San Suu Kyi, a Nobel Peace Prize winner who is nonetheless accused of ignoring massacres carried out by her country's military.

In January, Myanmar and Bangladesh agreed to a two-year timeframe for the repatriation of Rohingya Muslims housed in sprawling camps, despite deep concerns voiced by international aid groups and the refugees themselves.