Accessibility links
Woman Reported Missing In California Found On 'The Bachelor' : The Two-Way Police in Humboldt County did not have to look far to remove Rebekah Martinez from their missing persons list; she has been appearing on TV weekly since Jan. 1. 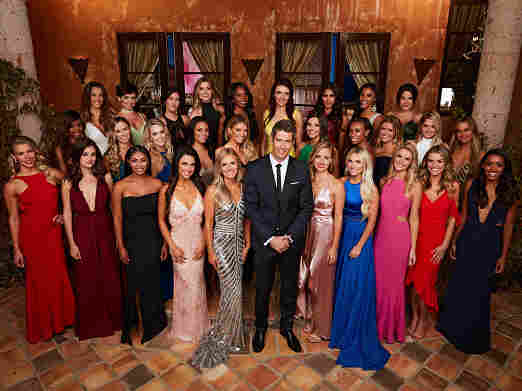 In this picture of the cast of the 22nd season of ABC's hit romance reality series "The Bachelor," Rebekah Martinez, known as "Bekah M" on the show, is second from left in the back row. Craig Sjodin/ABC via Getty Images hide caption 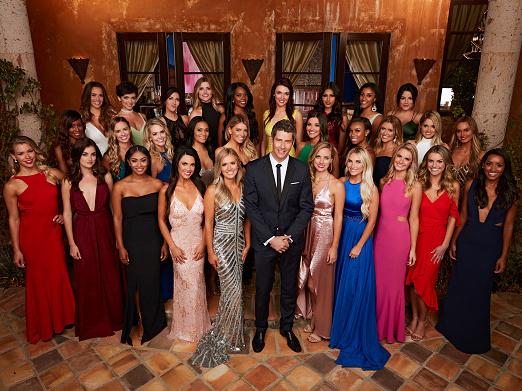 In this picture of the cast of the 22nd season of ABC's hit romance reality series "The Bachelor," Rebekah Martinez, known as "Bekah M" on the show, is second from left in the back row.

Intrigue around The Bachelor, ABC's long-running dating reality show, usually centers on rendered roses and resentful rivals, but one contestant on the current season made headlines this week for different reasons.

Rebekah Martinez, 22, has been seen weekly on television screens since Jan. 1, when the season debuted, and yet had also simultaneously been registered as a missing person in California's Humboldt County. That is until astute viewers and the local newspaper helped set the record straight on Thursday.

On Nov. 18, Martinez's mother called the Humboldt County Sheriff's Office to file a missing person's report, saying she had not heard from her daughter for a week, reports the North Coast Journal.

A sheriff's spokesperson told the newspaper that Martinez told her mother that she was going to Humboldt County to work on a marijuana farm.

After trying to get ahold of Martinez and following up on leads, police asked Martinez's mother on Dec. 12 whether she had made contact with her daughter, reports People magazine. The mother, who has not been identified, said she did in fact hear from her daughter on Nov. 18 after reporting her missing. But Martinez was never removed from the missing persons list. Per procedure, police asked for Martinez to contact the investigator directly, the magazine reports. That didn't happen.

Martinez posted on Instagram on Sept. 17 — presumably around the time filming began for the 22nd season of the show — that she was giving up her "phone and social media for the next several weeks, so if you need to contact me, welll... tough luck!"

But far from flying under the radar, she resumed activity on social media in November, four days after her mother reported her missing and has continued posting regularly.

Yet on Thursday, Humboldt County's North Coast Journal published a cover story including Martinez as one of "The Humboldt 35." The article explored why the county has California's highest rate of reported missing persons.

After the newspaper posted the article to Facebook, readers pointed out that not only was Martinez not missing, but also she was a burgeoning reality television star, known as Bekah M., currently among the top 10 contestants whittled down from the original 29.

After the Journal contacted the sheriff's office with the news, a deputy managed to get in touch with Martinez. The deputy said in an email, according to the newspaper, "I just got off the phone with Rebekah. She is in fact the same person. She has been removed from (the Missing and Unidentified Persons Unit)."

The Humboldt 35 is now down to 33 after at least one other person was surprised to read he was officially missing. He called the newspaper to say he was alive and well and still living in the county with a roommate.

In California, a missing person is simply "someone whose whereabouts is unknown to the reporting party," as the state's Office of the Attorney General explains. "There is NO waiting period for reporting a person missing. All California police and sheriffs' departments must accept any report, including a report by telephone, of a missing person."

While Martinez has not explained the confusion directly, she did address it lightheartedly on Friday, tweeting, "honestly the scariest thing about this story is that my efforts to conceal The Worst Drivers License Photo Of All Time have been thwarted."

honestly the scariest thing about this story is that my efforts to conceal The Worst Drivers License Photo Of All Time have been thwarted https://t.co/z0venho66p

A caption on a previous version of this story incorrectly spelled Rebekah Martinez's first name as Rebecca. In addition, we incorrectly said there were two dozen contestants on Season 22 of The Bachelor. There were 29.