Accessibility links
South Korea Tries To Stamp Out Olympics Norovirus Outbreak : The Two-Way With days to go until the opening ceremony, the Winter Olympics host quarantined some 1,200 security workers after several dozen of them showed symptoms of infection. Soldiers are taking their place. 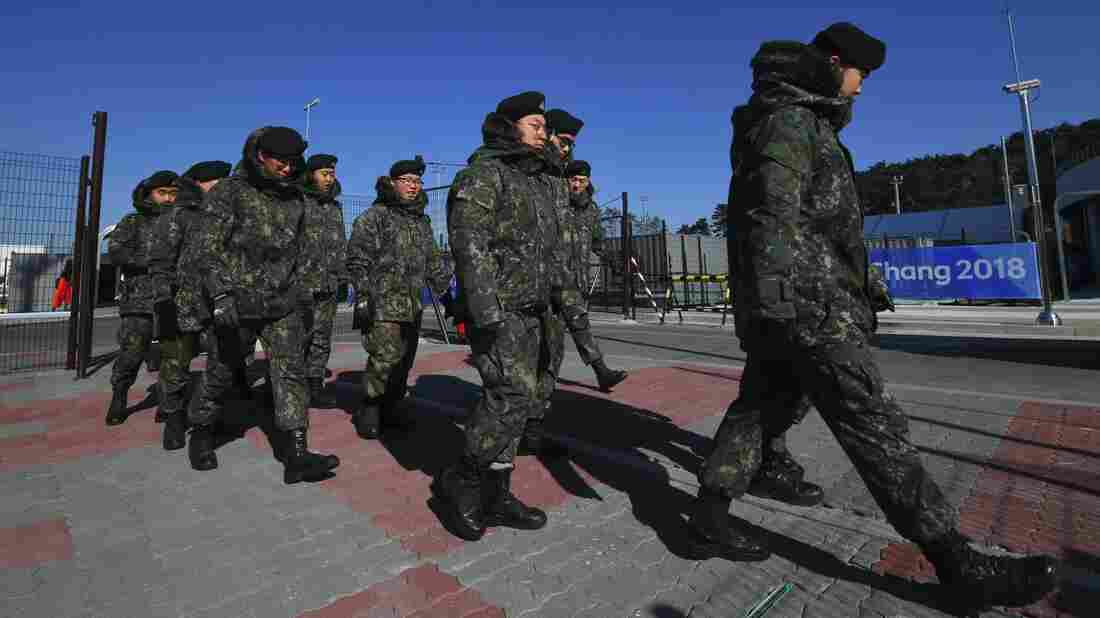 South Korean soldiers walk past a security checkpoint Tuesday in Pyeongchang, where they have been replacing security guards who showed symptoms of the norovirus. Jung Yeon-Je/AFP/Getty Images hide caption

South Korean soldiers walk past a security checkpoint Tuesday in Pyeongchang, where they have been replacing security guards who showed symptoms of the norovirus.

It won't be long before South Korea kicks off its grand turn on the world stage, but the specter of illness is already haunting the Winter Olympics in Pyeongchang. Organizers have removed some 1,200 security personnel from their posts and quarantined them in their rooms after several dozen tested positive for norovirus.

The nasty stomach bug — which often results in vomiting, diarrhea and just a general sense of extreme gastric discomfort — has depleted the ranks of security staff on site, prompting organizers to seek out temporary replacements.

"To address the shortfall in security workforce due to the isolation, 900 military personnel have been deployed to take over the work of the civil safety personnel," the Olympic organizing committee said in a statement quoted by The Associated Press. "They will work across 20 venues until all affected workforce are able to return to duty."

Just How Cold Is It At The Pyeongchang Winter Olympics?

The International Olympic Committee said it is also distributing leaflets to the general population detailing proper measures for virus prevention and treatment.

The IOC's executive director for the Olympic Games, Christophe Dubi, told reporters they are taking no risks in the bid to contain the outbreak to prevent it from disrupting athletes and spectators.

"We don't know exactly what the source was," he said at a news conference Tuesday, according to the Korean news service Yonhap, "but when it comes to the food and beverage the whole chain of securing the quality of food, they are definitely respecting all international standards."

The U.S. Centers for Disease Control and Prevention explains norovirus is highly contagious, often spread through physical contact or contaminated food. It is behind some 685 million suspected cases worldwide per year, and though it poses mortal danger to only a very small percentage of the population, it is nevertheless a highly unpleasant and dehydrating illness — one that would likely prove fatal to the medal aspirations of an infected Olympian, at least.

Just six months ago, at the world athletics championships in London, at least 30 athletes — hailing from national teams from Germany to Botswana — came down with norovirus. Several of those infected had to withdraw from their events.

"They're really making the ultimate possible effort to make sure that everybody is aware," Dubi said, "and where there are cases, that the right measures are taken."