Accessibility links
Reuters Publishes Story Of Myanmar Massacre After 2 Journalists Arrested : The Two-Way Wa Lone and Kyaw Soe Oo have been detained by Myanmar since December. Now you can read the story they were working on, describing in detail the killing of 10 Rohingya men by villagers and troops. 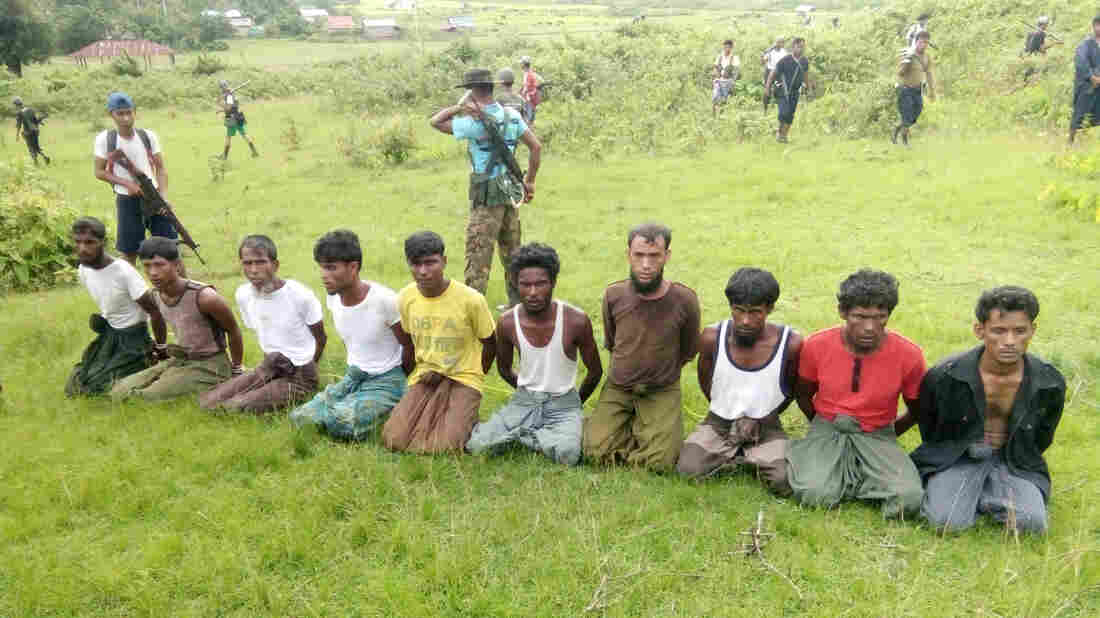 Ten Rohingya Muslim men kneel with their hands bound as members of the Myanmar security forces stand guard in Inn Din village on Sept. 2, 2017. The photo has been published as part of an extensive Reuters investigation into the massacre of the 10 men, who were fishermen, shop owners, high school students and an Islamic teacher. Reuters hide caption 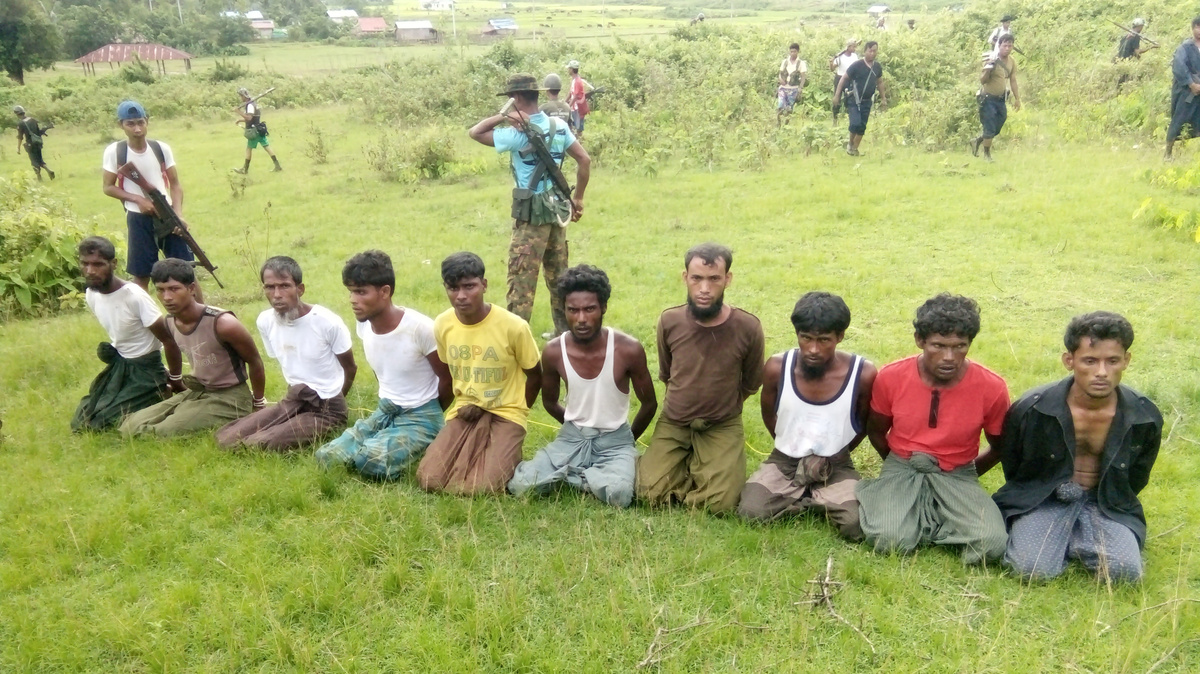 Ten Rohingya Muslim men kneel with their hands bound as members of the Myanmar security forces stand guard in Inn Din village on Sept. 2, 2017. The photo has been published as part of an extensive Reuters investigation into the massacre of the 10 men, who were fishermen, shop owners, high school students and an Islamic teacher.

Reuters has published an extensive report into the killing of 10 Rohingya men in Myanmar in September, pulling from photographs and eyewitness accounts to describe how villagers and paramilitary forces killed the men execution-style and buried them in one grave.

The investigation made headlines long before it was published.

While working on the story, two Reuters journalists were arrested by Myanmarese authorities and accused of violating the Official Secrets Act. The men, Wa Lone and Kyaw Soe Oo, have been detained since December and face up to 14 years in prison.

The journalists' detention has prompted outcry from governments and human rights groups around the world. Reuters says the two men are innocent of wrongdoing and were arrested for doing their jobs, as "journalists who perform a crucial role in shedding light on issues of global interest."

Now the world can see the results of their work in "Massacre in Myanmar," the story published by Reuters overnight.

Wa Lone, Kyaw Soe Oo, Simon Lewis and Antoni Slodkowski describe how in early September, paramilitary troops and Buddhist villagers tied 10 men together and killed them with machetes and gunfire.

For months, the persecuted Rohingya Muslim minority group in Myanmar has been targeted in a wave of violence that the United States has denounced as "ethnic cleansing." In a single month, more than 6,700 Rohingya Muslims were killed in Rakhine state, where the conflict erupted, according to Doctors Without Borders.

Hundreds of thousands of refugees have fled the violence, setting up in makeshift shelters in camps in Bangladesh. The conditions in those camps are dire, as NPR's Jason Beaubien has been reporting.

Those refugees have shared credible stories of horrifying massacres, systematic rapes by soldiers, and the burnings of entire villages.

And last week, The Associated Press published a report on the use of mass graves to conceal systematic executions of Rohingya prisoners, pulling from photographs and testimony from refugees.

The new Reuters story, in its graphic, disturbing content, is in line with the previous accounts of atrocities in Rakhine state.

But the sourcing of the Reuters report is unusual, as the news organization notes:

"Until now, accounts of the violence against the Rohingya in Rakhine state have been provided only by its victims. The Reuters reconstruction draws for the first time on interviews with Buddhist villagers who confessed to torching Rohingya homes, burying bodies and killing Muslims.

"This account also marks the first time soldiers and paramilitary police have been implicated by testimony from security personnel themselves. Members of the paramilitary police gave Reuters insider descriptions of the operation to drive out the Rohingya from Inn Din, confirming that the military played the lead role in the campaign.

"The slain men's families, now sheltering in Bangladesh refugee camps, identified the victims through photographs shown to them by Reuters. The dead men were fishermen, shopkeepers, the two teenage students and an Islamic teacher."

Reuters was provided photos of the execution by a Buddhist village elder who said he wanted transparency, to prevent such killings in the future. The team of journalists managed to identify all 10 of the men in the photos and talk to their families and neighbors.

The story also includes photographs of the mass grave site that were taken by Wa Lone.

You can read more, and see the images essential to reporting the story, here.

Myanmar's military has acknowledged the killing of the 10 men — an announcement that is, in itself, an unusual step,

"That's why the military has acknowledged the existence of this mass grave — because they knew the photos were out there," reporter Michael Sullivan told NPR in December.

But the military says that the men were killed after a massive attack on Myanmarese troops.

That does not match any account of the killings that Reuters heard from paramilitary forces or local villagers.

Instead, the men had been selected from hundreds of Rohingya men, women and children who fled the systematic torching of their village and sought safety on a beach, witnesses told Reuters.