Accessibility links
Israeli Airstrikes Kill 6 In Syria After Israel Says It Intercepted Iranian Drone : The Two-Way Israel said it attacked several targets in Syria after intercepting an Iranian drone that had been launched from Syria. A monitor group said at least six allies of the Syrian regime were killed. 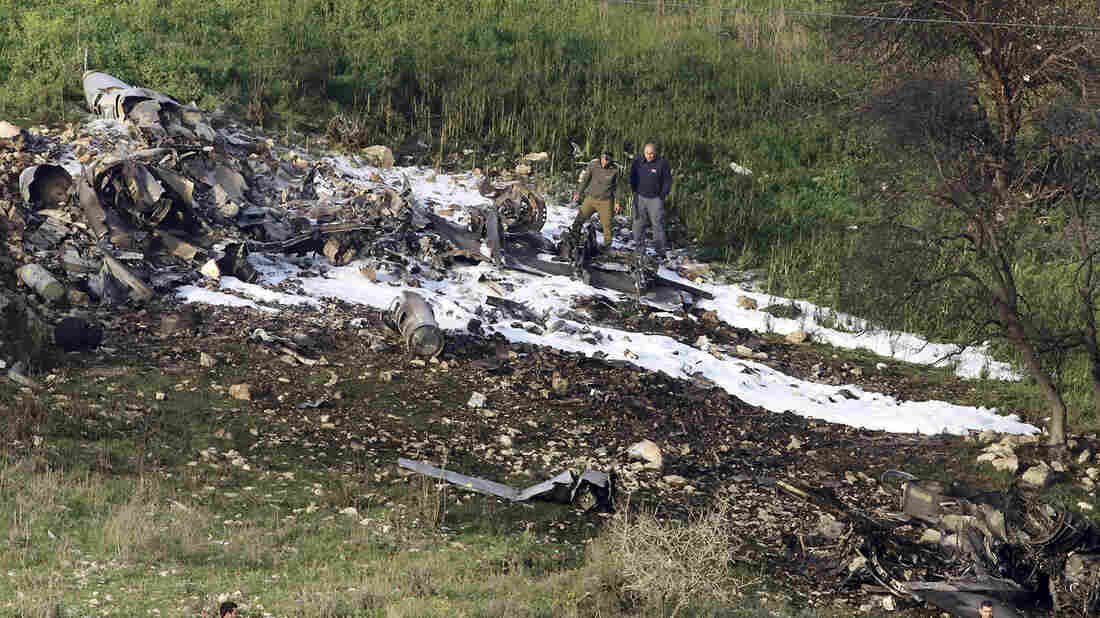 Israeli security stands around the wreckage of an F-16 that crashed in northern Israel on Saturday. The Israeli military shot down an Iranian drone it said infiltrated the country before launching attacks on at least a dozen Iranian and Syrian targets inside Syria. Rami Slush/AP hide caption 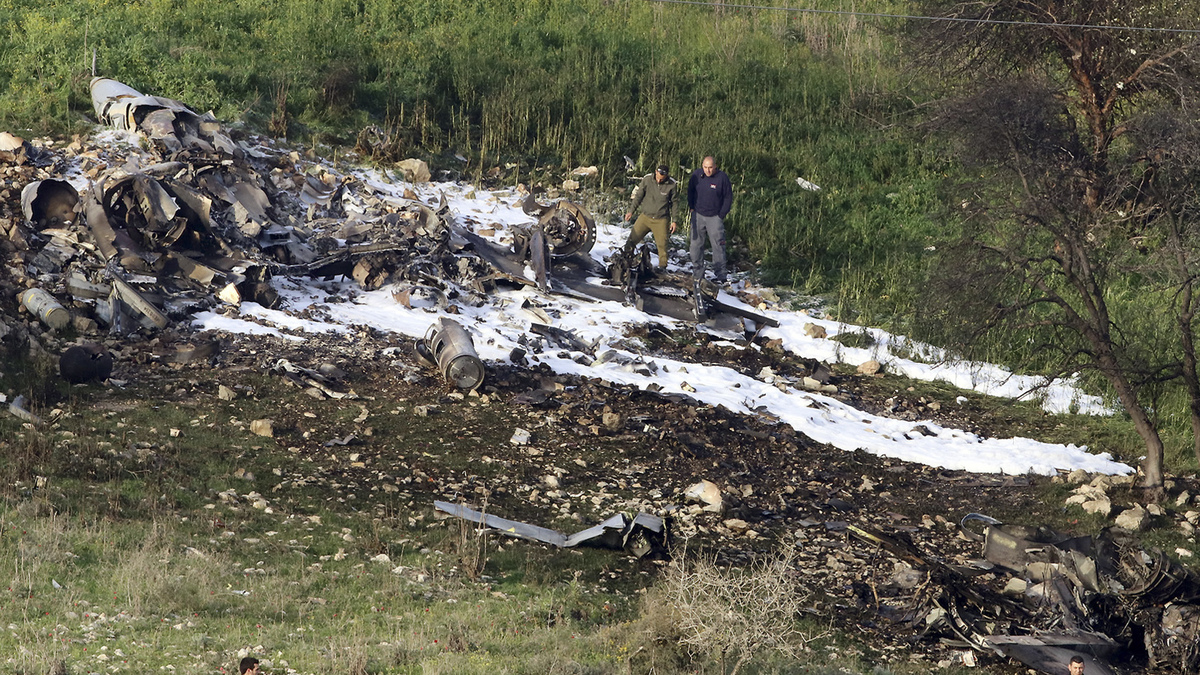 Israeli security stands around the wreckage of an F-16 that crashed in northern Israel on Saturday. The Israeli military shot down an Iranian drone it said infiltrated the country before launching attacks on at least a dozen Iranian and Syrian targets inside Syria.

"Israel holds Iran and its Syrian hosts responsible for today's aggression," Israeli Prime Minister Benjamin Netanyahu said in a statement Saturday. "We will continue to do whatever is necessary to protect our sovereignty and our security."

Iran denied that Israel had shot down its drone. Syria's state-backed news agency SANA quoted the "Operations Room" — run by Syria, Iran, Hezbollah and Russia — as calling the account "sheer lies" and said it did not enter Israel's airspace.

Israel said its aircraft targeted 12 sites in Syria in response to the Iranian drone, launched from Syria, infiltrating its airspace earlier Saturday. An Israeli Apache helicopter was able to intercept the drone, after detecting it "early on" and placing it under surveillance, according to the Israel Defense Forces.

The Britain-based Syrian Observatory of Human Rights said six fighters loyal to the Syrian regime of Bashar Assad were killed in the attacks, and that the death toll could increase with more people in critical condition.

An Israeli fighter jet that was part of a squadron launching the airstrikes on Syria was downed amid anti-aircraft missile fire, said the IDF.

Original footage showing #Iranian UAV infiltrating and then shot down over Israel, and #IDF strike on Iranian command vehicle in #Syria pic.twitter.com/Sz6poAOdjc

Israel said several of the sites it targeted on Saturday "are part of Iran's military establishment in Syria."

The two pilots of the Israeli F-16 ejected before it crashed in northern Israel; both were reported as "safe" but one was left seriously injured.

The incident, which triggered sirens in the northern Golan Heights, is believed to be Israel's most significant involvement in Syria since the war began there some seven years ago.

"The Syrians are playing with fire when they allow the Iranians to attack Israel from their soil," said Lt. Col. Jonathan Conricus, a spokesman for the Israeli military, in a statement. "We are willing, prepared, and capable to exact a heavy price on anyone that attacks us. However, we are not looking to escalate the situation."

Iran dismissed Israel's claims that Israeli forces downed one of its drones and that Iran was involved in an attack. Its Foreign Ministry Spokesman Bahram Qasemi called the claims "ridiculous," according to Reuters.

Iran denies having conventional armed forces in Syria, reports the wire service. Qasemi went on to say, "Iran only provides military advice to Syria based on the request of the country's legitimate government." 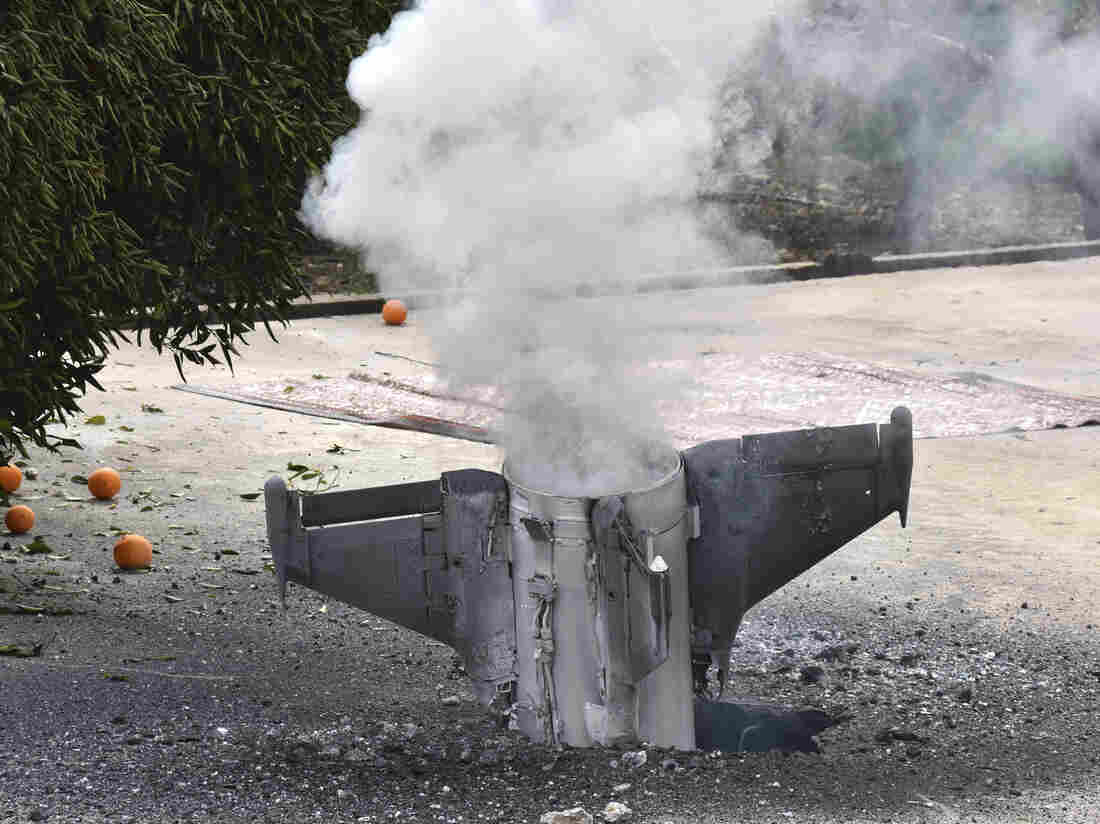 Smoke rises from a missile in southwest Lebanon, which the Lebanese National News Agency says was fired by Israel toward Syria. STR/AP hide caption 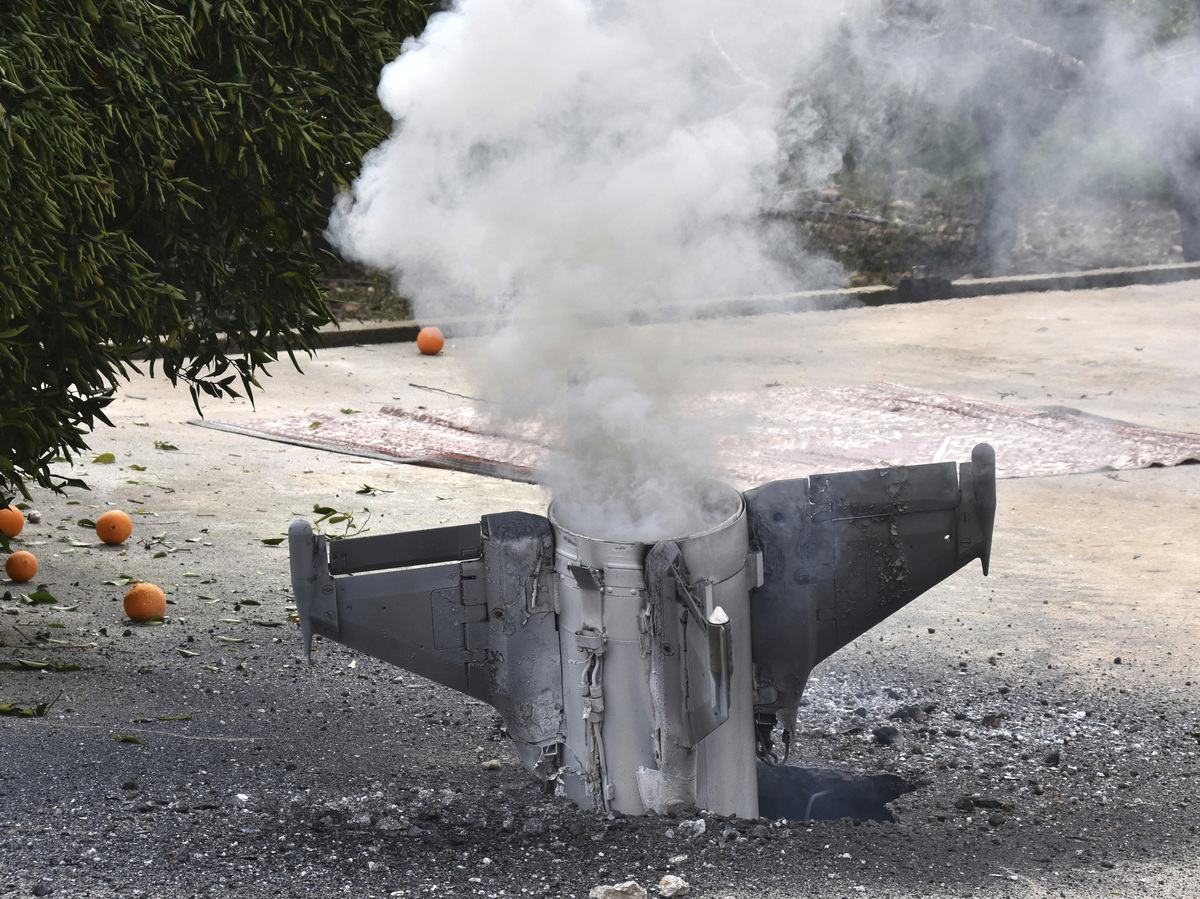 Smoke rises from a missile in southwest Lebanon, which the Lebanese National News Agency says was fired by Israel toward Syria.

For its part, Russia, which has troops in Syria aiding President Bashar Assad in what it calls "the fight against terrorists," expressed concern over the escalations.

"We urge all parties involved to exercise restraint and to avoid any actions that could lead to an even greater complication of the situation," Russia's Foreign Ministry said in a statement. "We consider it necessary to unconditionally respect the sovereignty and territorial integrity of Syria and other countries of the region."

Neighboring Lebanon said it will file a complaint with the United Nations Security Council over Israel's use of its airspace to launch attacks on Syria.

"Such an aggressive policy practiced by Israel threatens stability in the region," said its Foreign Ministry in a statement. "The Ministry calls on the countries concerned to curb the Israeli practices and stop its attacks."

Hezbollah, a Lebanese Islamist political party and militant group, said in a statement that the downing of the Israeli jet marks the "start of a new strategic phase."

The statement went on to say, "Today's developments mean the old equations have categorically ended."

Conricus, IDF spokesman, maintains Iran is the aggressor and Israel's military is "ready for all scenarios."