Accessibility links
Tillerson Tries To Ease Tension With Turkey : The Two-Way The U.S. and Turkey differ over Syria. The U.S. supports and arms Kurdish fighters in northern Syria, seeing them as key allies against ISIS. Turkey considers them terrorists. 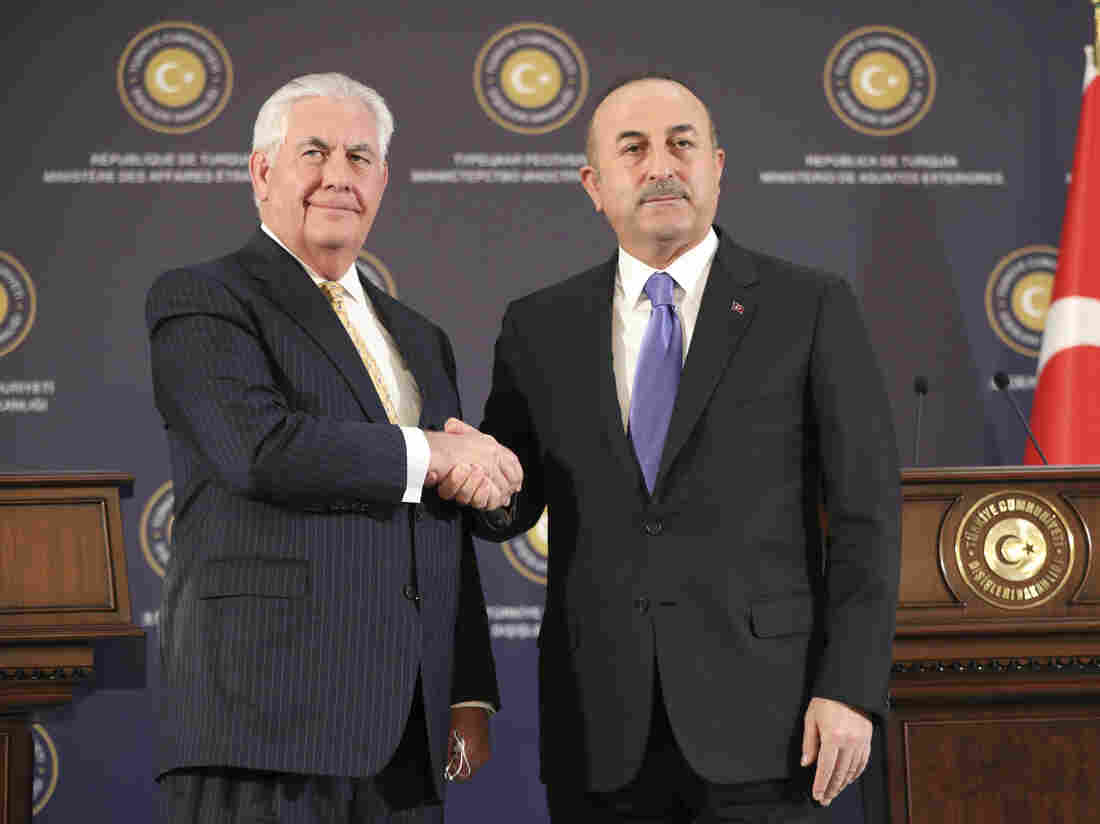 There are signs of thawing in the tense relationship between the U.S. and Turkey, as U.S. Secretary of State Rex Tillerson visits Turkey's capital, Ankara, and holds lengthy talks with leadership.

The central rift between the two countries is over Syria. The U.S. supports and arms Kurdish fighters in northern Syria, seeing them as key allies against ISIS. Turkey describes them as terrorists.

"We have always been clear with Turkey that the weapons provided to the Syrian Democratic Forces would be limited, mission-specific, and provided on an incremental basis to achieve military objectives only," Tillerson said at a press briefing with Turkish Foreign Minister Mevlut Cavusoglu.

He stated that Turkey and the U.S. "share the same objectives in Syria – the defeat of ISIS ... secure and stable zones, and an independent and unified Syria."

Mevlut Cavusoglu said, "We've reached an understanding to normalize our relations [with the U.S.]," according to state news agency Anadolu.

It's not clear precisely what kind of understanding was reached in Ankara. "We agreed to establish some mechanisms which will cover and evaluate all the issues," Cavusoglu said.

NPR's Peter Kenyon reports that a Turkish official stated "that Ankara is proposing that the [Kurdish] YPK fighters move to the Eastern side of the Euphrates river, and joint U.S. and Turkish patrols should secure the border area."

He adds that Turkey's frustration with U.S. support of the Kurdish fighters prompted a military operation to clear them from an area near Turkey's border. Here's more from Peter:

"Turkish officials bluntly warned U.S. military forces in Syria to distance themselves from YPG units or risk getting caught up in the fighting, warning they might receive an 'Ottoman slap.' U.S. military officers in Syria said if attacked, they would respond, but did not say they planned to be moving anywhere.

"U.S. officials said they respect Turkey's security concerns, but the military operation has hampered the anti-ISIS effort in Syria."

There was another development Friday in Turkey's diplomatic relations, this time with Germany. A German-Turkish journalist, who has been detained in Turkey since February 2017 over alleged "terrorist propaganda," is set to be released pending trial.

Tensions Escalate Between Turkey And Germany

Deniz Yucel, a correspondent for the newspaper Die Welt, has written articles critical of the Turkish government, which has a record of detaining journalists. A Turkish court accepted his indictment today and he could face up to 18 years in prison if convicted, Anadolu reported.

However, he might be able to fly out of Turkey before the trial begins. According to Reuters, German Foreign Minister Sigmar Gabriel said, "I believe that this will lead to (Yucel) being able to leave the country... I hope this will happen very soon."

As NPR's Lauren Frayer reported, Yucel got married in April during visitation hours at the Turkish prison.

"When we got married, it was the first time I'd seen Deniz in 43 days. During that period, I never heard his voice, never got any message from him," his wife Dilek Mayaturk Yucel told Lauren. "He's alone, in isolation. But he's such a strong person. He knows he didn't do anything other than his job."