Accessibility links
'Black Panther' Breaks Records And Barriers In Debut Weekend : The Two-Way Steeped in cultural significance, the film opened to $192 domestically, the biggest February debut ever, said Disney. It's also already the highest-grossing film by a black director. 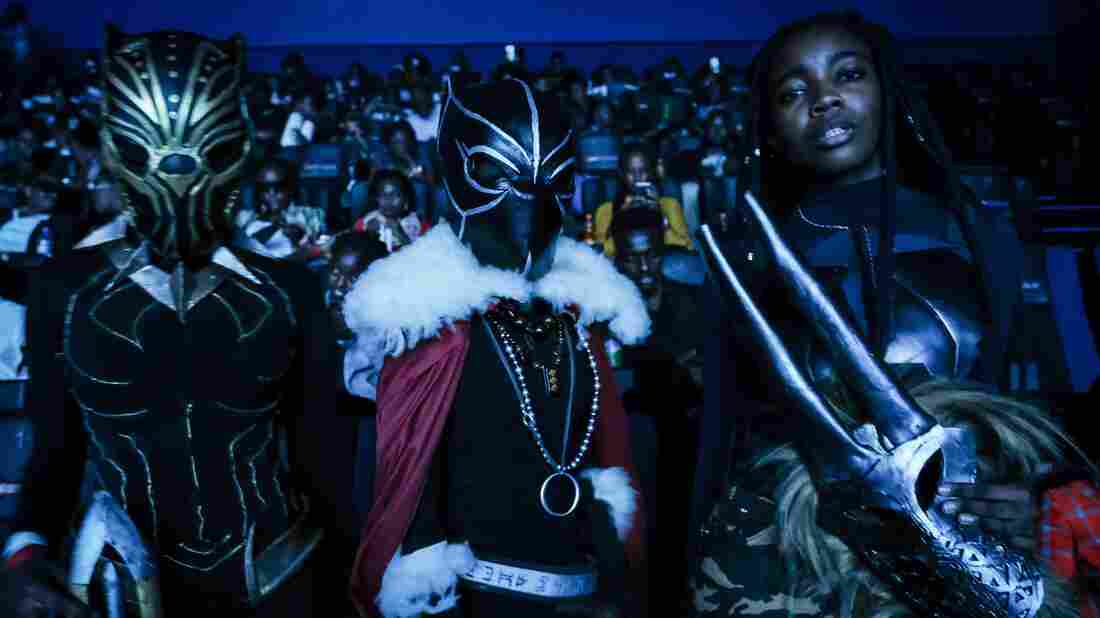 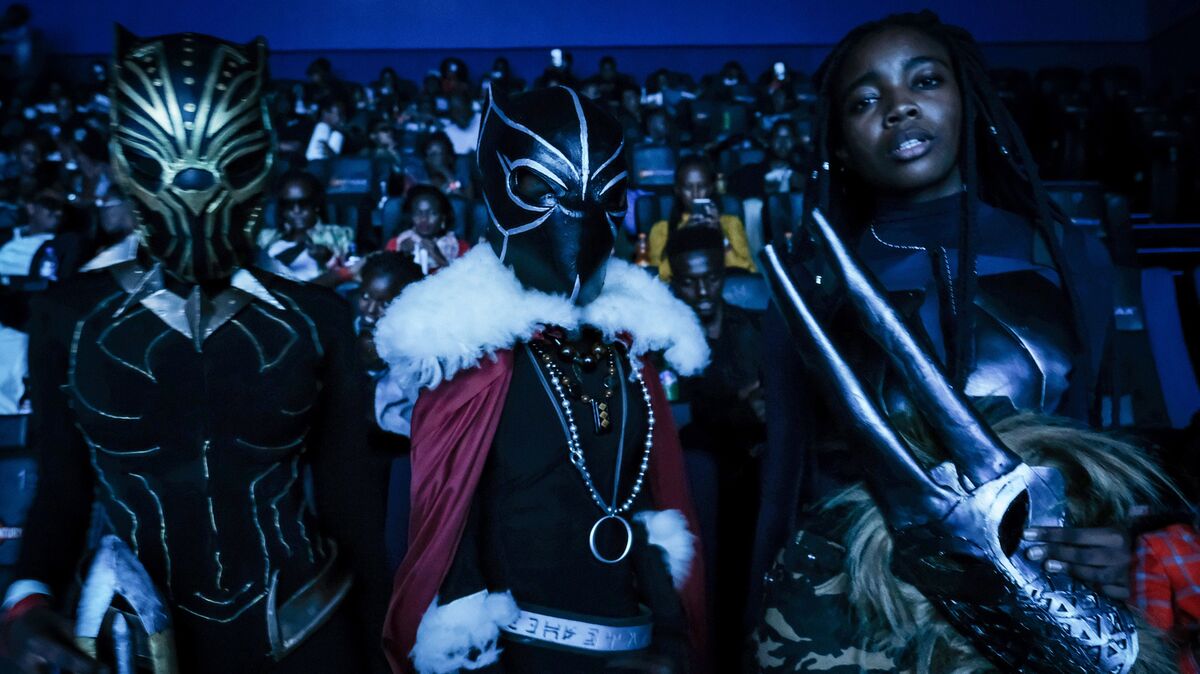 Black Panther's massive marketing campaign didn't hurt — The New York Times reports Disney spent nine months promoting it — but it also had the advantage of a built-in fan base. Stan Lee and Jack Kirby introduced the story to Marvel Comics' readers back in the 1960s.

Black Panther stars Chadwick Boseman as T'Challa and Lupita Nyong'o as Nakia and is directed by Ryan Coogler. At age 31, Coogler helped make history. The Times reports Black Panther is the highest-grossing film ever by a black director.

The film has received stellar reviews from critics and audiences alike, with a 97 percent rating on Rotten Tomatoes.

It tells the story of T'Challa, described by Marvel as "righteous king, noble Avenger," who rules the fictional and technologically-rich African nation of Wakanda and finds his leadership put to the test. 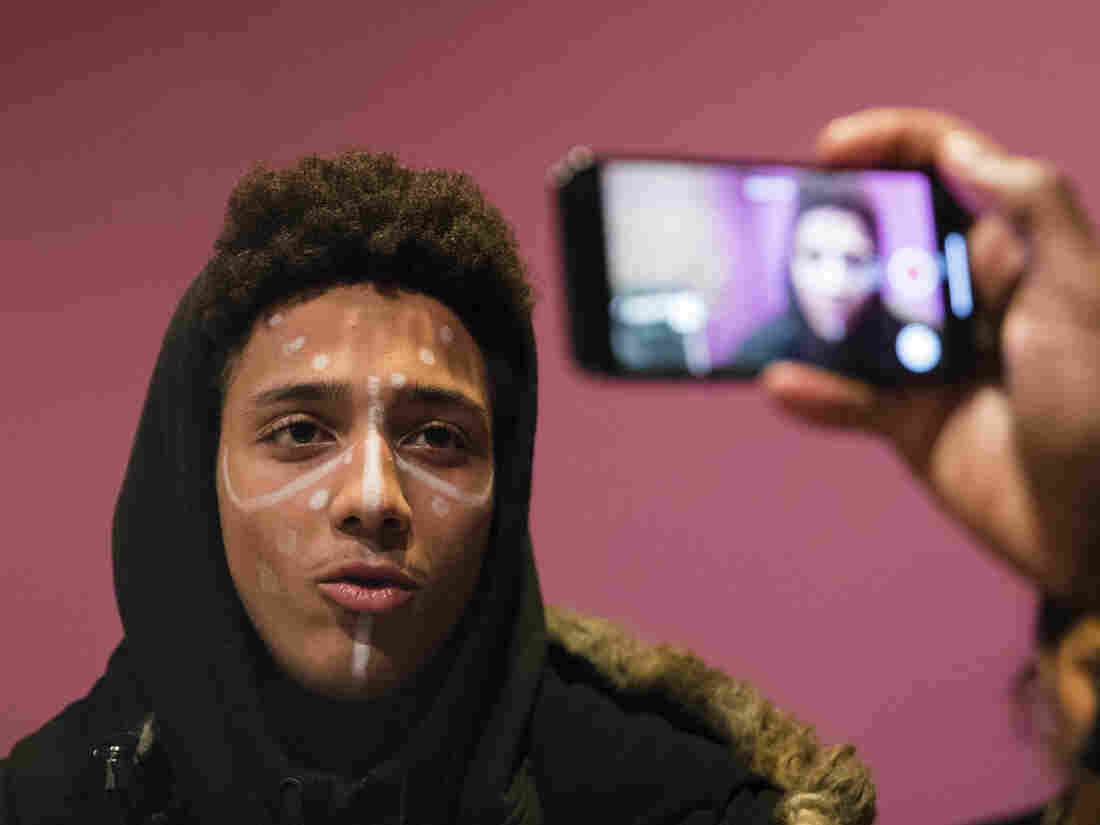 Jayden Pontes, 17, a student from Boston Arts Academy, is filmed wearing face paint similar to characters from Black Panther during a discussion of the significance of the film's release in Boston on Wednesday. The students planned to wear the face paint to the film's screenings. Boston Globe/Boston Globe via Getty Images hide caption 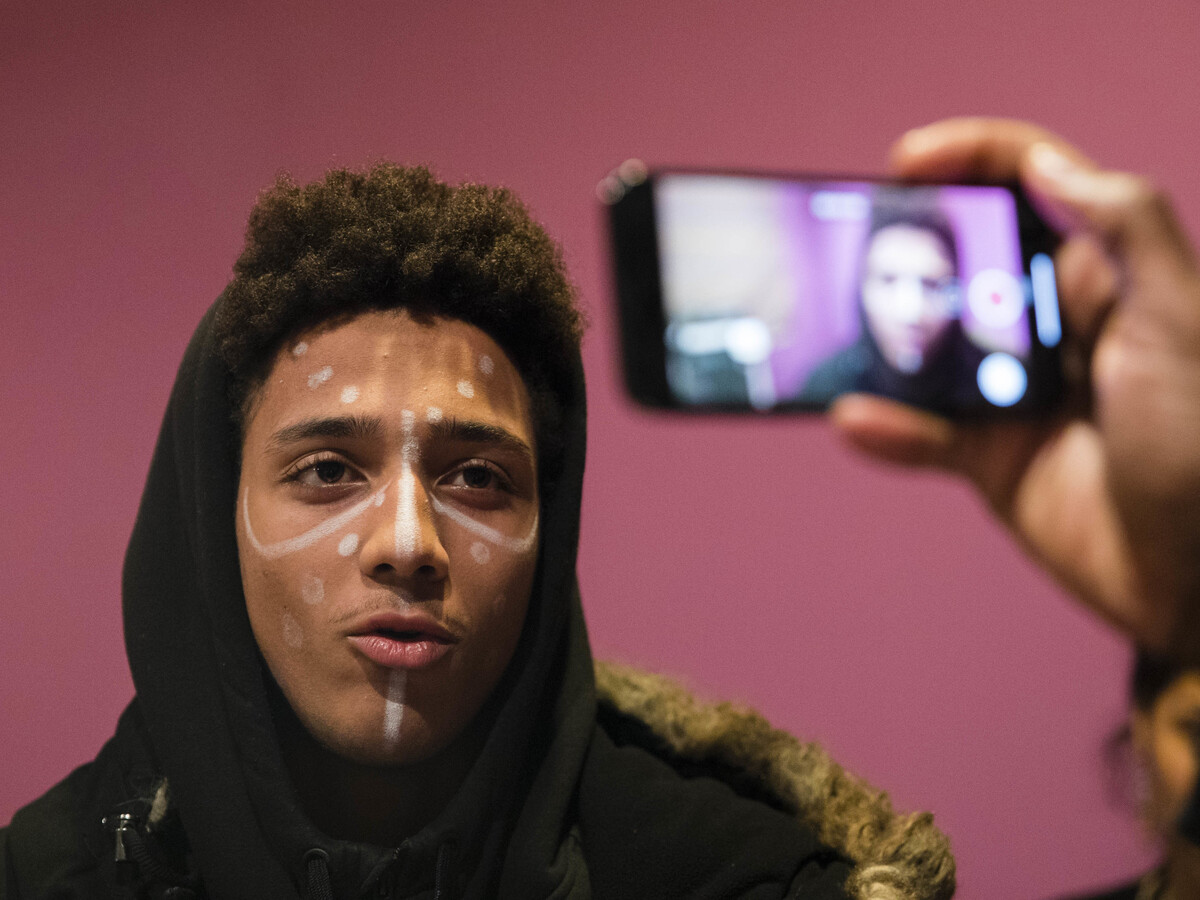 Jayden Pontes, 17, a student from Boston Arts Academy, is filmed wearing face paint similar to characters from Black Panther during a discussion of the significance of the film's release in Boston on Wednesday. The students planned to wear the face paint to the film's screenings.

Coogler told Morning Edition's David Greene that in this day and age, the medium of superhero films is myth-making. "That's why these movies make a lot money," he said. "That's why people talk about them, you know what I mean, people dress up as them."

Disney approved a $200 million production budget for Black Panther, reports the Times, a figure the film has already brought in and more, with an estimated $361 million raked in globally in its opening weekend.

Filmgoers the world-over also conveyed their enthusiasm by dressing the part, in Wakanda-inspired outfits. 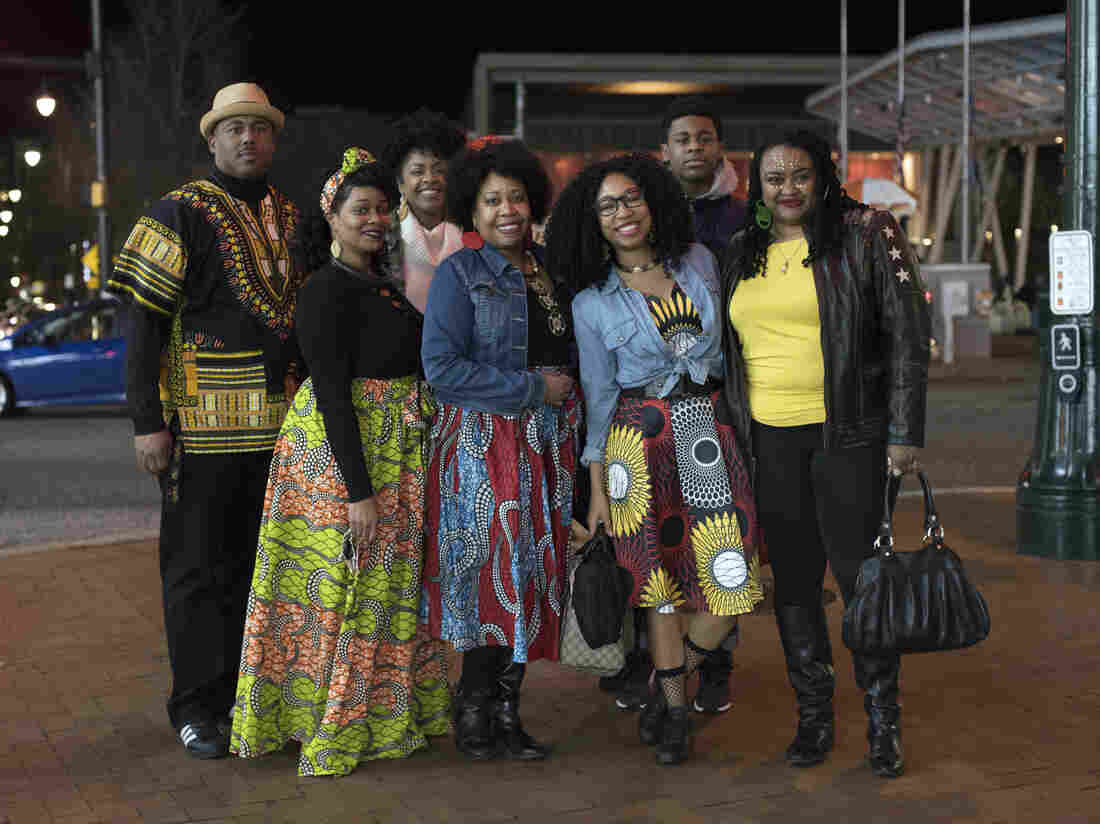 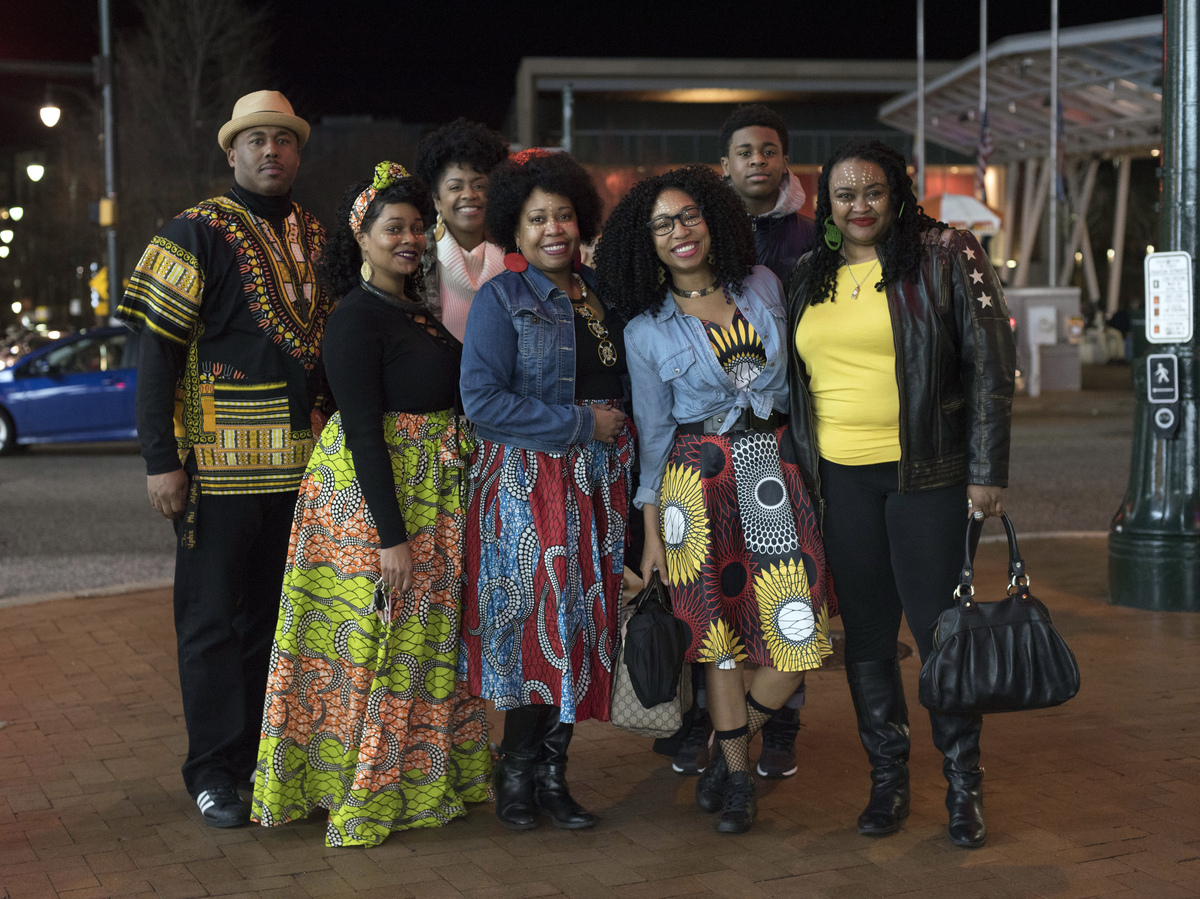 Black People in SPAIN after #BlackPanther OUR TIME IS NOW! pic.twitter.com/vicap5QwcM

For some, excitement over a film about a black super hero, alongside a largely black cast, directed by a black man, surpassed that of a typical blockbuster.

"Hollywood is lifting us up," writes CNN's Van Jones. "This film is a godsend that will lift the self-esteem of black children in the US and around the world for a long time."

Seventh grader Jaheim Hedge saw the film and told the Times, "For people of color, it shows us that we that we can get through any obstacles that are thrown at us if we work together. We can also help the world by sharing our resources."

The #BlackPantherChallenge, which began as a fundraiser to send children from Harlem, N.Y., to see the film, has spun into a wider campaign. GoFundMe says it has raised close to a half a million dollars so far to fund other kids who want to see the movie.

Thanks to you, the #BlackPantherChallenge became the largest GoFundMe in history for an entertainment event.

Then you raised $300k, enough to buy tickets for over 23k children.

NOW...you’ve raised over $400k around the world, enough to send over 30k children to see the film! pic.twitter.com/4JVzBHTwtg