Accessibility links
Syrian Suburb Hammered By Regime's Aerial Onslaught: 'No Words Will Do Justice' : The Two-Way The rebel-held enclave outside Damascus, one of the few left in Syria, has been bombarded by pro-regime forces recently — and UNICEF and other aid groups have struggled to describe the carnage. 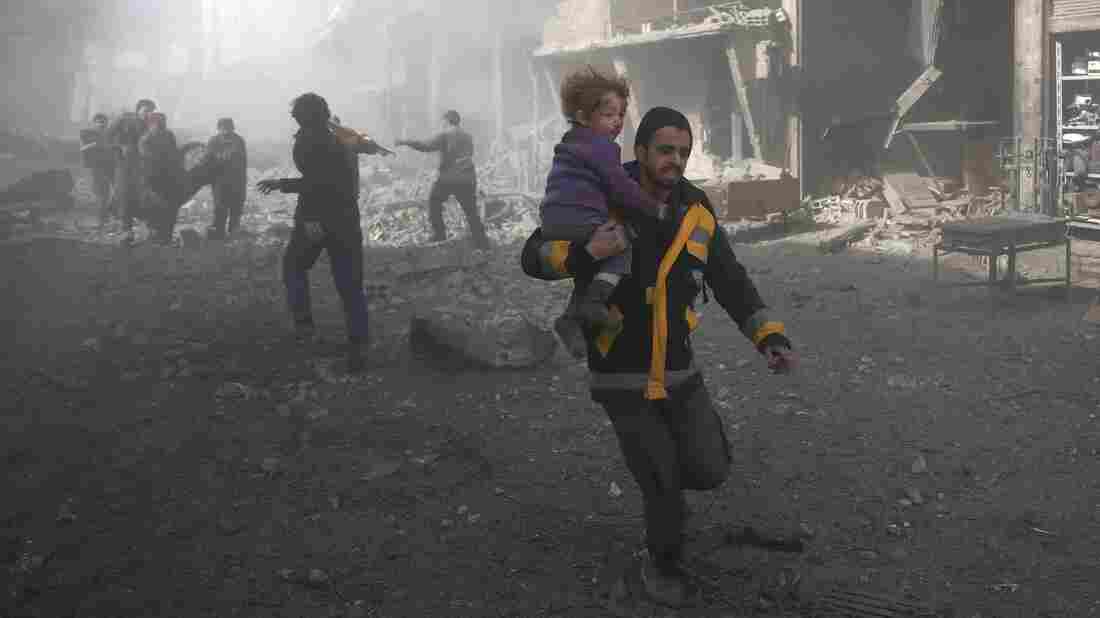 A Syrian man carries a child injured in the government bombing of eastern Ghouta, on the outskirts of Damascus on Monday. Abdulmonam Eassa/AFP/Getty Images hide caption 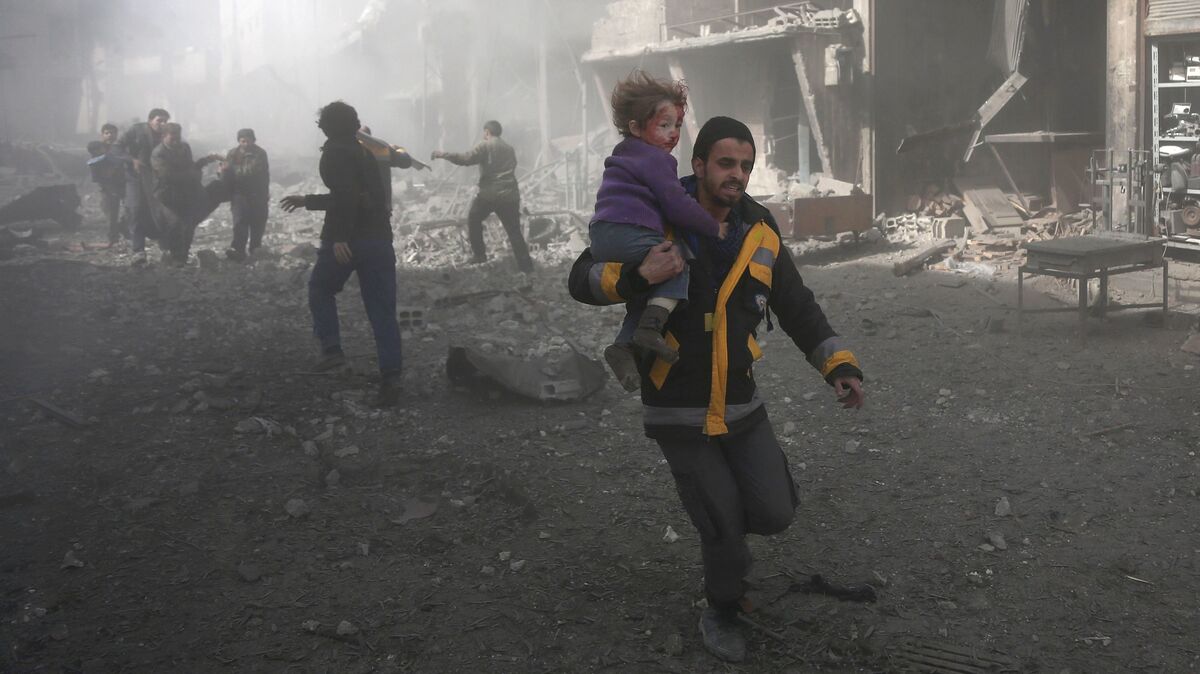 A Syrian man carries a child injured in the government bombing of eastern Ghouta, on the outskirts of Damascus on Monday.

An onslaught by the Syrian government and its allies has killed about 200 civilians since Sunday in the suburbs of the country's capital, Damascus, according to a U.K.-based monitoring group and a consortium of aid groups. The groups say the aerial bombardment has targeted a rebel-held region known as eastern Ghouta, smashing parts of at least five hospitals and leaving hundreds of people wounded.

"This could be one of the worst attacks in Syrian history, even worse than the siege on Aleppo. The sheer intensity of airstrikes is leveling the city, and killing civilians without any regard or mercy," Zedoun Al Zoebi, CEO of the UOSSM, said in a statement Monday.

"Medicine and medical supplies have not been allowed into the city for months now, and there is virtually no medical care available for these people as they suffer severe trauma wounds. To systematically target and kill civilians amounts to a war crime and the international community must act to stop it."

NPR's Ruth Sherlock described scenes of horror on the ground in the area, including civilian buildings blown apart and children found amid the rubble.

"I'm so, so scared," a 12-year-old girl told Ruth between sobs, according to Ruth's translation. "We are hiding under the stairwell to escape from the bombs. There's no basement. I'm asking the world to put an end to this. We're really suffering."

The Damascus suburb — which the United Nations says is home to roughly 400,000 people — is among the few remaining regions in Syria controlled by rebels. The rebel groups have retaliated for the regime's onslaught with shelling of their own, which the state-run news agency SANA says killed at least five civilians Tuesday. 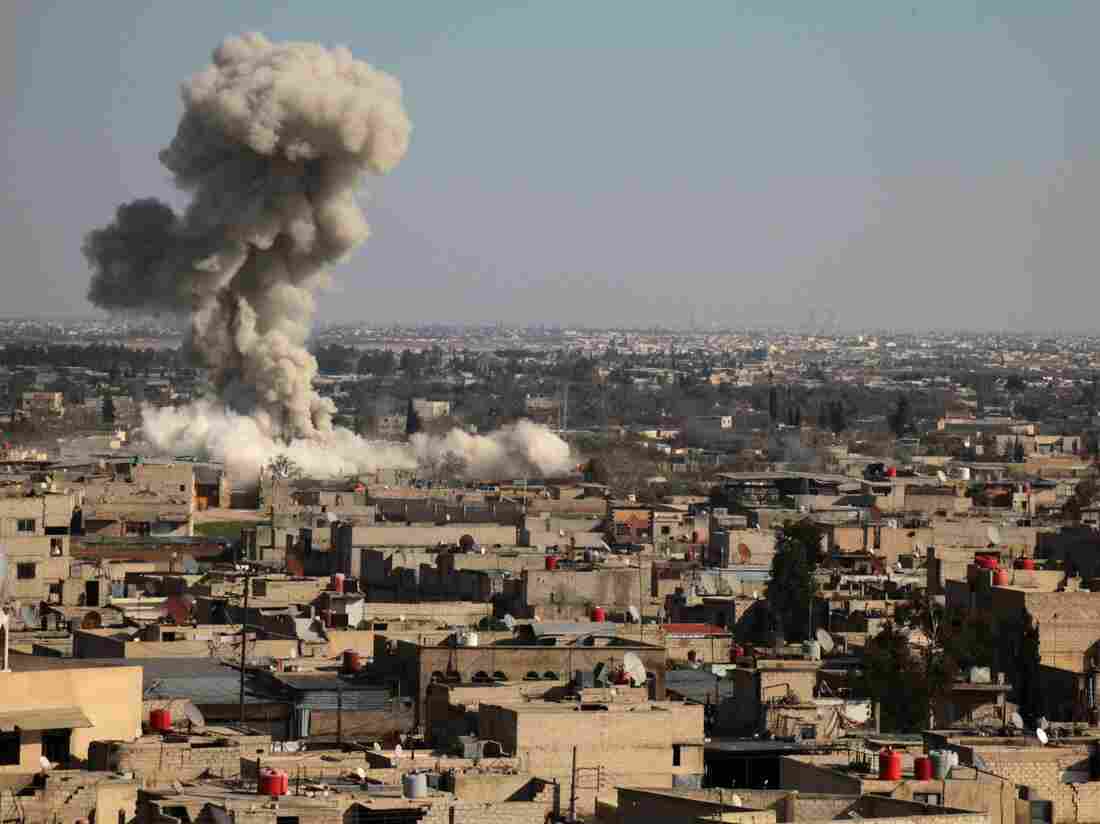 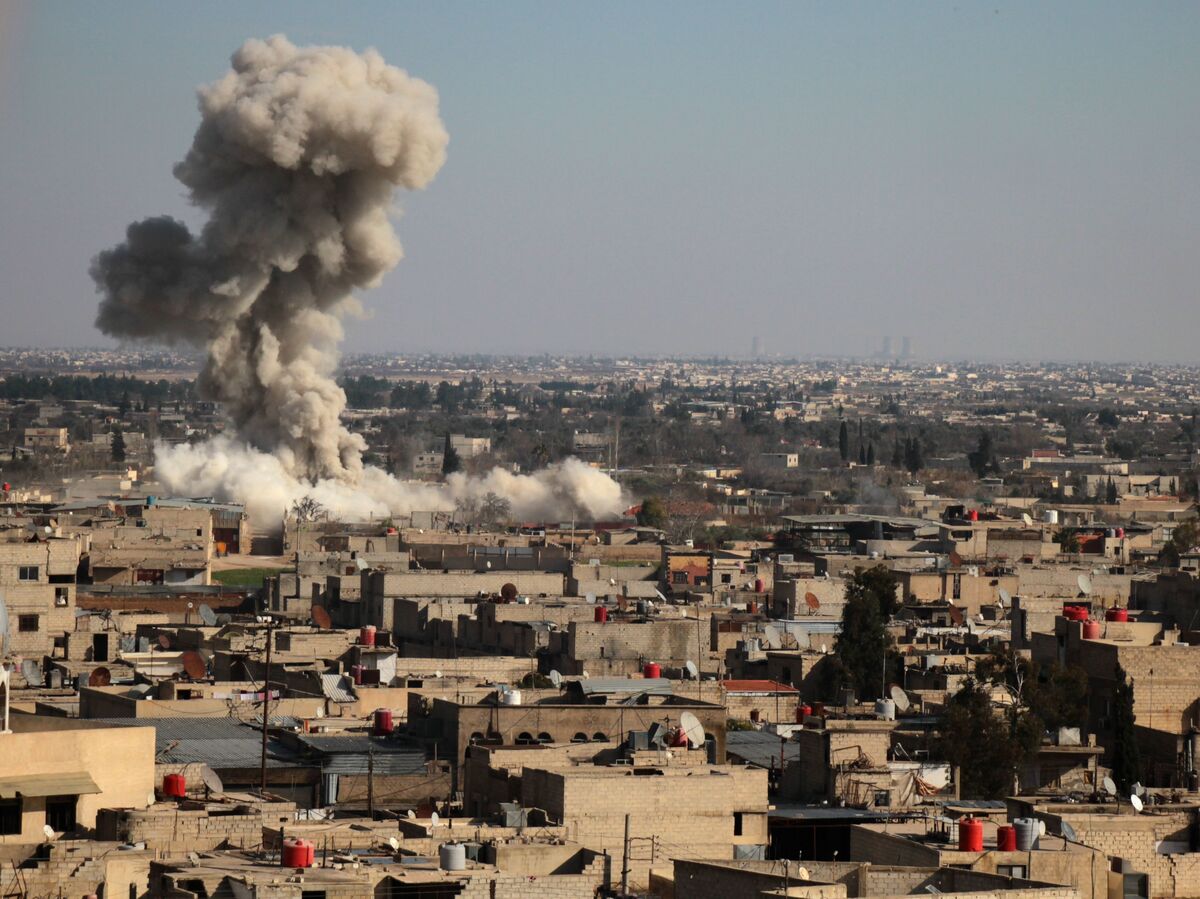 In remarks quoted by The Associated Press, U.N. envoy Staffan de Mistura says that in the violence exchanged between the two sides, "the only difference is that one group has got better weapons. That's the only difference."

Pro-government forces are trying to clear the rebels from this advantageous perch outside the capital, and they are believed to be laying the groundwork for an eventual assault on eastern Ghouta. In a video purporting to show Gen. Suheil al-Hassan, the leader of the government's Tiger Force, the general promises to teach the rebels "a lesson in fighting and fire."

Mohammed Alloush of the Army of Islam, a rebel group, told the AP that with the bombardment on eastern Ghouta, "a new Holocaust is being committed by the dirtiest regime on earth."

So far, international diplomatic attempts at a humanitarian pause to the fighting have proven fruitless, even the U.N. observes "daily reports about civilians being killed and others being severely wounded, in addition to warehouses, hospitals and schools being damaged or destroyed." 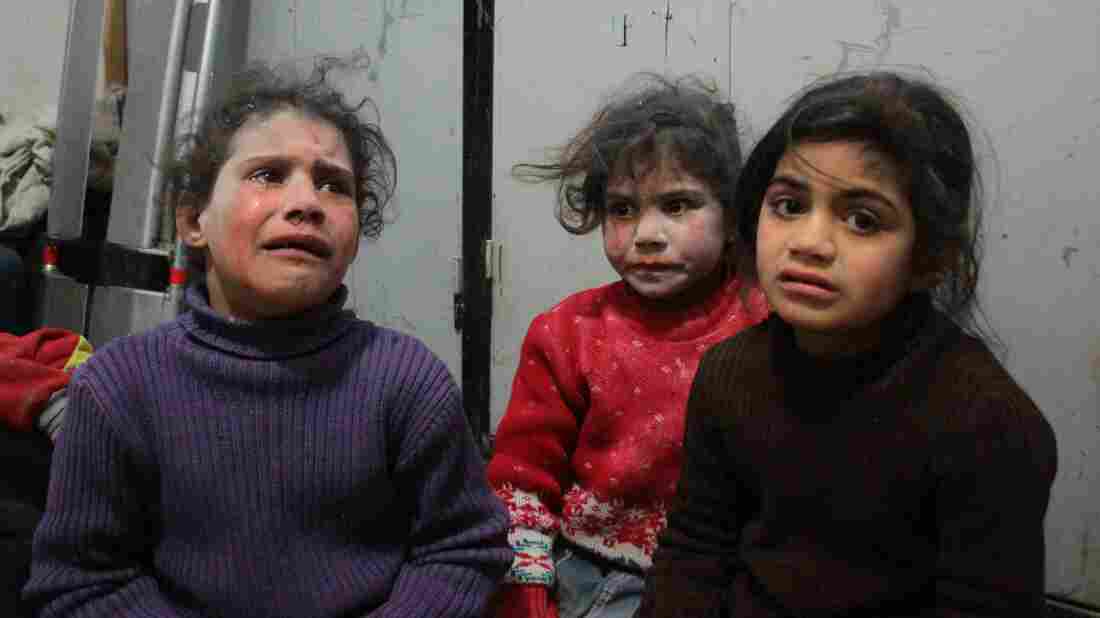 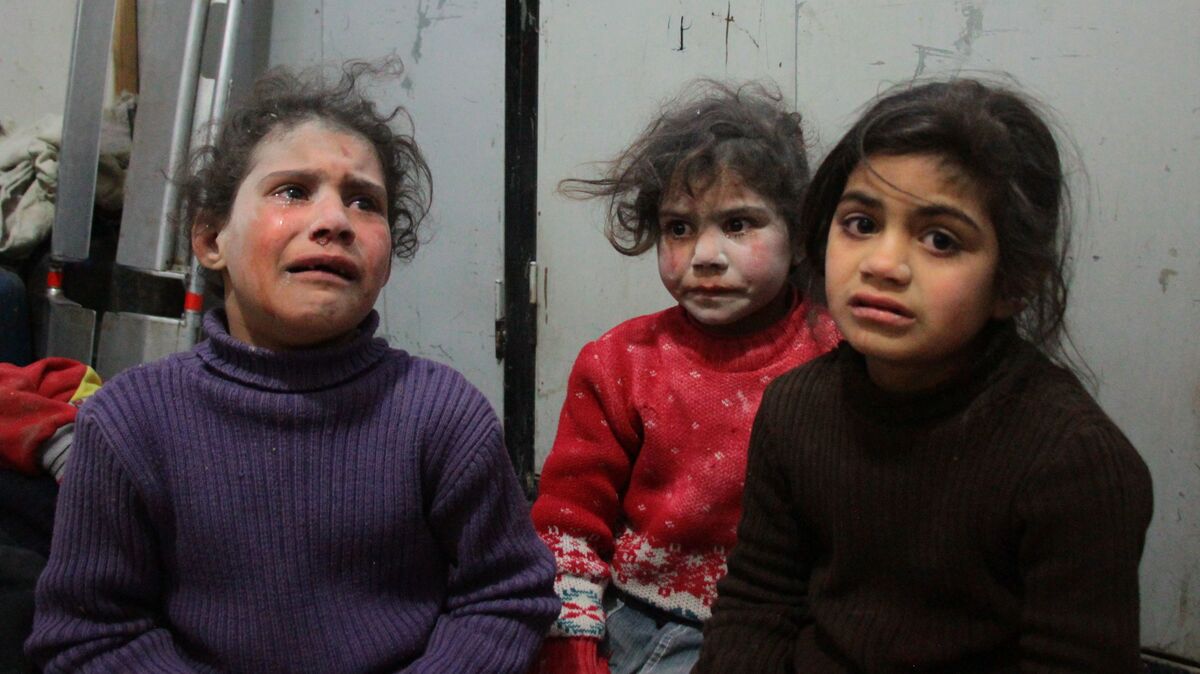 Syrian children caked with the dust of bombed buildings await care at a makeshift hospital in eastern Ghouta on Friday.

Meanwhile, in the Syrian border town of Afrin, the violence racking the country has taken on yet another bloody wrinkle as Turkish troops confronted pro-government forces there Tuesday. For weeks the Turks have attacked the town to dislodge the Kurdish militia known as YPG, which Turkey views as a terrorist organization bent on disrupting its southern border.

But now, it appears the YPG has some new help: The Kurdish rebels say that they invited the pro-regime forces into the town for support, and that the regime accepted.

Turkey's state-run Anadolu Agency reports that Turkish shelling repelled the "pro-Bashar al-Assad terror groups" before they could reach Afrin — but the brief confrontation has prompted concerns the conflict will evolve into further direct clashes between the two countries. Ruth reports Russia is now trying to mediate between Turkey and Syria, a Russian ally.

"The humanitarian situation of civilians in East Ghouta is spiraling out of control," Panos Moumtzis, U.N. regional humanitarian coordinator for the Syria crisis, said in a statement released Monday. "It's imperative to end this senseless human suffering now. Such targeting of innocent civilians and infrastructure must stop now."

UNICEF, for its part, said Tuesday it has been rendered speechless by the killing in Syria: "No words will do justice to the children killed, their mothers, their fathers and their loved ones."

What followed was a blank page, broken only by quotation marks, for a silent statement.

We no longer have the words to describe children’s suffering and our outrage.

Do those inflicting the suffering still have words to justify their barbaric acts? #RunningOutOfWords#ChildrenUnderAttack #Syria pic.twitter.com/GH9V0Pgv5z