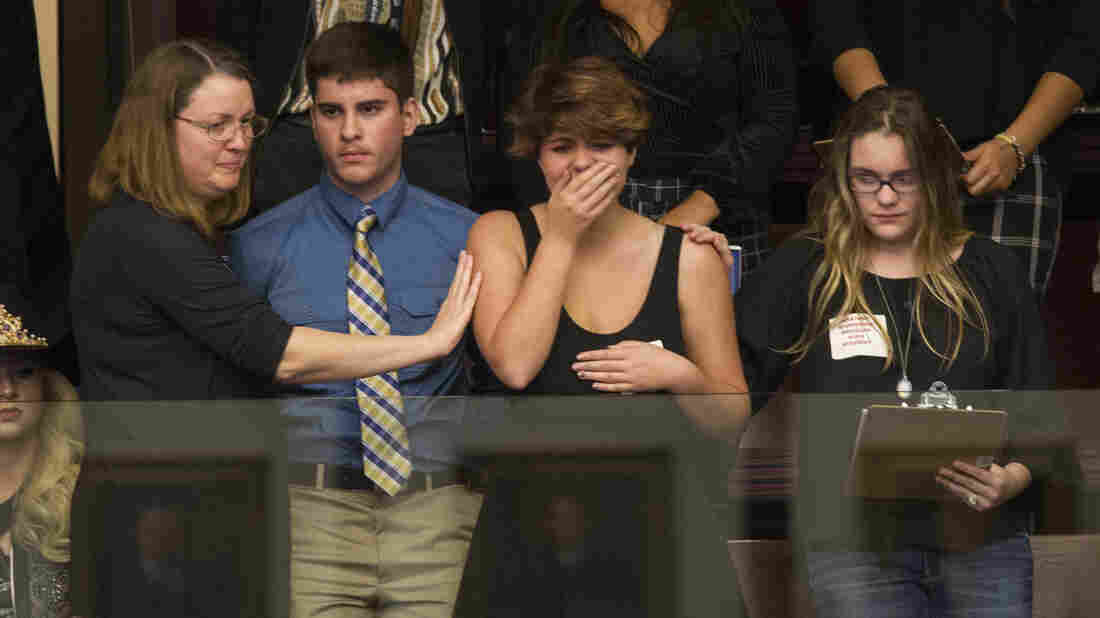 High school students from Parkland, Fla., where a young man gunned down 17 people, react as the state's House of Representatives voted not to hear a bill banning assault rifles. Mark Wallheiser/AP hide caption 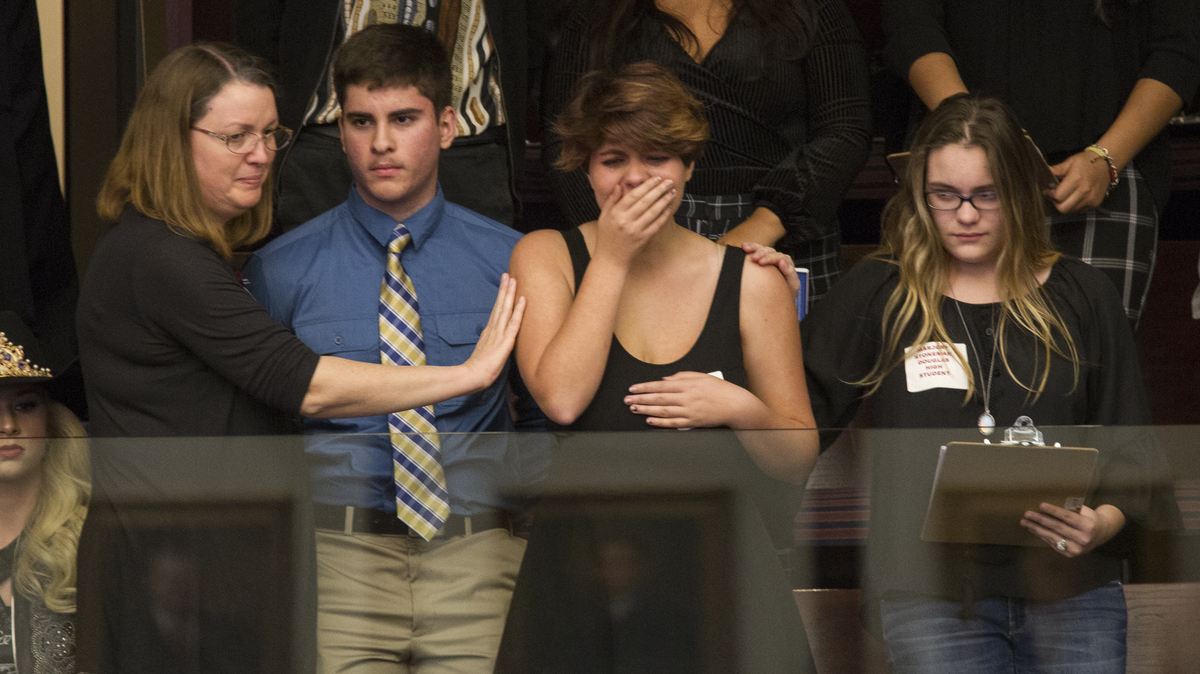 High school students from Parkland, Fla., where a young man gunned down 17 people, react as the state's House of Representatives voted not to hear a bill banning assault rifles.

As high school students who survived the shooting in Parkland, Fla., travel to the state Capitol to demand action on guns, lawmakers offered a glimpse of the battle they face.

In Tuesday's session, which opened with prayer for the community of Marjory Stoneman Douglas High School, where 17 students and staff were killed last week, Florida House lawmakers declined to open debate on a bill that would ban assault weapons and large-capacity ammunition magazines.

The motion to debate the bill, introduced by a Democrat, required a two-thirds vote and failed. Thirty-six lawmakers supported it, while 71 voted no. Its merits were not considered.

Florida state Rep. Kionne McGhee was the lawmaker who asked for the assault weapons bill to be brought to the floor for debate, requesting what he called an "extraordinary procedural move."

"With Marjory Stoneman Douglas High School in mind, HB 219 is a bill that attempts to ensure that mass shootings and massacres like those that took place at Marjory Stoneman Douglas High School --" McGhee said, before the House speaker cut him off because he was talking about the bill's substance. The speaker asked why it should be removed from committee and debated on the floor.

"The subcommittees that the bill is referenced to are not scheduled to meet again this session. Absent any reference to this bill, the bill will be considered dead," McGhee replied. "I ask that you keep this bill, and the conversation about the solution to combat mass shootings, alive."

The vote failed. The entire topic was discussed for less than three minutes.

Some students from Marjory Stoneman Douglas High School were watching the vote from the gallery, according to the South Florida Sun-Sentinel.

"How could they do that to us ? Are you Kidding me ??? #NeverAgain," tweeted student Emma Gonzalez, as the Miami Herald reported. "We are not forgetting this come Midterm Elections - the Anger that I feel right now is indescribable."

There is a Senate version of the bill, the newspaper reports, though it "also has not been heard in committees." A Senate committee "endorsed a proposal to put law enforcement officers in every school in the state."

According to CNN, "almost all 71 lawmakers who voted against considering a assault rifle ban have an 'A' rating from the National Rifle Association."

On Wednesday morning, Democratic state Sen. Kevin Rader told NPR's Morning Edition that he's optimistic about the possibility that lawmakers can tackle these issues in this session. "I am fairly certain that we are going to have some changes in Tallahassee. No doubt about that."

He stated that the fact that the lawmakers were in session makes it more likely that they could take action, compared with after the 2016 shooting at Pulse nightclub in Orlando, which took place during a summer recess.

Also on Tuesday, an aide to Republican state Rep. Shawn Harrison was fired over controversial comments about Marjory Stoneman Douglas High School students. Referencing an Internet conspiracy theory, District Secretary Benjamin Kelly claimed to a Tampa Bay Times reporter that kids pictured in that newspaper "are not students here but actors that travel to various crisis when they happen."

As the newspaper notes, Jaclyn Corin, the high school's 11th-grade class president, swiftly responded with a post on Facebook: