Accessibility links
A New Survey Finds 81 Percent Of Women Have Experienced Sexual Harassment : The Two-Way A nationwide survey found that most women have experienced some form of sexual harassment, many since their teenage years. The results illustrate why the #MeToo movement was so successful. 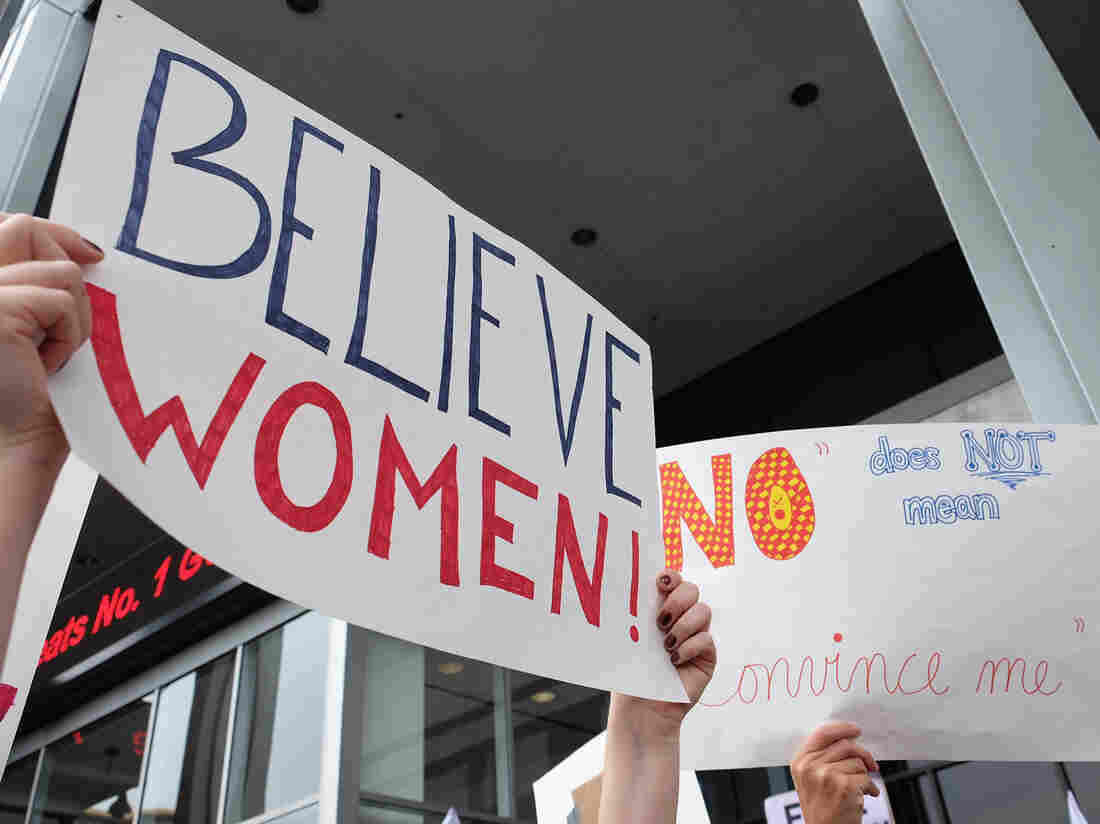 Activists participate in the Take Back The Workplace March and #MeToo Survivors March & Rally on Nov. 12, 2017, in Hollywood, Calif. A new survey offers the first set of nationwide data on prevalence, showing that the problem is pervasive and women are most often the victims. Sarah Morris/Getty Images hide caption 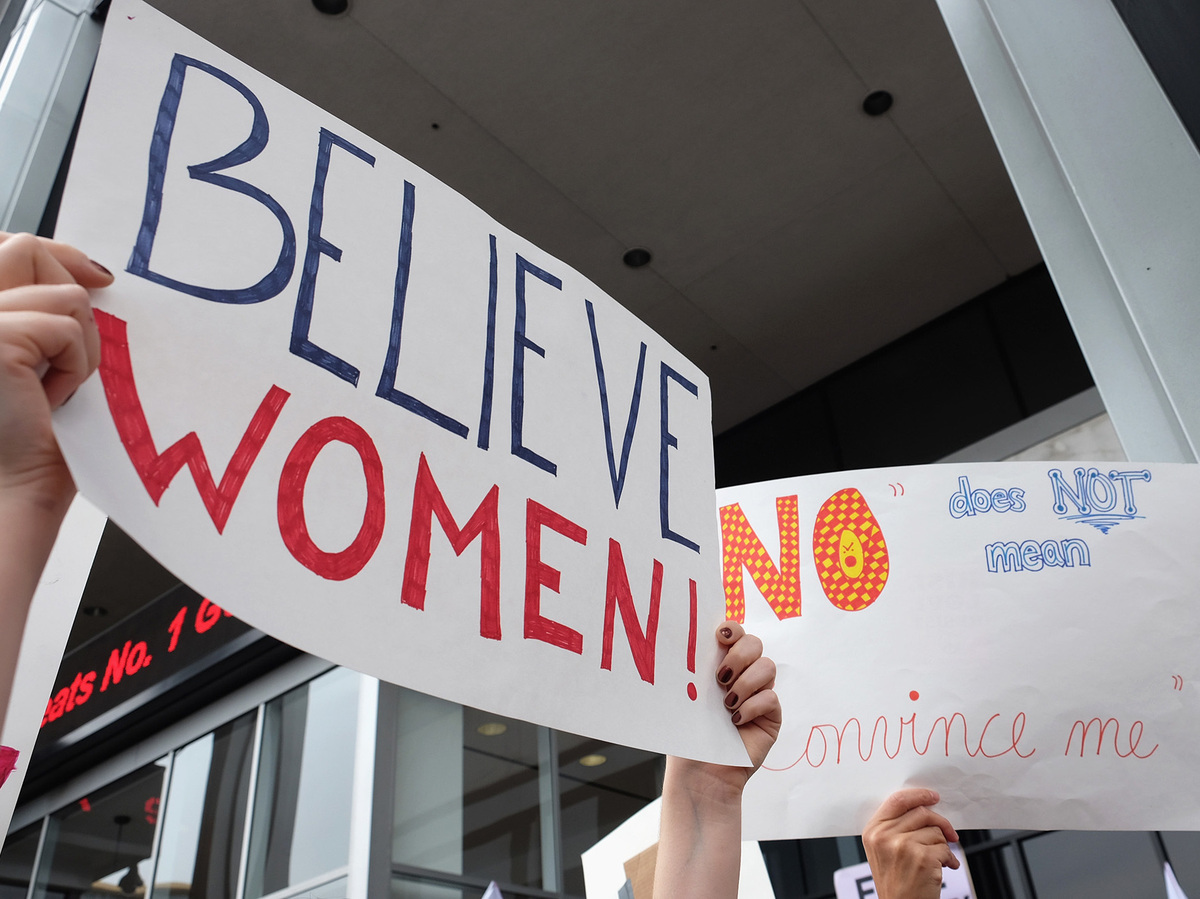 Activists participate in the Take Back The Workplace March and #MeToo Survivors March & Rally on Nov. 12, 2017, in Hollywood, Calif. A new survey offers the first set of nationwide data on prevalence, showing that the problem is pervasive and women are most often the victims.

Back in October 2017, women took to social media to share their experiences of sexual harassment. The #MeToo movement went viral, spurring a national and global discussion on the issue.

Many women have since come forward with their experiences of being sexually harassed by colleagues and bosses, costing influential men in the entertainment industry and the media — including journalists here at NPR — their jobs.

And yet, there has been little data collected on the national prevalence of sexual harassment, says Michele Decker, director of the women's health and rights program at Johns Hopkins School of Public Health. As a result, many people have asked, "Where's the evidence?" she says.

Now an online survey launched in January by a nonprofit called Stop Street Harassment offers some of that missing evidence. It found that 81 percent of women and 43 percent of men had experienced some form of sexual harassment during their lifetime.

Those numbers are much larger than suggested by other recent polls. Those polls used a more limited sample or narrower definitions of harassment, says Anita Raj, director of the Center on Gender Equity and Health at the University of California, San Diego, who analyzed the results of the new survey.

The new survey, on the other hand, included a larger, more nationally representative sample of men and women ages 18 and above, says Raj.

The survey also involved a broader definition of sexual harassment that includes the "continuum of experiences" that women face, she says.

That includes verbal forms of sexual harassment, like being catcalled or whistled at or getting unwanted comments of a sexual nature. It also includes physical harassment, cyber harassment and sexual assaults.

The report also looked into locations where people experienced harassment. The majority of women — 66 percent — said they'd been sexually harassed in public spaces. "The public forums are where you see the more chronic experiences of sexual harassment," says Raj. These include verbal harassment and physical harassment, like touching and groping.

However, 38 percent of women said they experienced sexual harassment at the workplace. Thirty-five percent said they had experienced it at their residence. These experiences are more likely to be assaults and the "most severe forms" of harassment, says Raj.

"The findings show that this is a pervasive problem and permeates all sectors of our lives," says Holly Kearl, the main author of the report. "Most people who said they had experienced sexual harassment experienced it in multiple locations."

"Sexual harassment until more recently has been viewed as part and parcel of what people experienced," says Decker, who wasn't involved in the survey. As a result, public health researchers don't monitor it. "It's often been dismissed, because it's considered not as egregious as sexual assault or rape."

Rape and sexual violence are closely monitored by the U.S. Centers for Disease Control and Prevention's National Intimate Partner and Sexual Violence Survey. As a result, public health agencies and health workers are more aware of their prevalence and have been able to take steps to help victims and offer programs aimed at preventing sexual violence.

One of the most striking findings from the report is that there is a very clear "gender differential," she says. While men experience sexual harassment as well, the prevalence is higher for women, as is the intensity of those experiences. It also shows that men are more frequently the perpetrators, she adds.

Kearl says she was surprised at how few of the victims confronted their harasser. Instead, they changed their own lives to avoid harassers and reduce their risks of being harassed.

The report also shows that most victims suffer from anxiety and depression as well, just like victims of sexual violence. "It shows how challenging it is to confront someone. You'd rather change your life than confront the harasser," she says.

Raj says her own teenage daughter's experience illustrates this. A couple of years ago, her daughter stopped walking to the public library by herself after she was harassed by a group of boys.

"She was walking from her high school in a very privileged, affluent area, an area that most people would define as very safe," Raj recalls. "As she was walking alone around 3 o'clock in the afternoon, there was a group of boys that started calling out to her and saying things like 'nice hips.' And it just made her feel so uncomfortable [that] she didn't walk alone anymore."

Similarly disconcerting is the fact that most victims don't report their experiences, says Decker. "People don't even mention it to friends, families." And so, sexual harassment is "thriving on the silence of women," granting impunity to perpetrators, she says.

Some of that has been turned upside down by the #MeToo movement, because it broke that silence and made it more culturally acceptable to talk about sexual harassment.

"The next wave of this is to really understand ... what are the barriers to people being able to access reporting process?" says Decker. "How can we support people who want to report this if they so choose?"