Accessibility links
One By One, Companies Cut Ties With The NRA : The Two-Way Advocates for stricter gun laws have coalesced under the hashtag #boycottNRA, and several companies appear to have heeded the call a little more than a week after the Parkland, Fla., school shooting. 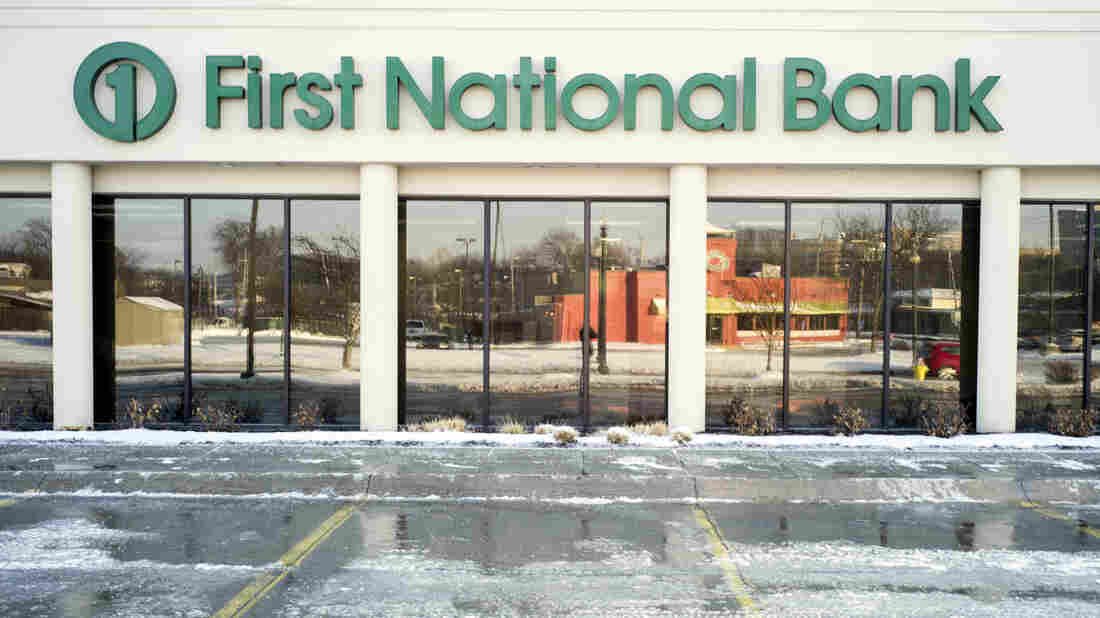 The First National Bank of Omaha is among several businesses that have renounced partnerships with the National Rifle Association in the aftermath of the Parkland, Fla., school shooting. Nati Harnik/AP hide caption 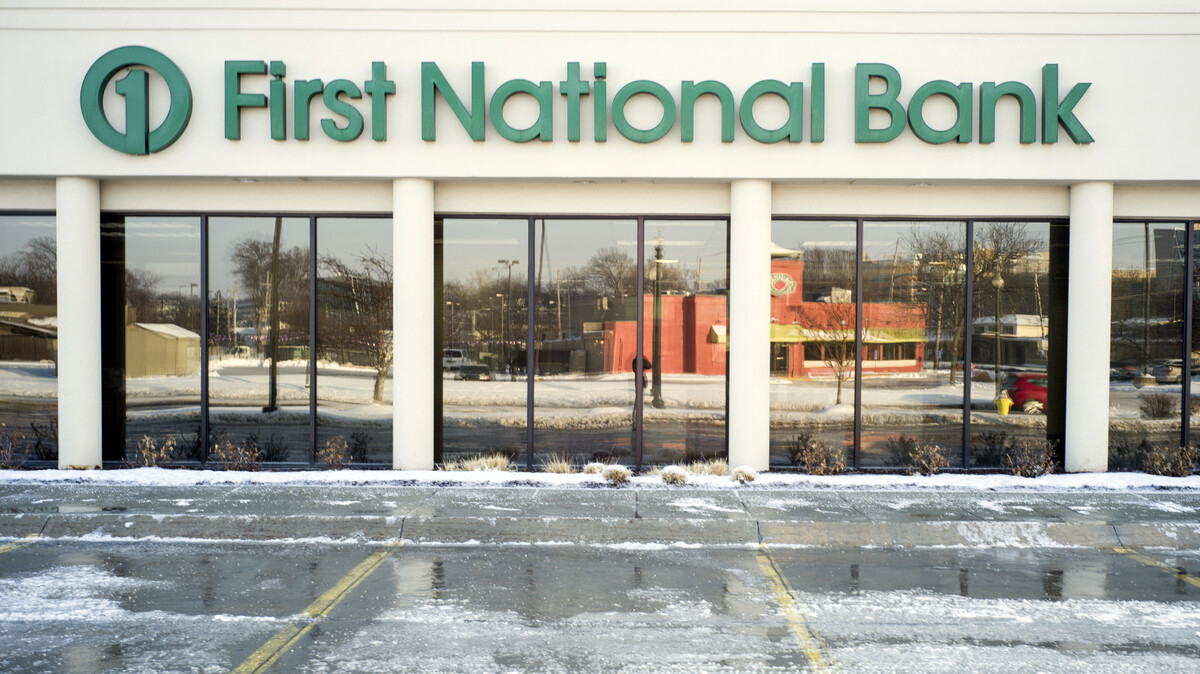 The First National Bank of Omaha is among several businesses that have renounced partnerships with the National Rifle Association in the aftermath of the Parkland, Fla., school shooting.

As a groundswell grows against the National Rifle Association in the aftermath of last week's school massacre in Parkland, Fla., several businesses say they are ending their partnerships with the gun advocacy group.

The brands — ranging from insurance companies to airlines to rental car agencies — announced their decisions on social media, many apparently in direct response to tweets demanding change under the trending hashtag #boycottNRA.

Activists are seeking to name and shame business affiliates of the group.

On its website the NRA says, "It pays to be a member! Get back hundreds of dollars more than you pay in dues" and offers "benefits" running the gamut from home and auto insurance to prescription drug discounts to the "Official Wine Club of the NRA."

By Saturday, Delta and United Airlines both joined a growing list of companies distancing themselves from the NRA. Both said they would no longer offer discounts to members.

Delta is reaching out to the NRA to let them know we will be ending their contract for discounted rates through our group travel program. We will be requesting that the NRA remove our information from their website.

United is notifying the NRA that we will no longer offer a discounted rate to their annual meeting and we are asking that the NRA remove our information from their website.

First National Bank of Omaha got the ball rolling on Thursday when it announced via tweet that it "will not renew its contract with the National Rifle Association to issue the NRA Visa Card." It was responding to a tweet saying "Please END your relationship with the @NRA. #NRABloodOnYourHands." The bank said "customer feedback" spurred it to review its relationship.

Customer feedback has caused us to review our relationship with the NRA. As a result, First National Bank of Omaha will not renew its contract with the National Rifle Association to issue the NRA Visa Card.

A day later, Symantec, the cybersecurity company, said it had halted its NRA discount program.

Symantec has stopped its discount program with the National Rifle Association.

About an hour after that, insurance company MetLife followed suit, tweeting, "We value all our customers but have decided to end our discount program with the NRA."

We value all our customers but have decided to end our discount program with the NRA.

Then rental car companies hopped on board. Enterprise Holdings, which owns and operates car rental agencies Alamo, Enterprise and National, announced via tweets Friday from each brand's account that by March 26, it would sever its NRA member discount program.

Thanks for contacting us. We ended the program – effective March 26. https://t.co/gwYeQR3xAh

Thank you for contacting us! All three of our brands have ended the discount for NRA members. This change will be effective March 26. Thank you again for reaching out. Kind regards, Michael

Thanks for contacting us. We ended the program – effective March 26. https://t.co/BMqcoac4s2

We have notified the NRA that we are ending the NRA’s rental car discount program with Hertz.

On Tuesday, ThinkProgress, a project of the left-leaning Center for American Progress Action Fund, published a list of some two dozen "corporate partners" that offer incentives to NRA members. ThinkProgess says it asked all of the corporations "whether they plan to continue their relationships with the gun lobby. A growing number of those companies have ended their relationship with the NRA since this list was initially published."

By their count, more than a dozen have already ended their relationships.

Company spokespeople reached by NPR would not elaborate on the announcements.

In a statement released Saturday, the NRA said the companies were punishing NRA members, "in a shameful display of political and civic cowardice. In time, these brands will be replaced by others who recognize that patriotism and determined commitment to Constitutional freedoms are characteristics of a marketplace they very much want to serve."

The statement went on, "Let it be absolutely clear. The loss of a discount will neither scare nor distract one single NRA member from our mission to stand and defend the individual freedoms that have always made America the greatest nation in the world."

Many social media users have maintained their support for the group, which says it has 5 million members. Some said they would boycott the companies severing ties with the NRA.

There are only 5 million NRA members but over 300 million of us! Businesses have a choice whose business they prefer. We are watching. #BoycottNRA

The Huffington Post reports that several companies are continuing to stick by the NRA.

But it is not a novelty for companies to distance themselves from the group after mass shootings.

ThinkProgress reports Wyndham Worldwide stopped offering NRA discounts after a pressure campaign in the aftermath of the Sandy Hook shooting in 2012.

But the parent company of major hotel brands including Travelodge, Howard Johnson, Ramada and Days Inn emphasized the distance by tweeting Friday that it "is no longer affiliated with the NRA."

Hello Elaine. Please know, Wyndham is no longer affiliated with the NRA.

NRA CEO Wayne LaPierre addressed the annual Conservative Political Action Conference on Thursday and spoke of "the breakneck speed for gun control laws," following the Florida shooting. "As usual, the opportunists wasted not one second to exploit tragedy for political gain," he said. 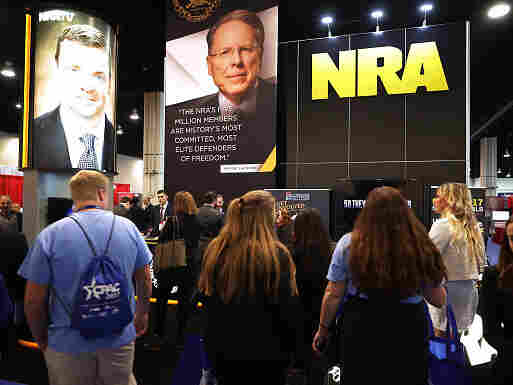 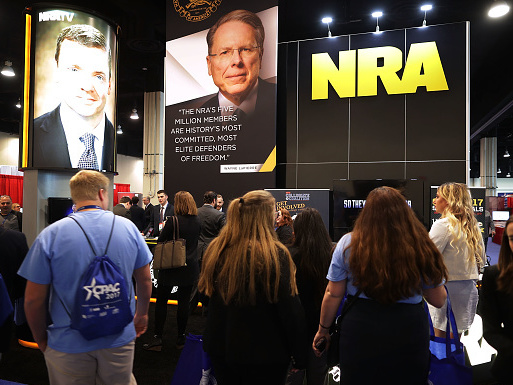 Meanwhile, some teachers in Florida were unsettled to learn earlier this week that the retirement funds to which they've been contributing invest in the gun company that produced the weapon used in the Parkland attack. Bloomberg News reports the Florida Retirement System Pension Plan held more than 41,000 shares in American Outdoor Brands Corp. (formerly Smith & Wesson), maker of the AR-15 rifle used by the shooter.

The president of the Florida teachers union has called for the fund to divest itself of shares. But The Washington Post reports that a spokesman with the state pension fund said that is unlikely to happen anytime soon.

Student survivors of the Marjory Stoneman Douglas High School shooting that left 17 of their classmates and educators dead are also using their platform to increase pressure on the NRA.

On Wednesday, at a CNN town hall, Florida Sen. Marco Rubio broke with an NRA stance when he announced he would support raising the age from 18 to 21 for "buying a rifle." He was responding to a question from student survivor Cameron Kasky. However, during the same exchange, Rubio refused to say he would renounce NRA donations. (Rubio has earned the NRA's highest rating, A+.)

Demonstrations by Stoneman Douglas survivors have mobilized students across the country, who have been protesting, staging school walkouts and calling on legislators to act.

"March for Our Lives," a national rally, is planned in Washington, D.C., on March 24.

A previous caption, relying on information from Getty Images, incorrectly said the photo of the NRA booth was taken on the first day of CPAC. It was actually taken Friday.