Accessibility links
Trump Administration Restricts H-1B Worker Visas Coveted By High Tech : The Two-Way It's another step in fighting potential fraud and abuse in the program that brings 85,000 highly skilled workers into the U.S. every year. More detail is required on why the workers are needed. 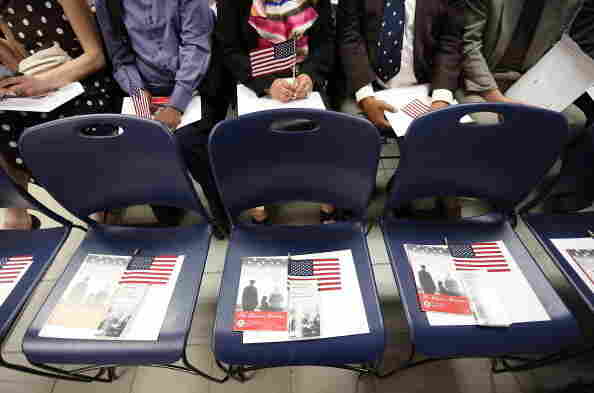 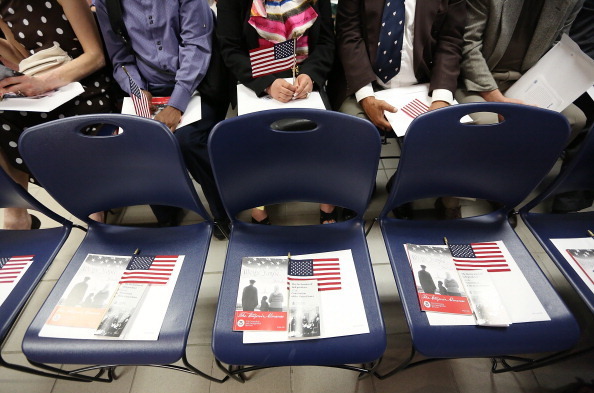 Citizenship candidates wait for a naturalization ceremony to begin in downtown Manhattan on July 2, 2013 in New York City. U.S.

The Trump administration is tightening the rules for companies that contract out high-skilled workers who are in this country on H-1B visas.

The U.S. Citizenship and Immigration Services agency issued a new policy memo on Thursday that requires "detailed statements of work or work orders" about the work that will be performed when an H-1B visa worker is employed at a third-party work site. Employers will have to file more details that support the need for foreign talent.

H-1B visas are controversial. American tech companies use them to hire highly skilled foreign workers, such as engineers, IT specialists, architects among others, in situations in which they say there is a shortage of U.S.-born talent. The visas are good for three years and renewable for another three-year term.

Critics of the visas — 85,000 of which are issued every year — say American workers are aced out of competition with workers who can be paid less.

As CNN reports, "Indian outsourcing firms will be the hardest hit. Indian workers receive more than 70% of all H-1B visas."

The memo says USCIS recognizes that visa-holders may wind up earning less money than promised or might perform "non-specialty" jobs when they are contracted out to third-party worksites.

The policy change comes as the Trump administration has signaled its desire to change the visa program with a "Buy American, Hire American" policy outlined in an executive order signed in April 2017. The order promised to root out fraud and abuse in the program.

As the Mercury News reports, the H-1B program has come under intense federal scrutiny.

"A Bay Area News Group report earlier this week found a sharp rise in the number of reviews immigration officials were conducting on H-1B applications. From January to August 2017, the U.S. Citizenship and Immigration Services sent 85,265 requests for evidence in response to H-1B visa applications, a 45 percent increase compared to the same period a year earlier, agency data show. Such requests are made when an application is missing required documents or when the agency determines it needs more proof to decide if a worker is eligible for the visa. Immigration lawyers say the extra enforcement could discourage companies and individuals from seeking an H-1B visa in the first place."