Accessibility links
Scientists Predict King Penguins Face Major Threats Due To Climate Change : The Two-Way The researchers say the problem is that the animals' primary source of food is moving farther away from places where they can breed. They're likely going to have to swim farther for their dinner. 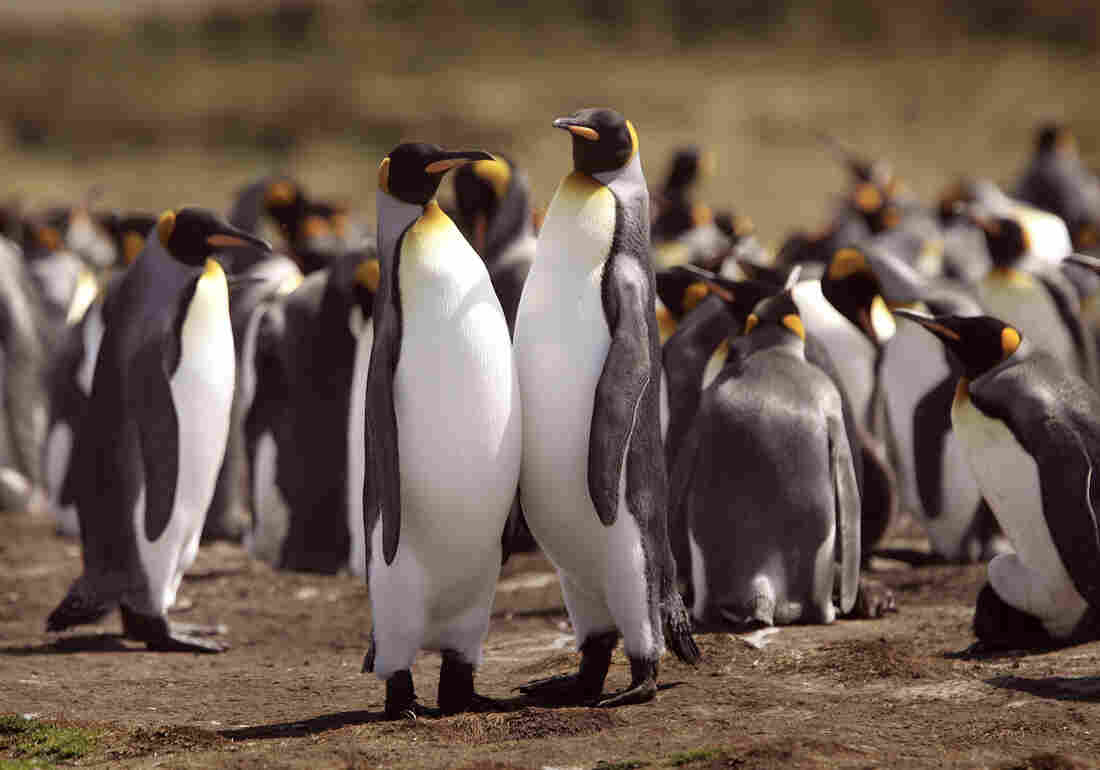 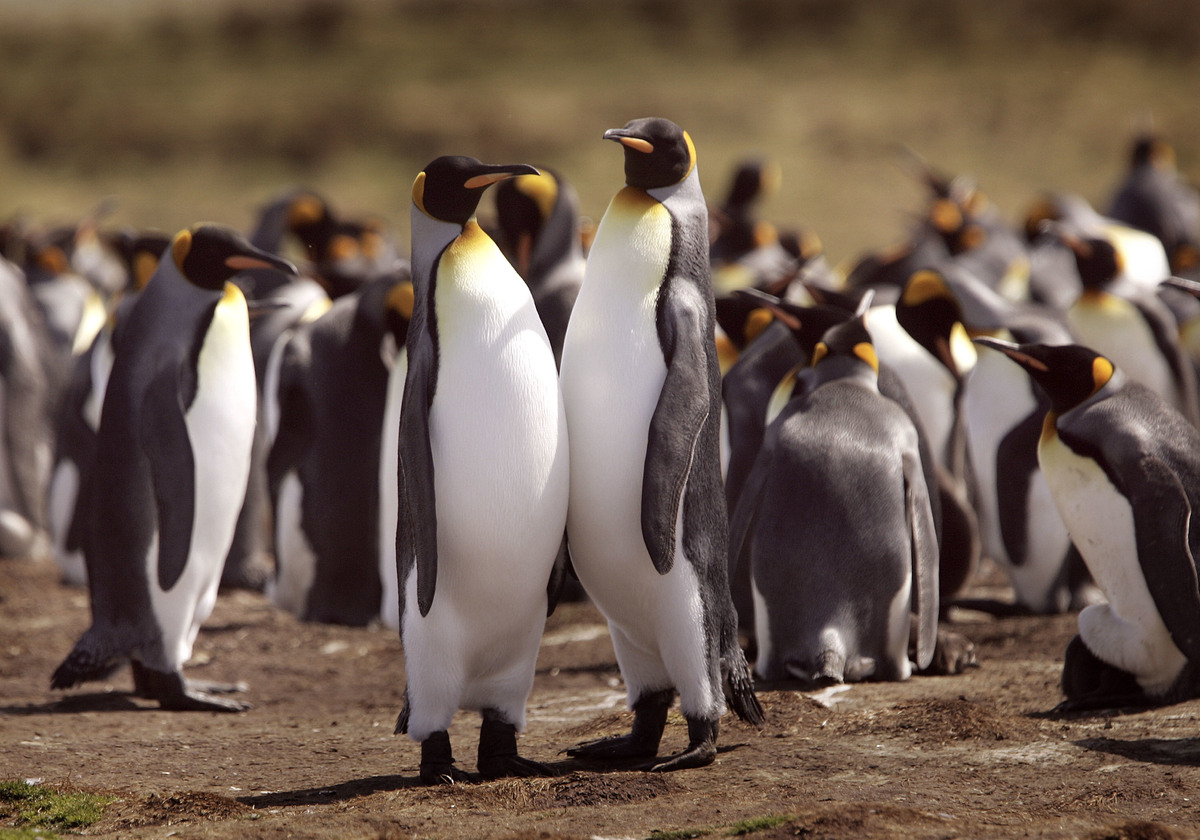 Seventy percent of the world's king penguin population could face threats to its habitat by the end of this century, according to a new scientific model.

The researchers say the problem is that the animals' primary source of food is moving farther away from places where the penguins can breed. They're very likely going to have to swim farther for their dinner.

"This is really surprising to us, to find such a massive change is going to happen in such a short time frame," says Emiliano Trucchi, a researcher in evolutionary genetics from the University of Ferrara. The team's research, co-led by Céline Le Bohec of the Université de Strasbourg, was published Monday in Nature Climate Change.

Trucchi tells NPR that king penguins breed only on islands that are ice-free near Antarctica, and there are "just a handful" of those.

While the chicks are reared, he says, the adults take turns swimming to the primary source of food. The penguins swim hundreds of miles, Trucchi says, to gather small fish and other ocean creatures to bring back to their young.

Giant Prehistoric Penguins Once Swam Off The Coast Of New Zealand

The source is a nutrient-rich band of water called the Antarctic Polar Front, where cold deep water meets an area of warmer water. King penguins get some 80 percent of their nutrition from this band, he says.

The researchers' model projects that the Antarctic Polar Front is moving closer to the South Pole — "so some of the islands north of the polar front will be farther away from the source of food."

Trucchi says it is going to be difficult to predict exactly how the penguins will navigate their changing environment.

Genetic information from the penguins shows that they have historically traveled large distances and mated outside their colonies. While the warming temperatures may mean that new islands will become possible breeding grounds, the timing will be tricky — will they be habitable when the food source becomes too far away? 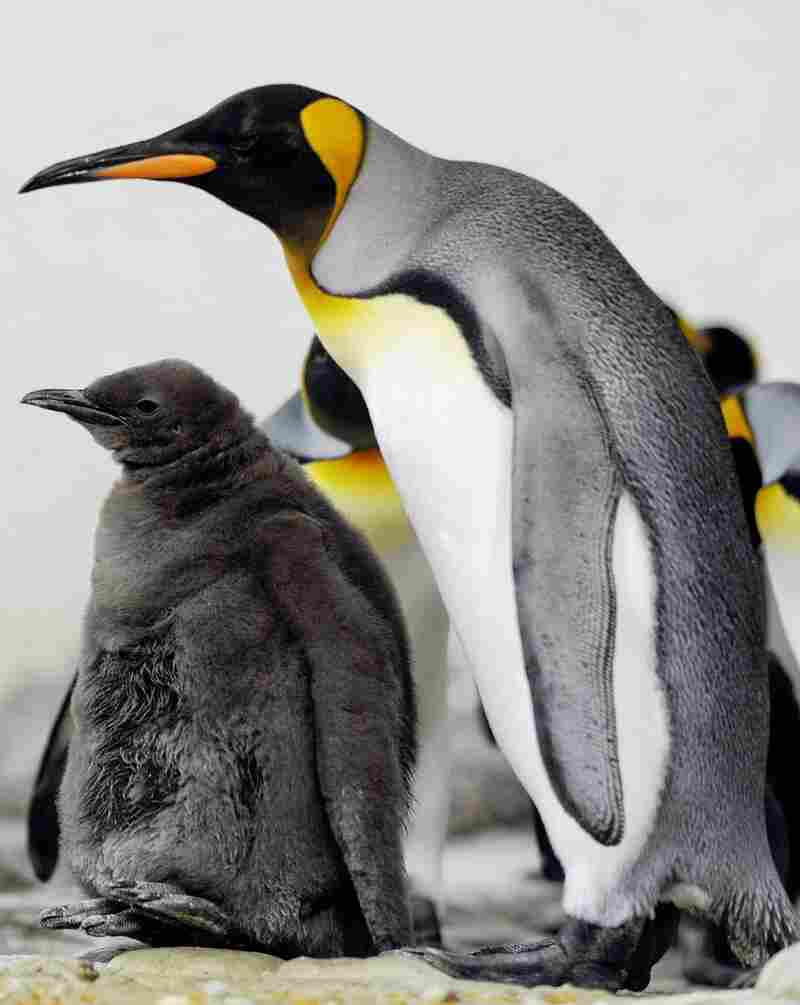 A young king penguin is looked after by an older penguin in the Zurich zoo in 2009. Walter Bieri /AP hide caption

"We are talking about 1 million individuals that need to find a new place to live," Trucchi says, adding that "the endpoint of this massive relocation is very hard to predict."

And likely targets are home to other species of penguin. A major influx of king penguins could negatively impact the other inhabitants of the islands, he says. To make things even more complicated, the penguins must nest on sandy beaches, not rocky ones, and too much ice in the water can make an island untenable for them.

The researchers tested the model using a range of greenhouse gas emissions scenarios. In the most extreme one, the paper states, "70% of the present day 1.6 million king penguin breeding pairs are expected to abruptly relocate or disappear before the end of the century."

Polar Photographer Shares His View Of A Ferocious But Fragile Ecosystem

But even in a low emissions scenario, threatened habitats include the Crozet Islands — home to about half the global king penguin population.

The model assumes an upper limit of about 430 miles as the distance between where penguins can breed and find food. But, Trucchi adds, "we know for sure that even shorter distances are already affecting the survival and the breeding success of the king penguin." That suggests that the team's findings should be considered low estimates of the impact, he says.

"They're bringing together all these different perspectives to talk about what happens when you have a species that is locked into a geographic location to breed and their food starts moving," Gretchen Hofmann, a professor of ecological physiology at the University of California, Santa Barbara who was not involved in the study, tells NPR.

"There are some things they can't completely predict, but they are really trying to come up with a reliable species distribution modeling to be able to look forward to the effects of climate change and impacts on biodiversity," Hofmann adds. She praises the scientists for the number of factors they do include in their model — "they've done as good as anybody I've seen trying to bring all that together."

The researchers also encourage proactive conservation efforts, saying that the island of Bouvet is likely to be less impacted and could serve as a refuge.

They warn that the ecological changes could have implications for other species with similar patterns. "There are many species, other seabirds or marine mammals that have to breed on land and then they forage on the Antarctic Polar Front," Trucchi says. And in the polar environment, king penguins are high up the food chain. A major decline in its numbers, he adds, could "represent just the tip of the iceberg of what's actually happening with this global warming."