Accessibility links
Trump, Congressional Leaders Honor Billy Graham In Rare Capitol Hill Tribute : The Two-Way Ahead of Friday's funeral in North Carolina, the evangelist is lying in honor at the Capitol rotunda through Thursday; it is just the fourth time a private citizen has been recognized in that way. 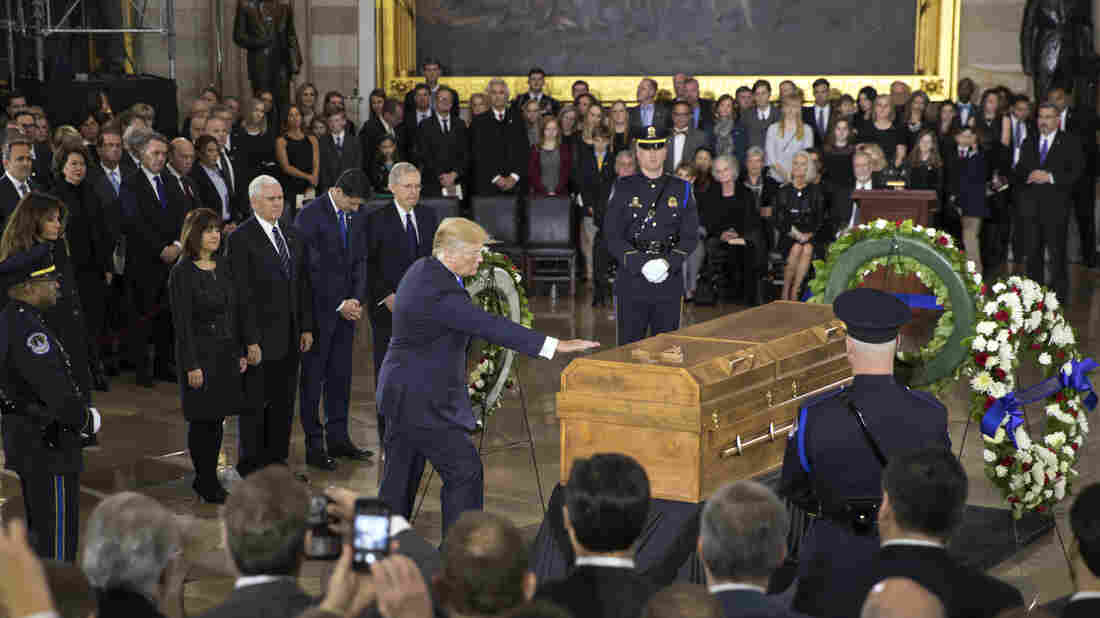 President Trump touches the casket of the Rev. Billy Graham, who died last week at age 99, during a ceremony in the Capitol rotunda on Wednesday. J. Scott Applewhite/AP hide caption 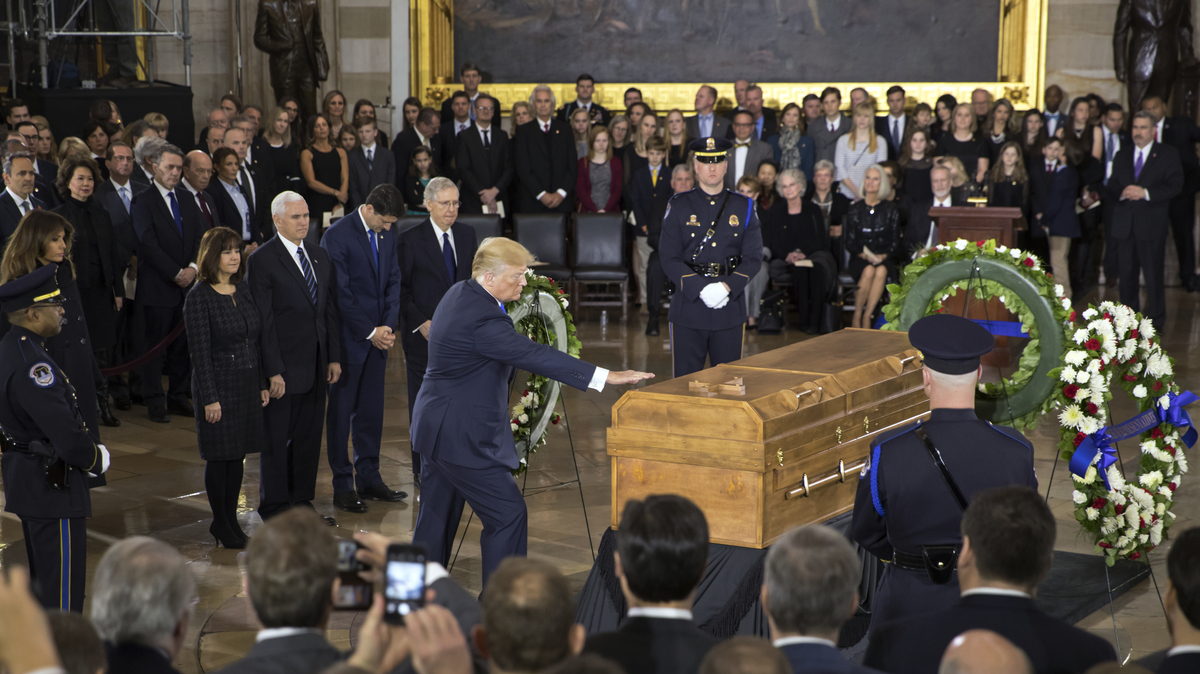 President Trump touches the casket of the Rev. Billy Graham, who died last week at age 99, during a ceremony in the Capitol rotunda on Wednesday.

President Trump and congressional leaders honored the late Rev. Billy Graham Wednesday at a rare memorial ceremony in the Capitol rotunda, one week after the 99-year-old evangelist died at his Montreat, N.C., home.

Graham's life began as a "North Carolina farm boy" who grew to lead "a nationwide revival," said President Trump during the ceremony, adding that Graham's acceptance of "Jesus Christ as his Lord and Savior" not only changed our country, "it changed, in fact, the entire world."

It is just the fourth time a private citizen has lain in honor in the rotunda, following two Capitol Police officers killed in the line of duty in 1998 and civil rights pioneer Rosa Parks in 2005. The occasion must be approved by Congress, according to the federal agency that maintains the Capitol.

"His clear voice thundered through packed tents, stadiums, auditoriums, parks and plazas the world over," McConnell said. "His warmth and graciousness lit up living rooms and touched hundreds of millions of hearts."

As NPR's Tom Gjelten has reported, over the course of his six-decade-long career, Graham preached to more than 200 million people in nearly 200 countries.

Among them, by Trump's own account was a young Donald Trump. The president said Wednesday that his father, Fred Trump, "was a big fan" of Graham's who "said to me, 'Come on, son' — and, by the way, he said, 'Come on, mom. Let's go see Billy Graham at Yankee Stadium.' And it was something very special."

Trump was referring to Graham's 1957 sermon to a crowd of 100,000 as part of his weekslong New York Crusade meetings.

The GREAT Billy Graham is dead. There was nobody like him! He will be missed by Christians and all religions. A very special man.

Graham, known as "America's pastor," also earned the nickname of "Pastor to Presidents," having met with every president since World War II, and acting as counselor to many of them.

Although Trump attended a 2013 birthday celebration for the then-95-year-old Graham, by the time Trump took office, Graham was keeping a lower profile, reports The Associated Press, and it is his son, William Franklin Graham III, who has the closer relationship with the president.

House Speaker Paul Ryan, R-Wis., also spoke at the ceremony and said Graham ministered to people from all walks of life, "from some of the greats, whose statues line this very hall," Ryan said, "to every day citizens lining up to pay their respects."

On Sunday, a motorcade with Graham's remains moved through his home state of North Carolina for several hours, allowing resident to catch a glimpse and take pictures.

"Over the course of his career, Graham moved steadily toward more moderate positions. Having once tolerated separate black and white seating sections at his rallies, he later insisted that everyone be treated equally, and he invited Martin Luther King Jr. to offer a prayer at one of his Madison Square Garden rallies in 1957. Though not an aggressive campaigner on behalf of civil rights, Graham's support for racial integration earned him the enmity of the Ku Klux Klan and Southern segregationists."

Graham's funeral takes place Friday at the Billy Graham Library in Charlotte, N.C., and Trump is scheduled to attend.

Graham will be buried beside his late wife, Ruth, in the Library's Prayer Garden.