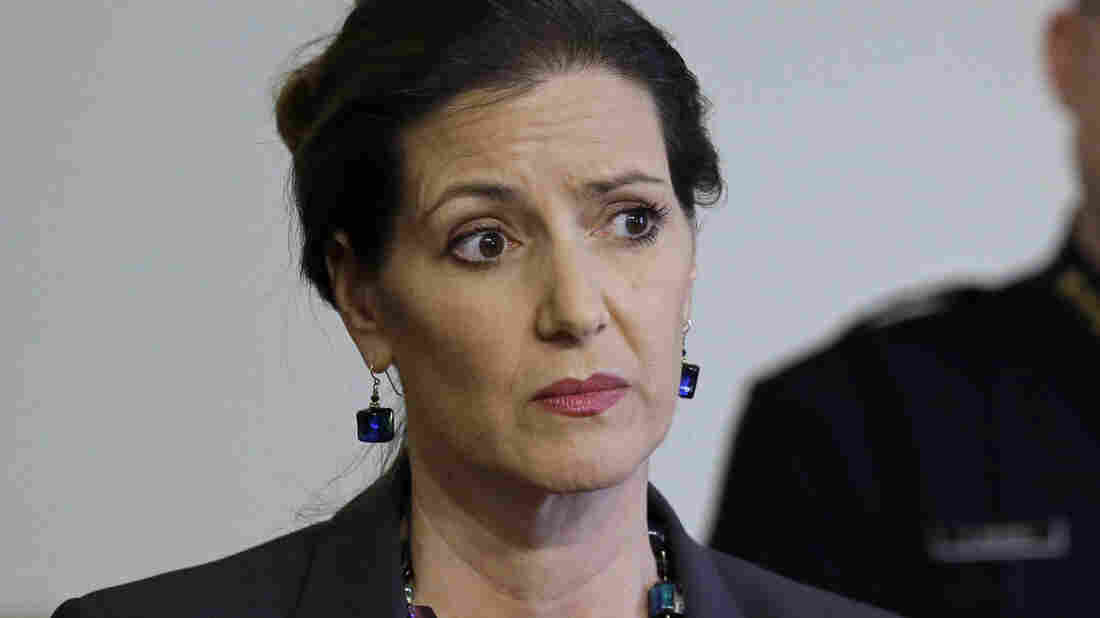 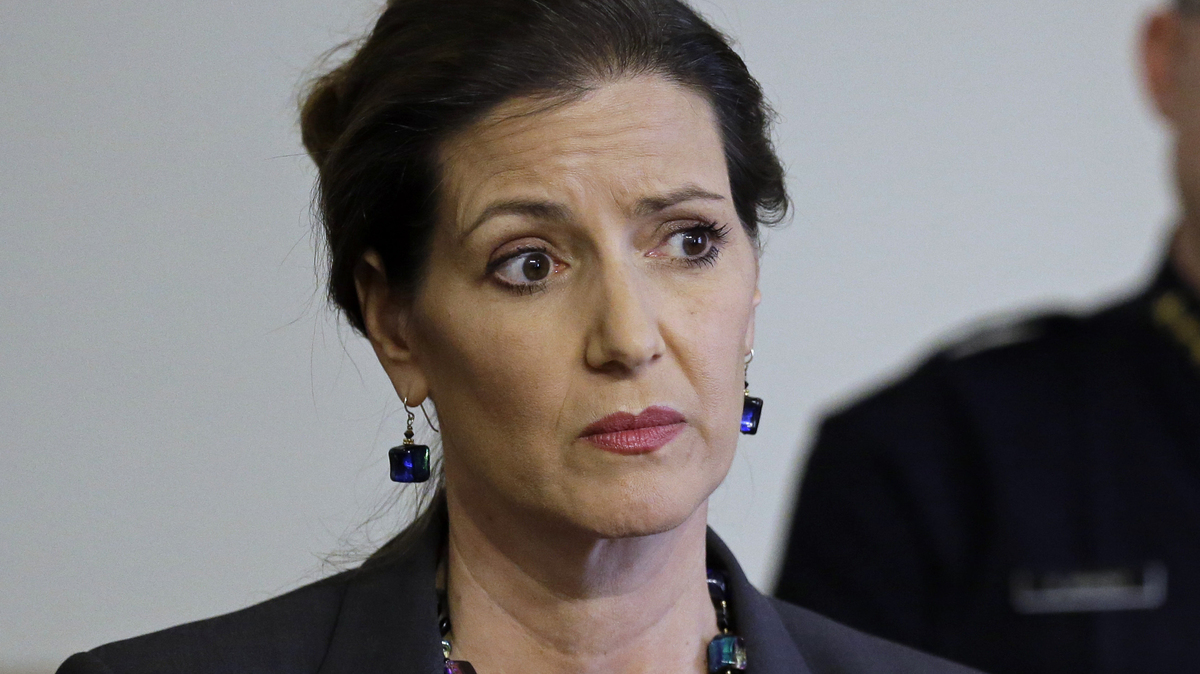 Oakland, Calif., Mayor Libby Schaaf, seen here at a 2016 news conference, said Tuesday she did not regret warning residents of an impending ICE operation over the weekend.

Oakland, Calif., Mayor Libby Schaaf says she has no regrets about warning residents of an impending raid by Immigration and Customs Enforcement, even as the agency blasted the move as politically motivated and reckless.

It comes as sanctuary jurisdictions — a loose term generally used to describe areas whose laws do not require cooperation with federal immigration officials — butt up against the Trump administration's crackdown on enforcement.

The dispute began on Saturday when Schaaf posted a message on Twitter saying she had learned from "multiple credible sources" that ICE "is preparing to conduct an operation in the Bay Area, including Oakland, starting as soon as within the next 24 hours."

Schaaf said she wanted residents to "prepare, not panic," and urged people to know their rights, directing them to a legal services agency geared toward Latino immigrants.

Schaff said the city's "law-abiding immigrants and families ... deserve to live free from the constant threat of arrest and deportation" and she considered it her "duty and moral obligation as Mayor to give those families fair warning when that threat appears imminent."

But ICE said the warning was anything but fair. By Tuesday the agency confirmed it did indeed conduct an operation and blamed Schaaf for likely allowing many "targets" to slip away.

ICE Deputy Director Thomas D. Homan said in a statement that Schaaf's warning endangered officers "and alerted criminal aliens – making clear that this reckless decision was based on her political agenda."

Despite the warning, Homan said officers "were able to remove many public safety threats from the streets of the Bay Area during the past few days." But he added that more than 800 people the agency had been targeting "remain at large in the community."

"I have to believe that some of them were able to elude us thanks to the mayor's irresponsible decision," he said.

Homan told Fox & Friends on Wednesday that what Schaff did "is no better than a gang lookout yelling 'Police.'" He also said the Department of Justice is reviewing whether Schaff broke any laws.

Schaaf has not backed down. "I do not regret sharing this information," she said in a statement Tuesday. "It is Oakland's legal right to be a sanctuary city and we have not broken any laws. We believe our community is safer when families stay together."

Around 200 people took to the streets Wednesday outside ICE's San Francisco office chanting "shut ICE down" and carrying signs reading "Stop racist deportations," according to The Associated Press. 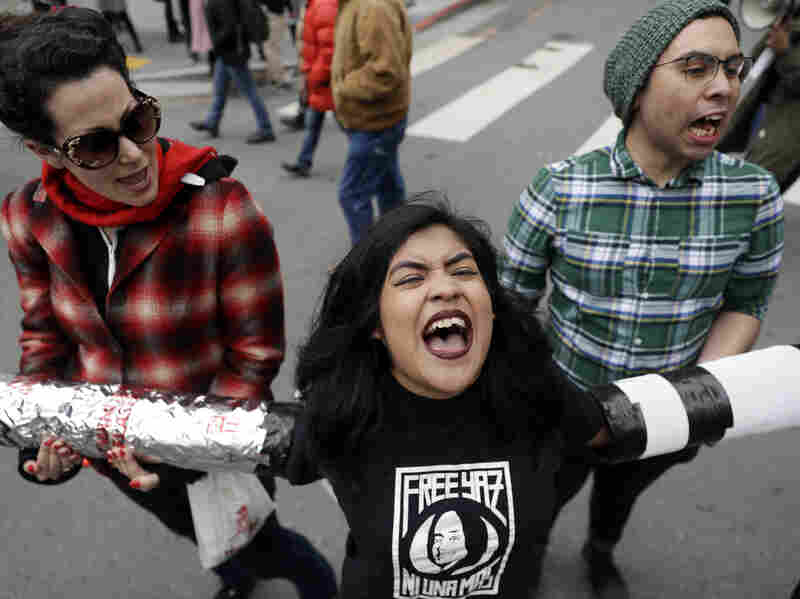 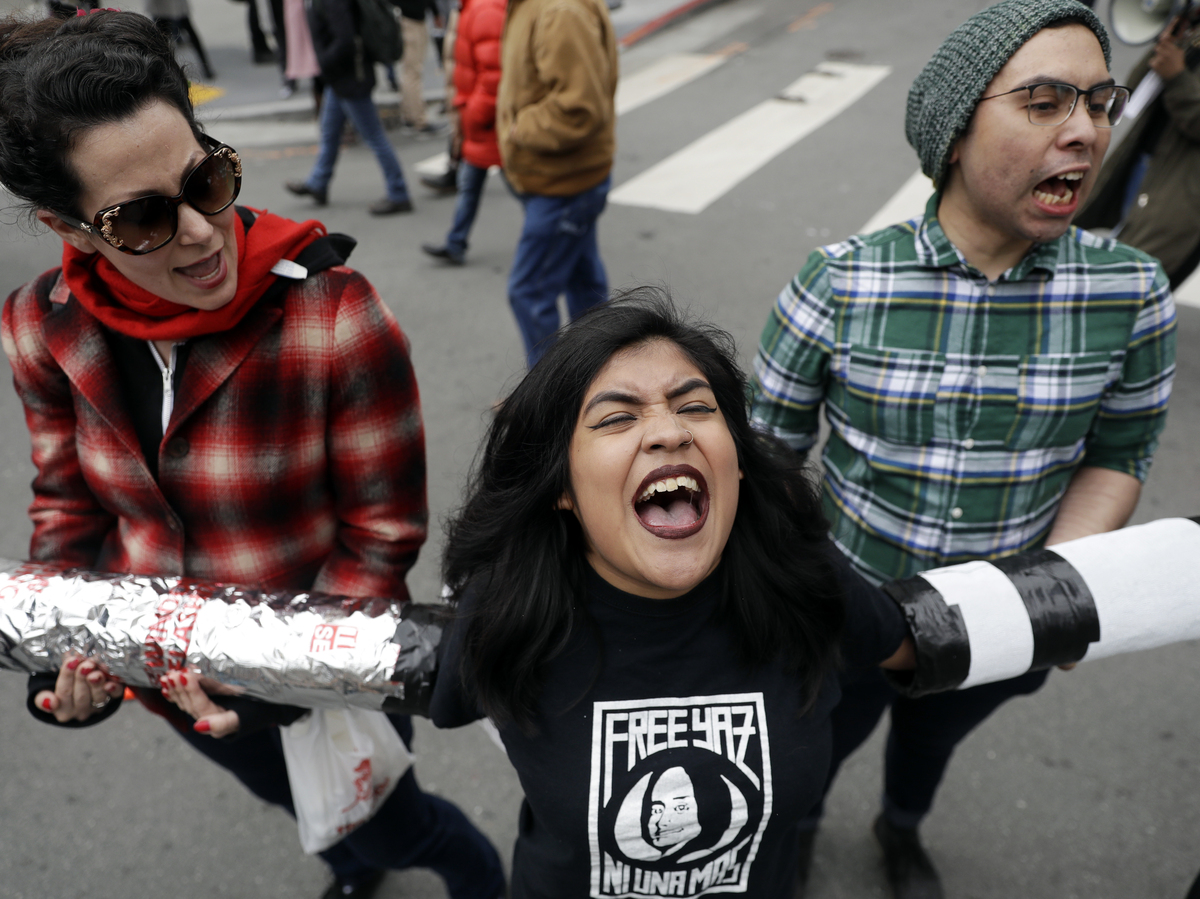 Demonstrators, including Valeria Suarez, center, yell slogans outside the Immigration and Customs Enforcement offices on Wednesday, protesting weekend raids in the Bay Area.

Beginning with his 2015 campaign announcement, Trump has made immigration a signature issue alongside pledges to build a wall. "The U.S. has become a dumping ground for everybody else's problems ... When Mexico sends its people ... They're bringing drugs. They're bringing crime. They're rapists. And some, I assume, are good people," he said at the time.

California has been fighting back.

At the beginning of the year, state Senate Bill 54, otherwise known as the California Values Act, took effect limiting immigration enforcement, in part by barring local authorities from asking about immigration status during routine interactions.

"This bill does not prevent or prohibit Immigration and Customs Enforcement or the Department of Homeland Security from doing their work in any way," Gov. Jerry Brown, a Democrat, said in a signing message. "They are free to use their own considerable resources to enforce federal immigration law in California."

But in his statement Tuesday, Homan of ICE said, "Sanctuary jurisdictions like San Francisco and Oakland shield dangerous criminal aliens from federal law enforcement at the expense of public safety." He went on, "Unlike the politicians who attempt to undermine ICE's critical mission, our officers will continue to fulfill their sworn duty to protect public safety."

Homan said the Bay Area operation yielded the arrests of Mexican and Guatemalan citizens who had gang affiliations as well convictions for battery, DUI and sex acts with a minor.