Accessibility links
Some Of The Oldest-Ever Tattoos Found On Egyptian Mummies : The Two-Way Thanks to new technology, archaeologists in the British Museum have just discovered what they say are the earliest-known body art displaying figures. 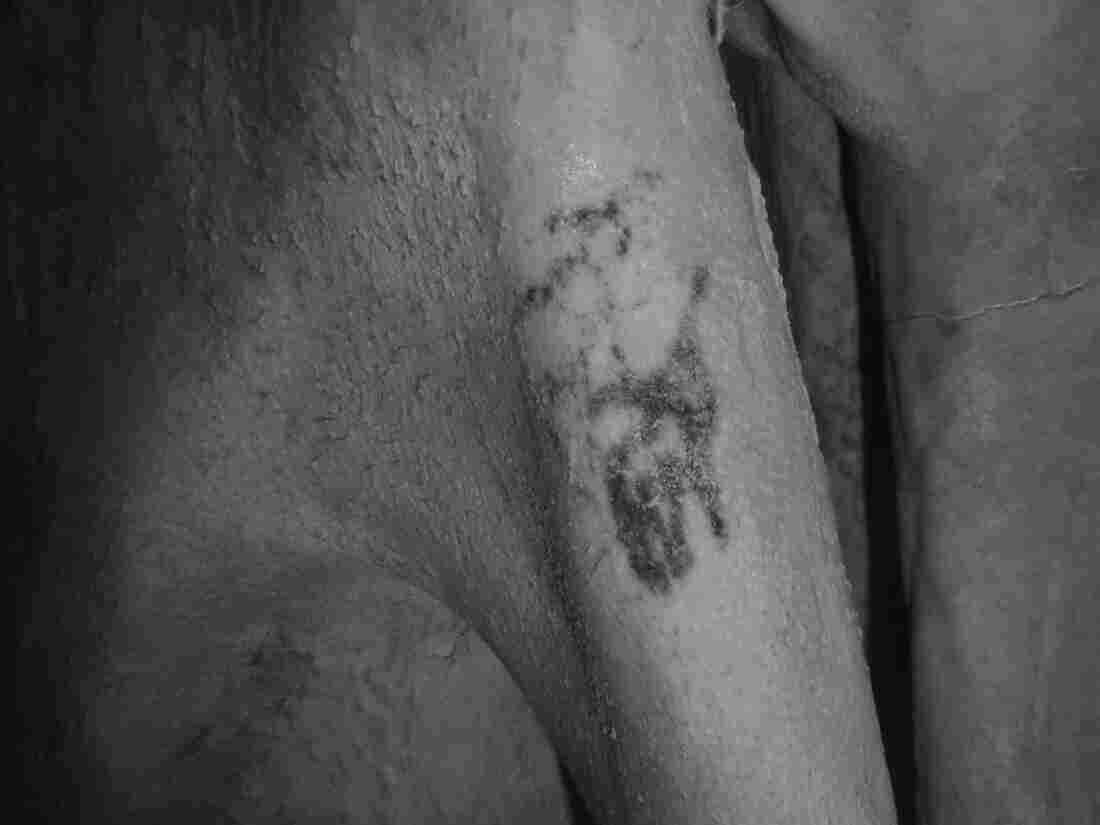 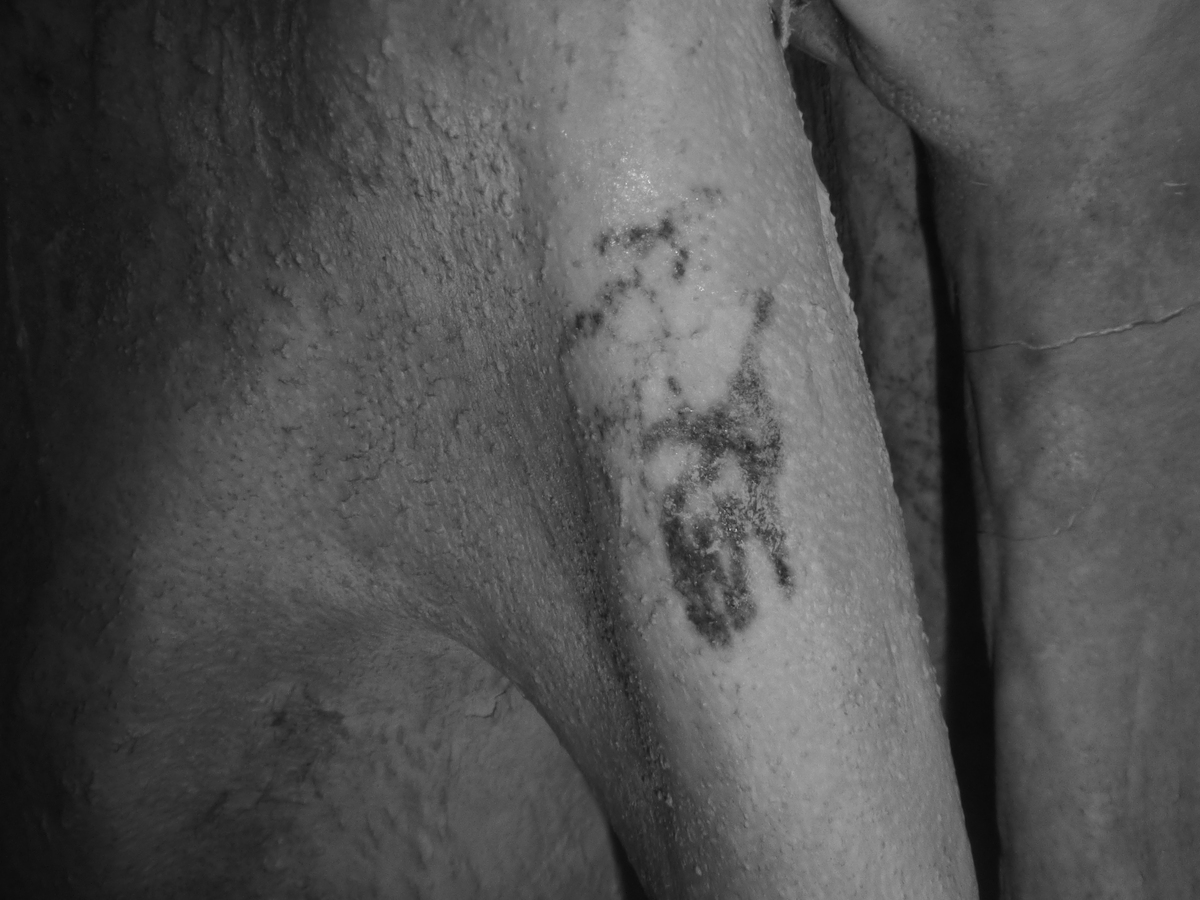 The two well-preserved mummies from Egypt's Gebelein site – a male and a female — have been in the British Museum's collection for more than 100 years.

But thanks to new technology, archaeologists have just discovered that they have some of the world's oldest tattoos – and what they say are the earliest known to contain figures.

Oxford professor Renee Friedman had been using a handheld infrared camera to examine tattoos on mummies from about 1,000 years later, in the Middle Kingdom period.

Shortly after that work, she was coordinating a project at the British Museum, home to these mummies, which had been excavated and brought to the U.K. in 1899. Radiocarbon dating indicates that they are likely from 3932 to 3030 BC, the predynastic period.

"I said, hmm, why don't I try my little camera on these well-preserved bodies?" Freidman tells The Two-Way. It was "a big surprise when these tattoos just popped out under infrared," she laughs.

"It's quite remarkable what has gone undetected that, now, new technology, a little hand-held pre-converted infrared camera, is unlocking — a whole new world for us of body modification at such an early time," she adds. The team's findings were published this week in the Journal of Archaeological Science.

For a century, the markings had been mistaken for a meaningless smudge. But the infrared imaging showed that they were actually well-known motifs common to the predynastic period.

What We Know About Tattoo Reactions Only Goes Skin-Deep

On the male's right shoulder are two animal forms. "He's got a Barbary sheep, an animal with these down-curving horns, and below that he's got some sort of a cattle figure," says Friedman, adding that these were symbols of power and virility. "They might be badges of bravery, of his skill. His trophies." 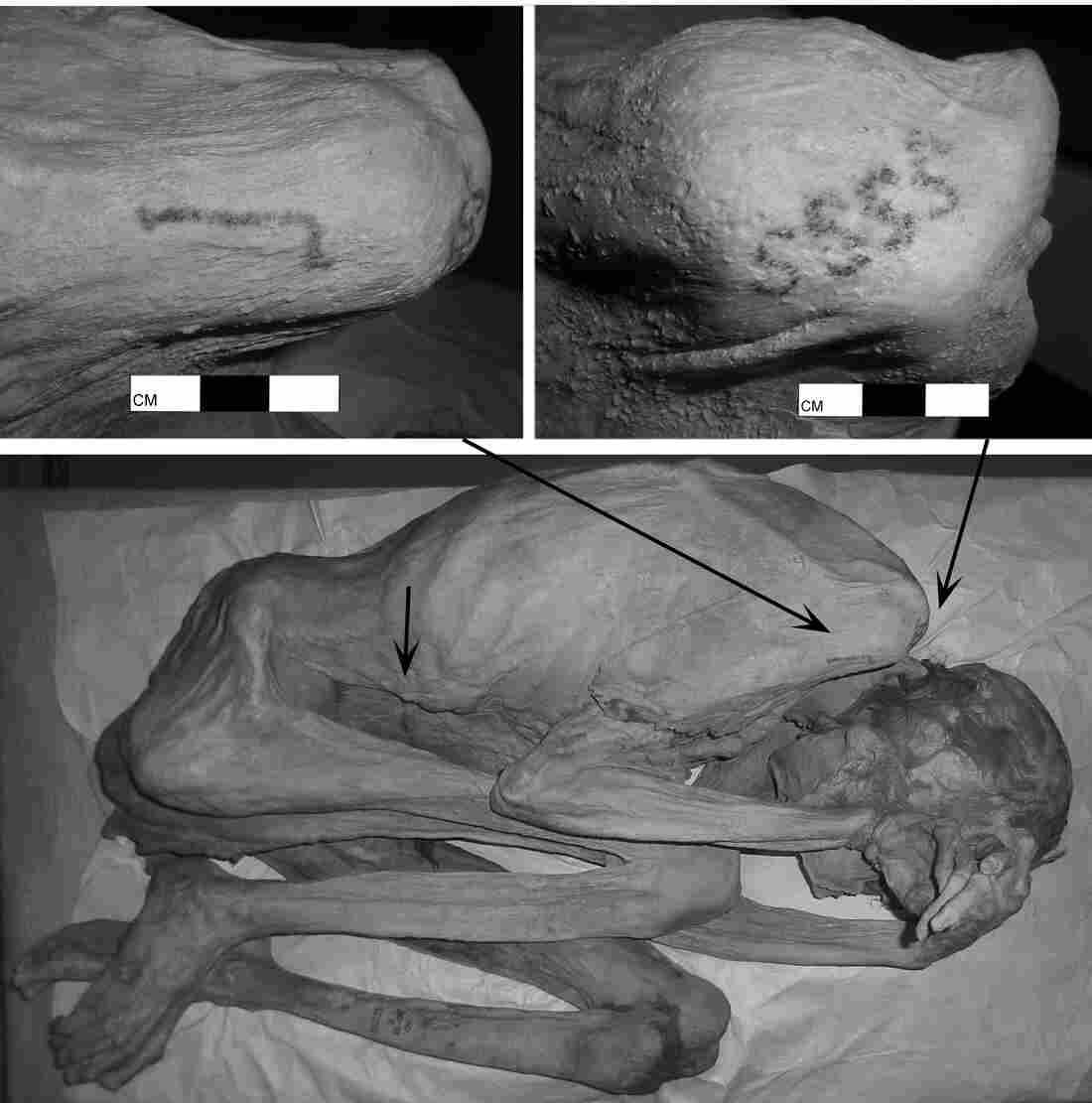 Infrared imaging of a female predynastic mummy reveal a tattooed "S" pattern and a marking that Egyptologists believe shows an item used in rituals. Courtesy of Renee Friedman hide caption

The female's tattoos are also on her right arm. They include a series of S shapes – "those marks are known from the contemporary pottery of the time, though we don't know what it means." Another marking, Friedman says, is likely a set of ritual clappers. "So we think her markings are more associated with cult knowledge, knowing the proper moves, knowing the proper rituals and spells."

The scientists think the tattoo ink was made using soot, and the fact that it is carbon-based allowed the infrared camera to pick it up very strongly. It's also worth noting that these mummies were not intentionally preserved, like later mummies in ancient Egypt. But this particular site is known for its well-preserved bodies, likely due to the climate.

It was a surprise to find the tattoos on a male mummy. Friedman says other, later female Egyptian mummies with tattoos had been discovered, and a set of figurines with drawings on them did suggest to Egyptologists that tattoos likely existed at the time for women. The male's body art "was a real game changer in our perceptions of tattooing," she says.

These markings are roughly contemporaneous with Otzi, a man who was preserved in ice in Europe and dates back to the late 4th millennium BC. However, archaeologists have suggested that his tattoos may have had a medicinal purpose – Friedman suggests they could be an early form of acupuncture.

These Egyptian tattoos, she says, were meant for show. "They're in parts of the body that would have been on daily display," she says, adding to what we already know about predynastic fashion. "You're showing off tattoos, we know that they had colorful clothing, they had colorful leather. They probably looked fabulous."

The find adds another layer to the complicated and diverse history of tattoos. "It's interesting, it must be this human phenomenon to want to permanently modify your body. It seems to be very cross-cultural but for a variety of different reasons," Friedman adds.

The mummies are on display at the British Museum and she says the tattoos are visible if you look carefully.

If this has piqued your interest in the history of tattoos, you can check out the Los Angeles County's Natural History Museum which is currently holding an exhibition about the art form.