Accessibility links
'Bomb Cyclone' Brings Wind, Flooding And Snow To Northeast, Killing Several : The Two-Way While the storm had moved offshore Saturday, flood threats remained, especially along coastal Massachusetts, where crews have rescued scores of people. The governor has declared a state of emergency. 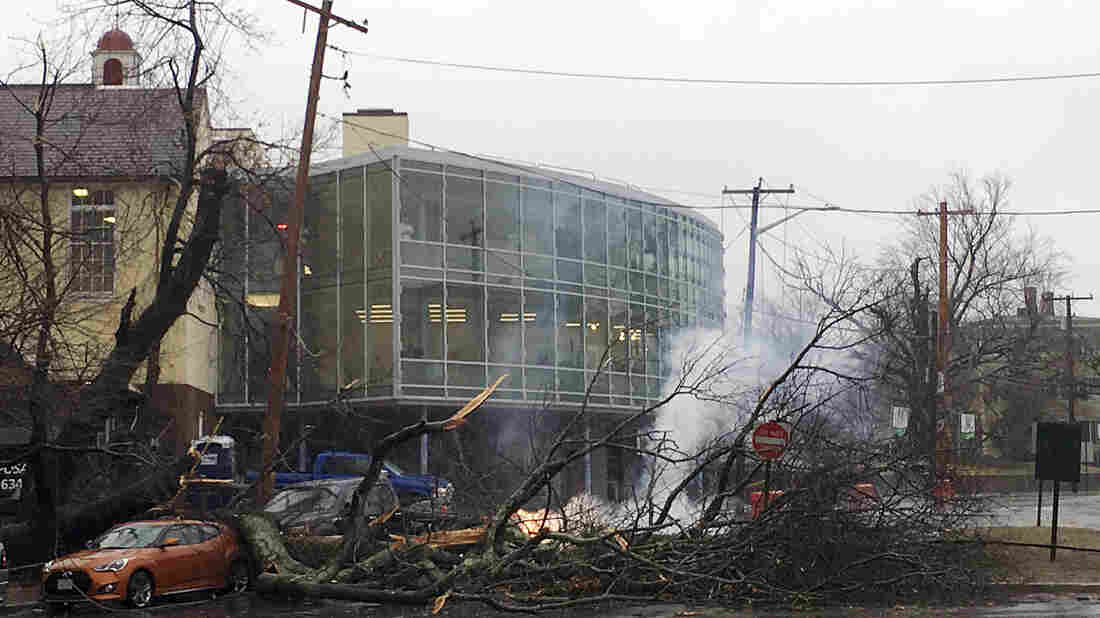 Power lines smolder behind a fallen tree outside the Lincoln School in Providence, R.I., during the nor'easter Friday. Matt O'Brien/AP hide caption 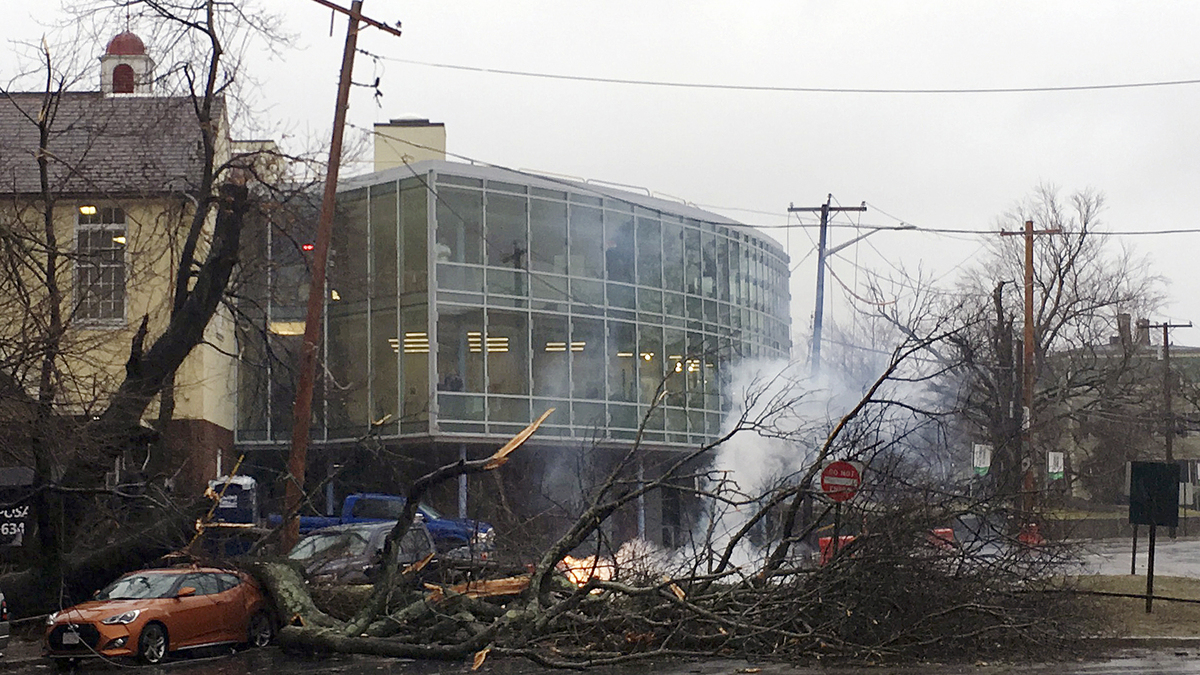 Power lines smolder behind a fallen tree outside the Lincoln School in Providence, R.I., during the nor'easter Friday.

The storm system that pummeled much of the East Coast on Friday had moved hundreds of miles offshore by Saturday, but residual wind gusts and coastal flood threats, exacerbated by high tide, continued to plague the region from Maryland through Maine.

Scientists say the storm has met the definition of a "bomb cyclone," a dramatic name that seemed fitting for the vast damage already wrought over the region Saturday.

"It really just refers to a strong low pressure system that intensifies very rapidly," said Patrick Burke, a lead forecaster with NOAA's Weather Prediction Center. "What it means is very intense winds, like you saw across all of the East Coast."

Gusts hit 70 mph Friday, but the highest was recorded in Barnstable, Mass., on Cape Cod, at 93 mph, Burke said.

In all, at least nine people reportedly died from trees or limbs crashing down.

In Putnam County, N.Y. police said an 11-year-old boy died Friday afternoon after a tree crashed onto his home. In Chesterfield County, Va., another child, age 6, lay asleep in his bed in the early morning hours Friday when a tree toppled on his residence, killing him, said the county in a statement.

Seven other people were killed — all adults in Virginia, Maryland, Pennsylvania, Connecticut, Rhode Island and Massachusetts — all from falling trees or branches, according to The Associated Press.

The winds also brought down power lines, leaving around 2 million people in the cold and dark Saturday, mainly in Pennsylvania, Massachusetts, New York, Maryland and Virginia, according to poweroutage.us.

Amtrak resumed modified service with significant delays between Washington, D.C., and New York City on Saturday, after shutting down a day earlier.

Flights were beginning to get back to normal following thousands of cancellations and delays Friday. But the website FlightAware, said residual problems remained at airports around Washington, D.C., up through Boston.

Airports advised passengers to check with their airlines and leave extra time for travel.

Due to weather, many airlines are cancelling flights. Please check with your airline for the latest information about your flight before heading to Logan.

Mass. Gov. Charlie Baker declared a state of emergency Saturday for "what is anticipated to be a prolonged recovery effort." (The governors of Maryland and of Virginia had also made declarations on Friday.)

On Thursday, Baker activated the National Guard to assist with evacuation and rescue efforts.

The National Weather Service warned of more flooding to come along the Massachusetts coast, including Boston.

Coastal flooding like Whoa in New England. Here’s a current view of Park Lane in Boston near Newbury street. pic.twitter.com/984DV5Hu3B

"Vulnerable structures along the immediate shoreline will again be vulnerable for damage from waves on top of high water levels for the midday high tide," NWS said.

Boston's downtown near the waterfront experienced flooding Friday. The tide surpassed 14 feet reports The Boston Herald, and "sent water pouring into the Blue Line's Aquarium Station and waves lapping into streets and onto restaurant patios."

Streets in downtown Boston are flooded from rain, and from rising water levels in Boston Harbor. The harbor is now at its 3rd highest level in history, and could rise even higher! pic.twitter.com/b4fa8ZJjd1

Quincy was hit hard too, as CBS Boston reported, "At high tide during Friday's nor'easter, Quincy was under water." Waves submerged cars and more than 100 people had to be rescued, the station reports.

We’re headed into Houghs Neck to rescue a family from a home. Remember, we’re in a vehicle, not a boat! pic.twitter.com/Y1dxWwztfc

In addition to rain and wind, the nor'easter also brought significant snowfall to some areas. "Across central and southern New York, one to three feet of snow fell very quickly from this storm," Burke said.