Accessibility links
Still No School In West Virginia As Salary Snag Ensures Strike Will Go On : The Two-Way The state Senate failed to pass the raise teachers are demanding. Now an end date for the strike is unclear as students face their eighth day of no school. 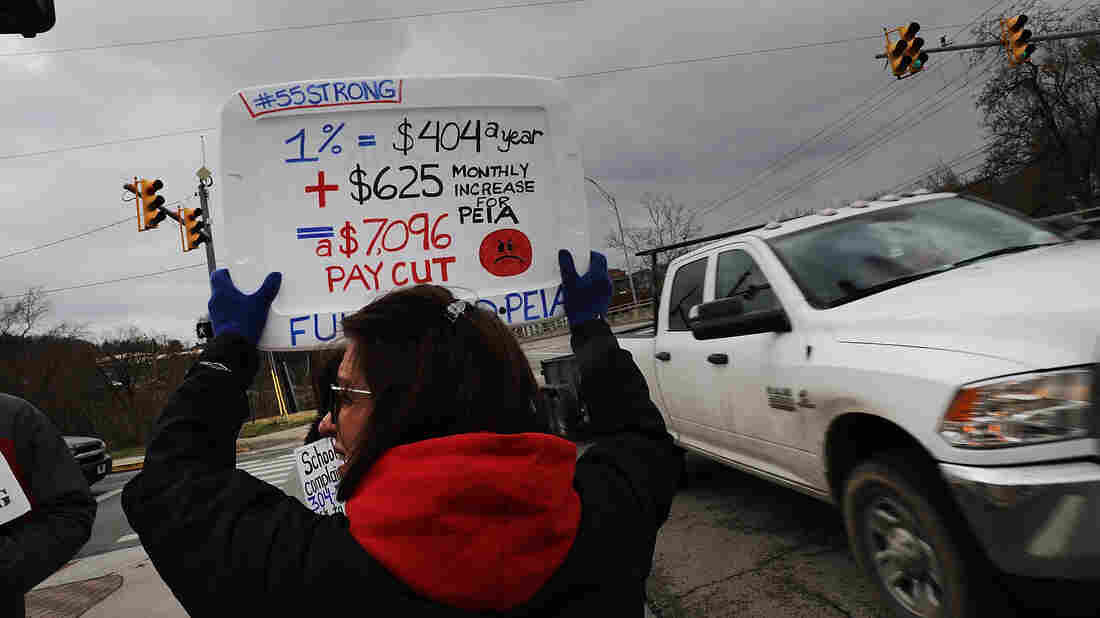 West Virginia teachers, students and supporters hold signs on a Morgantown, W.Va., street on Saturday. The strike is in its second weekend after the state Senate failed to pass the 5 percent raise teachers are demanding. Spencer Platt/Getty Images hide caption 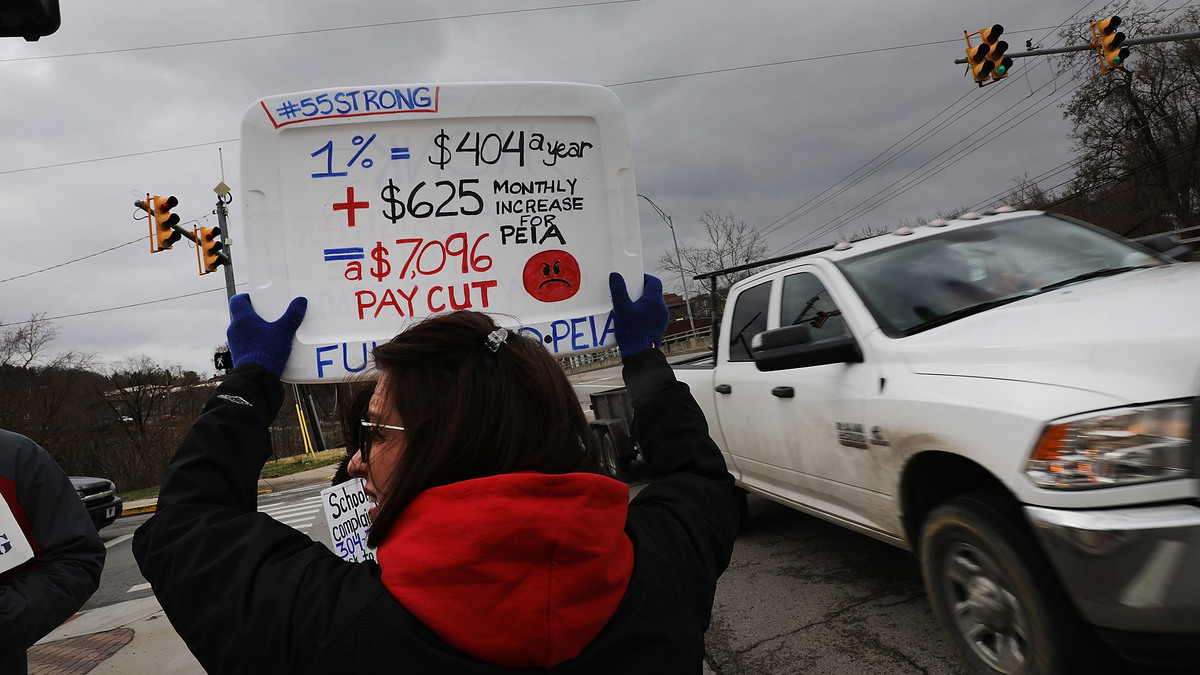 West Virginia teachers, students and supporters hold signs on a Morgantown, W.Va., street on Saturday. The strike is in its second weekend after the state Senate failed to pass the 5 percent raise teachers are demanding.

The union representing West Virginia teachers says their strike — begun Feb. 22 — will extend at least through Monday, if not longer, after the state Senate failed to pass the raise teachers are holding out for.

Senators voted for a 4 percent raise for teachers, service personnel and state troopers.

Republican Gov. Jim Justice and the Republican-led House of Delegates have already agreed to the 5 percent raise teachers are demanding.

Saturday night's Senate vote ran into a snafu after the Finance Committee was prepared to pass the 4 percent raise.

House members wouldn't agree to that change, and both sides appointed three members to a conference committee, which will try to hash out the differences on the bill."

"This might be one of the craziest legislative screw-ups in WV legislative history," the West Virginia Education Association posted on Facebook. "You can't make this stuff up."

As Jessica Salfia, an English teacher at Spring Mills High School in Berkeley County, W.Va., wryly told NPR's Weekend Edition, "apparently they need more teachers on-staff in the Senate to do some proofreading and editing."

But Gov. Justice, who maintains his support for the 5 percent raise, said in a statement that the mix-up misses the point.

Approximately 277,000 students are entering their eighth day of no school, as are 35,000 employees, according to The Associated Press.

"We are asking that all public schools in West Virginia be closed again on Monday and remain closed until the Senate honors the agreement that was made," said Dale Lee, president of the West Virginia Education Association.

WVEA is representing the strikers along with the state branch of the American Federation of Teachers and the West Virginia School Service Personnel Association, reports the AP.

The current impasse stands in contrast to the optimism felt last Tuesday when union leaders said the strike was ending, after Gov. Justice announced his support for the raise.

But getting the Senate on board was never a done deal.

"It feels like we're perhaps reacting to pressure as opposed to properly managing the fiscal affairs of our state," Carmichael said.

Republican Sen. Greg Boso proposed the amendment to reduce the raise, reports the Charleston-Gazette Mail, and said it would save money for a potential 4 percent raise for all public employees.

"He said while he believes teachers are underpaid, several sects of employees at the Capitol and beyond have gone longer than teachers have without a raise," the newspaper reports.

But Dale Lee, president of the West Virginia Education Association, said while teachers want other state workers to get the the same 5 percent raise, they won't settle for less for the sake of equality.

Democratic Sen. John Unger, who voted for the 5 percent raise, told NPR he is seeing a groundswell of support that he is calling "The West Virginia Spring."

"An amazing movement is happening here," he said.

"Make no mistake, this is a labor movement led mostly by women," said Salfia. "The women standing on the front lines of this movement right now are the granddaughters and the daughters of coal miners and they have watched their fathers and their grandfathers stand up for workers' rights."

Salfia said teachers will settle for nothing short of a legislative guarantee for the raise.

"There is a level of trust that does not exist right now," Salfia said.

In the meantime, Lee is asking teachers and others to continue protesting at the State Capitol on Monday.

"We must make sure that the Senate hears our voice and knows that we won't back down."

A previous version of this report described Berkeley County, W.Va., as being in a coal-producing part of the state. While some coal has been mined from the area over the years, coal production is not a major industry in the county.