Accessibility links
'Flippy' The Fast Food Robot (Sort Of) Mans The Grill At Caliburger : The Two-Way The international burger chain says Flippy, which is so-far operating at a single franchise restaurant in Pasadena, Calif., can grill 150 burgers per hour. 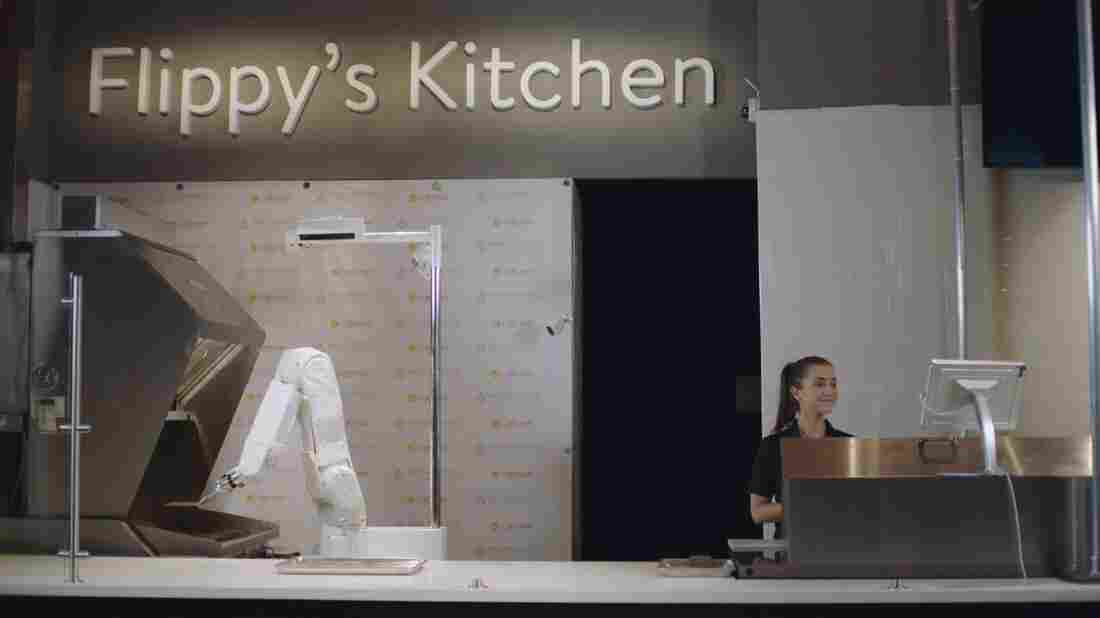 "Flippy," a burger-grilling robot developed by Miso Robotics, is now operating at a Caliburger in Pasadena. Miso Robotics hide caption

After months of practice in the art of fast food preparation, "Flippy," has finally taken up a position as grill cook on the line at Caliburger's Pasadena, Calif., restaurant.

"It's not a fun job — it's hot, it's greasy, it's dirty," acknowledges John Miller, the CEO of Cali Group, which runs the international fast food chain.

Even so, it could be the beginning of a bright career for Flippy in an industry that is otherwise notorious for high employee turnover.

It certainly helps that Flippy, a burger-flipping robot developed by Miso Robotics, shows no concern about the low wages, meager benefits or long hours that plague the industry. The robot is reportedly capable of grilling 150 burgers per hour.

According to a press release from Miso, the company — which bills Flippy as the world's first burger-flipping robot — began working with Caliburger two years ago to develop it as a "cost-effective and highly efficient solution" that is "specifically designed to operate in an existing commercial kitchen layout and to serve alongside kitchen staff to safely and efficiently fulfill a variety of cooking tasks."

"The kitchen of the future will always have people in it, but we see that kitchen as having people and robots," said David Zito, co-founder and CEO of Miso Robotics tells KTLA in Los Angeles. "This technology is not about replacing jobs — we see Flippy as that third hand."

In its current version, Flippy needs a human coworker to place the patties on the grill, put the cheese on top at the right moment and add the extras, such as lettuce and sauce before wrapping the sandwiches for customers.

"The Flippy robot takes the form of a relatively small, wheeled cart equipped with a 6-axis robotic arm and what Miso Robotics calls a 'sensor bar,' TechCrunch writes. "It takes in data from thermal sensors, 3-D sensors and different cameras onboard to perceive its environment. Digital systems that send tickets from the counter back to the kitchen give Flippy its orders."

TechCrunch says unlike rival burger bots under development, such as one made by Momentum Machines, Flippy uses artificial intelligence to improve its technique – so the more it works, the better it gets at the job, in much the same way that might be expected from a human worker.

The website adds: "A range of different tools, like detachable grippers, tongs and scrapers, help Flippy to cook burgers made to order, and keep a grill operating smoothly. A pneumatic pump allows the robot to swap out its own tools. Combined with Miso Robotics' AI, this range of tools will allow Flippy to make more than burgers over time, including chicken, bacon, grilled onions and other items that tend to be served in burger restaurants."

As part of its deal with Miso, Caliburger gets exclusive rights to use the services of Flippy for six months, but thereafter, other fast-food vendors would be allowed to buy the robot. In its current form, Flippy runs about $60,000 per unit, but the price could go up as it becomes more sophisticated and versatile.

For now, the robot is operating only in a single Pasadena, Calif., Caliburger restaurant, but the chain has plans for expansion within the U.S. after a trial period.

Although Miso and Caliburger emphasize that Flippy will be part of an integrated, part-robot, part-human, kitchen, according to a report by the McKinsey Global Institute last year, fast food was among the industries most vulnerable to automation.