Accessibility links
A Homeless Man's Truck Is His Home, Judge Rules In Seattle : The Two-Way That means the city can't impound it, and the judge ordered that towing fees be refunded. A count last year found that more than 2,000 people who were homeless in Seattle were living in vehicles.

A Homeless Man's Truck Is His Home, Judge Rules In Seattle

A Homeless Man's Truck Is His Home, Judge Rules In Seattle 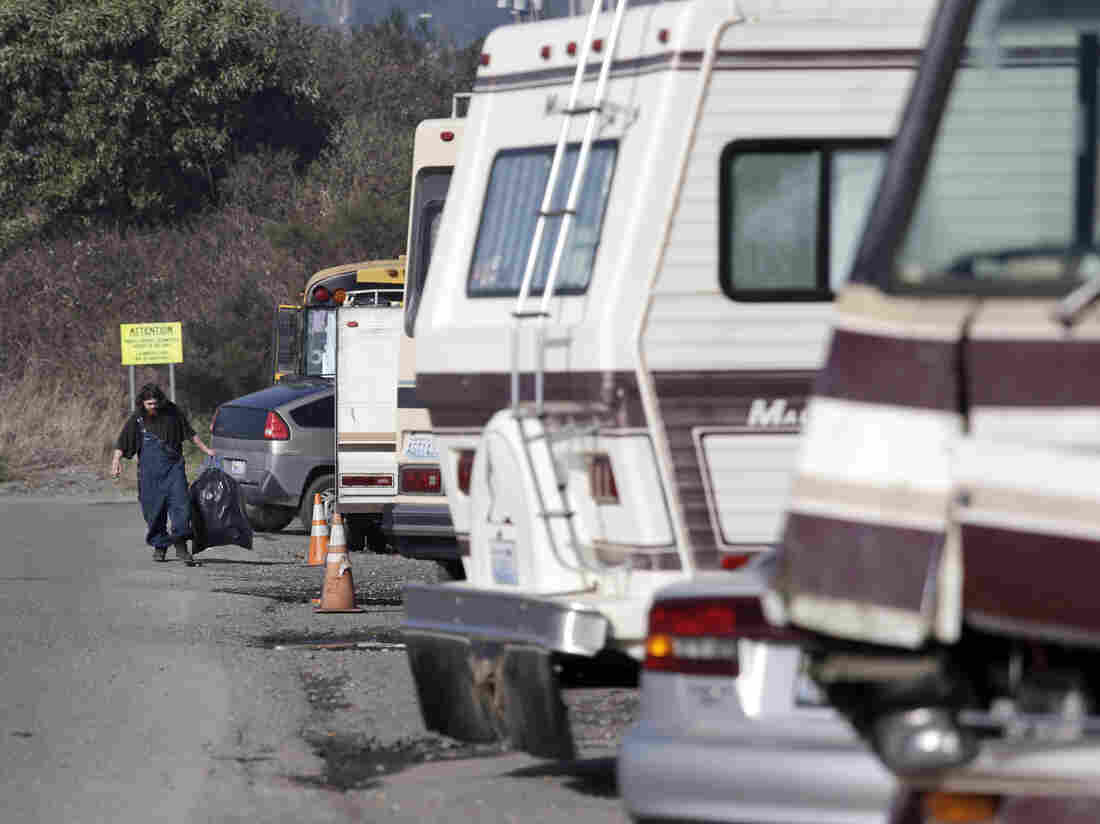 A King County, Wash., Superior Court judge ruled Friday that the truck a Seattle man was living in is his home, and thus can't be impounded. Here, a man hauls garbage at a temporary parking area for people living in their vehicles in Seattle in 2016. Elaine Thompson/AP hide caption 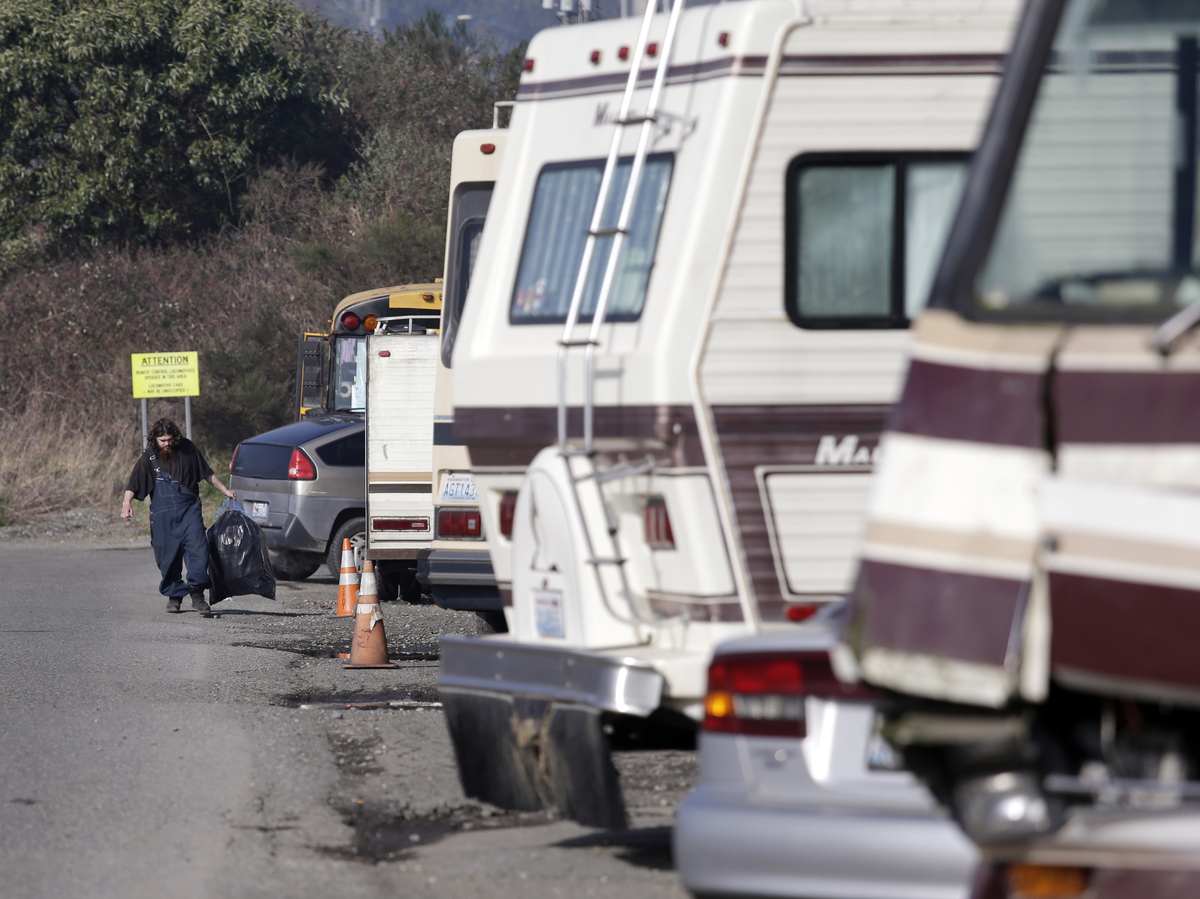 A King County, Wash., Superior Court judge ruled Friday that the truck a Seattle man was living in is his home, and thus can't be impounded. Here, a man hauls garbage at a temporary parking area for people living in their vehicles in Seattle in 2016.

In a case that may have a significant implications for Seattle's fast-growing homeless population, a King County Superior Court judge ruled on Friday that the pickup truck a man was living in was his home.

The case concerns a 57-year-old man named Steven Long, whose pickup was impounded because it was improperly parked and he didn't move it every 72 hours. Long was living in the truck while working as a janitor at CenturyLink Field, and he said the vehicle wasn't running well enough to move it.

Because of Washington's frontier-era homestead law, the judge's ruling means the city can't impound the truck. The judge also ordered the city to refund the fees Long was levied for the towing and impoundment, saying Seattle violated constitutional protections against excessive fines.

The city argued that impounding Long's truck was not a "forced sale" and that the courts "have consistently held that there is no constitutional right to housing," KIRO reports. The city is considering whether to appeal.

The ruling follows a decision by a judge in Clark County who found that police officers in Vancouver, Wash., had violated a homeless man's right against unreasonable search and seizure when they lifted the tarp he was sleeping under, found a bag of meth, and arrested him.

The Clark County prosecutor's office was critical of that ruling.

"Are we asking our officers to go get warrants now for every person in a park who throws a blanket over themselves?" said Clark County senior deputy prosecuting attorney Rachael Probstfeld, The Stranger reports. "Like a cloak of invisibility? Like 'Oh this is my dwelling now'?"

But advocates for the homeless say poor people deserve the same protections as those living in traditional housing.

"If this person had rented wooden walls, we wouldn't have this debate," Tristia Bauman, senior attorney at the National Law Center on Homelessness & Poverty, told the Stranger. "It would be unquestionable that the police overstepped their bounds. But because this person is poor, then there becomes a debate about whether this person even had a home and has any of the fundamental guarantees afforded to the rest of us."

The King County decision draws attention to a population that often goes unnoticed: people who live in their vehicles.

Many West Coast cities are struggling with growing numbers of people experiencing homelessness as housing costs have spiked. The Associated Press reports that Washington's population of chronically homeless people has risen 67 percent since 2007, while nationally the rate has declined 27 percent.

For Some Seniors Without Housing, A Parking Lot Is Home

Some cities have established places for people living in their cars to park. Santa Barbara, Calif., for example, has a Safe Parking program with designated spots where they can park overnight, often in church parking lots. The program also provides services and outreach to the people living there – including necessities like bathrooms.

Los Angeles has an estimated 8,000 people living in vehicles, according to the Los Angeles Times. But as KPCC has reported, LA has been slow to get its own safe-parking program off the ground.

And Seattle now has just one vehicle safe zone, The Seattle Times reports, with plans to shut it down by the end of April. The newspaper says Seattle's parking enforcement officials work with a local homelessness organization to determine who is living in their vehicles so they don't face excessive fines.

Ann LoGerfo, one of the attorneys who worked on Long's case, told The Stranger she would like the Seattle decision to impact other cities, too.

"We're hoping the city and other cities across the state will look at this and rethink how they're treating people who have no other choice but to live in a vehicle," she said.