Accessibility links
Sri Lanka Declares Emergency Amid Buddhist Attacks On Minority Muslims : The Two-Way The violence, which began on Sunday, was reportedly triggered by a road-rage incident in which a Sinhalese Buddhist driver was beaten to death by a Muslim youth. 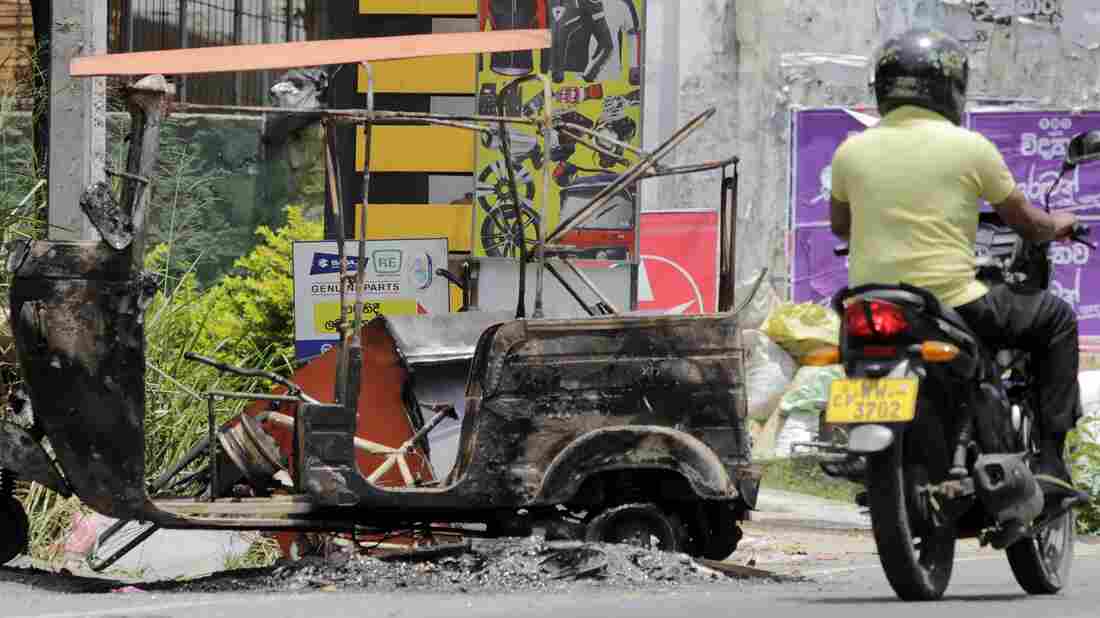 A Sri Lankan man rides his bicycle past a burnt vehicle on Wednesday, a day after anti-Muslim riots erupted in Digana, a suburb of Kandy. AFP/Getty Images hide caption 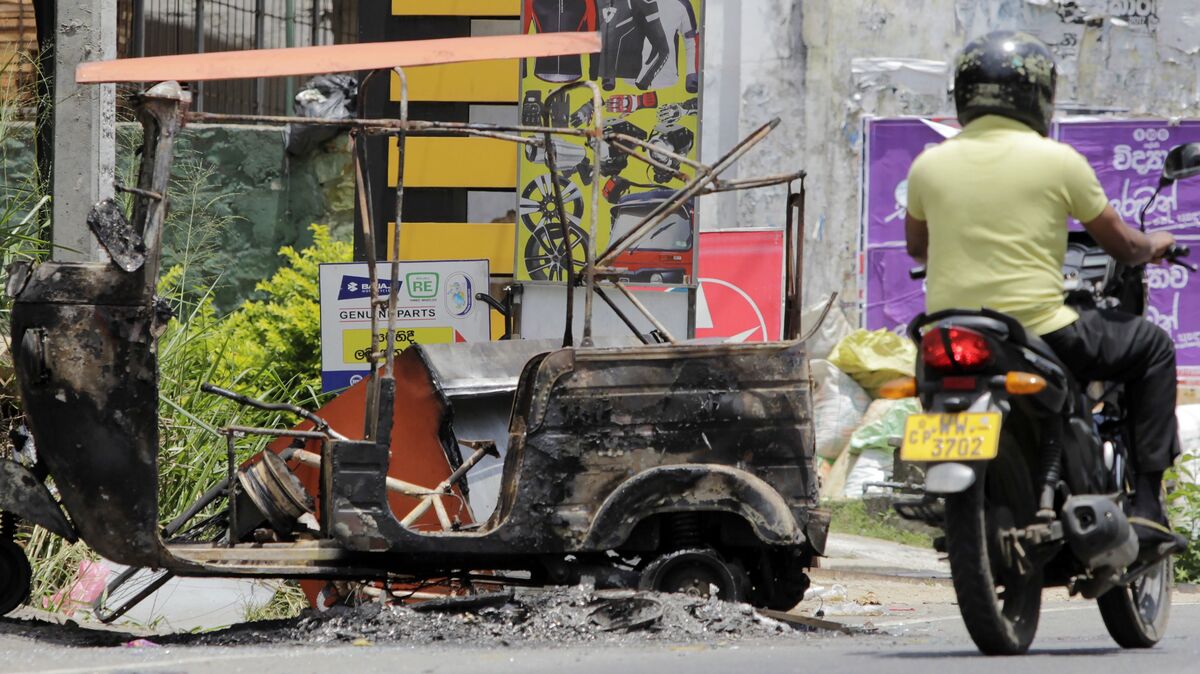 A Sri Lankan man rides his bicycle past a burnt vehicle on Wednesday, a day after anti-Muslim riots erupted in Digana, a suburb of Kandy.

Mobs made up mostly of Sri Lanka's predominately Buddhist Sinhalese majority torched Muslim homes and businesses in the island-nation's central hills near Kandy, a day after the government imposed a state of emergency to quell days of violence.

As NPR's Julie McCarthy reports tensions between the two communities, which burst into open hostility on Sunday, have been growing in recent months, with hardline Buddhist groups accusing Muslims of forcing people to convert to Islam.

According to Reuters, Muslims have also been targeted for allegedly vandalizing Buddhist archaeological sites and some Buddhist nationalists have "protested against the presence in Sri Lanka of Muslim Rohingya asylum seekers from mostly Buddhist Myanmar, where Buddhist nationalism has also been on the rise," the news agency writes.

"Hundreds of Muslim residents of Mullegama, a village in the hills of central Sri Lanka, barricaded themselves inside a local mosque after Buddhist mobs attacked their homes Wednesday morning accusing them of stealing the donation box of a nearby temple. At least 20 Muslim homes appeared badly damaged and flames engulfed one two-story home.

The Muslims hiding in the mosque, speaking on condition of anonymity because of fear of reprisals, said police prevented them from saving their property and did nothing to stop the attackers." 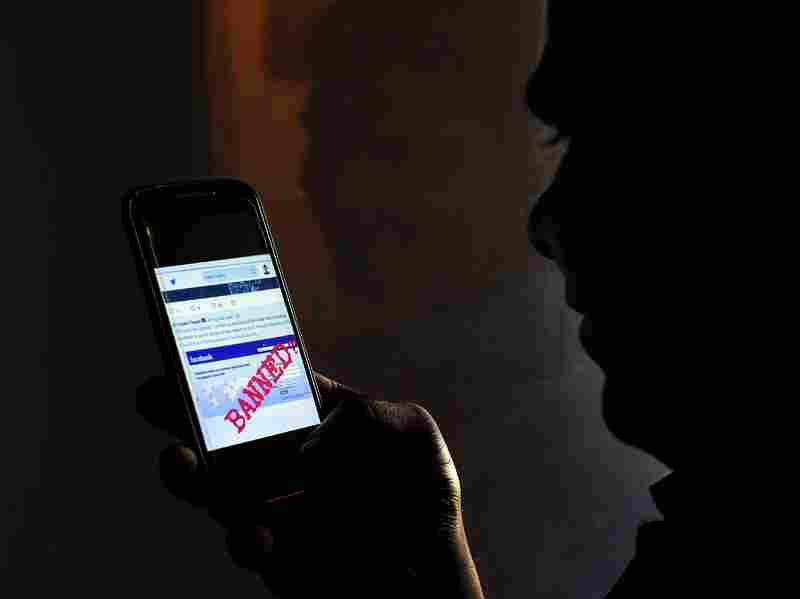 A Sri Lankan mobile phone user on Wednesday holds up a Twitter message indicating that Facebook has been banned in the capital, Colombo. Ishara S. Kodikara/AFP/Getty Images hide caption 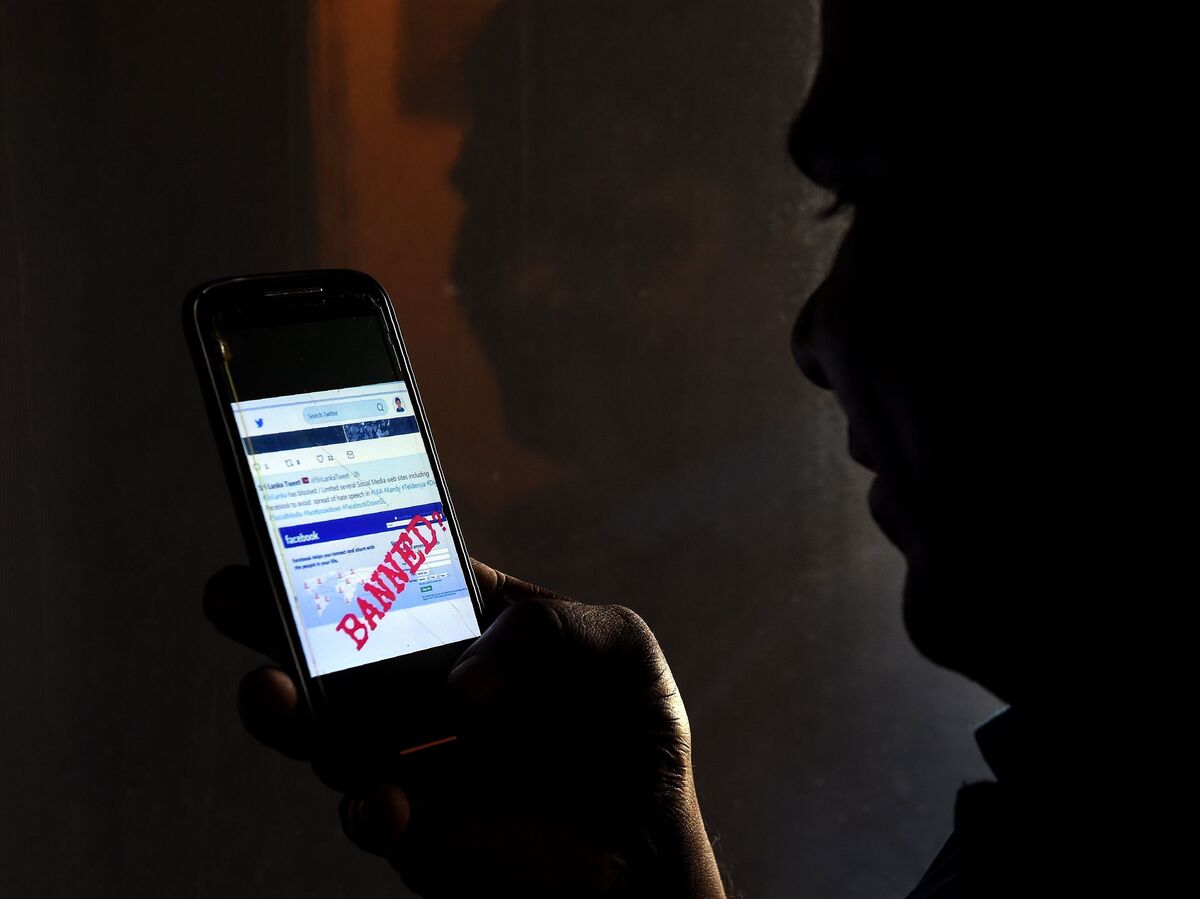 A Sri Lankan mobile phone user on Wednesday holds up a Twitter message indicating that Facebook has been banned in the capital, Colombo.

As part of the emergency decree issued on Tuesday, the government ordered telecommunication service providers to block access to Facebook, Viber and WhatsApp. Colombo says the social media platforms were being used by extremist groups to incite violence.

The Hindu newspaper in India writes that violence began Sunday as a road-rage incident "... in which a group of Muslim youth beat up a Sinhalese driver, who later succumbed to injuries. Police arrested the youth, and 24 other suspects in connection with the ensuing violence and arson attacks, which claimed the life of one Muslim youth in Digana town, Kandy. Amid mounting criticism of the police's 'poor response,' President [Maithripala] Sirisena on March 6 declared Emergency Rule – a move that, according to his Ministers, allowed the government to summon the Army into ground action."

Sri Lanka, located off the southeast tip of India, was the site of a bitter and protracted civil war that pitted the Sinhalese majority against minority ethnic Tamils, mostly Hindus, who sought to form an independent state in the north. The 26-year conflict that ended in 2009 resulted in the deaths of between 40,000 and 100,000 people.

Muslims comprise about 9 percent of Sri Lanka's population of 21 million, the smallest minority after Tamils.

Police ordered a curfew across much of the Central Province, which is now in its third day.

In a subsequent tweet, de Silva implored "We can only develop as a nation by being united; we will ruin our future if we once again try to kill each other."