Accessibility links
International Women's Day: Here Are Snapshots Of Celebrations Around The World : The Two-Way In Spain, millions went on a nationwide strike. In Uganda, men took over the chores from women. In South Korea, #MeToo made a show of force. Here are just a few of the dozens of events Thursday.

From even Thursday's earliest moments, just after midnight, demonstrators across the world began gathering to mark International Women's Day. In the hours since, there have been marches, rallies, presidential speeches and even a nationwide strike.

They were all inspired by the same celebration, but what demonstrators campaigned for, and how, covered a wide range.

Here's a glimpse of just a few of the notable events — and calls to action — plucked from sites around the globe. Plus vivid pictures, of course. 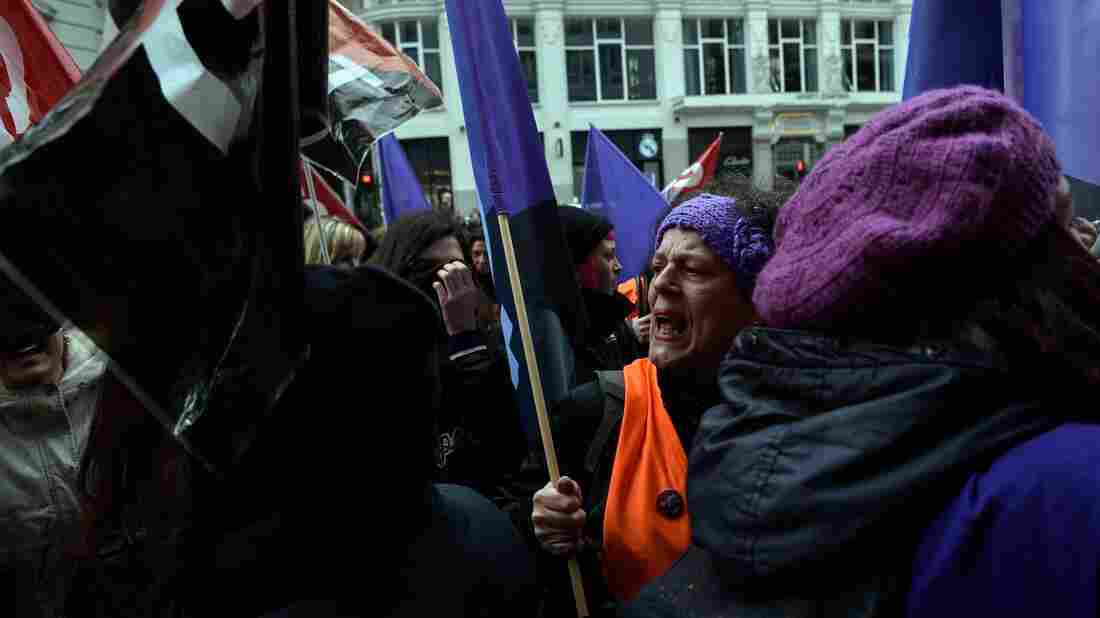 Picketers flooded a clothing store in Madrid during a one-day strike to defend women's rights on Thursday. The walkout called by unions asked women not to spend money and to ditch their domestic chores for the day. Oscar Del Pozo/AFP/Getty Images hide caption 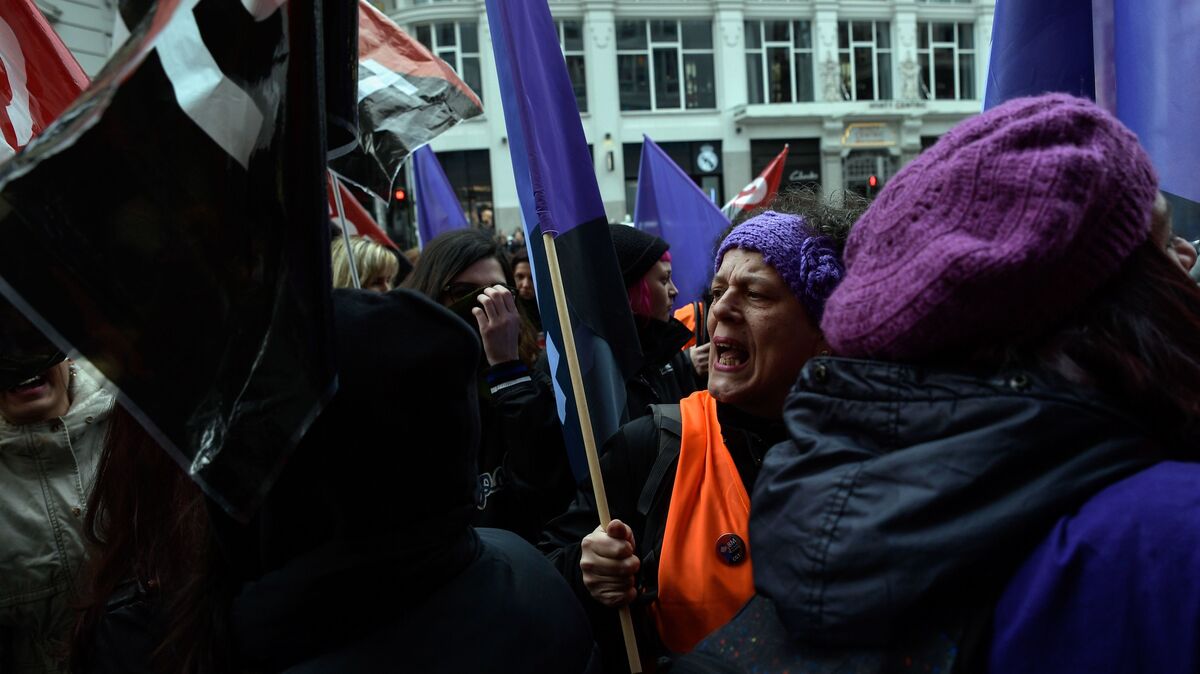 Picketers flooded a clothing store in Madrid during a one-day strike to defend women's rights on Thursday. The walkout called by unions asked women not to spend money and to ditch their domestic chores for the day.

As clocks turned midnight in Madrid, activists kicked off 24 hours' worth of walkouts aimed at calling attention to the gender pay gap and violence against women. Thousands of women took to the city's Puerta del Sol square, where they banged pots and pans outside the city council buildings bathed in purple lights.

The strike went nationwide, attracting the participation of more than 5 million women by the time the evening rolled around. Ten Spanish trade unions backed the walkout, which called on women to put down their tools, shut down their office computers and give their household chores a rest.

"If we stop, the world stops," went the slogan of the umbrella group behind the strike, which called for "a society free of sexist oppression, exploitation and violence."

"We do not accept worse working conditions," the group's manifesto said, "nor being paid less than men for the same work."

As Lauren Frayer reports for NPR, women in Spain are paid 13 percent less than men in the public sector and 19 percent less in private industry.

Among the millions of demonstrators were big-city mayors Ada Colau of Barcelona and Manuela Carmena of Madrid.

"It is not only about claiming real equality," Carmena tweeted Thursday, "but about confront the need to change the relationship between the world and women."

But the day's spectacles were not confined merely to city streets. In Castellón, on the country's east coast, activists planted 739 crosses on the beach — one for every woman murdered by her partner in the past decade. 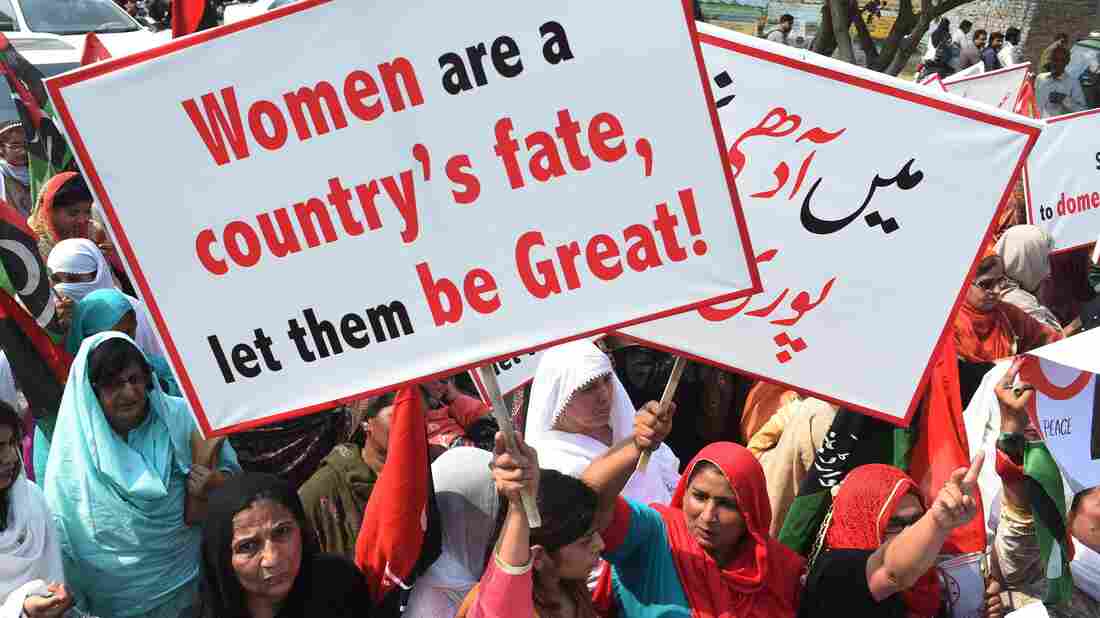 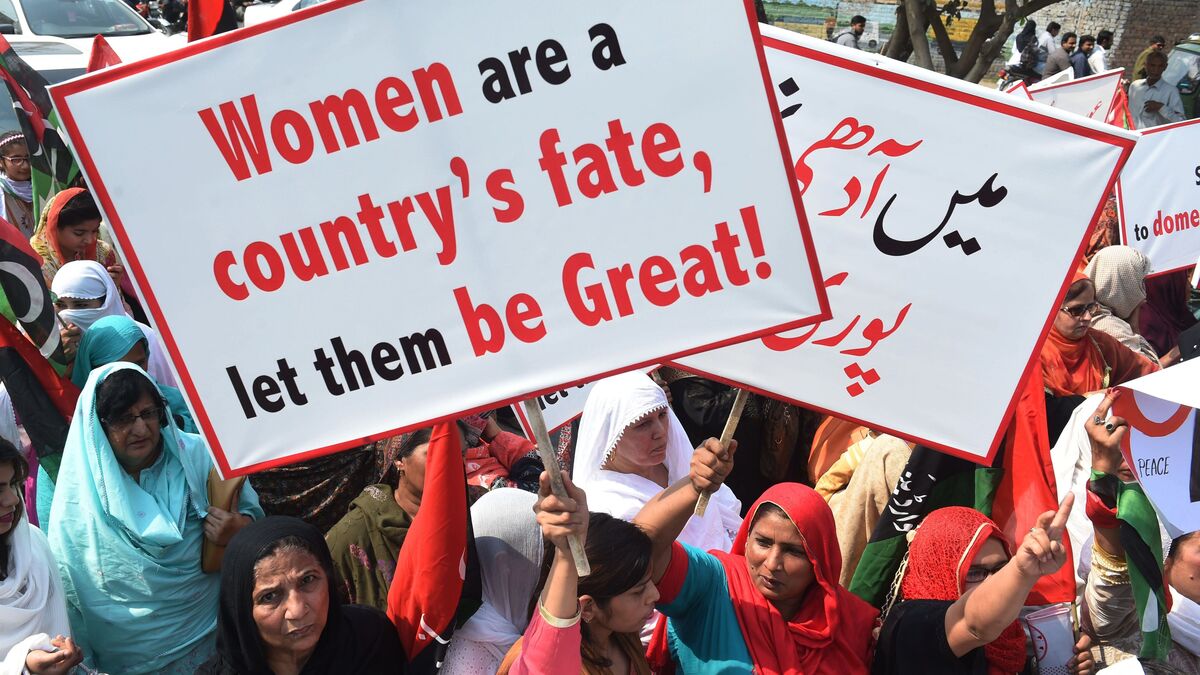 Supporters of the Pakistan Peoples Party chant slogans as they march in Lahore to mark International Women's Day.

Lahore, in Punjab province, held its first ever women's march, drawing a crowd numbered in the hundreds by organizers. Journalist Haleema Shah reported for NPR that a central focus of the march was access: allowing girls the education necessary for successful careers and supporting the women of the working class.

One of the marchers, speaking with Shah, defined freedom as the ability to own a business and the understanding that such endeavors should not be considered avenues to indecency.

Elsewhere — in such major cities as Karachi and the capital, Islamabad — activists pushed for stronger representation among lawmakers and condemned violence against women. NPR's Malaka Gharib reported in 2016 that an estimated 1,000 women are killed in "honor killings" each year, committed by close relatives who believe a woman has brought shame to her family.

"The reasons range from refusing an arranged marriage to owning a cellphone or even being a victim of rape," Gharib noted.

President Yoweri Museveni delivered a speech marking the day Thursday, focusing on how to prevent violence against women in the country — and specifically calling out men who commit such abuse.

"A man who batters a woman is foolish and a coward," Museveni told his audience in the town of Mityana, according to local media.

The president also called on lawmakers to enable women's economic independence, asking for more funds appropriated for education — which in turn, he argued, will be critical for Uganda's success, as well.

NPR's Eyder Peralta reports that on Thursday, men in Uganda were expected to do all the cleaning and cooking for women. And law enforcement opened the month by rolling out all-female traffic crews to increase the visibility of their women in uniform.

"We want to show that we can do better," Claire Ansasire, a traffic police officer, told a Ugandan broadcaster earlier this month. "We are police officers, we are wives, we are mothers — we can do it all." 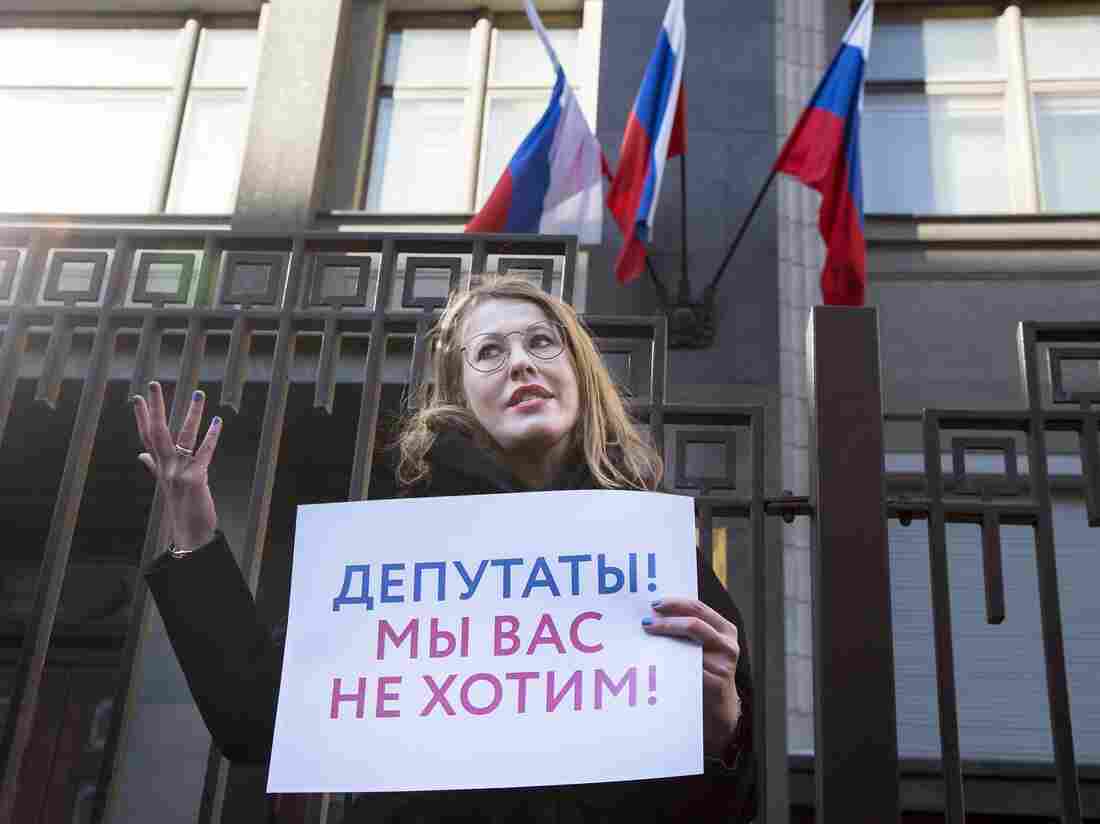 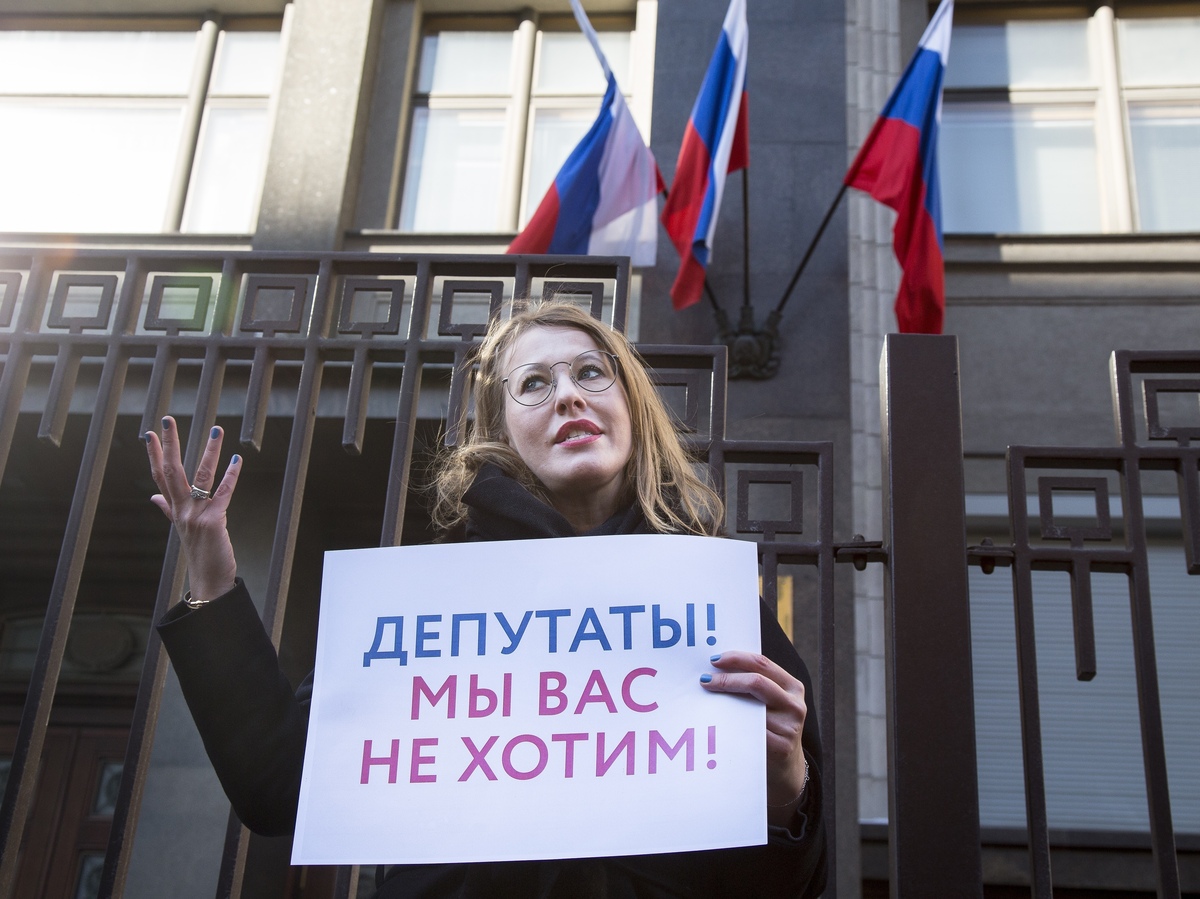 International Women's Day is a national holiday in Russia, where people are embarking on their four-day weekends as a result. Yet The Associated Press reports that demonstrations in the country, where there have been any, have been sparsely attended.

Russian President Vladimir Putin did, however, offer a statement to the "women of Russia" marking the date.

"All this is for you, ladies," he said. "We are happy to have such a wonderful occasion to express again our deep respect for you, our enchantment with your beauty and tenderness."

He also described women as responsible mothers and warm colleagues, able to "create a welcoming atmosphere at work and at home, take care of our homes and children every day and be a moral example to them."

"Woman is the kind and serene figure in every man's life," he said. "Countless works of art are dedicated to women."

Then he recited a poem. 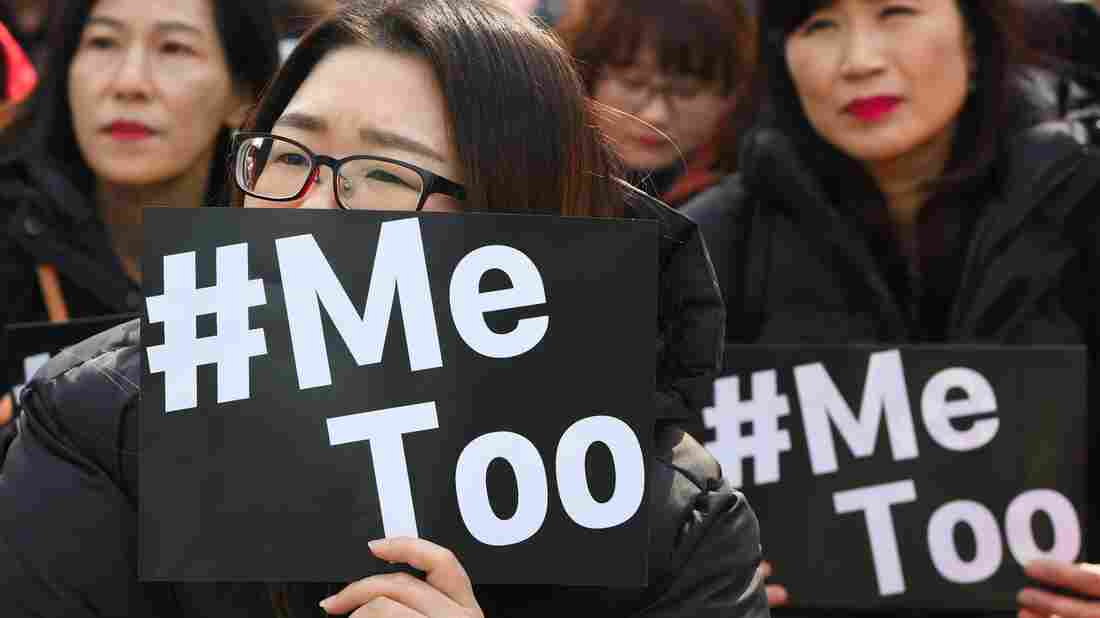 South Korean demonstrators rally in Seoul on Thursday for the #MeToo movement, which has gradually gained ground in in the socially conservative country. Jung Yeon-je/AFP/Getty Images hide caption 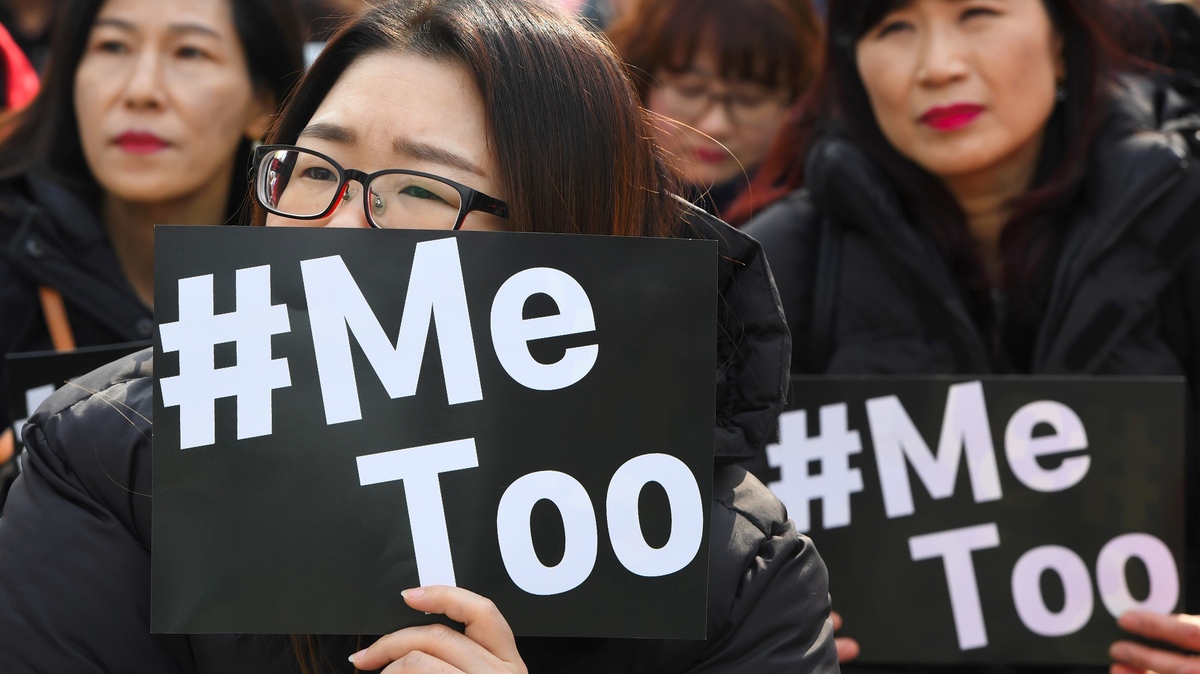 South Korean demonstrators rally in Seoul on Thursday for the #MeToo movement, which has gradually gained ground in in the socially conservative country.

The #MeToo movement has blossomed in the traditionally socially conservative country since January, as claims of sexual assault and harassment have begun to gain footholds in the national conversation. This week alone, a rising star in the ruling party apologized and announced his resignation after one of his secretaries went public with allegations that he raped her several times in the past year.

"We all had a big shock, and there's a higher consciousness now that women cannot experience such terrible things anymore," Chung Hyun-back, the country's minister of gender equality and family, reportedly told a news conference Thursday.

"The #MeToo movement is an event where boiling rage has finally erupted against gender-biased power relations and gender inequality, which have been a long, deep-rooted evil of our society."

That same day, protesters with the Korean Confederation of Trade Unions took to the streets in Seoul bearing black signs with #MeToo lettered in stark white. And indoors, at the National Assembly, an event commemorating International Women's Day drew attendees from 110 South Korean women's rights groups, according to the country's Yonhap news service.

"We will join the Me Too movement until the end to eradicate all types of sexual violence that infringe upon women's rights," the event's host, the Korean National Council of Women, said in a statement.