Accessibility links
U.S. Signs Off On Tariffs, Angering Trade Partners : The Two-Way The administration's plan to impose a 25 percent tariff on steel imports and 10 percent on aluminum has been met by near universal criticism from around the globe. 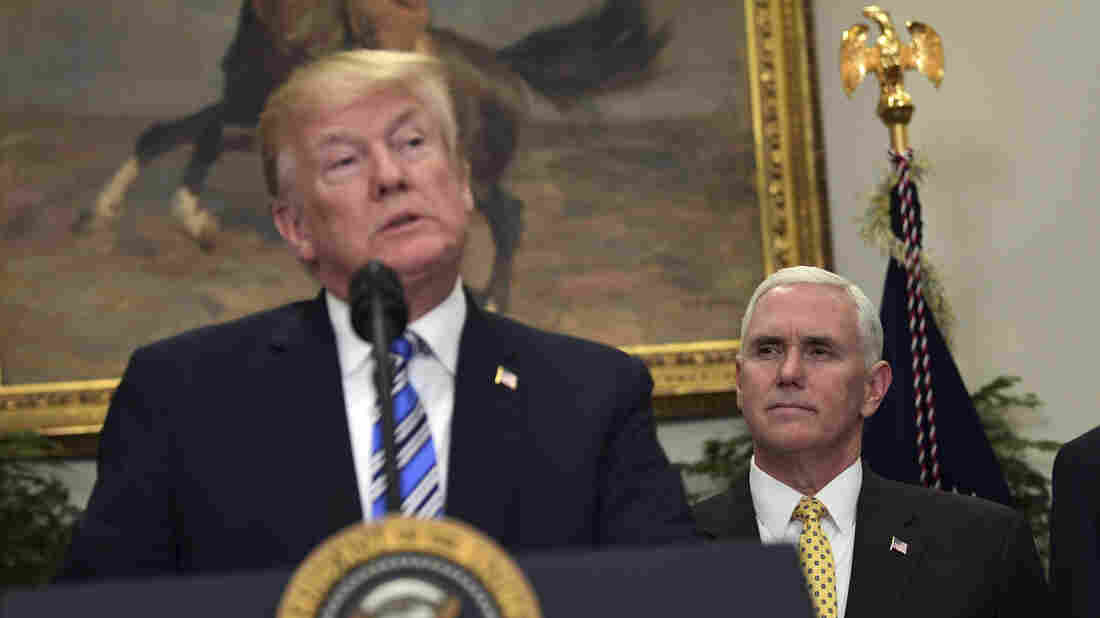 Vice President Pence listens as President Trump speaks at the Thursday event at which Trump signed the orders on steel imports and the other on aluminum imports. Susan Walsh/AP hide caption 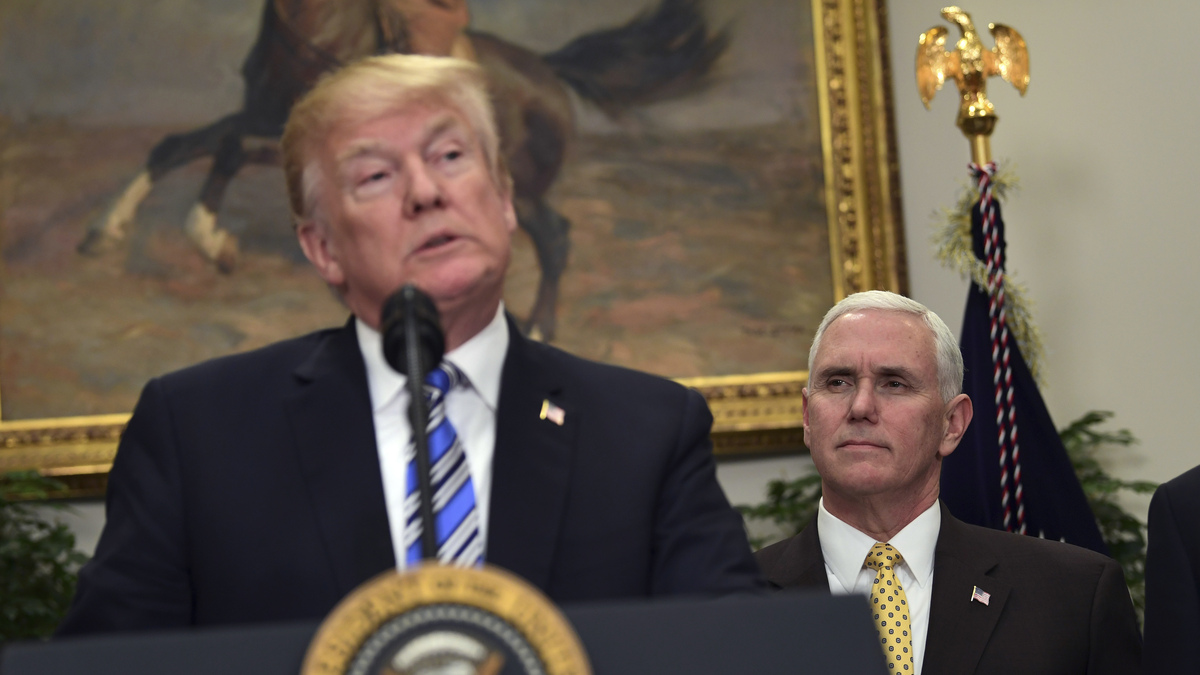 Vice President Pence listens as President Trump speaks at the Thursday event at which Trump signed the orders on steel imports and the other on aluminum imports.

Newly enacted U.S. tariffs on aluminum and steel imports have sparked a sharp reaction from around the globe, with several nations warning of an all-out trade war.

The administration clarified this week that Canada, the largest single source of imported steel (about 16 percent), would be exempt, as would Mexico (about 9 percent). Along with the U.S., the two nations make up the North American Free Trade Agreement, which is largely aimed at stemming such punitive tariffs.

The move, which fulfills a Trump campaign promise, has been widely criticized by economists who say it is certain to increase costs to U.S. consumers on items such as automobiles, household appliances and even energy, because of higher costs for pipeline construction.

It could also significantly increase the cost of road and bridge construction and hobble the administration's plans for an infrastructure initiative.

China has been singled out as a prime target of the new policy, and Beijing has said it "firmly opposes" the tariffs and has in the past threatened retaliation.

However, as NPR's Anthony Kuhn notes, "Despite China's objections, the tariffs are not likely to do it much damage, since less than 2 percent of China's steel exports go to the U.S."

Japanese Foreign Minister Taro Kono said the tariffs "could make a significant impact on the economic and cooperative relationship between Japan and the U.S., who are allies."

Brazil, the second-largest exporter of steel to the U.S., is also the largest importer of U.S. metallurgical-grade coal to fuel the steelmaking furnaces.

NPR's Philip Reeve tells Morning Edition that Brazil is gravely concerned about the U.S. tariffs, saying that they will hurt trade relations and that the South American country has not ruled out sourcing its coal from elsewhere.

Brazil has not indicated where else it might get coal. China is the world's largest producer of "met coal," but it consumes it all and buys more from abroad, including from the U.S. Australia is also a major exporter of metallurgical coal.

While Trump has been a big backer of the U.S. coal industry, it is possible that his new tariffs could backfire, hurting U.S. coal exports while boosting those from China.

Meanwhile, the European Union said that it hoped, like Canada and Mexico, to be exempted from U.S. tariffs or that it could iron out differences with the U.S. at the World Trade Organization.

"We are friends, we are allies, we work together," EU Trade Commissioner Cecilia Malmström said. "We cannot possibly be a security threat to the United States so we are counting on being excluded."

Malmstroem hinted that retaliation was still an option if everything else failed: "We will have to protect our industry with rebalancing measures."

Both Germany and France backed the EU position, with German government spokesman Georg Streiter telling reporters in Berlin that "the exact nature of the (EU) steps will be decided after a close analysis of the American measures," according to Reuters. French Economy and Finance Minister Bruno Le Maire promised a "strong and unified" response from the EU.

Finally, Britain Trade Secretary Liam Fox said Trump's approach to tariffs is doubly absurd because they would apply to British suppliers to the U.S. military. He called tariffs the "wrong way" to tackle the problem of cheap steel and aluminum being dumped on the U.S.