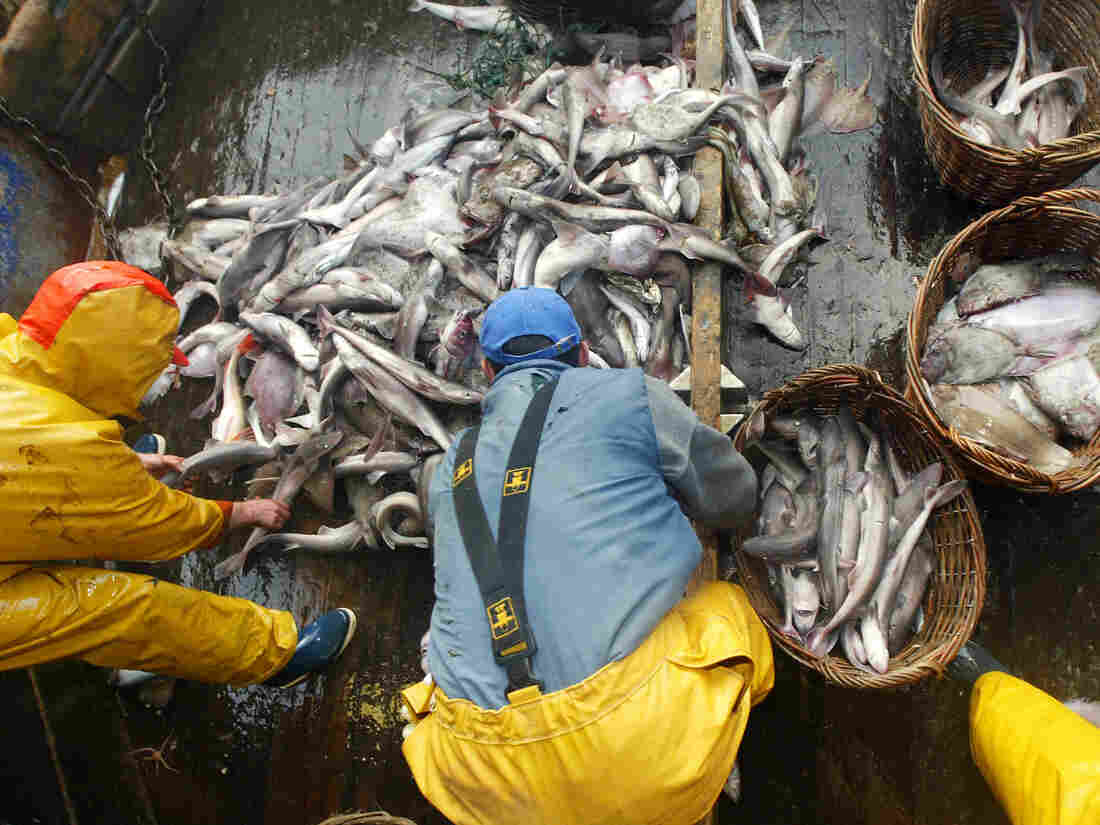 A fisherman loads a catch into baskets at sea aboard a Spanish boat. Two vessels flying the Spanish flag were signaled out for "going dark" in a new report issued by the conservation group Oceana. Marcel Mochet/AFP/Getty Images hide caption 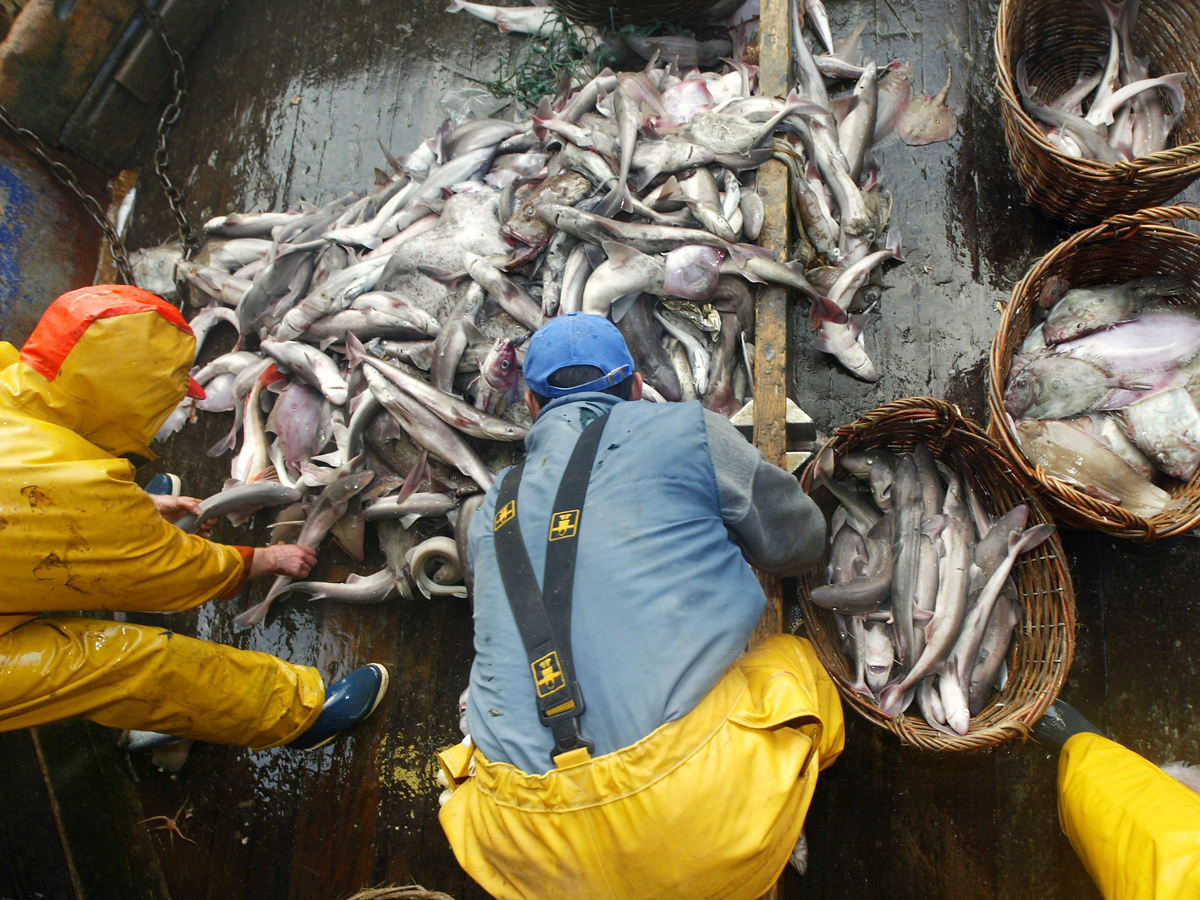 A fisherman loads a catch into baskets at sea aboard a Spanish boat. Two vessels flying the Spanish flag were signaled out for "going dark" in a new report issued by the conservation group Oceana.

A new report raises concerns that when fishing vessels "go dark" by switching off electronic tracking devices, in many cases they are doing so to mask the taking of illegal catches in protected marine parks and restricted national waters.

In the report released Monday by Oceana, an international conservation group, authors Lacey Malarky and Beth Lowell document incidents of fishing vessels that disappear from computer screens as they shut off collision-avoidance beacons near restricted areas, only to have them reappear days or weeks later back in legal fishing grounds.

"This practice of vessels going dark is really widespread on a global scale," Malarky tells NPR.

Malarky and Lowell used Global Fishing Watch, which aggregates automatic identification system, or AIS, signals to give an unprecedented view of global fishing activity. AIS signals can be viewed by the public through such websites as Vesselfinder.com.

AIS has been around for about 20 years and is designed to give valuable information about a vessel — including its type and size, location, course and speed — to other vessels to help avoid collisions at sea. The International Maritime Organization requires all commercial vessels in international waters larger than 65 feet to have the system aboard.

Even so, when it comes to transmitting AIS, there are exceptions. Among them, AIS can be switched off at a captain's discretion for security reasons, such as when transiting an area where piracy is a concern. Loopholes such as these, Oceana says, can be exploited by unscrupulous fishing vessels to move in and out of no-take areas undetected.

Sifting through millions of incidents of vessels "going dark" — many presumably for legitimate reasons — the report details four cases that the authors believe are particularly suspicious:

-- The Panamanian-flagged Tiuna, a 223-foot purse seiner that failed to transmit an AIS signal for 15 days while operating near the Galapagos Marine Reserve — one of the largest and most diverse such protected areas in the world. 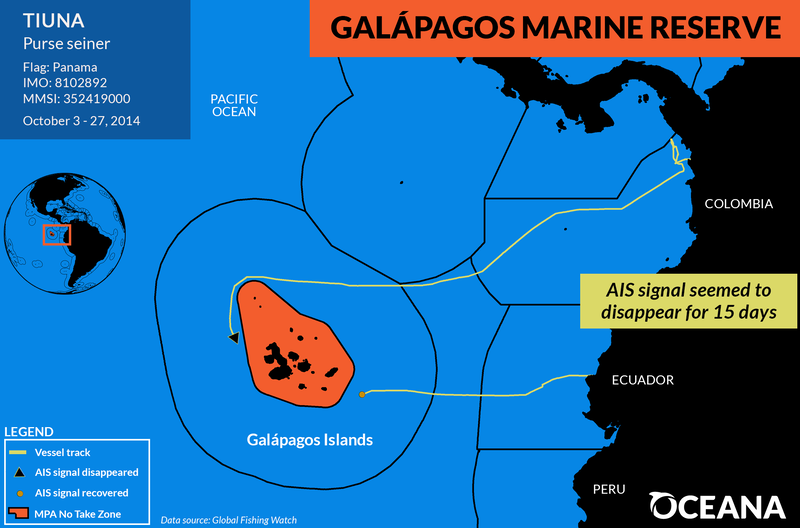 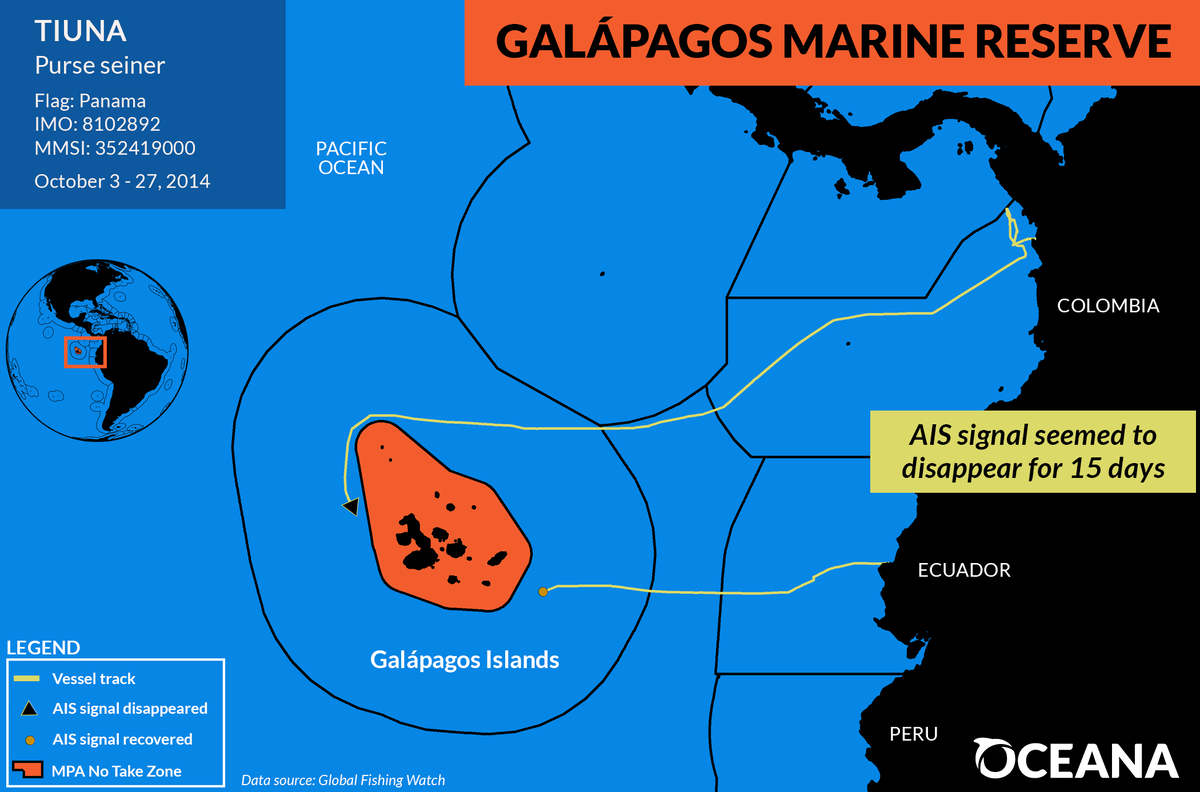 -- A 177-foot Australian longliner, Corinthian Bay, that disappeared from AIS repeatedly over a 15-month period as it operated the Heard Island and McDonald Islands Marine Reserve. 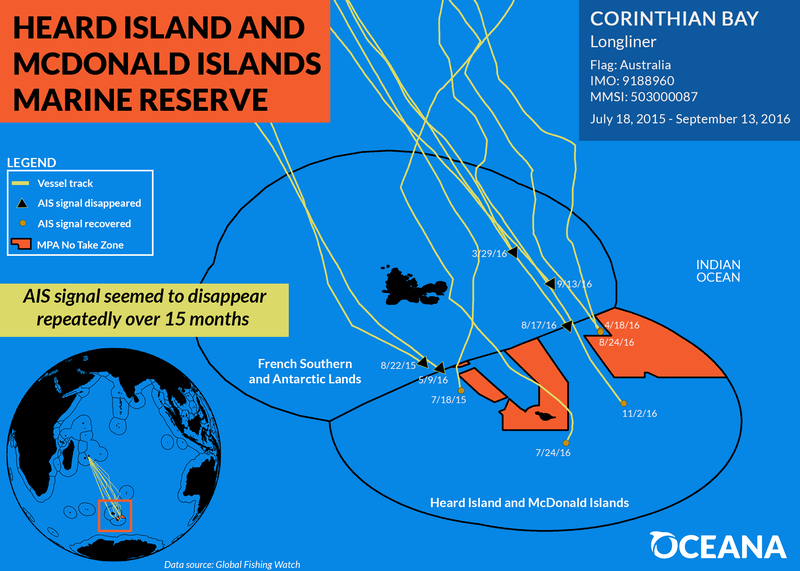 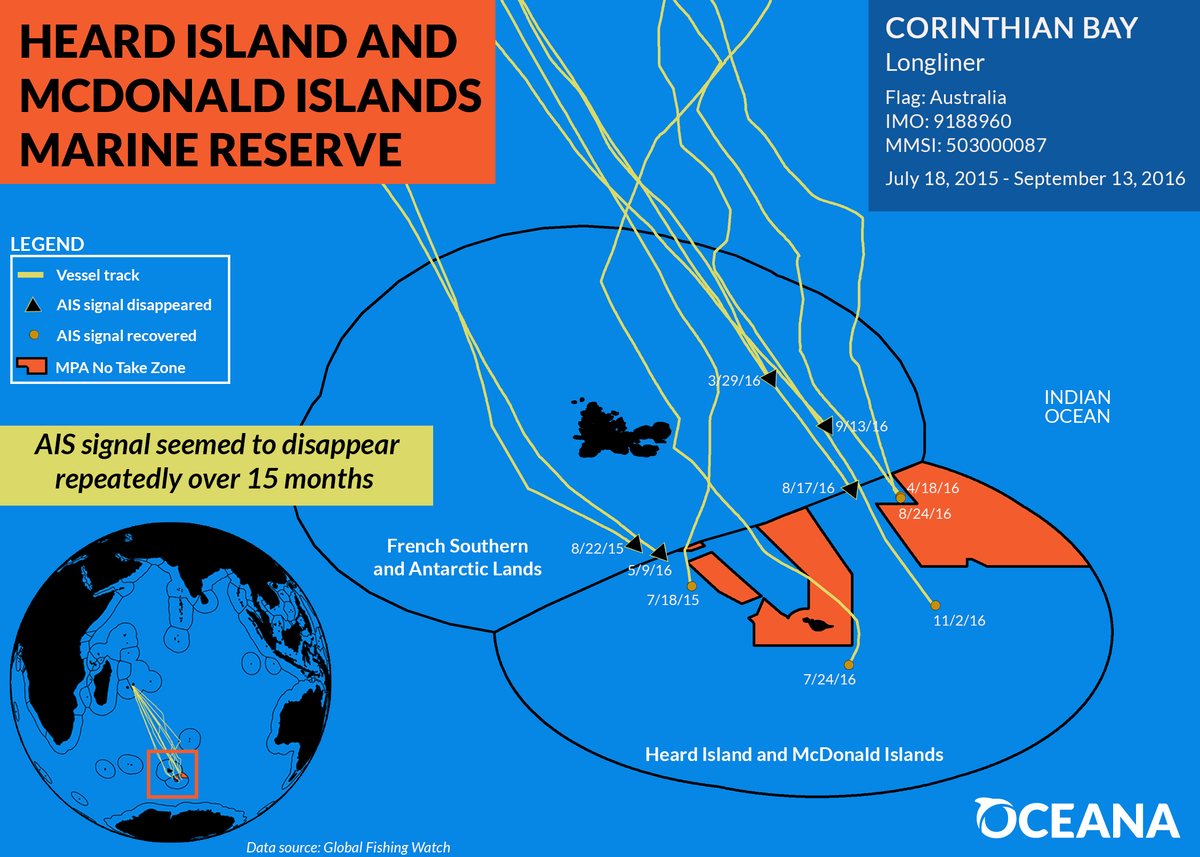 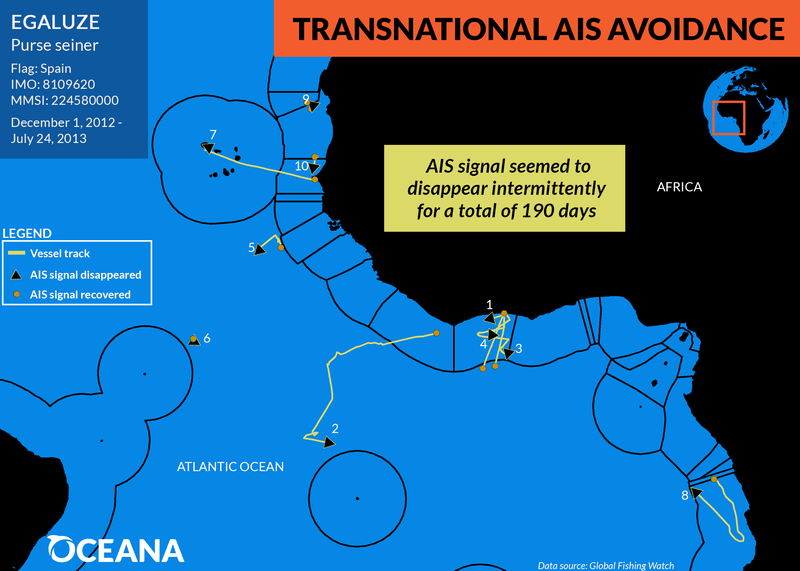 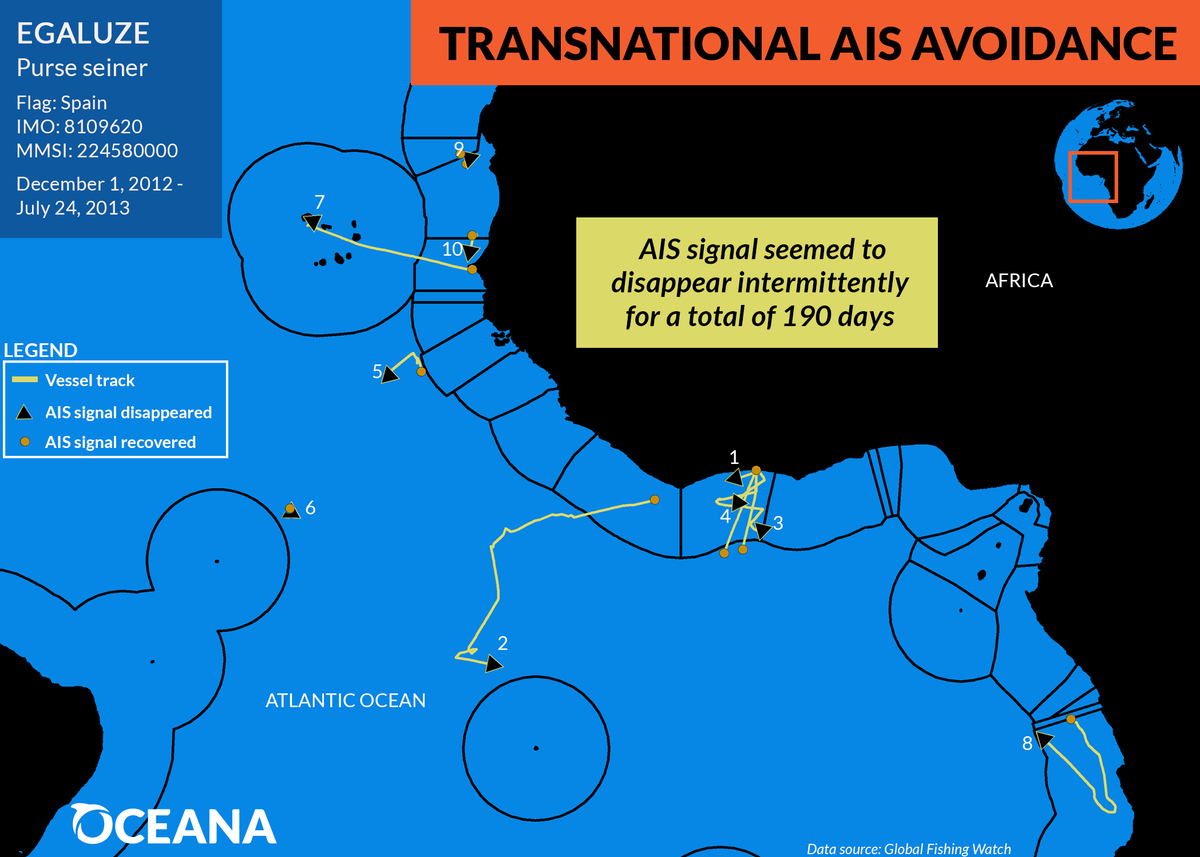 -- The Spanish-flagged Releixo, a 120-foot trawler, whose AIS signal disappeared repeatedly over a six-month period near the maritime border of Senegal and Gambia. 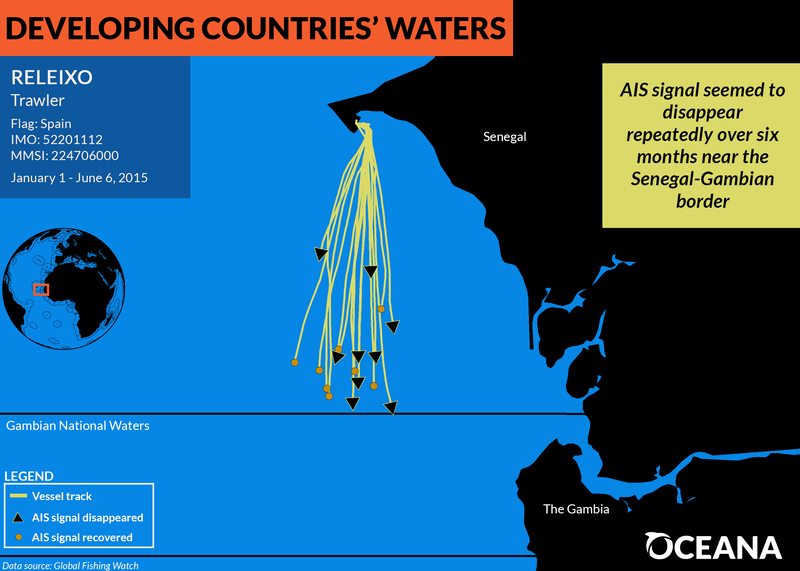 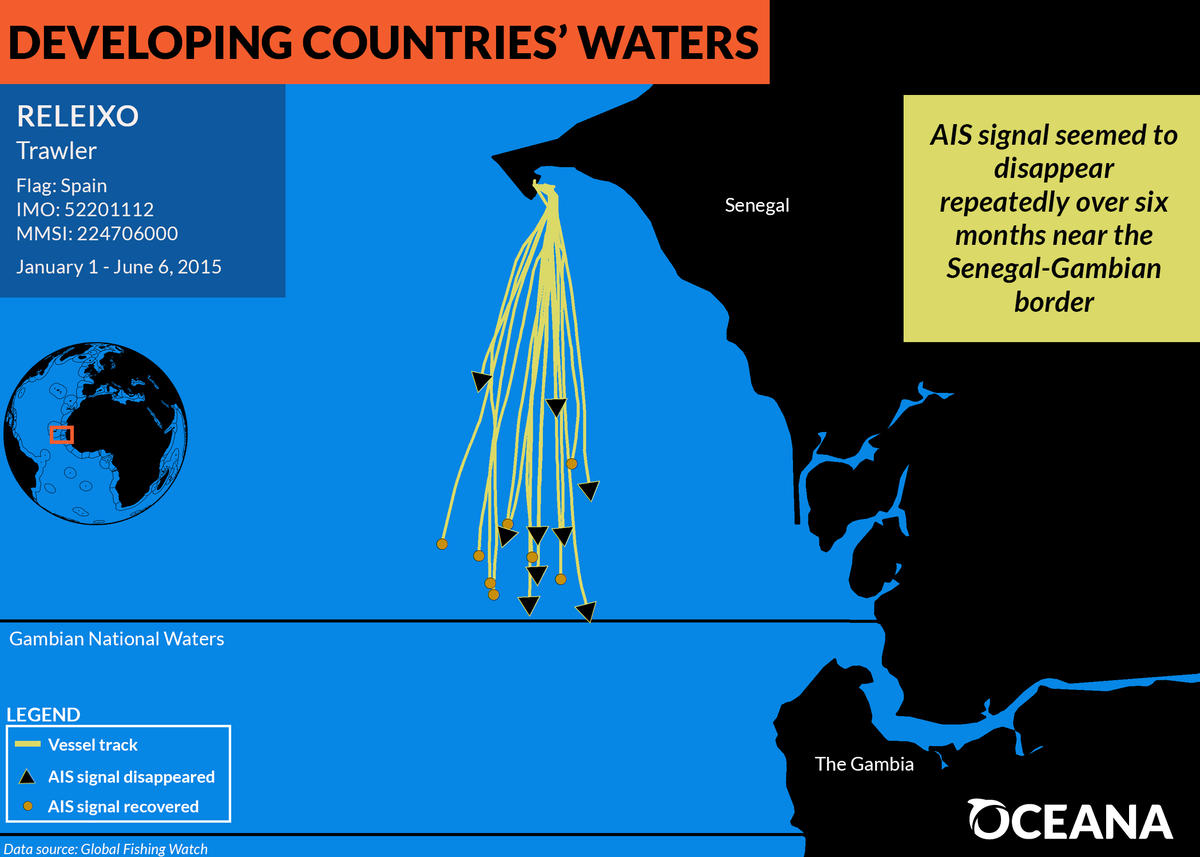 The European Commission and the Spanish government have opened investigations into the cases spotlighted by Oceana, Malarky tells NPR. "It's an unprecedented step for the EU in terms of AIS non-compliance."

"What they are going to do is cross-check" the blanks in the AIS picture against VMS "to see if maybe they were fishing where they weren't supposed to be."

She says these individual incidents only serve to draw attention to what Oceana believes is a much larger problem.

"We really wanted to highlight these cases of vessels in suspicious areas where they are turning off their AIS, like no-take marine protected areas where commercial fishing is prohibited [and in] developing countries' waters, where [those countries] may not have effective monitoring and control policies in place," she says.

The report's authors recommend that governments require vessels flying their flag to notify authorities when they turn off AIS, giving the reason.

Right now, Malarky says, "there's no public accountability" for suspicious behavior and that by requiring vessels to explain why they may have turned off AIS, authorities would be able to better monitor what is going on.

"When we find these instances in suspicious locations, we need to be able to cross-check and say, 'this vessel was concerned about this' and not doing anything illegal," she says.