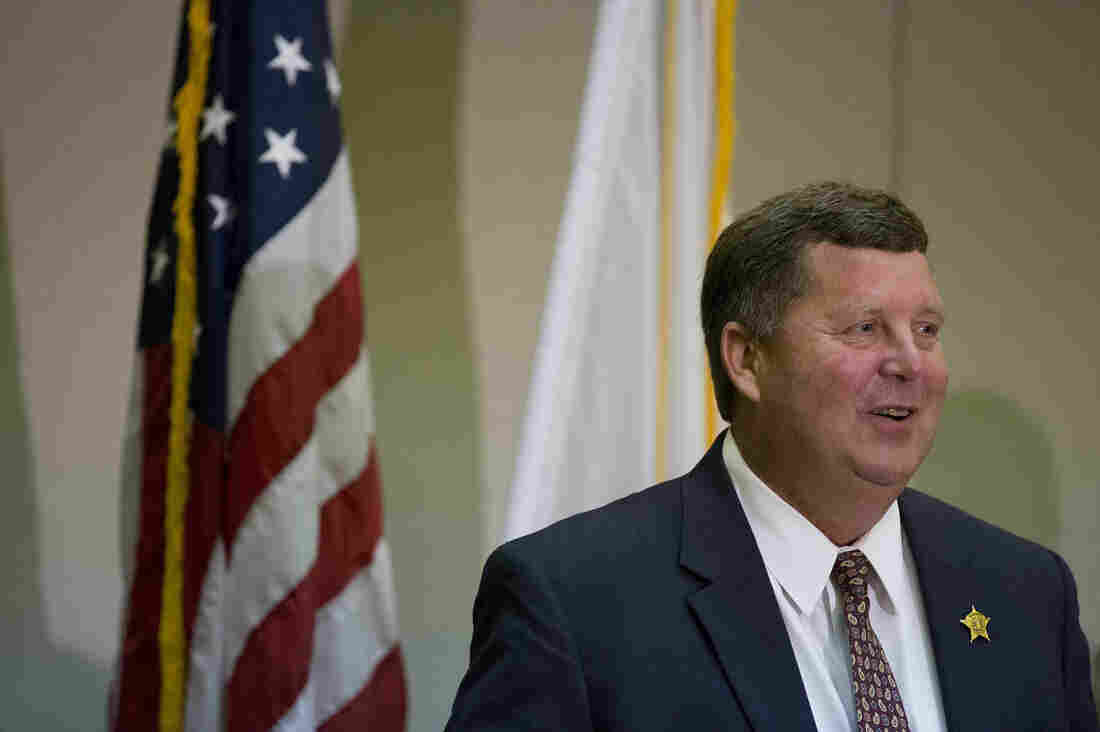 Etowah County Sheriff Todd Entrekin took home as personal profit more than $750,000 that was budgeted to feed jail inmates, which is legal in Alabama, according to state law and local officials. Brynn Anderson/AP hide caption 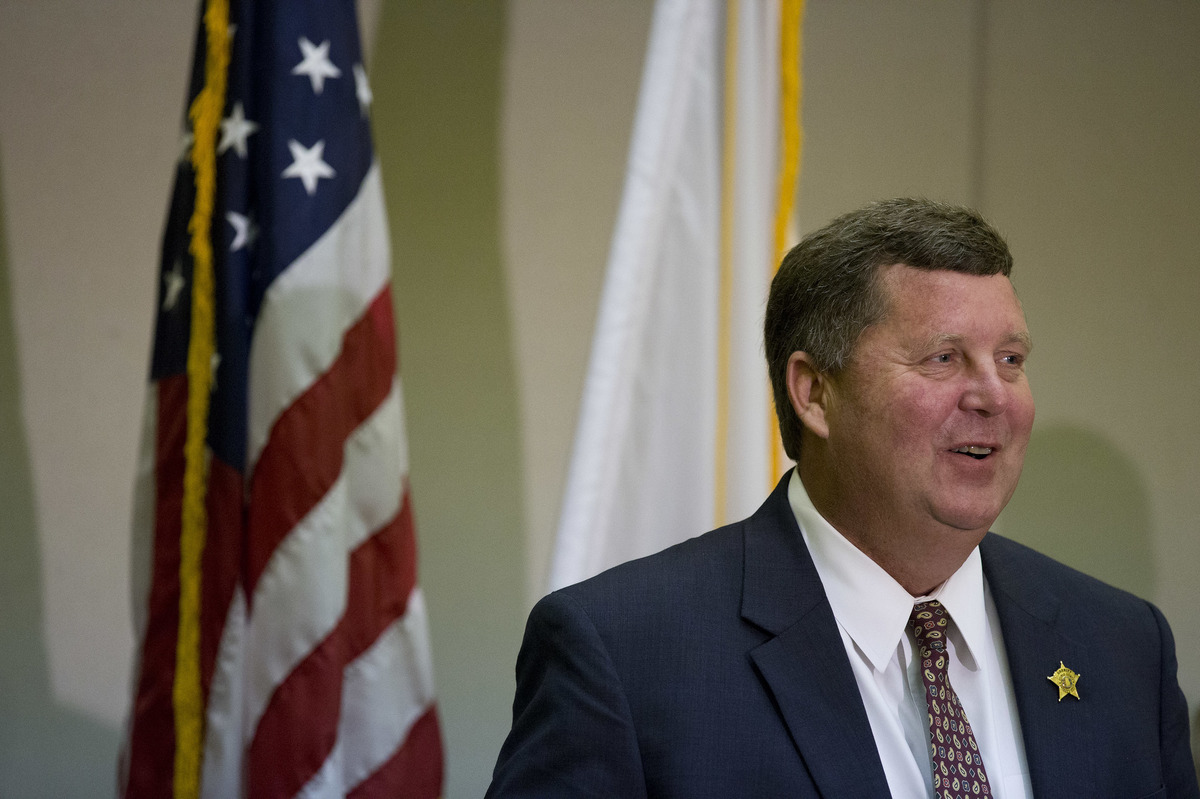 Etowah County Sheriff Todd Entrekin took home as personal profit more than $750,000 that was budgeted to feed jail inmates, which is legal in Alabama, according to state law and local officials.

A sheriff in Alabama took home as personal profit more than $750,000 that was budgeted to feed jail inmates — and then purchased a $740,000 beach house, a reporter at The Birmingham News found.

And it's perfectly legal in Alabama, according to state law and local officials.

Alabama has a Depression-era law that allows sheriffs to "keep and retain" unspent money from jail food-provision accounts. Sheriffs across the state take excess money as personal income — and, in the event of a shortfall, are personally liable for covering the gap.

Etowah County Sheriff Todd Entrekin told the News that he follows that practice of taking extra money from the fund, saying, "The law says it's a personal account and that's the way I've always done it."

But in Etowah County, the News found the paper trail.

'Following the letter of the law'

The News discovered the eye-popping figures on ethics disclosures that Entrekin sent to the state: Over the course of three years, he received more than $750,000 in extra compensation from "Food Provisions." The exact amount over $750,000 is unclear, because Entrekin was not required to specify above a $250,000 a year threshold, the paper writes.

The paper also found that Entrekin and his wife own several properties worth a combined $1.7 million, including a $740,000 four-bedroom house in Orange Beach, Ala., purchased in September.

Without the provision funds, Entrekin earns a little more than $93,000 a year, the paper says.

In a statement emailed to NPR, Entrekin said the "liberal media has began attacking me for following the letter of the law."

2009: Ala. Sheriff Jailed For Starving Inmates

Ala. Sherriff Jailed For Starving Inmates

"The Food Bill is a controversial issue that's used every election cycle to attack the Sheriff's Office," Entrekin said. "Alabama Law is clear regarding my personal financial responsibilities of feeding inmates. Until the legislature acts otherwise, the Sheriff must follow the current law."

Before he made headlines for profiting off the law, Entrekin was better known for being indebted by it.

When Entrekin's predecessor died while still in office, all the money in the food provision account went to his estate — as state law dictated, a county official told NPR. Entrekin had to borrow $150,000 to keep the inmates fed. He was paying down that debt for years, The Gadsden Times reported.

In 2009, while he was still in debt from paying for inmates' food, Entrekin told the Times that he personally thought the law needed to be changed. But he noted that it might cost more money for taxpayers if the county commission had to manage jail kitchens through an open bid process.

David Akins, the chief administrative officer of the Etowah County Commission, agrees with that assessment. He says the commission is not eager to take on that duty, as some other local governments have done.

"The sheriff can feed inmates cheaper than the county can," he said.

Alabama's controversial system hearkens back to a different era, when county jails were more of a mom and pop operation and feeding inmates was often the responsibility of a sheriff's wife.

Today in Alabama, sheriffs are personally responsible for feeding inmates in their jails and receive funds to cover the cost. For state inmates, it's less than $2 per inmate per day; for county, city or federal inmates, the amount can be higher.

If sheriffs feed inmates on less than that, they can "keep and retain" whatever is left over.

Lawyer Aaron Littman, at the Southern Center for Human Rights, said in a January statement that the practice of pocketing leftover funds was a "dubious interpretation" of the law that "raises grave ethical concerns, invites public corruption, and creates a perverse incentive to spend as little as possible on feeding people who are in jail." He argues the sheriffs are supposed to manage the funds, not personally profit from them.

But local governments across the state say the law is clear that the money can be kept for personal use.

"That's the way it was set up years ago," Akins from the Etowah County Commission tells NPR. "That's just the way it's been in the state. ... Of course, state legislators could always change that if they wanted to."

He doesn't see a problem with the practice.

"I think if the inmates were not being fed properly, it might be a concern," he said. "But I'll guarantee you that if they're not fed properly, the federal government would let us know about it."

In some cases, the federal government has objected.

In 2009, then-Sheriff Greg Bartlett of Morgan County was briefly tossed in jail after acknowledging that he had personally profited, to the tune of $212,000, from a surplus in the jail-food account. Prisoners testified about receiving meager meals.

To cut corners, Bartlett used charitable donations and "special deals," as CBS put it — including once splitting a $1,000 truck full of corn dogs with a sheriff of a nearby county and then feeding the inmates corn dogs twice a day for weeks.

He defended himself by noting that his profit was legal under state law, but an exasperated federal judge said the sheriff had an obligation to feed his inmates adequate food.

The story made national headlines, and Bartlett agreed to no longer dip into the jail food fund.

In 2015, a sheriff in Morgan County loaned $150,000 from the inmate food fund to a corrupt car lot. The loan was revealed when the business, facing theft and scam charges, went bankrupt.

Again, that sheriff's use of the food money was legal under state law; it was only prohibited in Morgan County because of the county's particular history.

Aside from individual lawsuits like those, it's hard to tell exactly how much money earmarked for inmate food is going to sheriffs.

This January, two advocacy groups sued for access to records that could reveal how much jail food money was being turned into personal profit. The groups said 49 sheriffs had refused to provide records of where funds were spent.

Then in February, reporter Connor Sheets of the News began revealing Entrekin's spending history and his ethics disclosures.

'I put two and two together'

Sheets' investigation has also made headlines because of the arrest of a key source.

Sheets spoke with a landscaper named Matt Qualls who mowed Entrekin's lawn in 2015 and noticed the name of the account on his checks — the "Sheriff Todd Entrekin Food Provision Account." He shared pictures with Sheets.

"A couple people I knew came through the jail, and they say they got meat maybe once a month, and every other day, it was just beans and vegetables," Qualls told Sheets. "I put two and two together and realized that that money could have gone toward some meat or something."

Sheets' initial story was published on Feb. 18. On Feb. 22, Qualls was arrested and charged with drug trafficking after an anonymous call complained of the smell of marijuana from an apartment.

Qualls, who had never been arrested before, faces six charges and is being held on a $55,000 bond, Sheets reports. He is detained in a jail that Entrekin oversees.

Qualls was arrested by Rainbow City Police, not by the sheriff's department.

The Etowah County Drug Enforcement Unit added extra charges to his case, including a charge of drug trafficking, which the Rainbow City Police chief said was based on inaccurate weight calculations. (The unit counted 14 grams of pot, infused in five cups of butter, as more than than 1,000 grams worth of marijuana.)

"Penalties for drug trafficking are extremely steep in Alabama, where people have been imprisoned for life for the crime," Sheets notes.

A previous version of this story stated sheriffs do not need to report extra income of less than $250,000 a year. That is inaccurate. There is a $250,000 cap on mandatory reporting from a single source.