Accessibility links
Orlando Gunman's Widow On Trial: 'No One Knew. Except Two People' : The Two-Way Prosecutors say Noor Salman assisted the 2016 rampage at Pulse nightclub and misled police. Her attorneys, however, say she was a "simple woman" who was abused by him and coerced by law enforcement. 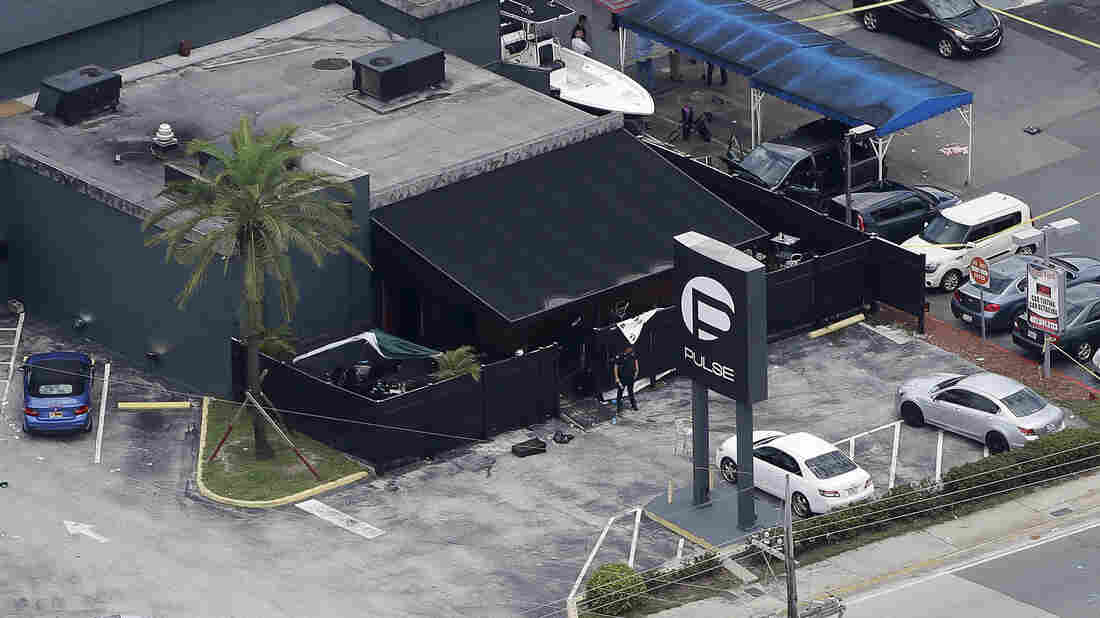 An overhead view of Pulse nightclub in Orlando, Fla., where Omar Mateen killed 49 people and injured dozens more in June 2016. On Wednesday, attorneys delivered opening statements in the trial of his widow, Noor Salman, the only person charged in the attack. Her husband died at the scene. Chris O'Meara/AP hide caption 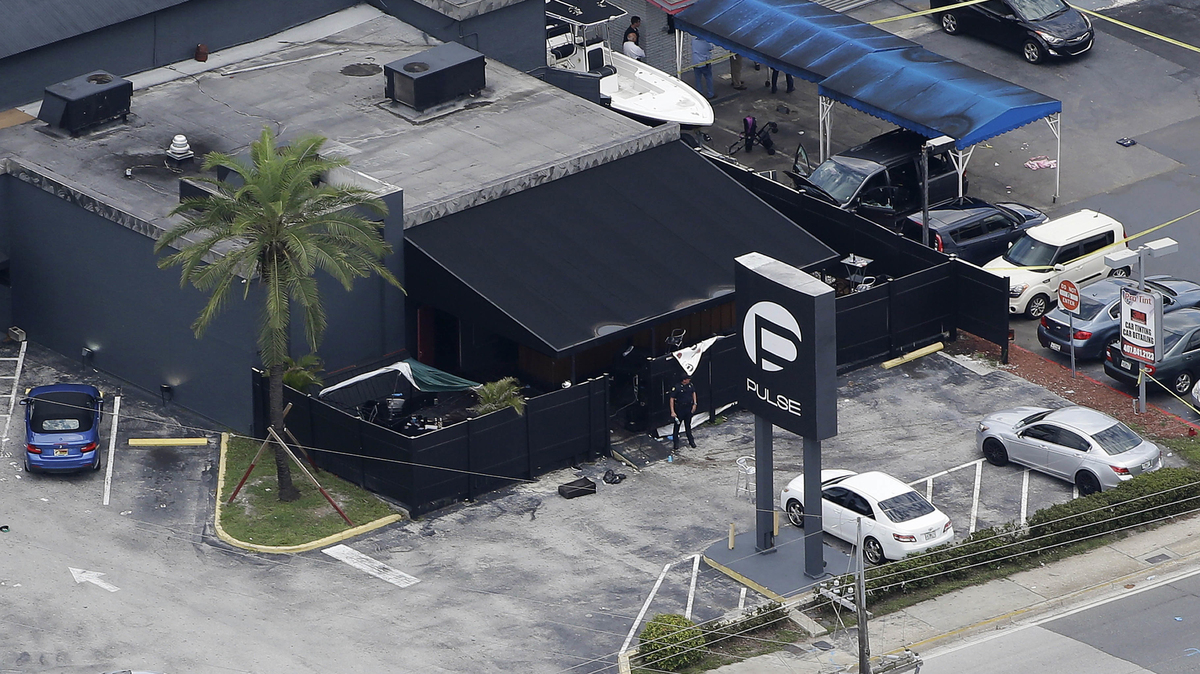 An overhead view of Pulse nightclub in Orlando, Fla., where Omar Mateen killed 49 people and injured dozens more in June 2016. On Wednesday, attorneys delivered opening statements in the trial of his widow, Noor Salman, the only person charged in the attack. Her husband died at the scene.

More than a year and a half after Omar Mateen opened fire at an Orlando nightclub, leaving 49 victims dead and ultimately dying himself in a shootout with police, attorneys delivered their opening statements on the sole person charged in the massacre: Mateen's widow, Noor Salman.

"No one knew the horrific events that were going to unfold," Assistant U.S. Attorney James Mandolfo told the jury Wednesday, according to multiple media outlets reporting from inside the courtroom. "No one knew. Except two people."

Authorities have charged Salman with aiding and abetting her husband, who pledged allegiance to the Islamic State militant group the night of the shooting, and with obstructing the efforts of federal local and federal investigators. If convicted and given the maximum sentence, Salman would spend the rest of her life in prison.

3 Hours In Orlando: Piecing Together An Attack And Its Aftermath

Prosecutors say she was well aware of Mateen's intentions ahead of time, joining a spending spree before his rampage and casing potential targets, including Disney Springs. "What would make people more upset," Mandolfo said Mateen once asked her, "an attack at a club or at Disney?"

"The defendant's cold actions gave Omar Mateen a green light to commit these crimes on behalf of ISIS," Mandolfo added, according to the Orlando Sentinel.

Defense attorney Linda Moreno, for her part, described Salman as a "simple woman," easily influenced and often abused by her cheating husband. Moreno asserted that Salman believed she and her husband were planning a better future for their young child, not an attack.

"It's natural to assign blame," Moreno said in her opening statement, according to WMFE's Brendan Byrne, "but the law does not punish failure to act."

As for the conflicting statements Salman made to authorities — which prosecutors say confirm her foreknowledge of Mateen's attack and intent to mislead investigators after it — Moreno asserted those responses were given under duress. The FBI did not record its interrogation of Salman, the lawyer noted, arguing that they coerced Salman into saying what agents wanted to hear — and saying things that were in many cases "provably false," Moreno said.

"Omar Mateen is a monster," she said in court, as CNN reports. "Noor Salman is a mother, not a monster. Her only sin is she married a monster."

The trial is unfolding in a federal courtroom just two miles from Pulse, the gay club where Salman's husband conducted the massacre.

And wounds remain fresh in the area. The court needed more than a week — and scores of rejected juror possibilities — to finally settle on the jury for the trial.

"You really want to address the tremendous tragedy and injustice that was visited upon Orlando's people by this crime," national security expert Karen Greenberg told WMFE's Amy Green earlier this month as jury selection got underway, adding that jurors must be able to distinguish between Salman's actions and those of her husband.

"To have somebody in custody who is a proxy defendant is something you definitely want to avoid."

Other onlookers, such as the only demonstrator who set up outside the court Wednesday, appear to have already made up their minds: "Fry her till she has no 'Pulse,' " read one of his two signs.

Meanwhile, strong emotions were evident inside the courtroom, as well — though in at least one case, that emotion appeared to be less anger than pain.

The prosecution's first witness Wednesday, Orlando Police Officer Adam Gruler, "became choked up several times during testimony, reports a producer with ABC's local affiliate. Gruler had been off duty and working security outside the club when gunshots rang out around 2 a.m., and he knew from the sound of Mateen's assault-style rifle that he was outgunned.

He said he waited until other officers arrived soon after the gunfire started, then they entered the building together. At that point, he said, "time froze."

"There was no concept of any time for me," Gruler told the court, according to the Sentinel. And the carnage was immediately clear. "No matter where we stepped, there was blood."

Gruler is just the first of many witnesses still to testify in the coming weeks. The trial is expected to last a little less than a month.