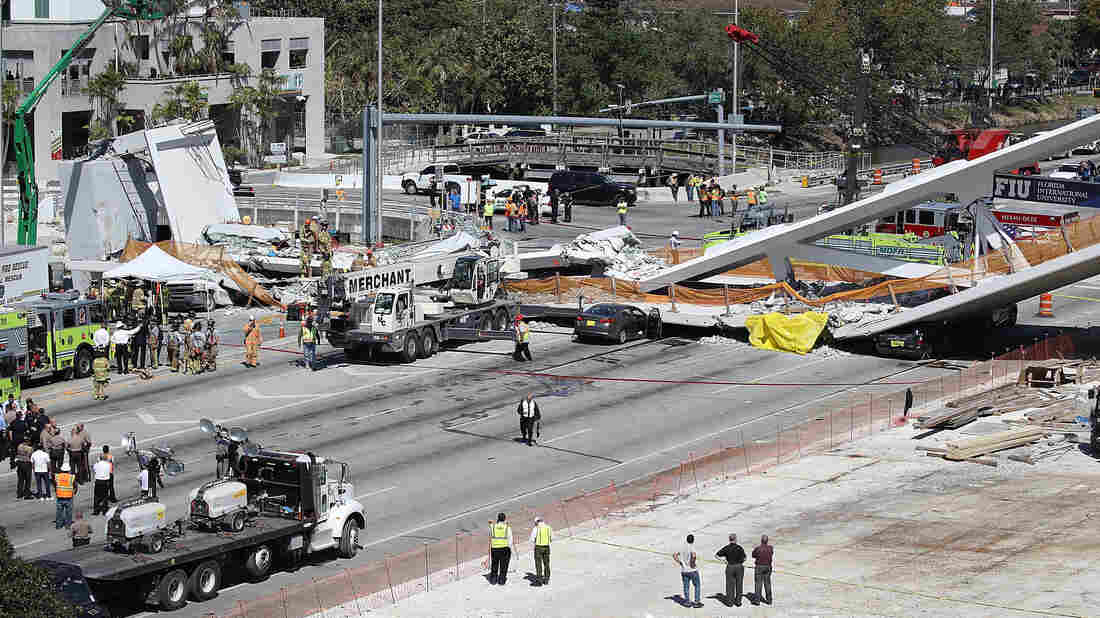 The Miami-Dade Fire Rescue Department and other personnel work at the scene where a pedestrian bridge collapsed a few days after it was built over Southwest 8th Street. Joe Raedle/Getty Images hide caption 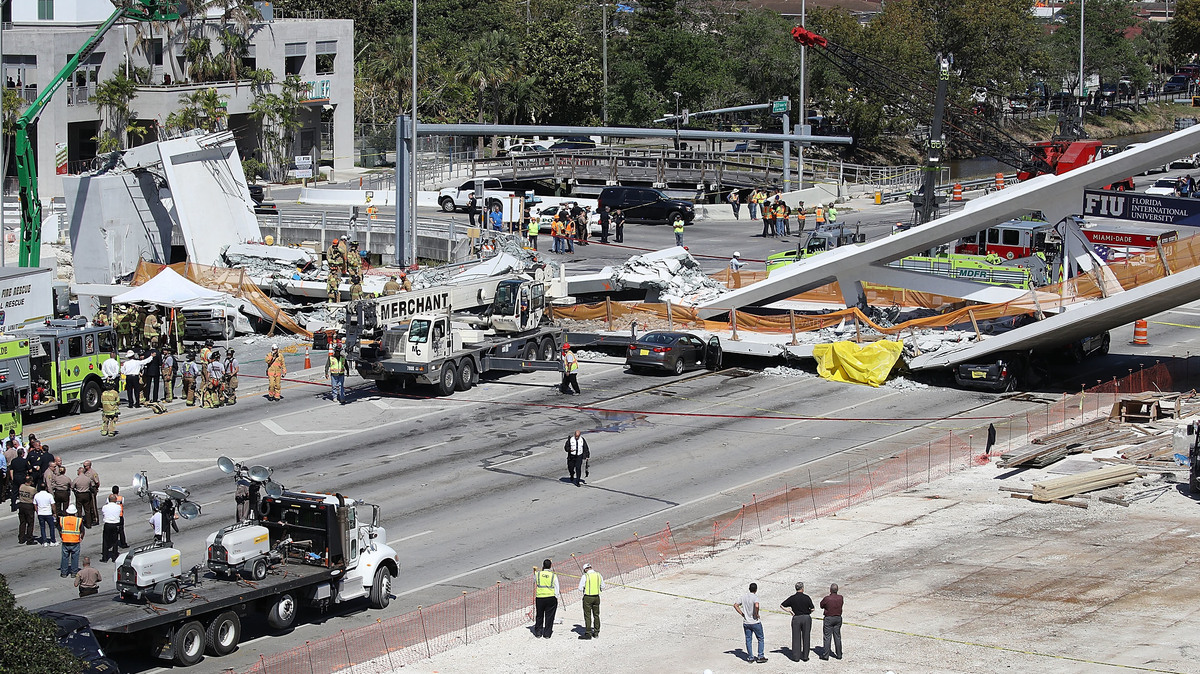 The Miami-Dade Fire Rescue Department and other personnel work at the scene where a pedestrian bridge collapsed a few days after it was built over Southwest 8th Street.

Updated at 8 a.m. ET on Friday

The number of people who died after a newly placed pedestrian bridge collapsed at Florida International University has risen to six, as crews work to clear debris and wreckage from the scene in Miami-Dade County.

In addition to the six people who were found dead at the site, 10 others were transported to area hospitals, Miami-Dade Police said in an update on the accident Friday morning.

Weighing some 950 tons, the pedestrian bridge was still under construction along the edge of Florida International University's campus when it collapsed Thursday afternoon on a major roadway, trapping motorists and passengers underneath.

Initially, authorities said four bodies had been recovered, but later, Miami Dade Police spokesman Alvaro Zabaleta said the remains of two more people had been removed from the debris.

"They're still working away at that concrete," Zabaleta said at a news conference early Friday.

"Engineers told us last night that it has to be done very carefully. Not only because we have to preserve evidence, not only because there might be possible victims under there and we have to treat it very delicately. But because of the safety of the rescuers," he said.

Video footage showed the bridge collapsed onto a multilane highway, crushing vehicles underneath, and several people being loaded into ambulances.

Officials asked the public to avoid the area "indefinitely" and directed people worried about loved ones to get in touch with the family reunification center on FIU's campus.

In a news conference late Thursday evening, FIU President Mark Rosenberg recalled that his university's community had just celebrated over the weekend a milestone in the erection of the bridge, a project which was originally begun in 2010.

"All we can do is promise a very thorough investigation — getting to the bottom of this," Rosenberg said. "And mourn those who we've lost."

Figg Bridge Engineers designed the bridge and said in a statement it was "stunned by today's tragic collapse" and would fully cooperate in an investigation.

"In our 40-year history, nothing like this has ever happened before," the statement said.

Member station WLRN reports, "Figg was fined for the South Norfolk Jordan Bridge collapse in 2012 in Virginia. According to the Virginia Pilot, the state issued four $7,000 fines" for violations that ranged from changing a girder to not performing inspections. 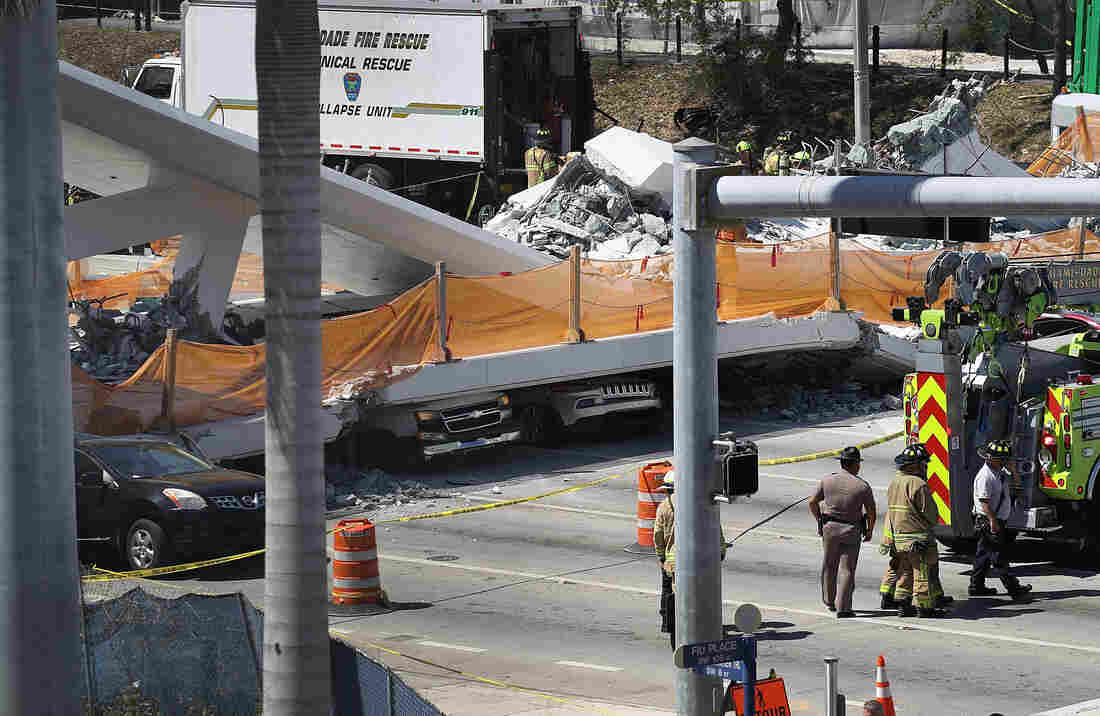 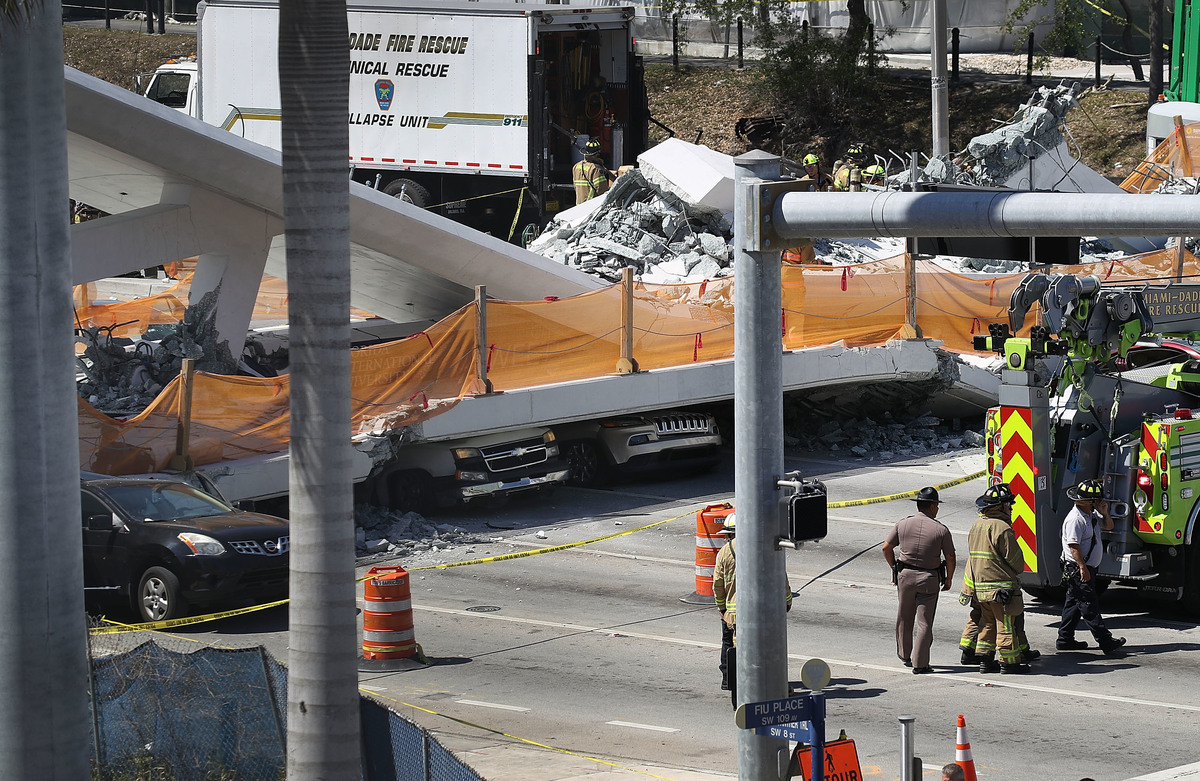 A pedestrian bridge under construction near Florida International University in Miami collapsed Thursday, trapping people and vehicles underneath.

MCM Construction was building the Florida bridge and posted a statement expressing distress over the collapse and referring to a loss of life.

Witnesses tell WLRN the structure fell without warning around 1:30 p.m. as a traffic light went red and concrete fell on stopped vehicles. Other motorists rushed out of their cars to help.

The main span of the bridge was installed on Saturday. The bridge was not expected to open to foot traffic until early next year, reports The Associated Press.

It was intended to boost student safety, spanning a portion of U.S. Highway 41 known as the Tamiami Trail, to help people cross from campus to the city of Sweetwater, where the university said thousands of students live.

The university is currently on spring break.

The National Transportation Safety Board said it would send a "go team" to investigate the incident. 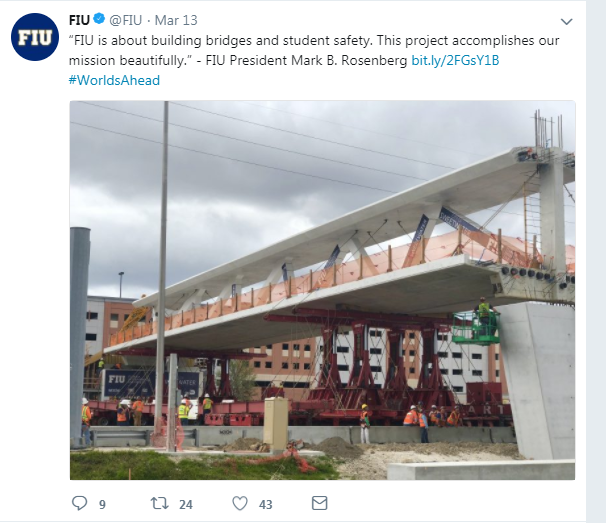 In a Tuesday news release, the university touted the rapid installation of the "first-of-its-kind pedestrian bridge," which the AP explains allowed it to be "prefabricated then swung into place before its central support tower was built."

"The 174-foot, 950-ton section of the bridge was built adjacent to Southwest Eight Street using Accelerated Bridge Construction (ABC) methods, which are being advanced at FIU's Accelerated Bridge Construction University Transportation Center (ABC-UTC). This method of construction reduces potential risks to workers, commuters and pedestrians and minimizes traffic interruptions. The main span of the FIU-Sweetwater UniversityCity Bridge was installed in a few hours with limited disruption to traffic over this weekend."

A now-deleted tweet posted by FIU on Tuesday displayed a photo of the bridge.

In Tuesday's release, the university added, "The FIU-Sweetwater UniversityCity Bridge is the largest pedestrian bridge moved via Self-Propelled Modular Transportation in U.S. history. It is also the first in the world to be constructed entirely of self-cleaning concrete. When exposed to sunlight, the titanium dioxide in the concrete captures pollutants and turns it bright white, reducing maintenance costs."

White House press secretary Sarah Huckabee Sanders said President Trump is aware of the bridge collapse and will continue to monitor the situation.