Accessibility links
Kentucky Votes To Ban Child Marriage : The Two-Way Kentucky joins the growing list of states imposing age limits and other restrictions on child marriage, to rein in a practice that has been largely overlooked in the United States.

Kentucky is one of 25 states where, provided certain conditions are met, a child can walk down the aisle to marry at any age – no bride or groom is too young.

A bill approved by the Kentucky Legislature and headed to the governor's desk would change that. Kentucky's S.B. 48 would make it illegal for anyone 16 and younger to marry. The bill cleared the Kentucky House of Representatives on Friday.

All states generally require those 17 and younger to get consent from a parent or judge. Nine states, including Kentucky under current law, allow officials to waive the minimum age requirements for girls who are pregnant.

"People assume that child marriage is a thing of generations past," says Jeanne Smoot, senior counsel at the Tahirih Justice Center. The Virginia-based advocacy group is leading a nationwide push to raise the legal age of marriage to 18.

[Kentucky is] poised to leapfrog from having some of the most alarming provisions in the country to being a national leader in the fight to end child marriage.

Smoot says that Kentucky, which has one of the highest rates of child marriages in the nation, allows for children to be "abused and exploited in the guise of marriage — and effectively for no questions to be asked, provided that the right signatures appear on a form that's presented to the clerk."

Kentucky law "turns a truly blind eye to the risks and harms of child marriage," she says.

Advocacy groups cite research indicating that those risks and harms include forfeited education, a greater likelihood of poverty, and increased rates of disease and mental health problems, as well as a higher incidence of domestic violence.

The rules governing marriage have not kept pace with changes in other areas of the law. The result is a disconnect between civil and criminal law. In some states, an unmarried pregnant 13-year-old is, by definition, a victim of statutory rape. To a prosecutor in that state, the pregnancy is proof that a crime has occurred, while to a civil judge or clerk, it could be a reason for granting a marriage license.

"Think about it," says Smoot. "The criminal law may presume that sex between parties that young ... must be so heinous, so likely to be forced, that you can charge a felony ... even if it happened only once. But the civil law in that same state may hand those same parties a marriage license, knowing full well that within marriage, sex will likely happen again and again for years to come."

The rates of child marriage have declined steadily nationwide since 2000, and recently the pace of change at the legislative level has picked up. Since 2016, Virginia, New York, Connecticut and Texas have imposed new limits on child marriage; the Florida Legislature passed a new law earlier this month following a years-long campaign, led by a woman who was forced at the age of 11 to marry a much older man. Republican Gov. Rick Scott is expected to sign the bill.

With S.B. 48 now on its way to the Kentucky governor's desk, Smoot says the state is "poised to leapfrog from having some of the most alarming provisions in the country to being a national leader in the fight to end child marriage." She gives much of the credit to the growing number of survivors who are choosing to speak up, and to one in particular — Donna Pollard, of Louisville, Ky.

A child bride grows up

Pollard had a rocky childhood. At age 14 she was sent to a behavioral treatment facility. There, she met a 29-year-old man she now refers to as her "perpetrator." (Pollard declines to supply his name.) She says he used his position as an employee to begin "grooming" her – writing letters, finding secluded places where they could be together. He was jealous, controlling. "But as a 14- or 15-year-old, I just thought it meant that he loved me so much."

At her mother's urging, they got married when Pollard was 16. She says the groom picked a spot known for quickie weddings, where he thought they wouldn't get too many questions. He was right.

"The clerk didn't even look at me," Pollard recalls. "I remember very clearly her saying, 'Which one's the minor?' without even looking. And in that moment I realized, something's not right. But I didn't trust myself enough to speak up."

Pollard was 18 when their daughter was born. She says her "lightbulb moment" came as she and her husband were having a vicious fight – and the baby, who was watching nearby, started laughing.

"I remember thinking at that time that, if I didn't get out of there, she was going to grow up thinking this was normal." 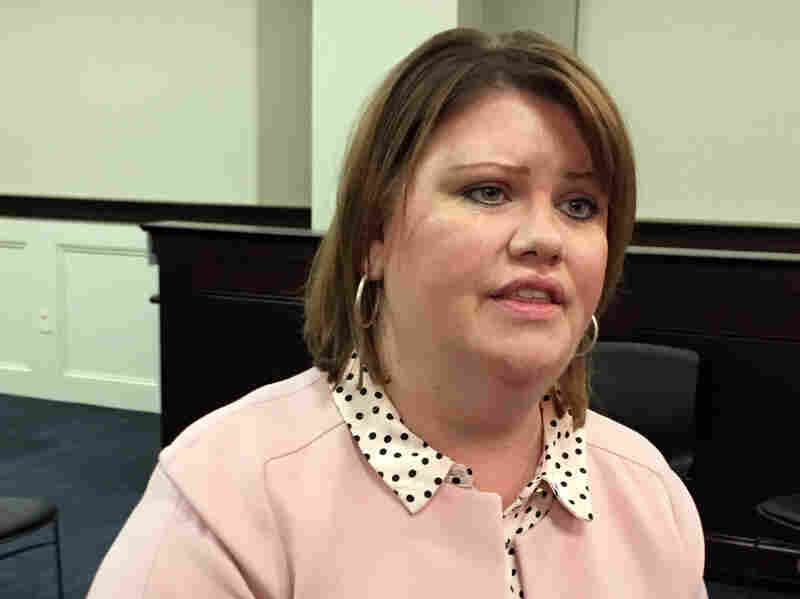 Donna Pollard speaks to reporters in Frankfort on Tuesday about her efforts to ban most child marriages in Kentucky. Adam Beam/AP hide caption 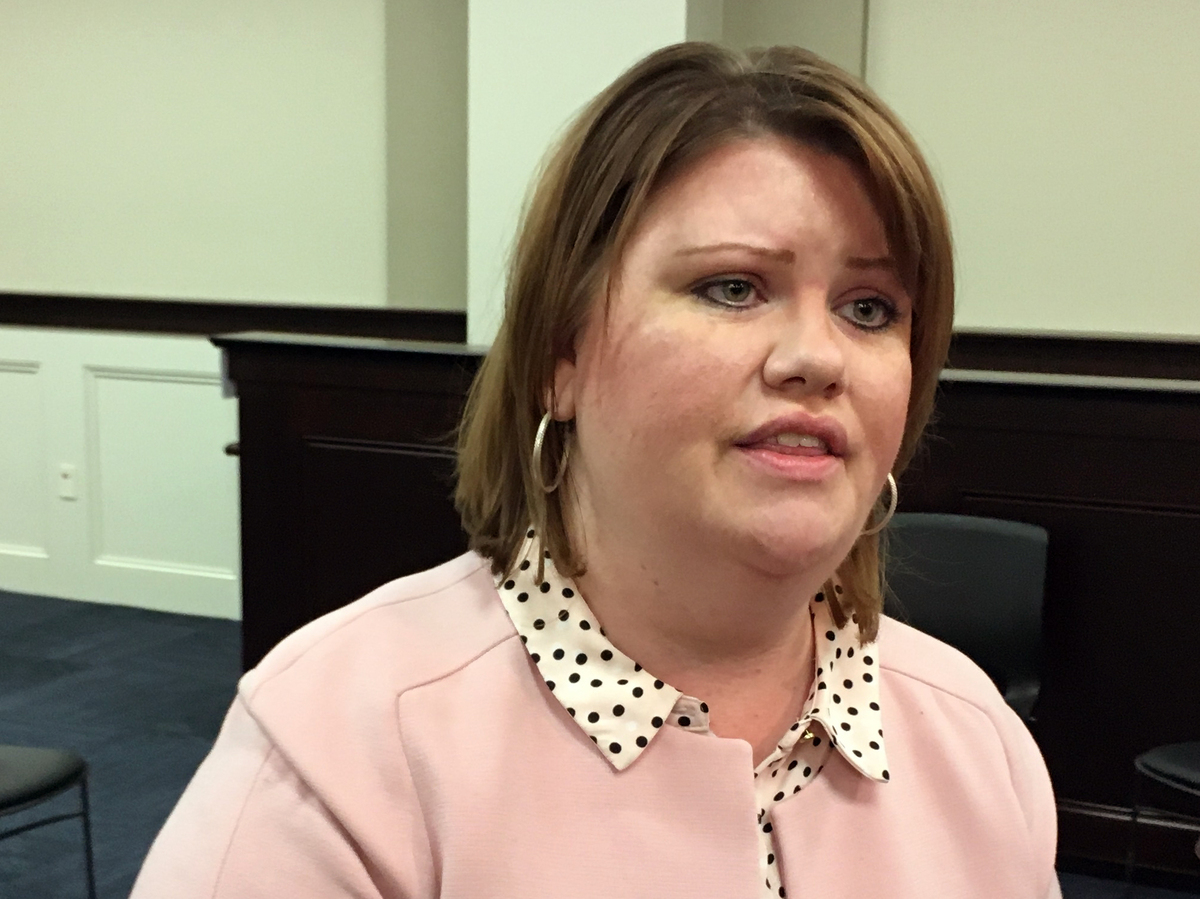 Donna Pollard speaks to reporters in Frankfort on Tuesday about her efforts to ban most child marriages in Kentucky.

More than a decade later, Pollard would tell her story to state Sen. Julie Raque Adams, and the Louisville Republican was quick to act.

In addition to making it illegal for anyone 16 and younger to marry, Kentucky's bill would eliminate the pregnancy exception that has served as a loophole for men to avoid prosecution for having sexual relations with a minor. A 17-year-old seeking to marry would need the approval of a family court or district court judge in addition to that of a parent.

The role of parental consent has been a sticking point in Kentucky and in other states. Conservative lawmakers and organizations such as the Kentucky Family Foundation say parents, not courts, should have the final say in whether a minor child is permitted to marry, and they have successfully pushed back against legislation that did not include provisions for a parent's consent. Opponents of child marriage counter that blanket minimum-age requirements may be necessary to protect minors from parental coercion.

Parental pressure is often closely associated with religious convictions — convictions that the minor may or may not share. In May 2017, Republican Gov. Chris Christie cited concerns about religious liberty when he vetoed a bill that would have made New Jersey the first state to ban child marriage without exception.

Coordinated efforts to change child marriage laws were already underway when the #MeToo movement took hold — arguably changing the cultural and political landscape for issues of importance to women. For her part, Smoot is heartened by what she describes as a "quickening" in the degree of awareness among those in a position to effect change.

"I think more people are alert and attuned now to how predatory behavior can play out — and what some of the elements are, the power imbalances ... that can trap someone in an abusive [situation]," she says.

In addition, an earlier version of the graphic incorrectly indicated that the minimum age to marry in New York is 14. It was recently raised to 17. Also, the graphic did not make clear that there are exceptions to the minimum age for marriage for court-emancipated minors in Texas and Virginia.