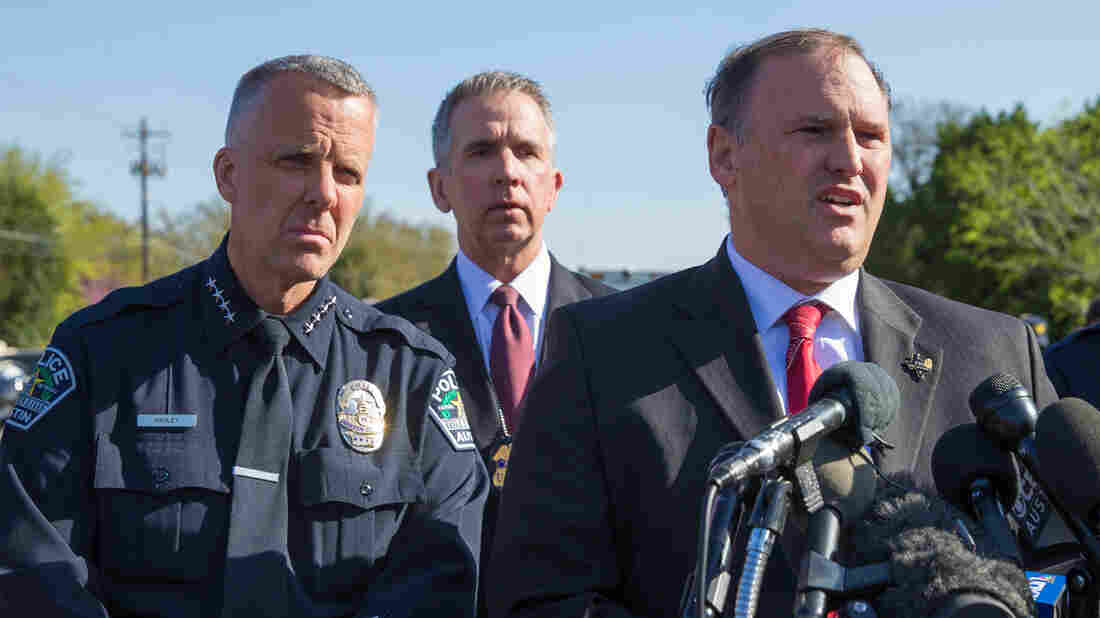 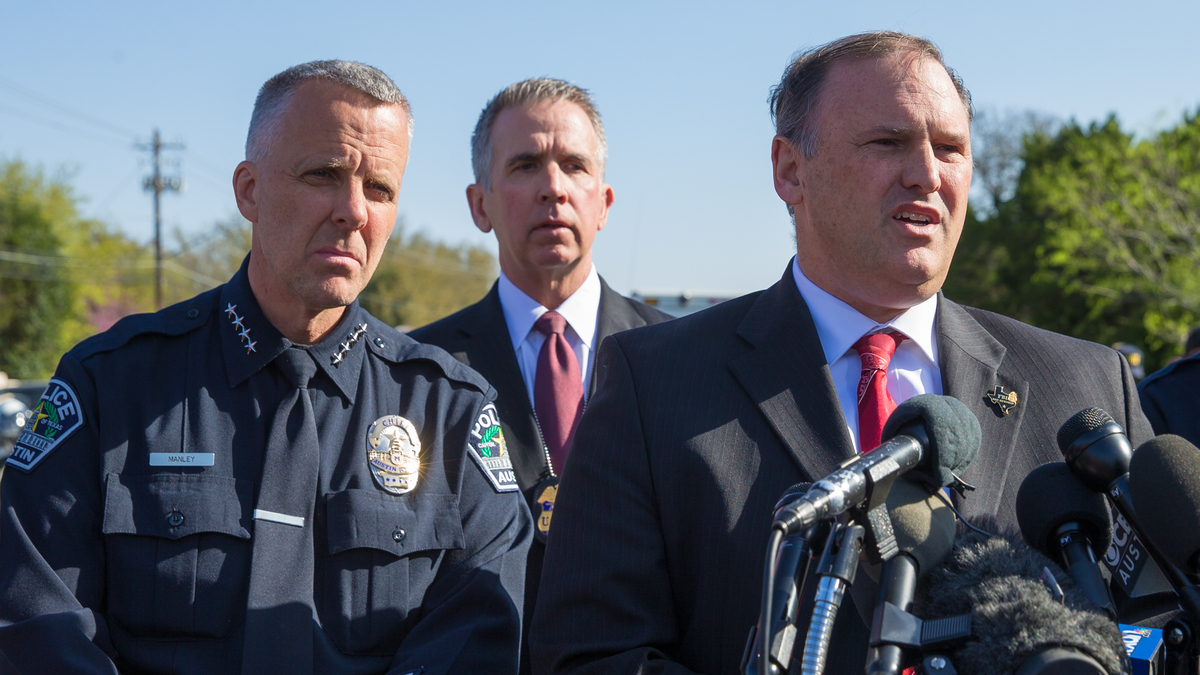 Authorities say a fourth device that exploded in Austin, Texas, this month indicates a "serial bomber" — and one who is more sophisticated than the earlier bombs suggested.

Austin Chief of Police Brian Manley said Monday that investigators believe a tripwire might have been used in the device that exploded in a Southwest Austin neighborhood on Sunday night, injuring two men.

"The belief that we are now dealing with someone who is using tripwires shows a higher level of sophistication, a higher level of skill," he said, adding that if residents see suspicious objects that look out of place, "Do not even approach it, but instead call 911."

The fourth device exploded in the Travis Country neighborhood, which adjoins the Barton Creek Greenbelt. Two young men were walking along a sidewalk or the grassy area along it when they apparently tripped a wire, causing the bomb placed along a fence to detonate.

The neighborhood remains on lockdown. Police are asking residents for any video footage from any home security cameras that might show a possible suspect. No suspect has been identified in the case, which now has more than 500 agents working on it.

Manley said the victims of the latest blast are white males, ages 22 and 23, who both are now in the hospital with serious injuries. 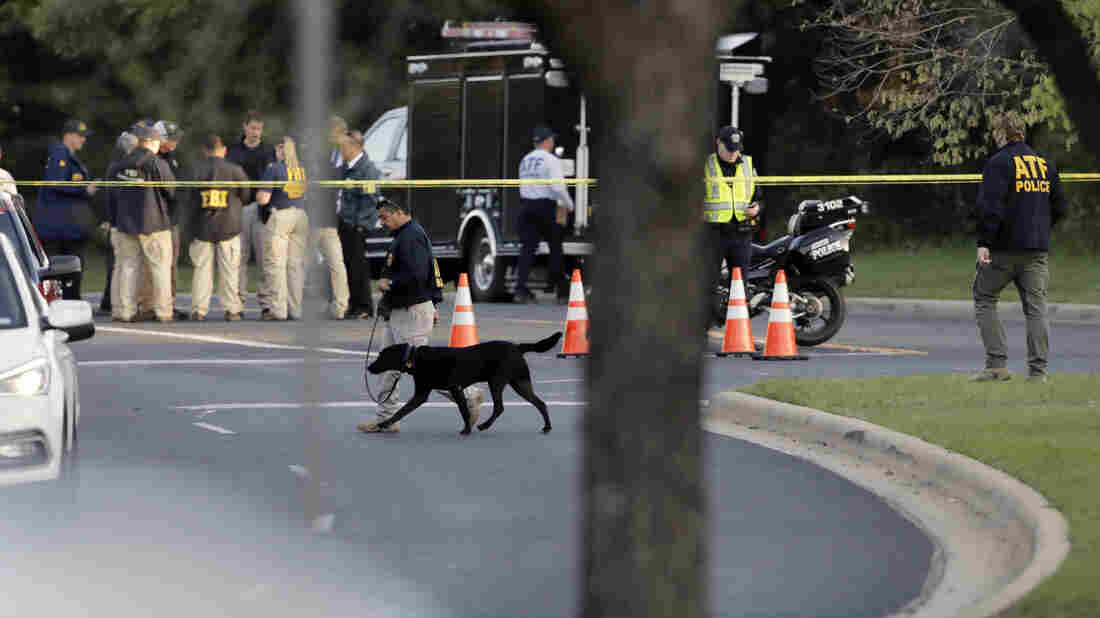 Officials work Monday near the site of the latest explosion in Austin. Police warned nearby residents to remain indoors overnight as investigators looked for possible links to other deadly package bombings elsewhere in the city this month. Eric Gay/AP hide caption 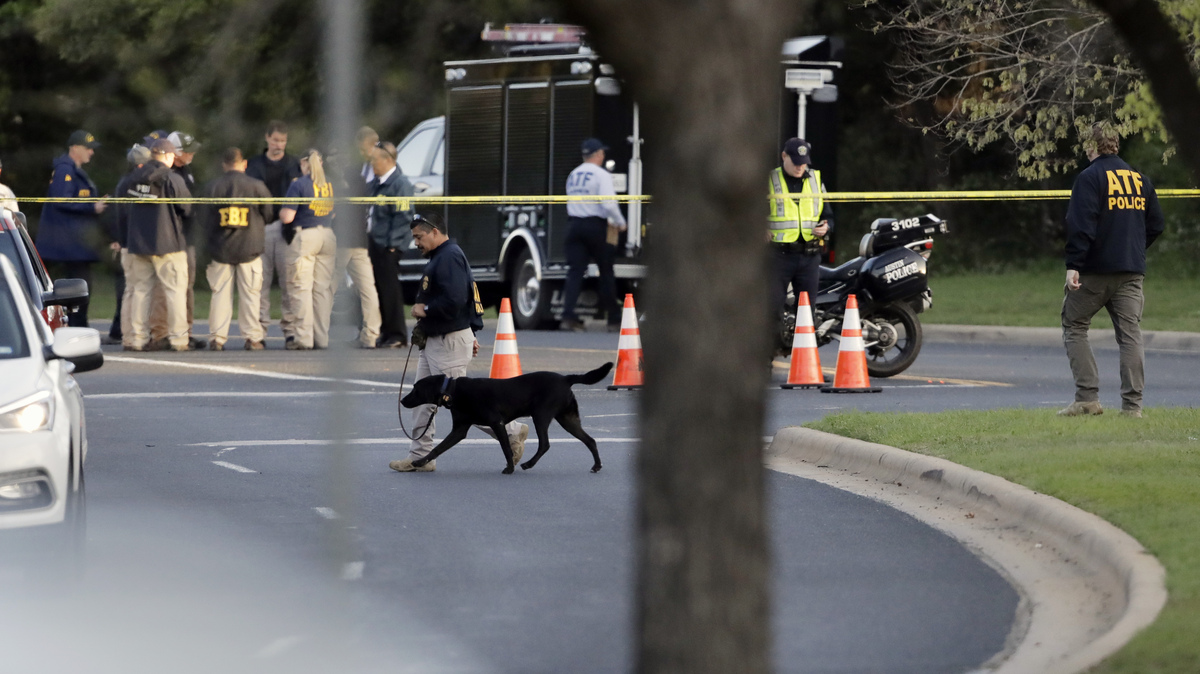 Officials work Monday near the site of the latest explosion in Austin. Police warned nearby residents to remain indoors overnight as investigators looked for possible links to other deadly package bombings elsewhere in the city this month.

The previous package bombs that have exploded in Austin since March 2 targeted people of color, as the Two-Way has previously reported: "The first two packages were left at the homes of black residents, while Manley described the septuagenarian victim of the third blast as a Hispanic woman."

With the fourth bomb, the investigation seems to have moved into a new phase for investigators — because of the device's design and the randomness of its victims.

"With this tripwire, this changes things," said Christopher Combs, special agent in charge of the FBI's San Antonio office. "It's more sophisticated. It's not targeted to individuals. We're very concerned that with tripwires, a child could be walking down a sidewalk and hit something."

Austin resident Shelley Leath lives close to the site of the fourth blast; her son heard the explosion from his room.

"I've never seen so many police and ATF and FBI agents in one place," she told NPR on Monday. "There are helicopters overhead right now. There were [helicopters] last night until about 11:30 at night. So it's a little unsettling."

Agents from ATF stopped by Monday, inquiring about the trails behind her apartment building and whether she had seen anything suspicious.

"We have been conditioned ... over the last week, week and a half to keep an eye out for packages, and that's a fairly easy thing to do. If you didn't order something, then don't pick up a package on your front door," she said. "But just walking down the street or walking your dog or rolling over a wire that can't be seen. ... It's scary."

"My son rides his bike all over this neighborhood, rides it down to the Greenbelt," she said. "I guess we can't do that. I'm not real sure."

The city's police chief said it was too soon to know the motive behind the attacks or label them as domestic terror.

"That is something we are going to analyze," Manley said. "We are clearly dealing with what we expect to be a serial bomber at this point, based on the similarities between what is now the fourth device. ... We will have to determine if we see a specific ideology behind this, or something that will lead us, along with our federal partners, to make that decision."

"As we said from the beginning, we were not willing to classify this as terrorism, as hate, because we just don't know enough," he added. "And what we have seen now is a significant change from what appeared to be three very targeted attacks, to what was last night an attack that would have hit a random victim that happened to walk by. So we've definitely seen a change in the method that this suspect ... is using."

A tripwire can be made of materials including filament wire, metal or fishing line.

Authorities are offering a $100,000 reward for information leading to the arrest and conviction of a suspect in the case; Texas Crime Stoppers is offering an additional $15,000.

"We need this to stop," Combs said. "We are very concerned that people can get hurt just by walking now, when we have tripwires. A hundred thousand dollars is a lot of money, and we're hoping somebody knows something, and that they can call us, and help us stop what is going on here."

He also asked for the bomber to contact law enforcement.

"We don't understand why they are doing this," said Combs. "We have people here that he can talk to, and we would like that to occur. So we would like him to reach out and talk to us."