Accessibility links
Austin On Edge As Another Explosion Is Reported Late Tuesday : The Two-Way Austin police say a military-type artillery simulator injured an employee at a Goodwill store late Tuesday, but that it was unrelated to earlier package bombs in an around the city this month. 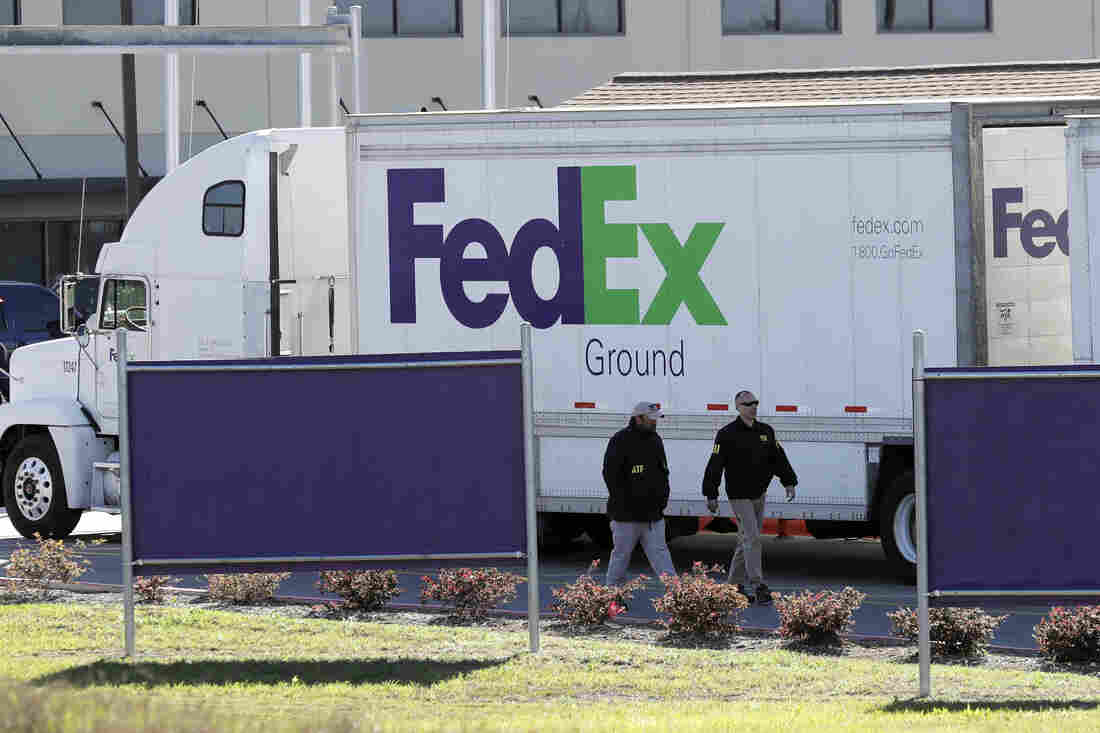 Agents from the Bureau of Alcohol, Tobacco, Firearms and Explosives join the investigation at a FedEx distribution center in Schertz, Texas, where a package exploded Tuesday. Authorities believe the incident is linked to the recent string of Austin bombings. Eric Gay/AP hide caption 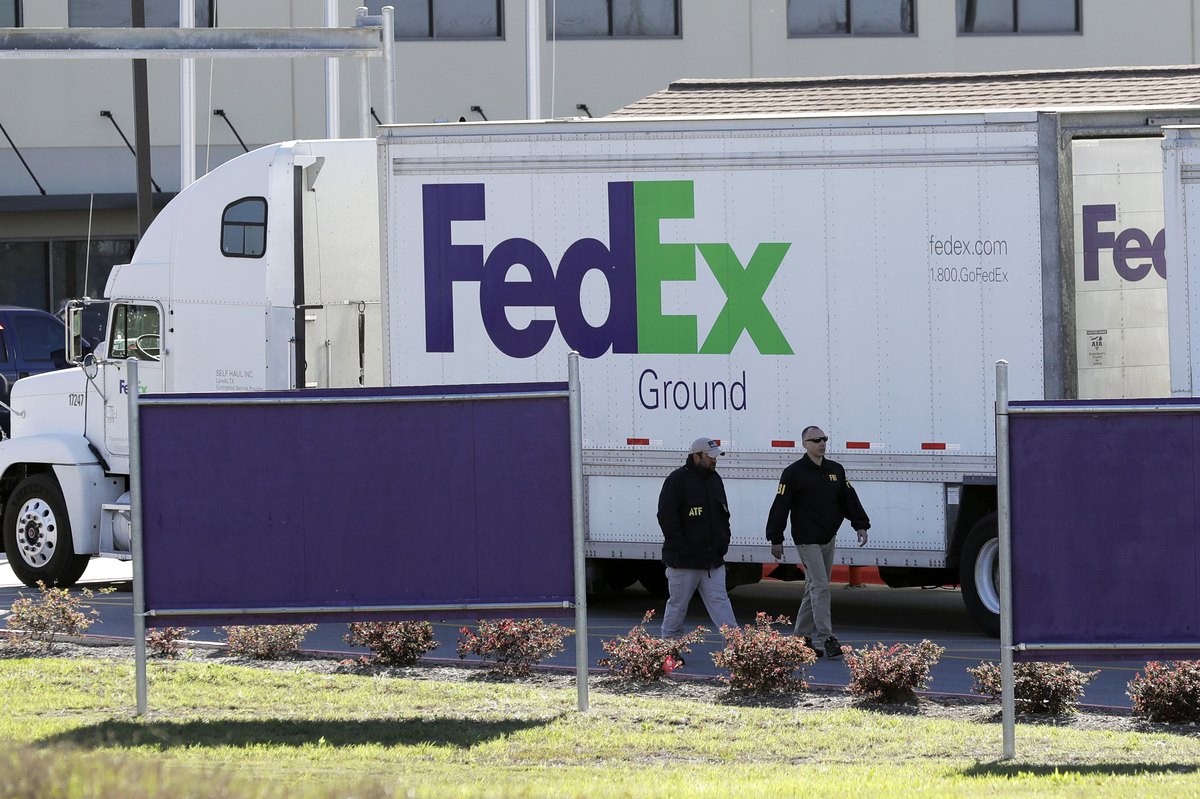 Agents from the Bureau of Alcohol, Tobacco, Firearms and Explosives join the investigation at a FedEx distribution center in Schertz, Texas, where a package exploded Tuesday. Authorities believe the incident is linked to the recent string of Austin bombings.

Another explosion in Austin, Texas, injured one person Tuesday night, but police confirmed that the explosion was unrelated to the previous package bombs that have killed two people and injured several others this month.

The explosion occurred after a "military-type memento" was dropped off at a Goodwill store on Austin's south side, Assistant Police Chief Ely Reyes said. He further described it as a 40mm artillery simulator.

Reyes said the simulator "initiated" at about 7 p.m. after being handled by a Goodwill employee.

"After our investigation on scene, we did determine that this was not an explosive device and was not related to the other bombings," Reyes told reporters. "I will let you know that a lot of times these military-type mementos will be found by a family and they will not know how to dispose them," he added.

Authorities say the employee, a man in his 30s, suffered "potentially serious, not expected to be life threatening, injuries."

Federal and local authorities say that two packages found earlier on Tuesday at separate FedEx facilities in the Austin/San Antonio area are connected to the four previous package explosions that occurred between March 2 and March 18 in Austin.

A package detonated Tuesday at around 12:25 a.m. local time at a facility in Schertz, Texas, northeast of San Antonio, the FBI says. "One person was treated and released at the scene," the Schertz Police Department said.

Schertz Police Chief Michael Hansen said that the package blew up while it was on an automated conveyor and that a FedEx worker who was nearby "later complained of ringing in the ears."

"We were very fortunate" that there weren't any other injuries, Hansen added.

"It was mailed from Austin, and it was mailed back to Austin" going through the FedEx center in Schertz, state Attorney General Ken Paxton told KXAN-TV news.

The package that exploded, Paxton said, had been addressed to an Austin resident. And he confirmed that he had also been told about a second suspicious package in the FedEx system on Tuesday.

FedEx says, "The individual responsible also shipped a second package that has now been secured and turned over to law enforcement."

In a statement late Tuesday evening, the Austin Police Department (APD), the FBI and the Bureau of Alcohol, Tobacco, Firearms and Explosives (ATF) released more details about the second package found today.

"Later that morning, at approximately 6:19 a.m., APD received a call regarding a suspicious package at 4117 McKinney Falls Parkway in Austin. APD, along with the FBI and the ATF, responded. It was determined the package contained an explosive device and was disrupted by law enforcement. No injuries were reported."

Officials say the package that exploded may have come from an address on Brodie Lane that houses a FedEx Office printing and shipping office, part of the large Sunset Valley Shopping Center, southwest of downtown Austin. The Sunset Valley Police Department says:

After the latest in a string of bombings focusing on Austin, FBI spokeswoman Michelle Lee said, "We believe that the explosion is likely connected" to those earlier blasts.

Hours after the blast near San Antonio, Austin police headed to the scene of a suspicious package that was reported at 4107 McKinney Falls Road — an address that corresponds to a FedEx Ground facility in Austin. The city's fire department said a hazmat team was there to help with the investigation.

In a midday update on the situation at McKinney Falls, Austin Senior Police Officer Destiny Winston said that police officers had confirmed a suspicious package there and that the bomb squad was investigating, along with federal agencies.

"There is an army of law enforcement folks that are here," Austin Mayor Steve Adler told NPR's David Greene about the effort to end the bombing threat. "Hundreds of federal agents, multiple federal agencies, hundreds of agents working on this outside of Austin and Texas."

Adler added, "I'm confident they're going to figure out who's responsible for this and stop it."

The investigation into the Schertz blast was slowed by the need to ensure the FedEx facility was safe, FBI Assistant Special Agent in Charge James Smith said at a midmorning update.

"We're going to be here for a little while," Smith said.

Investigators said Monday that a "serial bomber" is behind the Austin attacks that have killed two people and injured several others. After a blast on Sunday that was triggered by a tripwire, investigators said the culprit was likely more sophisticated than they had first realized.

Investigators believe the Austin bombings are related, Austin Police Chief Brian Manley said, "because of some of the specific components of these devices. We are sending all of the evidence to the ATF lab in Quantico, and they are conducting all of the post-blast analysis of the evidence that we have recovered."

Those experts, Manley said, "are reconstructing these devices so that they understand what the firing mechanism is" and what explosive is being used.

Police have urged Austin residents to report any suspicious packages. The Austin Police Department says it has received a total of 1,257 such calls since March 12 — including 420 in the 24 hours between 8 a.m. Monday and 8 a.m. Tuesday.

"I want to continue to remind our community to pay close attention to any suspicious device," Manley said Tuesday, "whether it be a package, a bag, a backpack or anything that looks out of place, do not approach it."

The bombings have raised the question of whether the case can be more accurately seen as domestic terrorism or a hate crime — in part because the first victims of the bombs were people of color, including two black men who were killed.

When asked how he sees the case, Adler said, "I certainly know there is significant fear and terror being felt by people in the community." He added that law enforcement is approaching the bombings with an open mind and exploring every possibility.

It seems that Tuesday's explosion was not as dangerous as it might have been had it reached its target.

"[T]he package was moving from an elevated conveyor belt to a lower section when it exploded," reports CBS Austin.

The package "contained shrapnel consisting of nails and pieces of metal, sources said," according to the CBS affiliate, which said the Schertz facility has 75 employees.

FedEx released a statement about the blast in Schertz:

"FedEx has confirmed that a package detonated at a San Antonio FedEx Ground facility early this morning. We have also confirmed that the individual responsible also shipped a second package that has now been secured and turned over to law enforcement. We are thankful that there were no serious injuries from this criminal activity. We have provided law enforcement responsible for this investigation extensive evidence related to these packages and the individual that shipped them collected from our advanced technology security systems. The safety and security measures in place across the FedEx networks are designed to protect the safety of our people, customers and communities, and to assist law enforcement as appropriate."

The Texas bombing case now includes hundreds of law enforcement agents from local police, the FBI and ATF, as well as a reward of up to $100,000.