Accessibility links
A Chinese Space Lab Will Soon Fall From The Sky. Where It Lands, No One Knows : The Two-Way Most of the Chinese space lab, the size of a city bus, will burn up in the atmosphere, but some debris may survive re-entry. 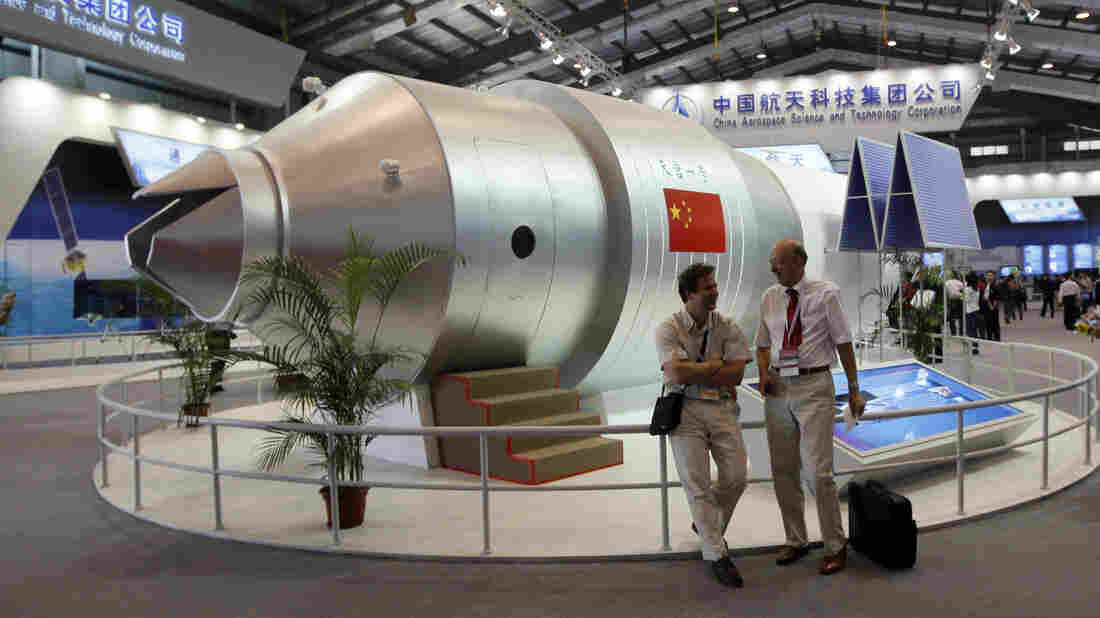 A model of the Tiangong-1 space station at a Chinese airshow in 2010. The real Tiangong-1 will reenter the atmosphere around the end of March. Kin Cheung/AP hide caption

A Chinese space lab the size of a city bus will soon be falling back to Earth, and no one knows exactly where bits of it might crash down.

Current predictions say that the 19,000-pound lab should re-enter the earth's atmosphere sometime in the last few days of March or the first few days of April.

The lab is called Tiangong-1, which means "heavenly palace." China launched it into space in 2011. The outpost was briefly visited twice by Chinese taikonauts, including Wang Yaping, who beamed down a science lecture to schoolchildren.

Although Tiangong-1 has been called a Chinese "space station," it actually is just a precursor to China's planned space station, says Joan Johnson-Freese, a professor at the Naval War College.

Since 1992, she says, China has been following a methodical program "to demonstrate human space flight and culminate with a large space station."

For that, China's space agency needs to get experience with things like docking and long-term life support in space. Tiangong-1 and another lab in orbit called Tiangong-2, "have been technology test bed laboratories to do experimentation on all those different areas and more," she explains.

Now, though, Tiangong-1 is headed back down. And even though space junk this size falls to Earth a few times a year, it's usually something like a spent rocket stage — not a home-away-from-home for space travelers.

"These kinds of events are noteworthy and people in this business kind of watch to see what they can learn about how these things come apart as they come down," says Bill Ailor of the Aerospace Corporation's Center for Orbital and Reentry Debris Studies.

Most of it, though not all, should burn up during the fiery re-entry.

The possible impact zone covers about two-thirds of the globe, including a lot of the continental United States. But exactly where and when is hard to predict because the vehicle will interact with the atmosphere, which is constantly changing.

Still, don't worry about getting hit, says Ailor. "It's just not a very likely event that a particular person would have a problem with it," he says.

In 60 years of space exploration, only one person — an American woman named Lottie Williams — is known to have been struck by falling space junk, says Ailor, "and it was just like a piece of fabric material that kind of brushed her on the shoulder."

He hopes that someone gets to see the bright streaks created by Tiangong-1 breaking up and burning.

"It would be a beautiful thing to watch," says Ailor.

But since most of our planet is covered by oceans, he says the most likely scenario is that it will come down over the water and never be seen or heard from again.