Accessibility links
23 Russian Diplomats Fly Home, Expelled From U.K. Amid Poisoning Dispute : The Two-Way The move is intended to punish Moscow for an alleged nerve agent attack on a former Russian spy and his daughter on British soil. Moscow has responded by expelling 23 British diplomats in turn. 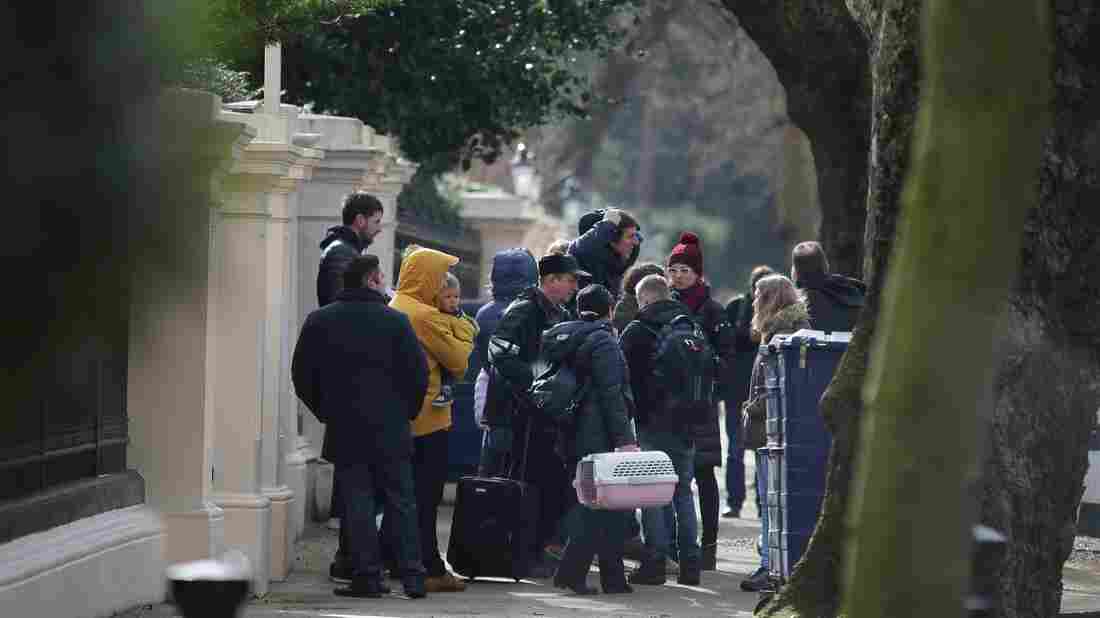 A small crowd gathered outside the Russian Embassy in London on Tuesday, as the nearly two dozen Russian diplomats returned to their country under a mandate from the British government. The U.K. expelled the diplomats in retaliation for the spy poisoning case earlier this month. Daniel Leal-Olivas/AFP/Getty Images hide caption 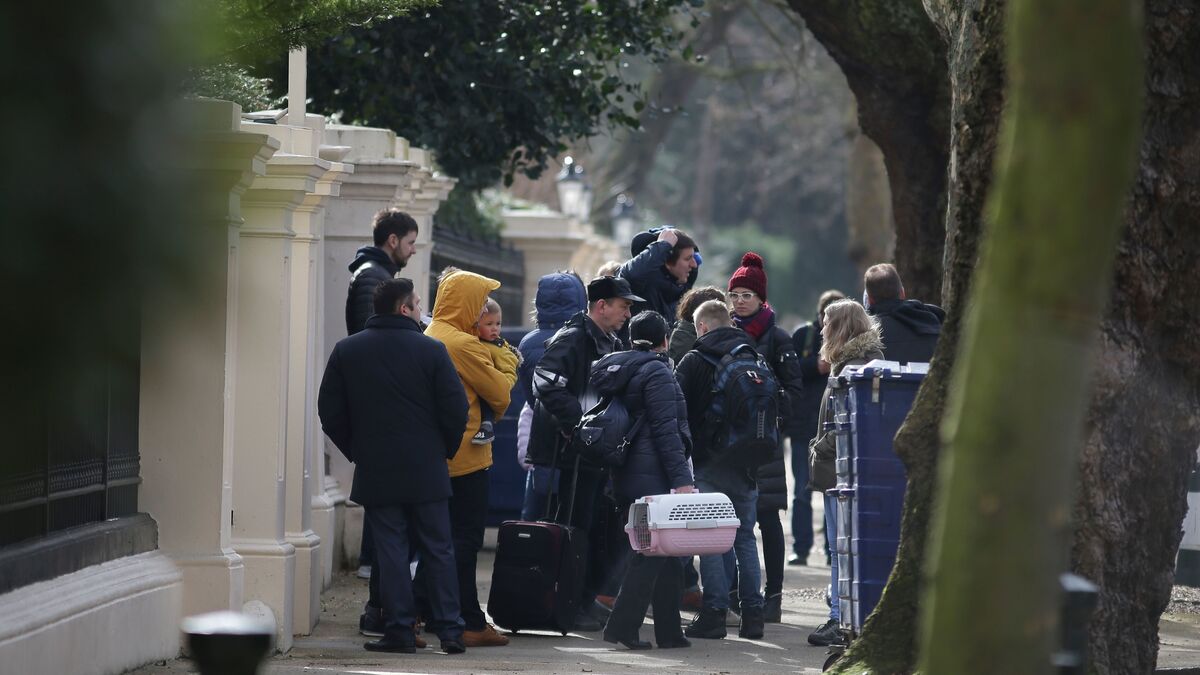 A small crowd gathered outside the Russian Embassy in London on Tuesday, as the nearly two dozen Russian diplomats returned to their country under a mandate from the British government. The U.K. expelled the diplomats in retaliation for the spy poisoning case earlier this month.

The Russian Embassy in London drew an uncommon scene Tuesday, gathering crowds of people, vans and diplomatic cars at its gate even as the building saw the departure of a number of far more familiar faces: the 23 Russian diplomats expelled by the British government. Russia's state-run news agency, TASS, reports that the diplomats and their families departed the compound to the strains of a Russian patriotic march.

The Embassy personnel, ejected in retaliation for the use of a military-grade nerve agent on British soil, flew home to Russia the same day.

The move comes more than two weeks into the fallout surrounding the poisoning of Sergei Skripal, a former Russian spy and current British citizen, and his daughter earlier this month. The two remain hospitalized in critical condition, debilitated by what the U.K. government calls a deadly nerve agent.

Novichok, the substance allegedly used in the attack, is "just about as Russian as vodka," NPR's Scott Simon reported — and its use on British soil drew the reprisal from the U.K., as well as the possibility of still more. Several other countries and organizations, including the U.S. and the European Union, have supported the U.K. response.

"We actually have evidence within the last 10 years that Russia has not only been investigating the delivery of nerve agents for the purposes of assassination," British Foreign Secretary Boris Johnson told the BBC, "but has also been creating and stockpiling Novichok."

The Kremlin, for its part, has called the allegations "groundless" and has announced it will expell 23 British diplomats and close the British Consulate in St. Petersburg in turn. Those British personnel are expected to leave Moscow by Saturday.

Russian President Vladimir Putin won another six-year term just two days ago, taking the vote in a landslide after barring his principal rival from running. President Trump congratulated him on the victory over the phone Tuesday, less than a week after the U.S. leveled new sanctions on Russian individuals over their alleged interference in the 2016 U.S. election.

"We will probably get together in the not-so-distant future," Trump told reporters Tuesday, adding that many items would be on the agenda for the conversation. (White House press secretary Sarah Sanders later said there are no specific plans at this time for a meeting between the two.)

In the meantime, London's Metropolitan Police continue to investigate the attack on the Skripals, saying it's likely to take "many months" for them to determine the culprit.

"Officers continue to trawl through 4,000 hours of CCTV and examine nearly 800 exhibits that have been seized," the department said in a statement Monday. "Around 400 witness statements have been taken and many more will follow in the coming days and weeks."

Police are also investigating the death of a Russian tycoon in his London home last week. Police suspect that Nikolai Glushkov, an erstwhile supporter of Putin who turned vocal critic, was murdered — but they added that "there is no evidence to suggest a link" to the Skripals' poisoning.