Accessibility links
Lawsuits Force Alleged Trump Affairs, Sexual Misconduct Claims Back Into Public Eye : The Two-Way A former Playboy model is suing a company she says is trying to keep her silent about her alleged relationship with the president, while a judge rules a defamation suit against him can move forward. 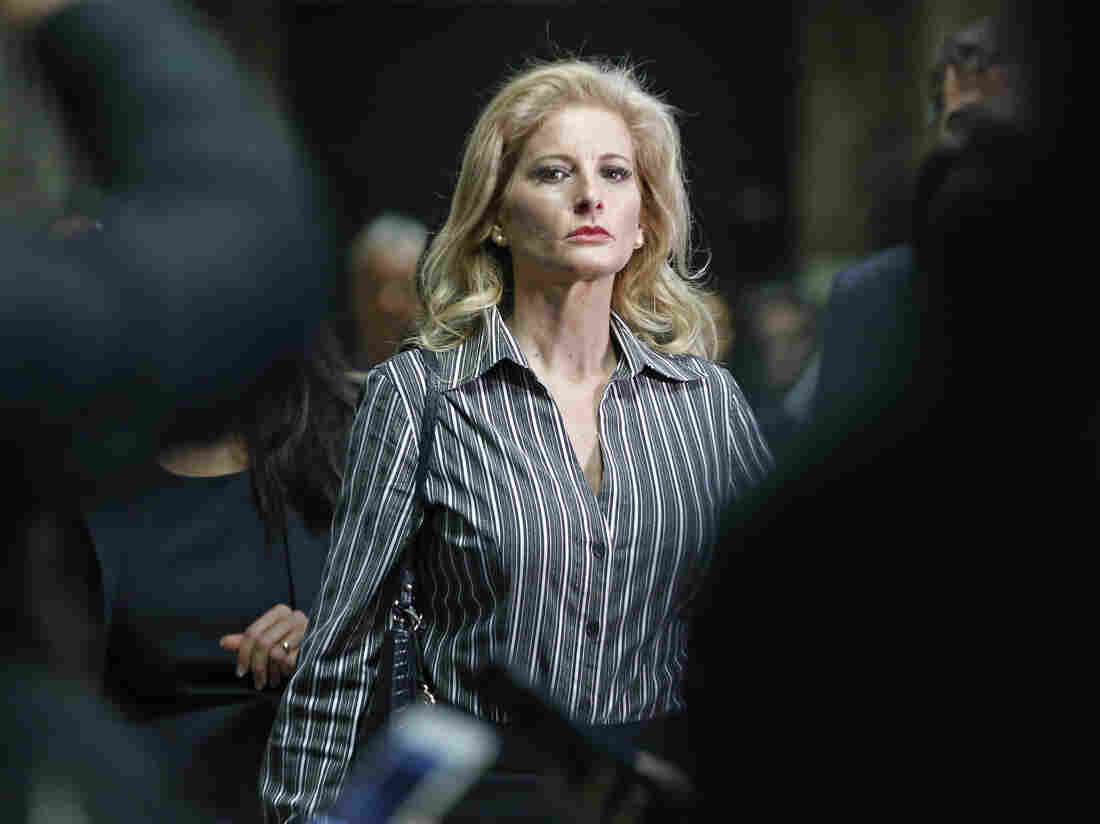 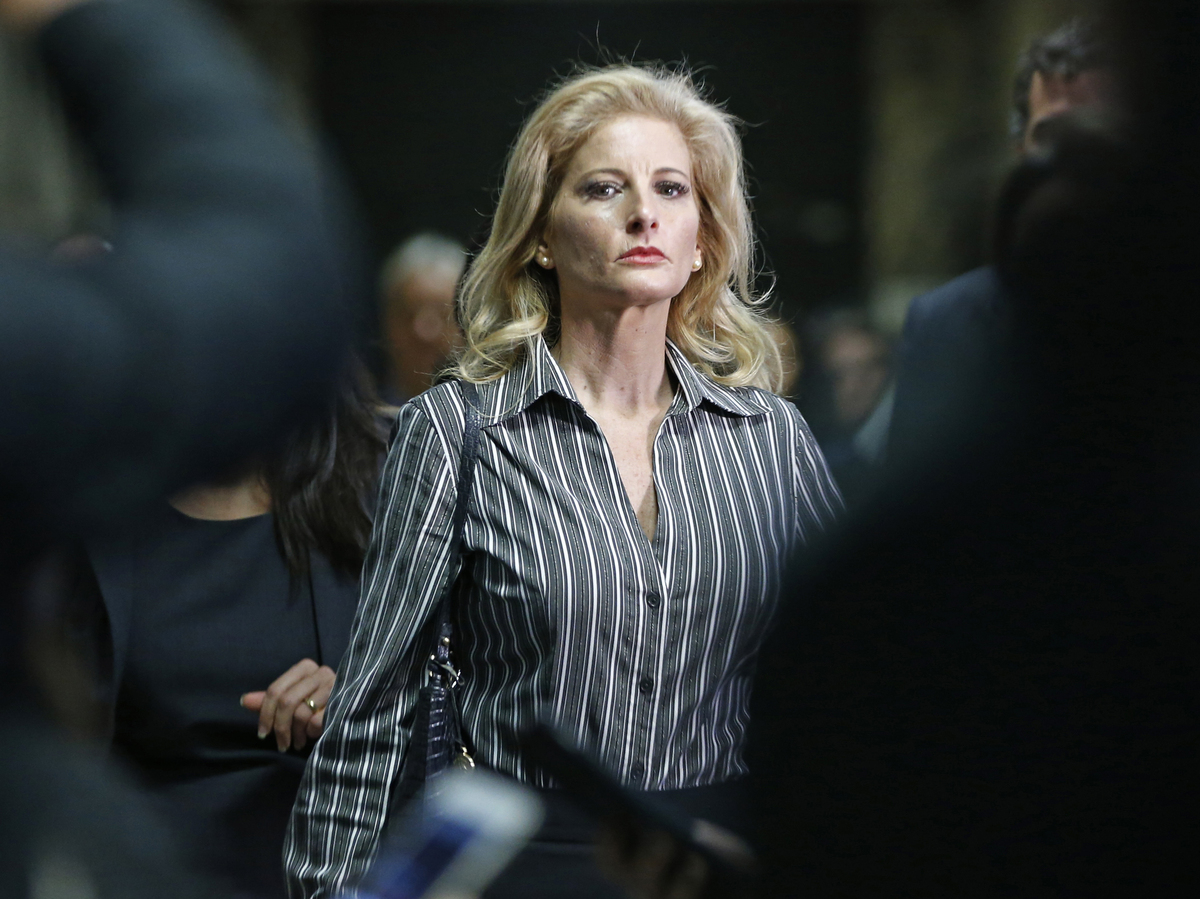 Previously dismissed by President Trump and his allies after alleging sexual affairs or unwanted sexual advances by the real estate tycoon, a number of women are asking the courts to help them break their silence.

A former Playboy model who says she had a 10-month extramarital affair with Trump filed a lawsuit in California on Tuesday, asking to be released from an agreement she signed to keep quiet about the relationship. And in New York, a Supreme Court judge ruled that a defamation case involving the president and a former contestant on The Apprentice who claims he sexually harassed her can move forward in state court.

The legal developments are a blow to Trump and his lawyers who have so far denied all of the allegations against the president and have been fighting to keep salacious claims out of the public eye. The suits could force Trump, his campaign team and current White House staffers to publicly disclose involvement in any payoffs to women who contend they had sexual relationships with Trump while he was married to first lady Melania Trump.

Karen McDougal, appears to be following in the footsteps of Stormy Daniels — real name Stephanie Clifford — the adult film actress who last month filed a lawsuit seeking to have a California court vacate a contract with the president.

Only in McDougal's case, she is suing American Media Inc., the company that owns the National Enquirer, which she says paid her $150,000 for her story only to suppress it and never publish it "because the owner of AMI, David Pecker, is close personal friends with Mr. Trump," according to the lawsuit.

"AMI lied to me, made empty promises, and repeatedly intimidated and manipulated me," McDougal said in a statement Tuesday.

Like Daniels, McDougal is seeking to have the court declare the contact invalid and no longer be bound to resolve disputes through secretive arbitration. That would also free her to speak publicly about her experiences without fear of financial or legal repercussions.

"I just want the opportunity to set the record straight and move on with my life, free from this company, its executives, and its lawyers," she wrote.

In court documents, McDougal said she carried on an affair with Trump from 2006 to 2007, the same time frame as Clifford. But it wasn't until Trump secured the Republican nomination in 2016 that McDougal signed the contract with AMI.

"Ms. McDougal received $150,000 (nearly half of which went
to the lawyer, who she did not realize was colluding with the other side) and a false promise to jumpstart her career as a health and fitness model," the documents say.

A promise to publish 100 fitness articles by McDougal and put her on two covers went unfulfilled, according to the lawsuit.

McDougal's lawyer, Peter Stris, said that Keith Davidson, the attorney who negotiated with AMI on her behalf, intentionally misled her about the deal and conspired with the news outlets to keep her silent.

"A quarter-billion-dollar company posing as a media organization systematically intimidated and silenced Karen McDougal in order to achieve its political and financial ends, and she will no longer be quiet," Stris said in a statement. "We are confident that the so-called contract will be invalidated and are eager for Ms. McDougal to be able to move forward with her life with the privacy she deserves."

AMI denies the accusations and in a statement issued Tuesday, the company said, "McDougal has been free to respond to press inquiries about her relationship with President Trump since 2016" adding that "the suggestion that AMI 'silenced' her is completely without merit."

It notes AMI has published 20 columns by McDougal and contends the contract gives AMI "the editorial discretion to publish her life story."

"The relationship has produced good journalism and content for our publications," the company said.

"Her lawsuit is the first time AMI has learned of her desire to go a different direction," the statement said. "AMI has a valid contract with Karen and we look forward to reaching an amicable resolution satisfactory to her and to AMI."

In a separate case, a New York Supreme Court judge ruled that there was "absolutely no authority" to dismiss a civil lawsuit by Summer Zervos that claims Trump defamed her when he called her sexual harassment allegations "fabricated and made-up."

As NPR reported, Zervos alleges that in 2007, Trump kissed her on the mouth repeatedly, touched her breast and pressed his genitals against her — all without her consent.

The president has denied the allegations.

Zervos was among several women who stepped forward with stories of assault after the Access Hollywood tape surfaced, in which Trump bragged about grabbing women by the genitals without their permission.

At the time, Trump called their accounts "lies" and "nonsense." He also accused them of being politically motivated — an effort to throw support to his opponent, Hillary Clinton — and by a desire for attention.

Trump's lawyers sought to block the suit, arguing it should be dismissed on the grounds that the president can only be sued through the federal court system.

But Judge Jennifer Schecter determined "a sitting president is not immune from being sued in federal court for unofficial acts." She cited the court precedent leading to Bill Clinton's impeachment in 1998. She also ruled against delaying the case for seven years as Trump's lawyers had hoped.

"We disagree with this decision, which is wrong as a matter of Constitutional law," lawyer Marc Kasowitz told NPR in a statement. "We intend to immediately appeal and will seek a stay of the case until this issue is finally determined," he said.

The ruling Tuesday could mean Trump's presidential campaign may have to release any documents related to more than a dozen women, including Zervos, who have accused Trump of sexual misconduct. Trump and the accusers may also have to face questioning by lawyers about these claims.

Gloria Allred, who is one of Zervos' attorneys, told NPR she is "very happy" with the decision.

CNN announced McDougal will be telling at least some of her story Thursday night. She is scheduled to appear on Anderson Cooper 360.