Accessibility links
WATCH: Robotic Fish Moves Like The Real Thing — So It Can Observe The Real Thing : The Two-Way MIT researchers unveiled a Soft Robotic Fish prototype in hopes of boosting aquatic observation. It can wiggle like a fish, dive to 18 meters, work autonomously — and hopefully avoid getting eaten. 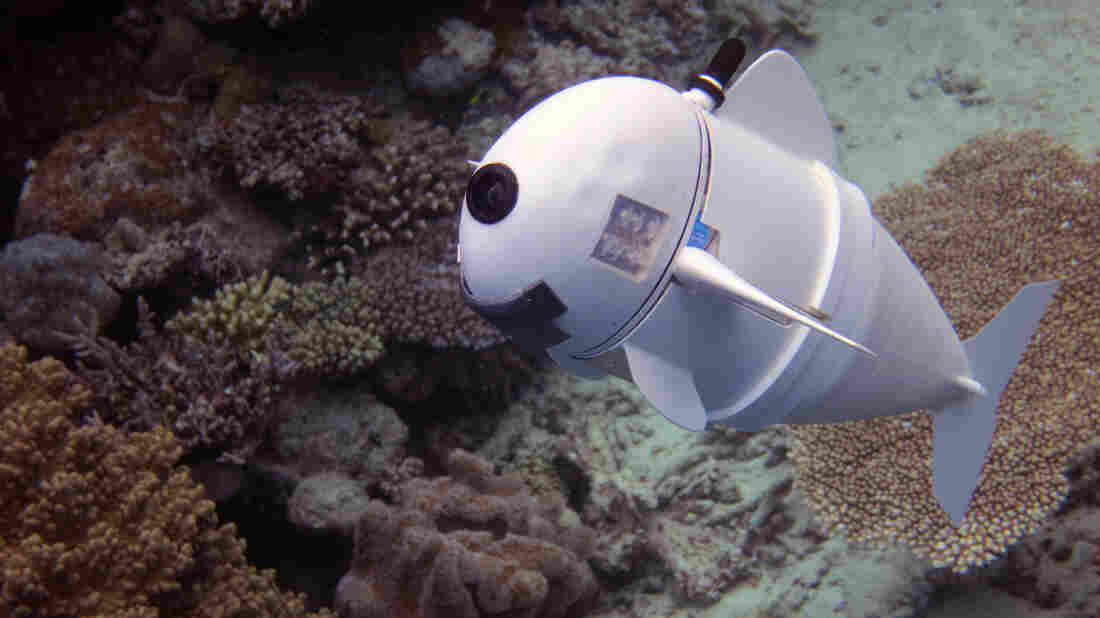 SoFi, the robotic fish, swims in for its close-up. MIT computer scientists hope SoFi will help marine biologists get a closer (and less obtrusive) look at their subjects than ever before. Robert Katzschmann et al. (Photo: Joseph DelPreto)/MIT CSAIL hide caption 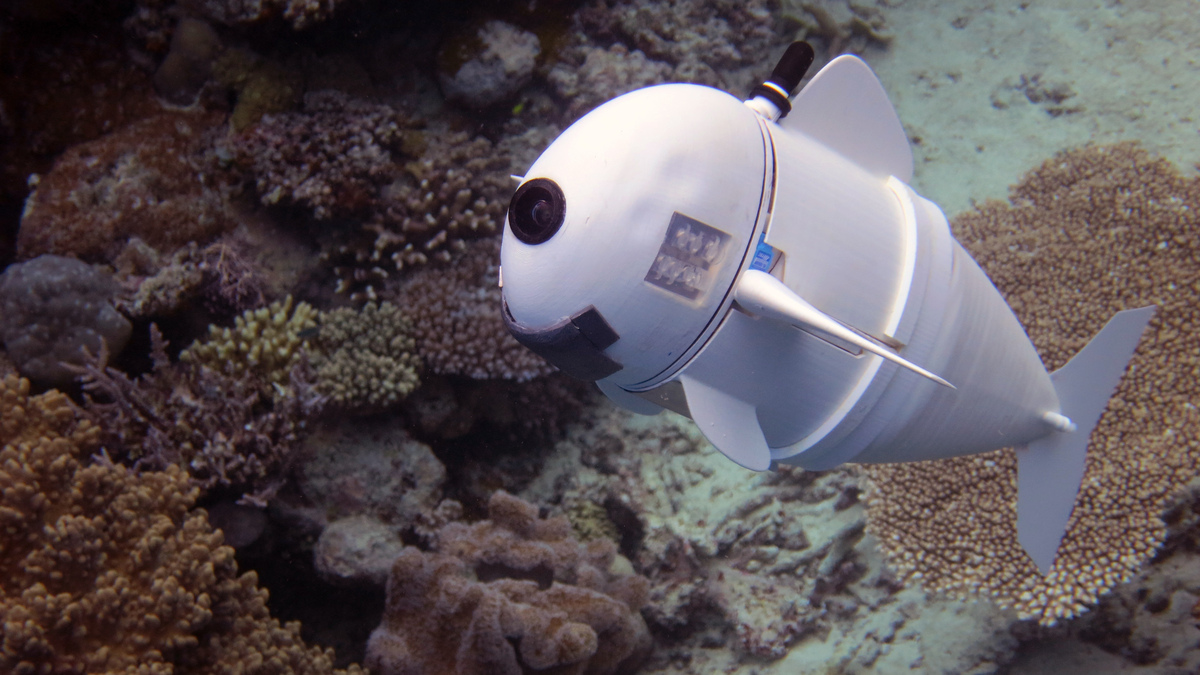 SoFi, the robotic fish, swims in for its close-up. MIT computer scientists hope SoFi will help marine biologists get a closer (and less obtrusive) look at their subjects than ever before.

Scientific advancement: It's all in the wiggle.

OK, it's a lot more complicated than that. But when a team of researchers at MIT unveiled their robotic fish Wednesday, one of the keys they emphasized was the graceful undulation of the prototype's tail — which, besides being rather eye-catching, serves a crucial role in the robot's ultimate mission: giving scientists the ability to unobtrusively observe marine wildlife remotely.

"Because the fish moves through undulating movement rather than thrusters, the impact it has on how the water moves around it is much more like what is expected of physical fish," Daniela Rus, director of the school's Computer Science and Artificial Intelligence Lab, tells NPR.

In other words, unlike many of the vehicles currently used in underwater scientific observation, their Soft Robotic Fish — or SoFi, for short — doesn't rely on propellers or jet-based propulsion. Those methods have the tendency to generate loud noise and turbulence, which, according to the paper Rus and her colleagues released Wednesday, "have the potential to scare marine life and to prevent closeup observations."

Instead, SoFi has a tail built with soft material and powered by soft artificial muscles, allowing it to move in a way that's a little less intrusive and, for that reason, a little more likely to get close to aquatic life acting naturally. With visibility reduced underwater, this could mean its camera has a better chance at snapping some candid shots to pass on to marine biologists.

Watch SoFi in action below.

Now, it must be noted that SoFi is far from the only robotic fish to make a splash, so to speak. The team from MIT notes that other researchers have made initial steps toward soft robots capable of mimicking the behavior of fish, mantas and octopi. And just last month, NPR's Olympics correspondents marveled at the robot fish on display at Pyeongchang.

Even Rus and her colleagues unveiled another autonomous robotic fish prototype back in 2014. That one also had a wiggle that enabled it to "execute an escape maneuver, convulsing its body to change direction in just a fraction of a second, or almost as quickly as a real fish can."

The big deal about this SoFi, Rus says, is that now it can autonomously move up and down on its own, adjusting its buoyancy with a mechanism that pumps water in and out of the tail. Unlike previous iterations, it can dive to 18 meters untethered, while at the same time it can "autonomously execute high-level commands" issued at a distance by its operator, using acoustic signals.

The hope is that, using these abilities, SoFi will eventually become "our version of the 2000 Leagues Under The Sea observatory," Rus says, "and we could really have the fish operate as kind of an underwater webcam or an underwater drone that could be used in marine biology experiments."

To really support those efforts, though, she says the next step is to give the fish a better eye of its own.

"So for instance," she explains, "if the robot is used as an autonomous instrument for underwater observations, the fish should be able to say, 'Oh, that's a parrotfish. Now I have to track a parrotfish.' Or: 'There is a shark. I should follow the shark.'

"Or if it's tasked to find Nemo, it should look for the clownfish around the sea anemones."

Another challenge she says they'll probably have to work on: making sure their own fish doesn't accidentally become fish food: "I was actually quite terrified by this possibility when we first started our experiment, because I could imagine a very hungry shark going up to our fish," she says, noting one question sure to linger.

"Can the sea creatures differentiate that robot from dessert?"