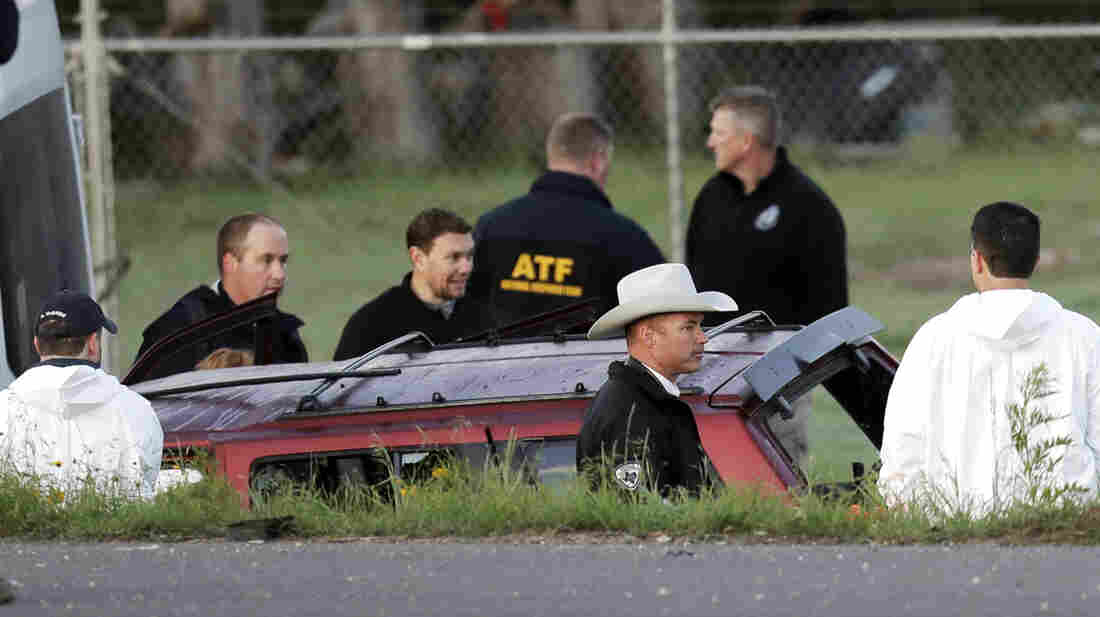 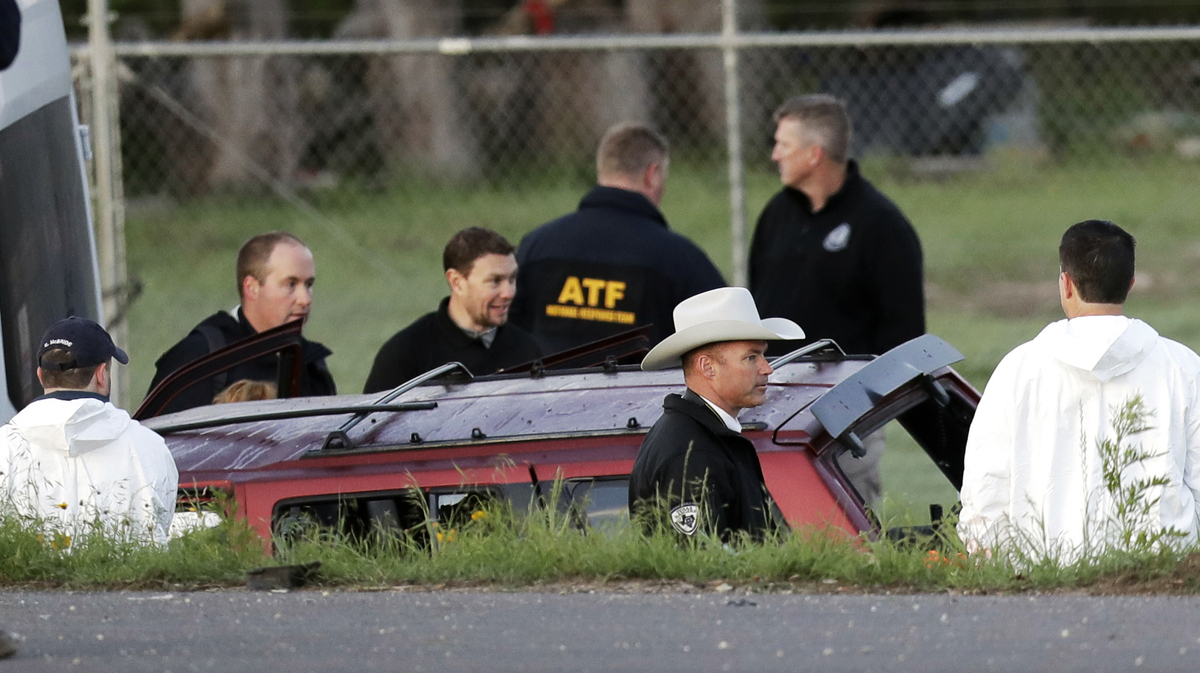 Officials investigate the scene where suspect Mark Anthony Conditt died in an explosion early Wednesday. His red vehicle was trapped between two white vans in Round Rock, Texas.

The man police had identified as their top suspect in a string of deadly bombings in the Austin, Texas, area made a cellphone recording describing seven bombs he said he had constructed. Investigators discovered the message after the suspect killed himself early Wednesday by triggering an explosion in his car as officers approached the vehicle to make an arrest, police said Wednesday.

Officials identified him as 23-year-old Mark Anthony Conditt, from Pflugerville, Texas, outside Austin.

"I would classify this as a confession," said Manley, adding that the recording contained details of the six bombs the suspect said he had constructed, identifying their differences. They were the bombs that inspired fear across the region and mobilized a massive law enforcement operation.

Manley said the recording does not provide a certain motivation for the bombings.

The police chief asked Austin-area residents to remain vigilant, but he also offered some reassurance.

"But I also want to let the community know that he described seven explosive devices and we have identified, and no longer in play, those seven devices," Manley said.

Hours after Condit died, the situation remained fluid as Pflugerville's downtown was evacuated. The Associated Press reports that police cleared the area as investigators conducted a search of Conditt's home, where an FBI special operations team clad in body armor found further components for homemade explosives.

Police say the equipment was similar to what they found in the devices that killed two people and injured four more over a three-week span.

Pflugerville Mayor Victor Gonzales asked residents to remain vigilant. "What may seem suspicious to you could be an important detail to help in this investigation," Gonzales said in a video message.

Austin Police announced that investigators had detained two roommates of the bombing suspect. One was released, while the other was still being questioned. They were not named, as police said, "they are not under arrest at this time."

APD Chief Manley says they don’t yet have a motive for the #Austinbombings.

Earlier Wednesday, police identified Conditt only as a 24-year-old white male. In a later statement, officials clarified that he was 23. Austin Police Chief Brian Manley waited for positive identification and notification of next of kin before making an official announcement.

The U.S. attorney in the Western District of Texas released a criminal complaint and arrest warrant on Wednesday accusing Conditt of receiving, possessing and transferring a destructive device. The documents were filed Tuesday evening, hours before officials say Conditt killed himself.

From 'Unabomber' To 'Mad Bomber,' A Look At Past Serial Bombers

Identifying and locating Conditt was the result of "hundreds of federal, state and local law enforcement officers" working together, U.S. Attorney John F. Bash said in a statement.

A photo of Conditt that was posted five years ago on a Facebook profile that seems to belong to his mother, Danene, shows a smiling young man.

"I officially graduated Mark from High School on Friday," she wrote of the home-schooled student.

"We are devastated and broken at the news that our family member could be involved in such an awful way," Conditt's family said in a statement released Wednesday.

"We had no idea of the darkness that Mark must have been in. Our family is a normal family in every way," the statement continued. "We love, and we pray and, we try to inspire and serve others. Right now our prayers are for those families who have lost loved ones, for those impacted in any way, and for the soul of our Mark."

Conditt died in the Round Rock community of Greater Austin, north of where the first bomb struck on March 2. Anthony House, 39, died in that explosion, setting off fear, warnings to the public and a police search for who was sending deadly packages.

"Beginning within the past 24-36 hours we began to get information of one person of interest that moved to a suspect," Manley told reporters, standing in the early morning darkness along Interstate 35 north of Austin on Wednesday. He spoke near the spot where Conditt, believed to be responsible for two deaths and several injuries, had died hours earlier.

"Late last night and this morning, we felt very comfortable that he was the suspect," Manley said. He said the man had been identified with the help of leads from "video sources, as well as by witnesses."

Conditt had been traced to a hotel parking lot in Round Rock after the vehicle he was known to be driving was located. Police and federal agents soon swarmed around the hotel — where they waited for tactical backup, in the form of armored vehicles that might help them take the suspect into custody "as safely as possible," Manley told reporters.

"While we were waiting for those vehicles to get here, much time had passed, and the vehicle started to drive away," Manley said. "We began following the vehicle, again waiting to get the tactical vehicles here so we could make a stop."

That's when Conditt's vehicle stopped in a ditch on the side of the busy road.

"This is the culmination of three very long weeks for our community," Manley said in reference to the first bomb on March 2 and six others that followed.

President Trump comments on news this morning that a suspect in the #AustinBombings has been killed in a standoff with police.https://t.co/OR9sIyrbw6 https://t.co/sNXnLlPqwj

Manley also warned that the public should remain vigilant and cautious, in case the bomber had been able to deploy any final explosive devices because, as he said, "we don't know where this subject has spent his last 24 hours."

Manley said that Conditt's name had come up during the investigation and that "we became very interested in him over the past couple of days." Police are still not sure why the man would have become a serial bomber.

"That's the one thing we don't have right now, is a motive behind this. We do not understand what motivated him to do what he did."

Austin Mayor Steve Adler says he was contacted and kept updated as the events were unfolding.

"It's been an absolute relief" to have a potential end to the case, Adler said. "As these incidents have been occurring with increasing frequency, the anxiety and fear in the community has been growing. So it was good to be closing in over the last day or so — and to have this resolution." 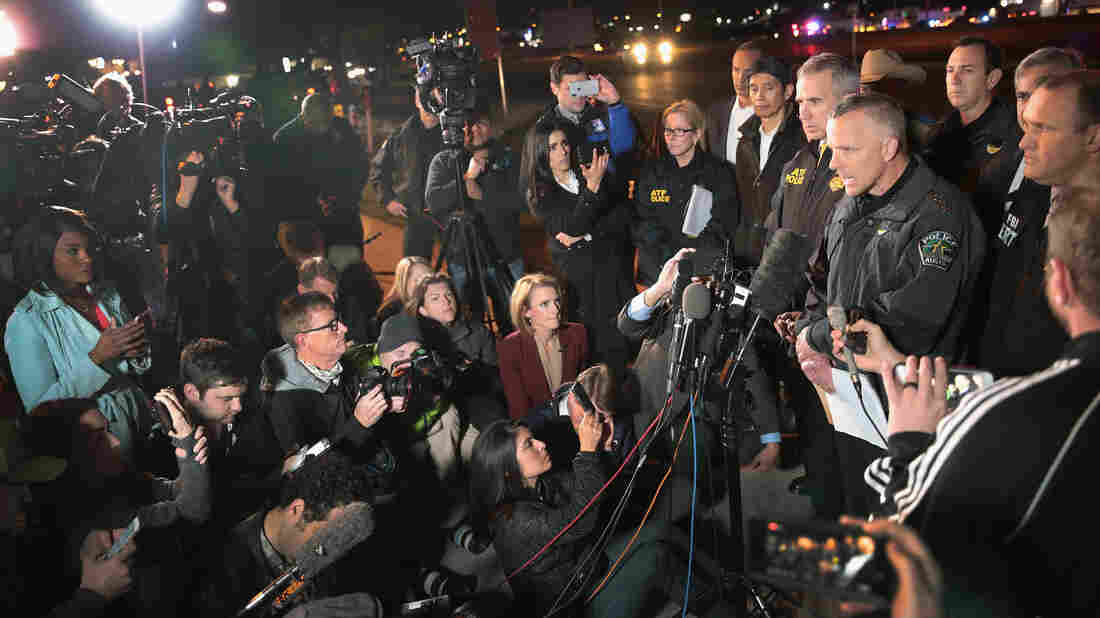 "The suspect is deceased and has significant injuries from a blast that occurred from detonating a bomb inside his vehicle," Austin Police Chief Brian Manley told journalists near the location where the suspected package bomber died in Round Rock, Texas, in suburban Austin on Wednesday. Scott Olson/Getty Images hide caption "The suspect is deceased and has significant injuries from a blast that occurred from detonating a bomb inside his vehicle," Austin Police Chief Brian Manley told journalists near the location where the suspected package bomber died in Round Rock, Texas, in suburban Austin on Wednesday.

President Trump welcomed the news, saying in a tweet, "AUSTIN BOMBING SUSPECT IS DEAD. Great job by law enforcement and all concerned! "

The confrontation early Wednesday came after police dealt with two more package bombs found on Tuesday at separate FedEx facilities near San Antonio and the one in Southwest Austin. They are the latest of six such devices this month that the FBI and other agencies say are connected.

An explosion that was reported at a Goodwill store in south Austin initially caused alarm that it may have been related, but as member station KUT reports, "Austin Assistant Chief of Police Ely Reyes said the device was an 'artillery simulator' – an old military memento. He said it was not related to the serial bombings."

Citing an unnamed high-ranking law enforcement official, The Austin Statesman reports that police used security video from a FedEx store in Southwest Austin where a bomb had been shipped earlier to identify a suspect.

The newspaper says authorities used "store receipts showing suspicious transactions from the person and obtained a search warrant for his Google search history that showed him conducting searches they considered suspicious."

The suspect died roughly 24 hours after a nighttime blast on Tuesday, when a package detonated at a FedEx Ground facility in Schertz, Texas, northeast of San Antonio. One person was treated and released in that package bomb incident.

"It was mailed from Austin, and it was mailed back to Austin" going through the FedEx center in Schertz, state Attorney General Ken Paxton told KXAN-TV news.

The package had been addressed to an Austin resident, Paxton said.

A second, unexploded package was found hours later on Tuesday, at another FedEx facility. It had apparently been shipped by the same person.

In a statement late Tuesday, the Austin Police Department, the FBI and the Bureau of Alcohol, Tobacco, Firearms and Explosives said:

"[At] approximately 6:19 a.m., APD received a call regarding a suspicious package at 4117 McKinney Falls Parkway in Austin. APD, along with the FBI and the ATF, responded. It was determined the package contained an explosive device and was disrupted by law enforcement. No injuries were reported."

Officials believed the package that exploded may have come from an address on Brodie Lane that houses a FedEx Office printing and shipping office, part of the large Sunset Valley Shopping Center, southwest of downtown Austin, the Sunset Valley Police Department said.

"There is an army of law enforcement folks that are here," Adler told NPR's David Greene about the effort to end the bombing threat. "Hundreds of federal agents, multiple federal agencies, hundreds of agents working on this outside of Austin and Texas."

The investigation into the Schertz blast was slowed by the need to ensure the FedEx facility was safe, FBI Assistant Special Agent in Charge James Smith said at a midmorning update. Many of those same concerns played into the delay in approaching the suspect Tuesday night.

A blast along a sidewalk on Sunday had been triggered by a tripwire — indicating that the culprit was likely more sophisticated than investigators had first realized. One day later, police said they believed the bombings were all connected and said they believed they were dealing with a "serial bomber."

The bombing scare had set Austin on edge for weeks now. Adler also said that he realized something through visiting communities during the ordeal:

"We don't know the neighbors around us as well as we should. And my hope is that one of the legacies of this moment is that we all walk across the street — or down the street or across the hall — and get to know the people around us in ways we don't now."