Accessibility links
Israel Acknowledges Having Bombed A Suspected Syrian Nuclear Reactor In 2007 : The Two-Way The revelation confirms long-held suspicions that the raid destroyed what Israel believed to be a nuclear reactor. Israeli officials made clear they intend this announcement to send a message to Iran.

Israel Acknowledges Having Bombed A Suspected Syrian Nuclear Reactor In 2007

Israel Acknowledges Having Bombed A Suspected Syrian Nuclear Reactor In 2007 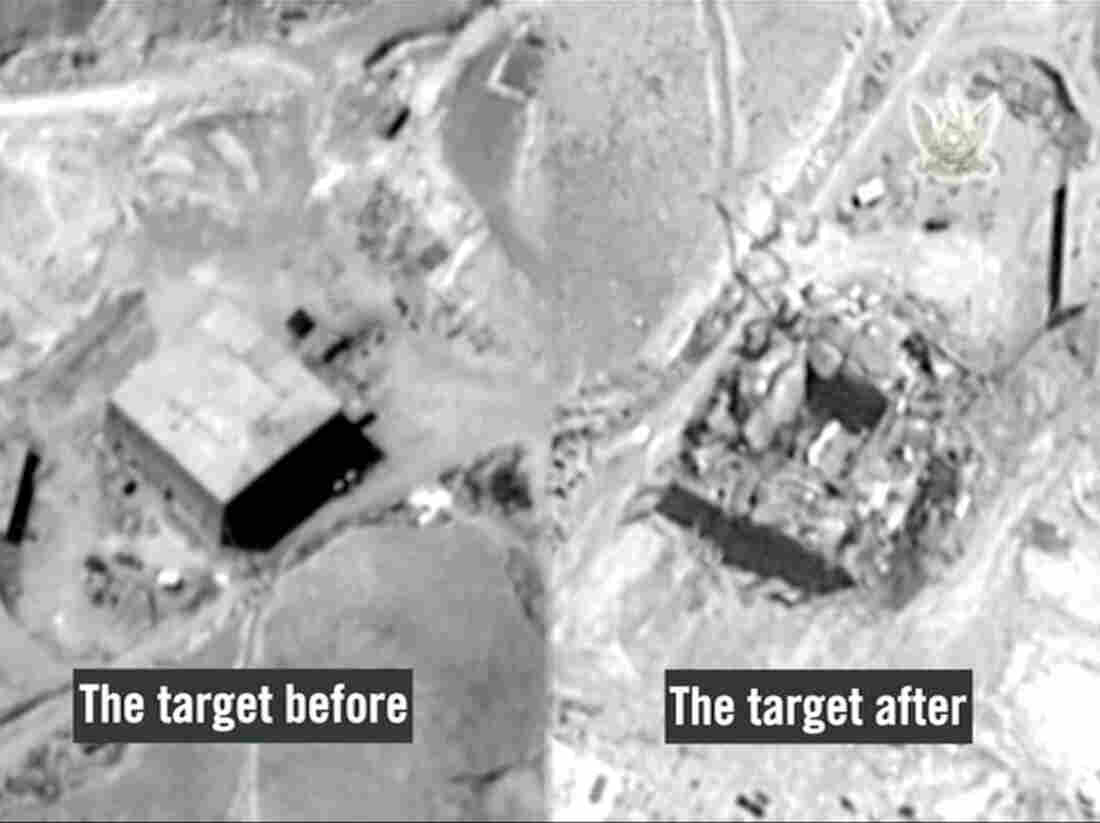 This image, which is excerpted from a video released Wednesday, shows what the Israeli military says was a suspected Syrian nuclear reactor site near Deir al-Zor, photographed before and after an Israeli airstrike in September 2007. IDF/Handout via Reuters TV hide caption 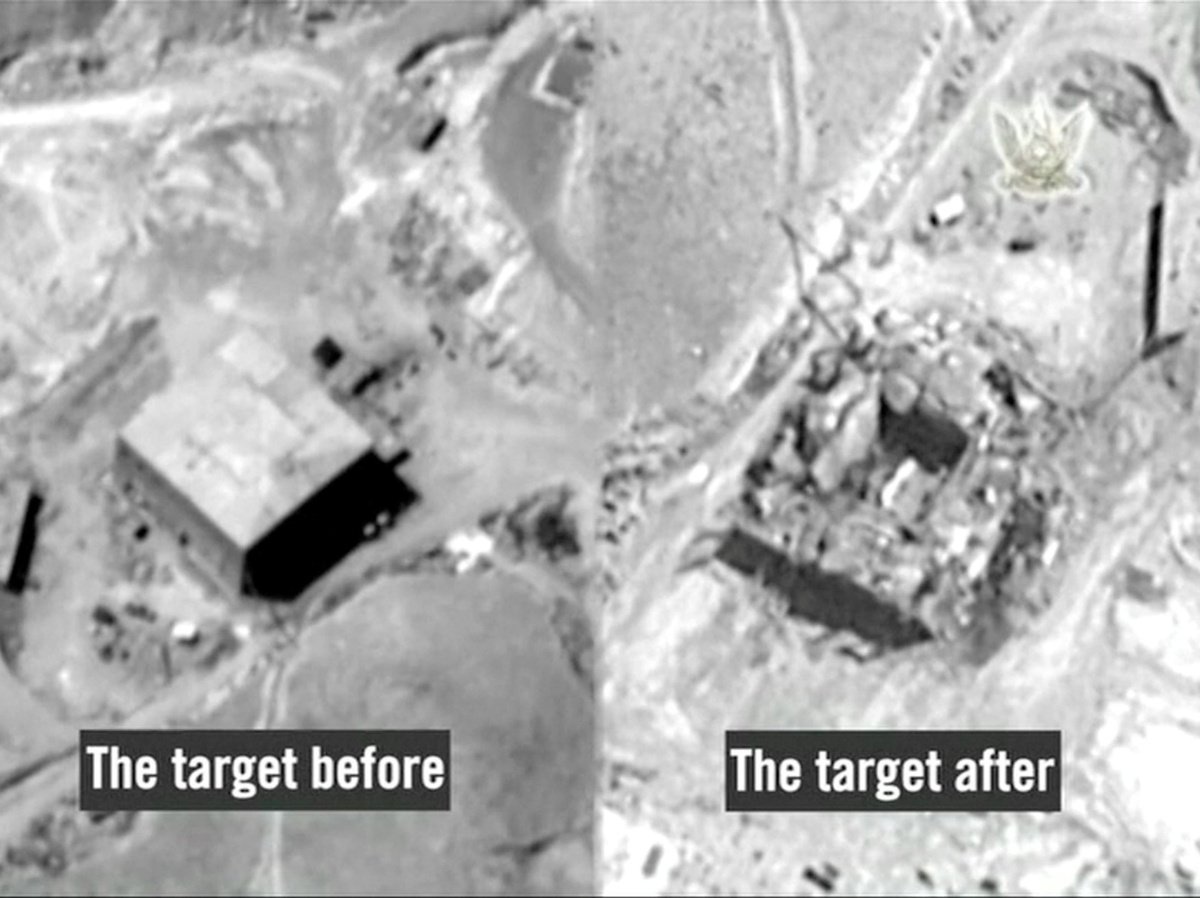 This image, which is excerpted from a video released Wednesday, shows what the Israeli military says was a suspected Syrian nuclear reactor site near Deir al-Zor, photographed before and after an Israeli airstrike in September 2007.

After more than a decade of silence, the Israeli Defense Forces confirmed Wednesday that an Israeli airstrike destroyed a suspected nuclear reactor under construction in Syria in 2007.

It was in the dark, early hours of Sept. 6, near Deir ez-Zor, that "four F-16 jets eliminated a nuclear threat not only to Israel, but to the entire region," the IDF said in a statement.

"For two years, officials in the Military Intelligence Directorate had been monitoring the Syrian nuclear project," the Israeli military continued. "Their intelligence suggested that the facility would become active toward the end of 2007, which prompted the IDF to initiate an attack on the facility."

The IDF also released video of what it says was the airstrike that leveled the building.

The announcement confirms years of suspicion that Israel had attacked the site in the belief it was a reactor in the making. Those claims surfaced just days after the raid, and just one month later, American media, including NPR, were discussing the likelihood the target was the beginnings of a nuclear reactor, possibly of North Korean design.

The International Atomic Energy Agency, the nuclear watchdog for the United Nations, concluded in 2011 that the site was "very likely" a reactor being built with North Korean help. And a year earlier, as noted in a 2010 story published in The Seattle Times, former President George W. Bush even described the discussions surrounding the operation in his memoir, Decision Points.

"Former President George W. Bush confirms in his memoir that the target of a 2007 Israeli airstrike was a Syrian nuclear reactor and suggests he quietly approved," the story noted, adding: "Bush said the raid showed the Jewish state would go it alone and revealed that Israel first asked the U.S. to bomb the site."

The Syrian government has long denied the site was intended to be a nuclear reactor, and Reuters reports that Israeli media chafed under a military mandate to remain silent about the details of the operation. Syria did not retaliate militarily, though the attack steeply escalated tensions between the two countries.

On Wednesday, when they broke their long silence, Israeli officials made clear they intended this announcement to warn another country in particular: Iran.

"The courageous decision of the Israeli government almost 11 years ago to destroy the nuclear reactor in Syria and the successful operation following it sends a clear message: Israel will never allow nuclear weapons to countries like Iran who threaten its existence," Israeli Intelligence Minister Yisrael Katz tweeted.

"The Israeli government, the Israel Defense Forces and the Mossad prevented Syria from developing nuclear capability," Prime Minister Benjamin Netanyahu said soon afterward. "They are worthy of full praise for this. Israel's policy was and remains consistent — to prevent our enemies from arming themselves with nuclear weapons."

The announcement comes at a time when the Iran nuclear deal appears highly vulnerable to U.S. withdrawal. President Trump, who has echoed Netanyahu's criticisms of the deal since he was on the campaign trail, recently dismissed Secretary of State Rex Tillerson, citing Tillerson's defense of the deal as one of their principal disagreements.

The man nominated to replace Tillerson, CIA chief Mike Pompeo, has been an outspoken critic of the deal.