Accessibility links
Les Payne, Pulitzer Prize-Winner And NABJ Founder, Dies At 76 : The Two-Way He committed himself to improving conditions for African Americans saying "I saw myself as a kind of lead pipe in the hands of people who did not otherwise have a weapon to counter such things." 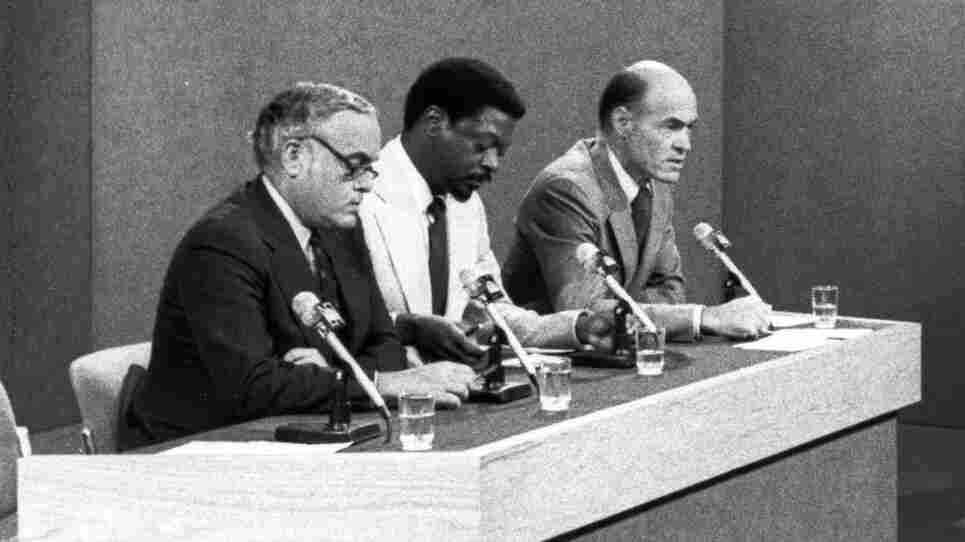 "My career defining moment would be covering South Africa," said Les Payne, center, seen here as part of a Meet the Press panel during his time at Newsday. NBC/NBCU Photo Bank via Getty Images hide caption 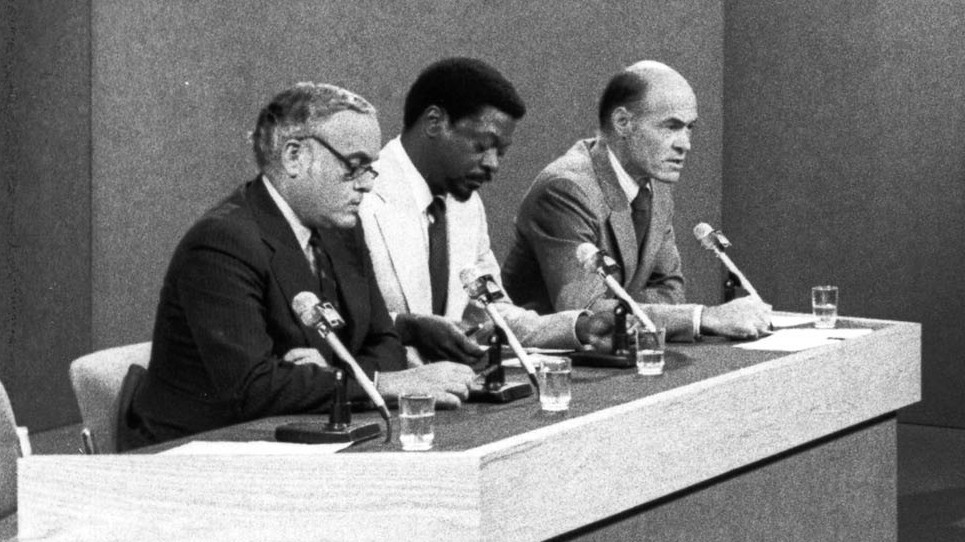 "My career defining moment would be covering South Africa," said Les Payne, center, seen here as part of a Meet the Press panel during his time at Newsday.

Les Payne, a Pulitzer Prize-winning journalist who spent his career at Newsday expanding coverage beyond local issues to include international stories first as a reporter, then as a columnist and editor — all while vehemently crusading for racial equality — has died at his home in Harlem, N.Y. He was 76.

Payne's son Jamal told Newsday that the retired journalist was working on a book about Malcom X when he had a heart attack in his home office Monday evening.

Over nearly four decades, Payne, who was born in the Jim Crow South, proudly talked about his career in journalism as a calling — and a mandate to bring about social change.

"Being born in Alabama under an apartheid system," he said in an interview with Newsday, "my whole life — in my professional life and career — has been about improving conditions for African Americans in this country."

Payne's aim was to always be provocative, he said: "I saw myself as a kind of lead pipe in the hands of people who did not otherwise have a weapon to counter such things."

And he was revered for his ability to wield that weapon effectively.

"When he walked into a room, you knew he was going to bring the fire," Vanessa Williams told NPR.

Williams is a staff writer at The Washington Post who also served as president of the National Association of Black Journalists (NABJ), an organization Payne co-founded and later led.

"For someone who worked in a newsroom where there weren't a lot of black journalists, it was inspiring to be in the same organization with someone like him," she said.

As an investigative reporter, Payne went undercover for a week working alongside migrant potato farm laborers on Long Island, chronicling their "their despairs, laughs and loves and cries."

In a story about biased housing policies in Long Island during the 1970s, Payne described the look on his landlady's face when she realized she'd rented an apartment to a black man: "When she opened the door I saw the look that I have seen often on the face of my white countrymen. It was the look of rejection, hatred, scorn, dread, contempt, pale ire, even fear. There was no mistaking it."

But it was a 33-part series called "The Heroin Trail," tracing how heroin produced from poppies cultivated in Turkey eventually found its way onto the streets of Long Island, that won Payne and two other reporters a Pulitzer for public service, in 1974.

It was a sprawling and audacious undertaking for the paper as it was moving into foreign coverage, making a direct connection between U.S. foreign policy and aid to the 25 heroin overdose victims who died that year in the same community the paper covered.

Despite the prestigious accolade, it was another story that became a turning point for Payne. "My career defining moment would be covering South Africa," he said in the Newsday interview.

Because of his childhood experiences in Alabama, Payne said, "I knew about segregation. I knew a good deal about racism. But that kind of brutal, barbarian kind of racism was an eye-opener even for me."

The series documented the killings by the apartheid government during the Soweto uprising and found they had been vastly under-reported. Officials admitted to killing 250 students, but Payne determined 850 had been slain in the upheaval.

"He always said, 'You have to count the bodies,' " Nick Charles, a former colleague of Payne's, told NPR.

In that instance, Charles said, Payne found sources within a handful of black-led community groups who would not confirm the number of dead — but they did allow Payne to actually count the embalmed bodies.

The Soweto stories technically earned Payne another Pulitzer for international reporting. But in an unusual move, the advisory board overturned the jury's selection without explanation, handing it over to the fourth place finalist. It would have been Payne's second Pulitzer, which at the time was unprecedented for any reporter.

Payne was born in Tuscaloosa, Ala., but he moved to Connecticut with his mother when she remarried. He finished high school two years early and graduated from the University of Connecticut in 1964 with a bachelor's degree in English. He entered the U.S. Army immediately afterward, and over six years rose through the ranks to captain during the Vietnam War, even writing speeches for Gen. William C. Westmoreland, according to The New York Times.

Payne's career at Newsday spanned from 1969 to 2006, serving as associate managing editor by the end. He oversaw foreign and national coverage, including several Pulitzer nominated series, and became editor of New York Newsday while also writing a column. He retired in 2006.

As he transitioned from reporter to columnist, Payne said, he decided that he "wanted to write a provocative column that would describe and find racism on Long Island."

"You looked up to him and wanted to be him — but you also got the sense that it was really hard being him," Charles said of Payne, whom he described as a renaissance man who didn't suffer fools. Still, he maintained an open-door policy for any young journalist seeking advice.

Charles notes that NABJ was intended to provide camaraderie for black journalists who were often the lone minority reporters in newsrooms.

In 2017, Payne was inducted into the Deadline Club's Hall of Fame.

"Les is a champion of strong journalism and we were fortunate to have him as our leader at Newsday for many years. His passion for uncovering the truth no matter how difficult is an inspiration to us all," Newsday co-publisher Debby Krenek said at the time.

Payne is survived by his wife, Violet, sons Jamal and Haile, and daughter Tamara.

"He appreciated the people who appreciated him: the readers. They were the ones that he enjoyed writing for, and I appreciate them reading him," Violet, told Newsday.