Accessibility links
Former 'Playboy' Model Spills Details Of Alleged Affair: Trump 'Tried To Pay Me' : The Two-Way Karen McDougal speaks out for the first time about a 10-month affair she says she had with Donald Trump, who was married. She says he tried to hand her cash after their first intimate encounter. 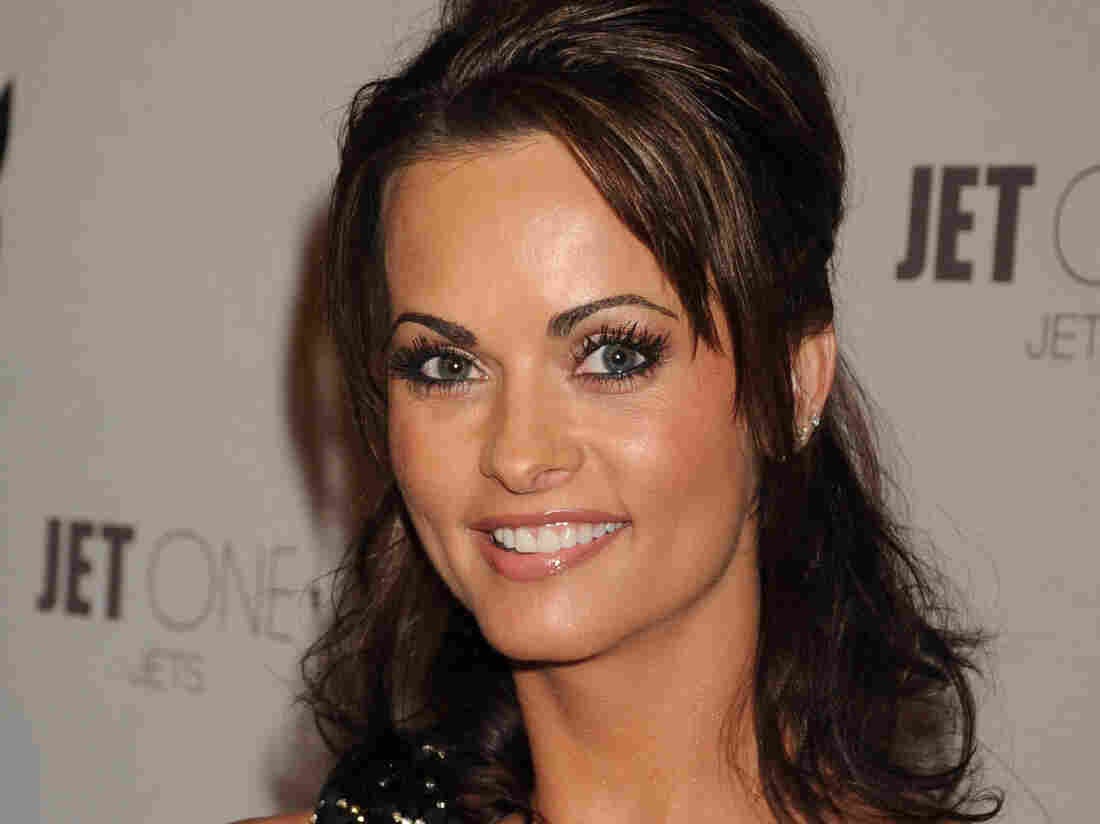 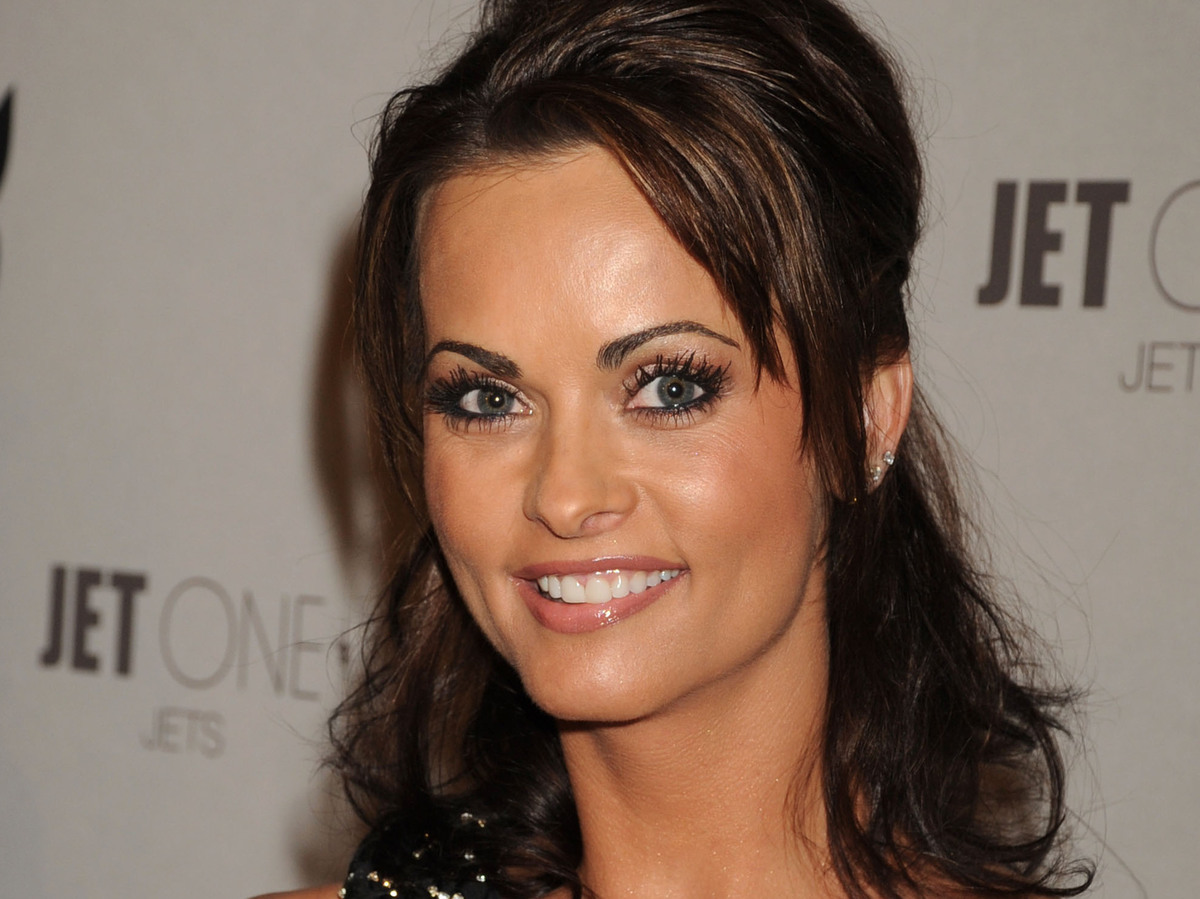 The former Playboy model who is suing for the right to talk about her alleged affair with Donald Trump, before he was president, is not waiting for a court or judge to free her from a contract she says was contrived for the sole purpose of killing the story of the 10-month relationship.

In an interview with CNN's Anderson Cooper on Thursday evening, Karen McDougal said Trump tried to pay her after the first time they had sexual relations.

"After we had been intimate, he tried to pay me, and I actually didn't know how to take that," she said, clasping her hands together.

She recalled how the cash offer left her shaken while Trump appeared surprised by her reaction. "The look on my face must have been so sad," she said. She wondered, "Does he think I'm in this for money? That's not me."

"I'm not that kind of girl," she said she told him.

His response: "You're really special."

"After we had been intimate, he tried to pay me." Former Playboy model Karen McDougal shares details of an alleged affair she had with Donald Trump. Her full interview with Anderson Cooper airs on @AC360 at 8p ET. https://t.co/22EFN2PtPt pic.twitter.com/NizYM1iYX5

McDougal recounted the specifics of the alleged affair. She first met Trump at the Playboy Mansion when he was filming an episode of Celebrity Apprentice. He said "hello" and seemed immediately smitten by the striking brunette, who bears more than a passing resemblance to his new wife at the time, Melania. He was direct in asking for her number and called "right away." Over the next few days, they talked on the phone. She said she had many of Trump's private phone numbers, including those of his bodyguard and his assistant.

When asked what attracted her to Trump, she ticked off a list: He is a nice-looking man; he is sweet, funny, very charismatic; and his personality is "wow!"

Their first "date," she said gesturing with air quotes, took place at the Beverly Hilton Hotel on June 12, 2006, two days before Trump's 60th birthday. She thought they were meeting for dinner in the tony hotel restaurant, but instead, Trump's bodyguard ushered her into the reality star's usual bungalow.

"I was concerned," McDougal confided to Cooper and the audience at large. "At that moment, I realized maybe something else is going on."

After some conversation, they had unprotected sex, she said.

According to McDougal, Trump said, "I don't like these things." It's unclear whether she meant condoms or another form of contraception.

That set a precedent for their future sexual encounters, of which she said there were "many dozens." From June 2006 through April 2007, she said, "We saw each other a minimum of five times a month up to bigger numbers," and each meeting involved some type of sexual intimacy.

Throughout their relationship, Trump arranged their trysts, asking her to meet him all over the country in private and in public, she said. Mostly he would fly her out to meet him and put her up for the length of her stay, but he occasionally had her book her own travel and pay for herself, with the understanding that he would reimburse her later.

That way there would be "no paper trail," she said.

She told Cooper that Trump didn't seem to care whether people saw them together and didn't seem conflicted about cheating on his wife. She said she visited him at his New Jersey home. Once, she said, he even took her to the apartment in Trump Tower where he lived with his wife and their young son, Barron.

"Aren't you afraid to bring me here?"

He showed her around the "very gold" apartment and pointed out Melania's room, saying, "She likes to get away to read."

It was moments like this, McDougal said, that filled her with guilt and dread over the extramarital affair.

Even worse was actually meeting Melania and posing for a picture with her, Trump and a handful of McDougal's Playboy Playmate colleagues, she said. McDougal conceded it is possible Melania knew about the Playmate's dalliance with Trump.

Still, she said she was very happy throughout the romance. She said that she loved Trump and that he loved her. He told her so "all the time" and had several pet names for her, including "baby" and "beautiful Karen."

One of her memories involves Trump favorably comparing her to his daughter Ivanka.

"He said I was beautiful like her," she told Cooper.

Throughout the relationship, McDougal kept a journal recording her encounters with Trump. She said her sister and a handful of friends knew of their liaison. But, she told Cooper, she did not keep any texts, photos or messages documenting their relationship.

At one point, Trump said he was remodeling an apartment as a Christmas gift for McDougal, she said. But she never saw it.

McDougal said she was not aware that Trump allegedly had other paramours while they were involved, including adult film actress Stormy Daniels, who says she also had a fling with Trump. Stormy, whose real name is Stephanie Clifford, is also suing to be able to tell her story.

"I thought I was the only one," McDougal said, adding that "it makes sense. If he's doing it behind his wife's back, why would he not do it behind my back?"

In the end, McDougal said, she was overwhelmed by guilt and fear that the affair would become public. That feeling is what ultimately led her to end it, the same way it started, over the phone, she said.

"The excitement took over for a while, but I started feeling so bad about myself. ... It was tearing me apart in the long run. I knew I needed to get out," she said.

McDougal delved into the lawsuit filed in a California court earlier this week that asks for her release from a contract she signed with American Media Inc. for her life rights.

Shortly after Trump won the Republican nomination, the model turned aspiring journalist promised to keep quiet about the supposed romance with Trump in exchange for $150,000 and a deal to write articles for some of the company's magazines and appear on at least two covers.

She explained to Cooper that she was happy to take the hush money. In fact, she said she was relieved that the story of the illicit affair would be buried and also thrilled about the opportunity to rebrand herself from former Playmate to lifestyle and fitness model.

She said AMI and its owner, David Pecker, in particular, framed the deal as a means to "jump-start" her career and protect her image as "wholesome and pure."

At the time, she thought, "It's a win-win for me. I get the work, and my story doesn't have to come out."

Additionally, she felt a deep sense of loyalty to Trump both as a former lover and as a Republican.

But things didn't pan out the way she had anticipated. The company and Pecker, who is a longtime friend of Trump's, failed to hold up their end of the bargain, according to McDougal. And now she wants out of the contract.

"I almost feel violated. I feel taken advantage of," she told Cooper. "I feel like the contract was illegal, I was lied to, and I want to share my truth."

"I want my life rights back," she said.

As NPR reported, AMI denies the accusations, and in a statement issued Tuesday, the company said, "McDougal has been free to respond to press inquiries about her relationship with President Trump since 2016," adding that "the suggestion that AMI 'silenced' her is completely without merit."

Still, McDougal said she fears financial ruin and hopes a legal judgment in her favor will release her from the deal with AMI. She has even offered to pay back the money she took.

She also offered an apology to Melania. "I'm sorry," she said choking back tears. "I wouldn't want it done to me."

"I know it's a wrong thing to do, but in those days, I was a different girl. I had fun. I was in the Playboy scene," she explained.

In the years since her entanglement with Trump, she has returned to her roots and faith. "I'm going to church. I'm involved in ministry," she said.

Trump has not commented on any of McDougal's claims, but the White House has denied the affair.

"I think somebody is lying, but I can tell you it's not me," she said.