Accessibility links
Navy Admits To 70-Year Crew List Error In USS Indianapolis Disaster : The Two-Way Petty Officer Clarence Donnor was mistakenly listed as a passenger on the ill-fated ship before it embarked on a secret mission and was later sunk by a Japanese submarine. 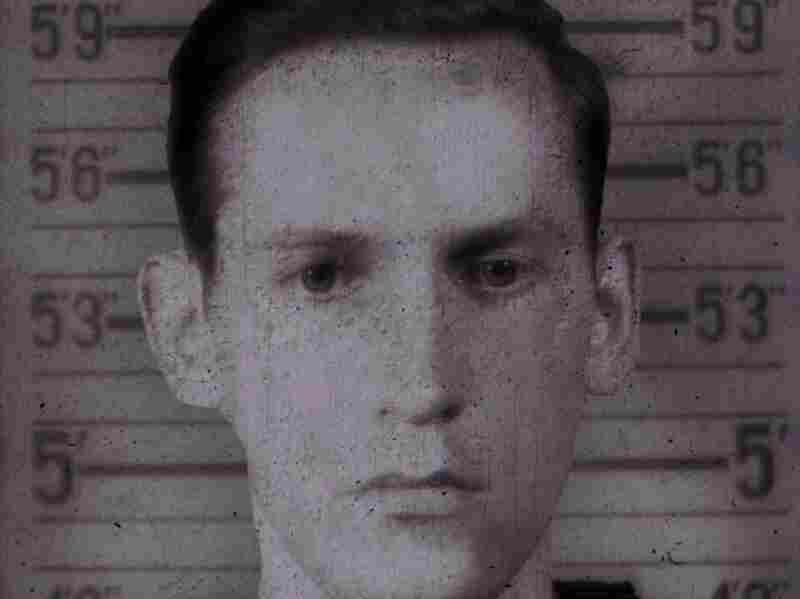 Clarence Donnor who was mistakenly believed to have been aboard USS Indianapolis when it was sunk by a Japanese submarine in July 1945. U.S. Navy photo hide caption 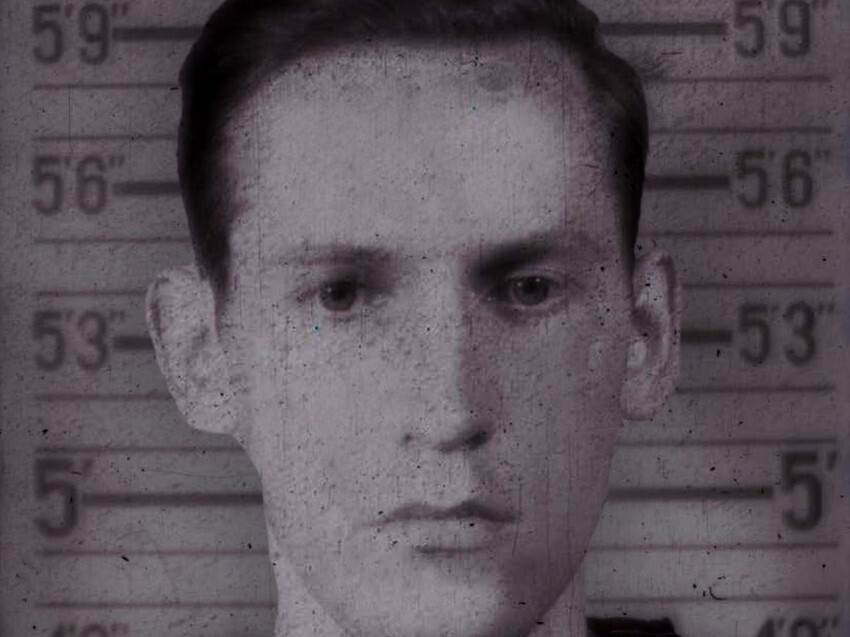 Clarence Donnor who was mistakenly believed to have been aboard USS Indianapolis when it was sunk by a Japanese submarine in July 1945.

On Aug. 12, 1945, days after atomic bombs were dropped on Japan, the Donnors received an official telegram at their home in Big Rapids, Mich. Their son, U.S. Navy Radio Technician 2nd Class Clarence Donnor was missing in action, it said.

Although they did not know it at the time, Donnor had been listed aboard the USS Indianapolis, which had been sunk by a Japanese submarine in the Philippine Sea on July 30, resulting in the largest loss of life at sea in U.S. Navy history.

Indianapolis sank in less than 15 minutes, with some 300 sailors and Marines going down with the ship. With few lifeboats, many of the remaining faced death by exposure or shark attack until being rescued days later.

Donnor, however, was nowhere near the disaster playing out in the Pacific. His assignment to the Indianapolis had been canceled moments before the ship deployed on a secret mission to deliver atomic bomb components to the island of Tinian, the airstrip used to launch the attacks on Hiroshima and Nagasaki. Instead, he had received orders to report for officer training at Fort Schuyler, N.Y. 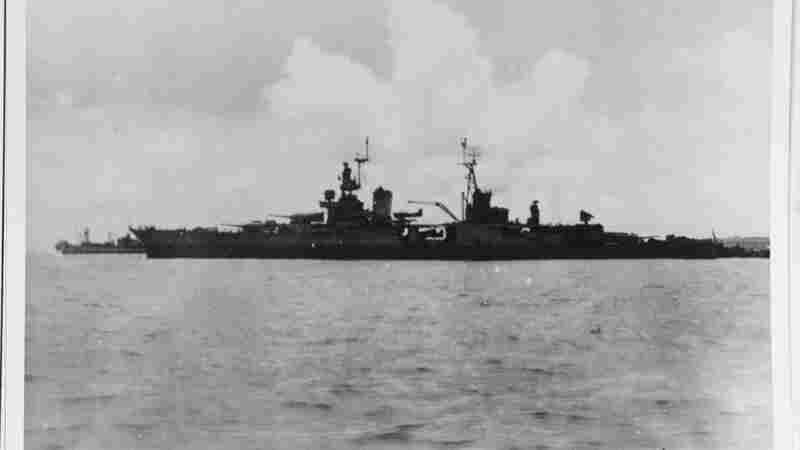 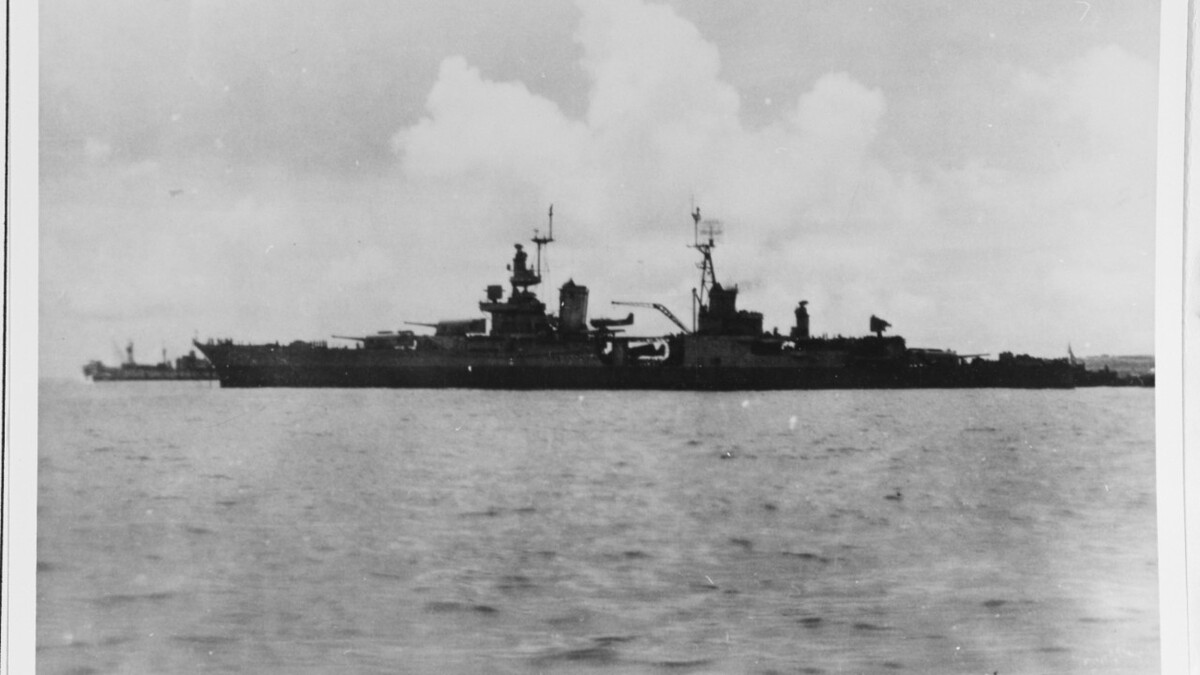 As researchers Richard Hulver and Sara Vladic explain in a paper published by the Naval History and Heritage Command, the next day, Donnor's mother, Ruth, sent a letter to the chief of naval personnel to apprise him of the mistake. "We are pleased to inform you that we have talked with our son since that date [when he was declared missing on 30 July] and also had a postal card and letter. He is now en route to a naval school in New York," she wrote. 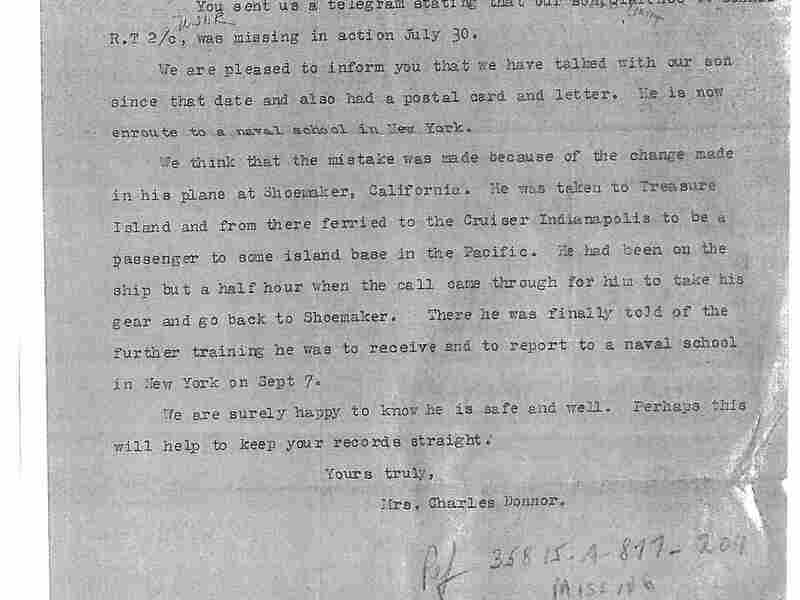 A copy of a letter from the mother of RT2c Clarence W. Donnor to the Chief of Naval Personnel. U.S. Navy hide caption 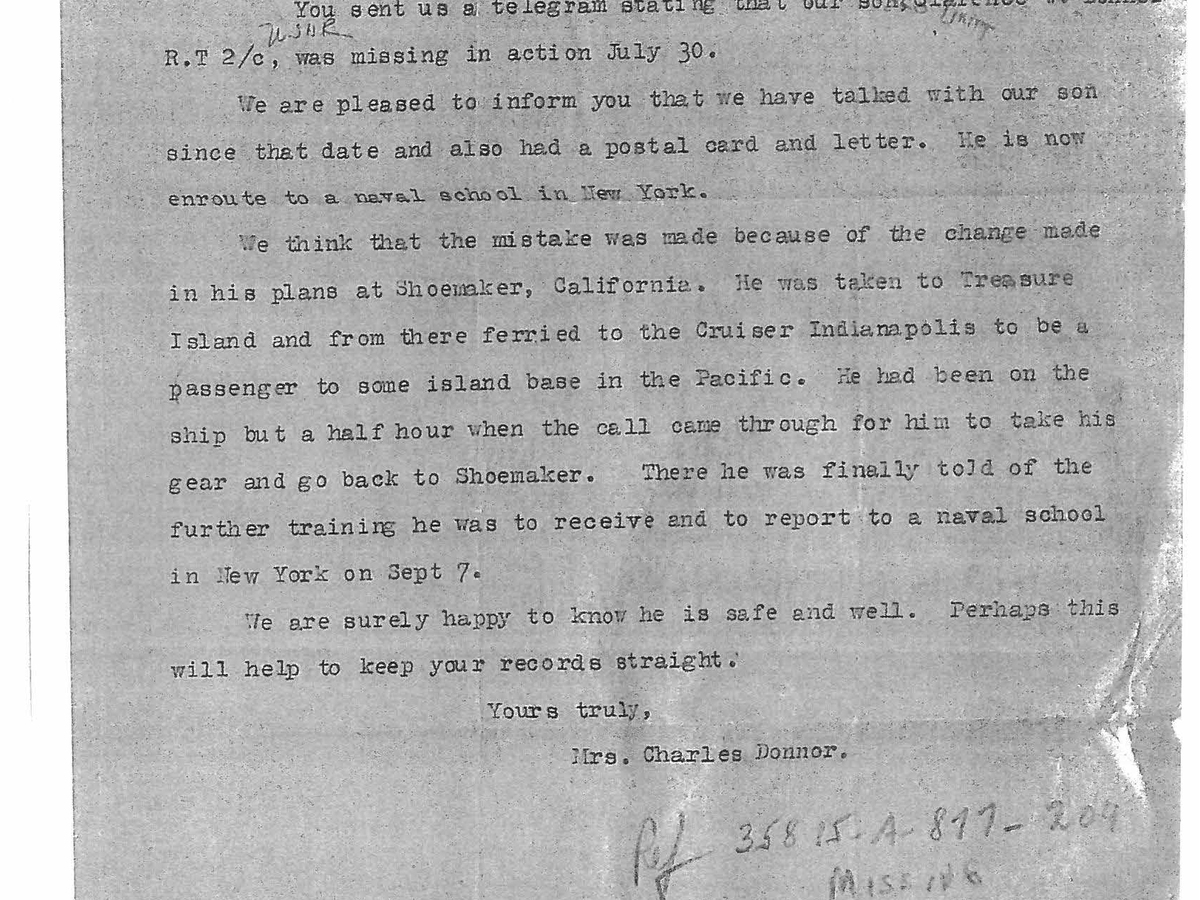 A copy of a letter from the mother of RT2c Clarence W. Donnor to the Chief of Naval Personnel.

The Navy quickly changed Donnor's classification from "missing" to "survivor" and apologized: "Any anxiety you may have been caused by the telegram stating that your son was missing is deeply regretted."

Even so, thanks to a simple clerical error, Donnor's fate and that of the USS Indianapolis have been intertwined ever since.

He was aboard the Indianapolis briefly before being sent ashore after receiving his new orders immediately before the cruiser departed San Francisco.

"Donnor's arrival onboard was apparently recorded, but his hasty departure overlooked," Hulver, a historian with the Naval History and Heritage Command and Vladic, a filmmaker and author, write. "Thus, when the paper records were reconstructed, he remained on the final crew list resulting in a complement of 1,196 — one man too many."

Wreckage Of USS Indianapolis, Sunk By Japanese In WWII, Found In Pacific

It was Vladic who first suggested that Donnor was the key to resolving the official figures in an article published last year in the U.S. Naval Institute's Proceedings magazine.

And that is the number the Navy had stuck to, until now. The official figure has been revised to 1,195 to reflect that Donnor was not aboard.

The survivor count has also been in dispute: The Navy has always maintained it was 316, but others — apparently counting Donnor on the crew list and the survivor list — say it was 317. It turns out the Navy's original figure of 316 is correct.

Donnor survived the war and was discharged from the Navy in 1946. The report by Hulver and Vladic does not say what became of him. However, an obituary list from Big Rapids, Mich., found online, has a Clarence W. Donnor as having died in 2002. NPR was unable to immediately verify that it is the same person.