Accessibility links
U.S.-China Trade War Fears Send Global Stock Markets Tumbling : The Two-Way The Dow lost a total of more than 1,100 points in the past two days amid rising trade tensions between the U.S. and China. Japan's Nikkei dived 4.5 percent, and indexes also fell in Europe. 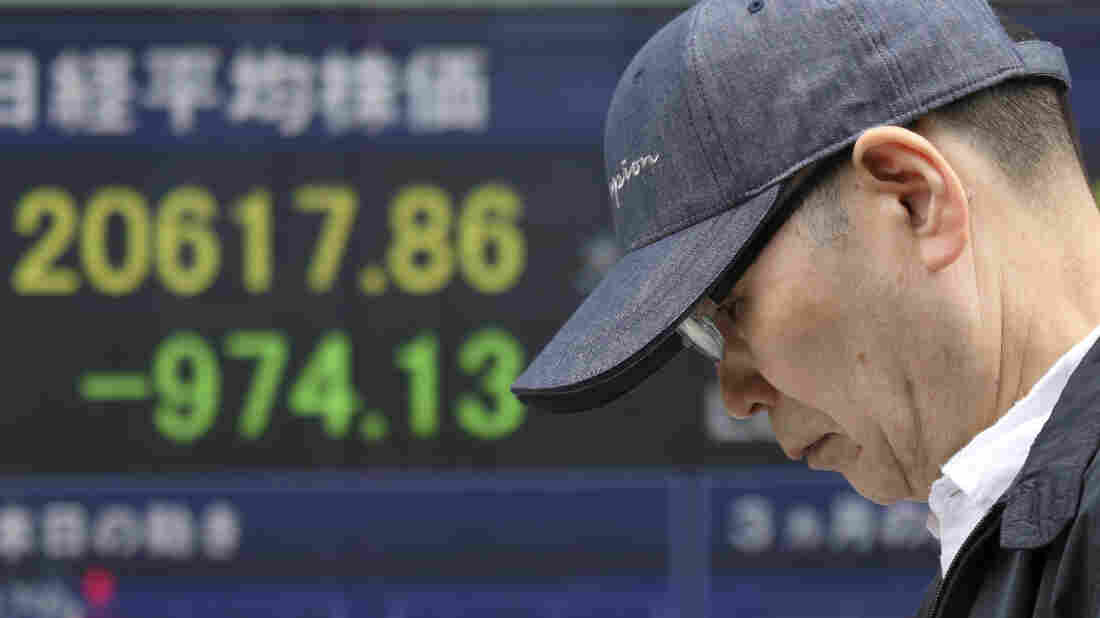 A man walks by an electronic stock board of a securities firm in Tokyo, on Friday. Asian stock markets slumped after Beijing responded to the Trump administration's tariff hikes by saying it may order higher import duties on a range of U.S. goods. Koji Sasahara/AP hide caption 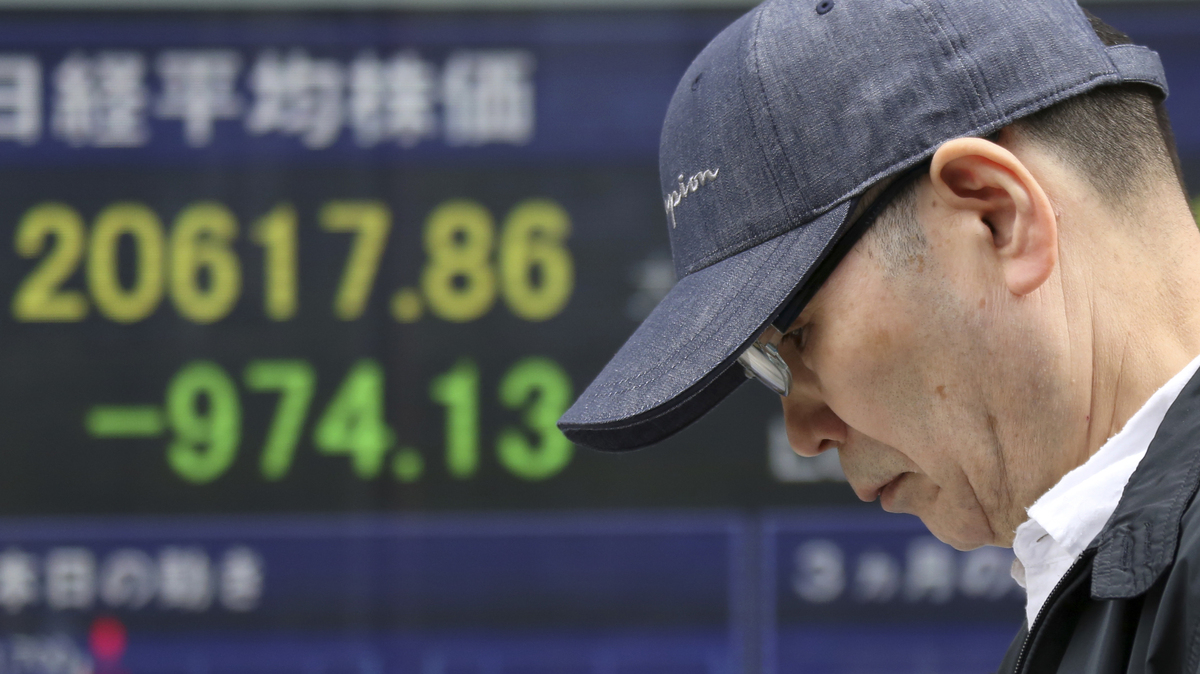 A man walks by an electronic stock board of a securities firm in Tokyo, on Friday. Asian stock markets slumped after Beijing responded to the Trump administration's tariff hikes by saying it may order higher import duties on a range of U.S. goods.

Major stock indexes around the world fell Friday amid continuing worries that the U.S. and China are about to enter into a trade war. The Dow Jones industrial average fell an additional 424 points, or about 1.8 percent, to 23,533, for a two-day drop totaling more than 1,100 points.

Stock indexes from New York to Tokyo fell as the White House prepared to impose stiff tariffs on Chinese imports. The Chinese government announced a list of retaliatory tariffs it would impose on about $3 billion worth of U.S. exports, in response to new U.S. tariffs on steel and aluminum imports.

"Investors are rattled about the economic and inflation impacts of tariffs and a potential trade war," said Greg McBride, Bankrate.com's chief financial analyst. "This nine-year bull market has been sustained by a growing economy in a low-inflation, low-interest-rate world. Now those conditions are called into question."

Earlier this week, the Federal Reserve announced a quarter-point increase in interest rates — its sixth hike since December 2015 after keeping rates at near zero for seven years.

In earlier trading in Asia on Friday:

-- The Shanghai Composite Index was off nearly 3.4 percent.

In Europe, London's FTSE 100 fell about 0.4 percent, the German DAX dropped 1.8 percent and the French CAC index was down 1.4 percent.

"This can turn ugly on a global scale very quickly," Robert Carnell, chief economist at ING Asia Pacific, was quoted in The Financial Times as saying of the market fluctuations.

Dow Drops 724 Points Amid Fears Of A U.S. Trade War With China

What Newly Proposed Tariffs On China Mean For The U.S. Business Community

"If the tariffs go ahead as planned, then we believe China will retaliate," Carnell said. "It is impossible to imagine that they cannot. And then we expect the U.S. to retaliate further."

The newspaper quoted ANZ economists Raymond Yeung and Daniel Wilson as saying: "Although the face value of the U.S. tariff will be small, President Trump may push other countries to take sides, resulting in a divided world. The scale of the trade war would be broadened. This is the biggest risk lying ahead."

However, not everyone was convinced that the sell-off was directly related to newly restrictive U.S. trade policies.

"Analysts at Swiss bank UBS on Friday said it was important not to overstate the direct impact of these tariffs on the global economy or equity markets at this stage.

" 'We don't downplay the potential risks. This latest action is likely to have a negative effect on Asian exports, which are currently growing at 12-13 percent a year,' the analysts said in a note."

Daniel Lockyer, a senior fund manager at Hawksmoor Investment Management, is quoted by Reuters as saying that some felt the sell-off in stock markets was long overdue.

"It could have been anything that caused it; it just happened to be trade," he told the news agency.