Accessibility links
Hundreds Of Thousands March For Gun Control Across The U.S. : The Two-Way Massive crowds descended upon Washington, D.C., and across the nation Saturday to march for gun control in the U.S., galvanized by the deadly shooting at a high school in Parkland, Fla., last month.

Hundreds of thousands of students, teachers, parents and victims rallied in Washington, D.C., and across the country on Saturday to demand tougher gun control measures, part of a wave of political activism among students and others impacted by school shootings.

The "March for Our Lives" protest in the nation's capital was organized by students after 17 people were killed in a mass shooting at Marjory Stoneman Douglas High School in Parkland, Fla., last month.

The students are frustrated by what they say is the inaction of adults, especially politicians, who offer thoughts and prayers in the wake of school shootings but fail to pass legislation that protect kids from gun violence. They hope these marches will provide momentum for change ahead of the upcoming midterm elections.

"I think it's something that if any politician pushed in general, they would really have an easy time getting re-elected because they would be, they would show that they're practicing what they preach and are trying to be leaders in their own right, but right now I think in Washington, we're not seeing that," David Hogg, one of the survivors of the Parkland shooting, told Weekend Edition Saturday.

The march officially began at noon, but protesters started gathering along Pennsylvania Avenue near the U.S. Capitol building early Saturday morning; the event's organizers expected the turnout to exceed 500,000 participants. The event in Washington was one of more than 800 coast to coast to push for stricter gun laws.

In the U.S. capital, chants of "vote them out" rang out in between dozens of student speakers from elementary to high school age, including several survivors of the Parkland shooting as well as Martin Luther King Jr.'s granddaughter. There were also performances by Jennifer Hudson, Miley Cyrus and Ariana Grande.

Student speakers used the national stage to call for an assault weapons ban, limits on high-capacity magazines and universal background checks. They also called on young people to register to vote.

"Politicians either represent the people or cannot," said Cameron Kasky, a Marjory Stoneman Douglas student who survived the shooting. "Stand for us, or beware, the voters are coming."

To close out the rally, Emma Gonzalez, a Parkland survivor who has become one of the main faces of this movement, delivered an impassioned speech in which she named each of the 17 victims. Then, as tears streamed down her face, Gonzalez defiantly held the stage in silence for the duration of more than six minutes, the amount of time the gunman carried out his deadly assault on her high school. Protesters chanted "never again." Then, a timer beeped.

"Since the time that I came out here, it has been six minutes and 20 seconds," Gonzalez said. "The shooter has ceased shooting and will soon abandon his rifle, blend in with the students as they escape and walk free for an hour before arrest. Fight for your lives before it's someone else's job." 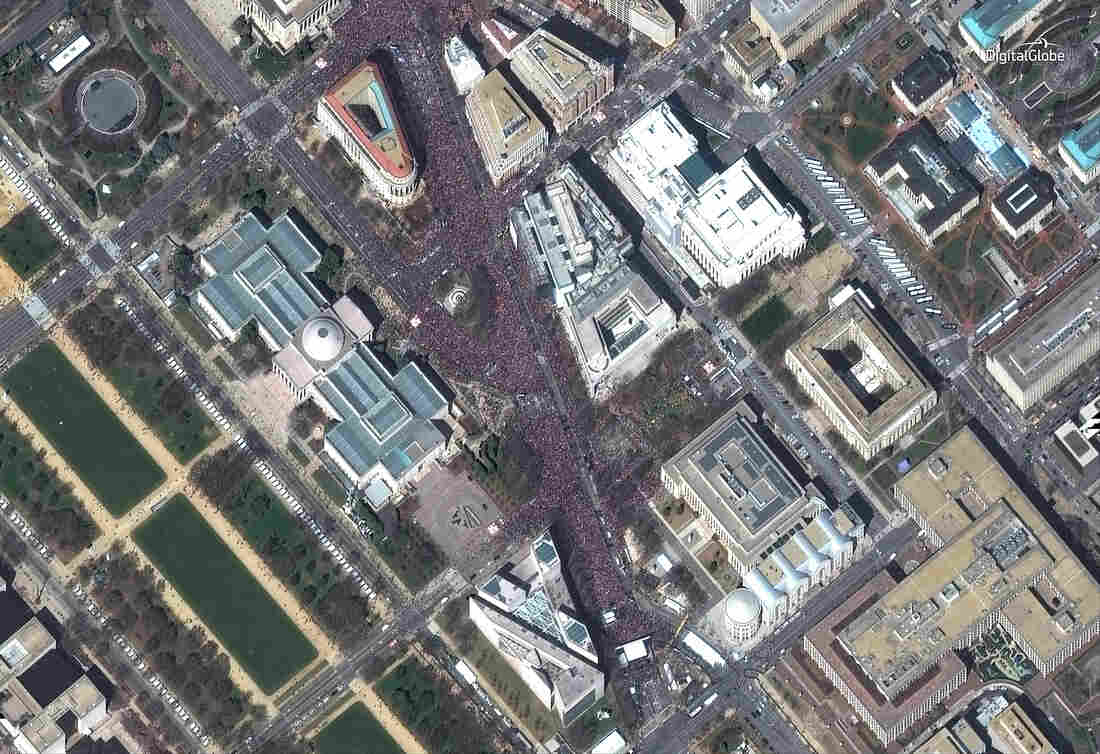 This is a satellite image of the "March for Our Lives" rally in Washington, D.C. DigitalGlobe hide caption 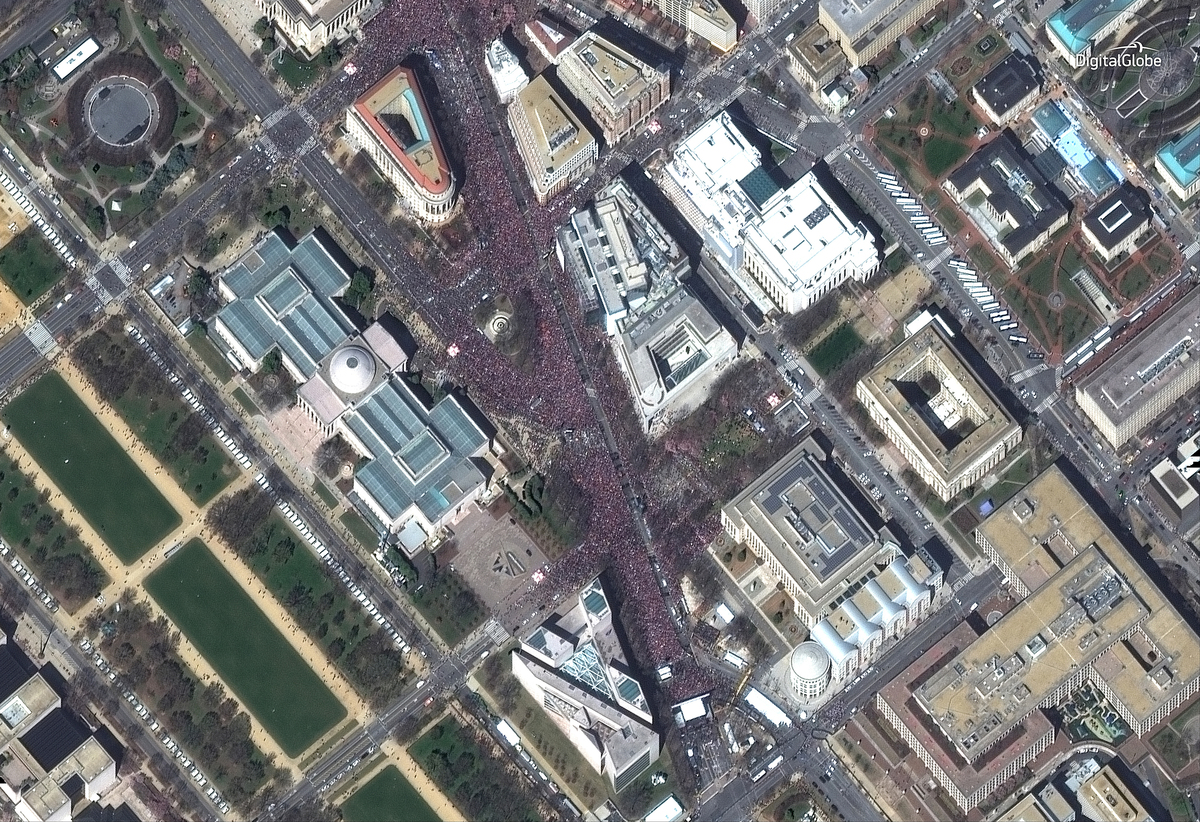 This is a satellite image of the "March for Our Lives" rally in Washington, D.C.

Edna Chavez, a 17-year-old from south Los Angeles who lost her brother Ricardo to gun violence when he was in high school, prompted the D.C. crowd to chant his name. "It is normal to see flowers honoring the lives of black and brown youth that have lost their lives to a bullet," Chavez said.

Meanwhile in her hometown, thousands rallied in downtown L.A., marching from Pershing Square to Grand Park. Featured speakers included Mayor Eric Garcetti and comedian Amy Schumer. Garcetti laid out California's bans on assault rifles and other gun control measures as a model for federal legislation. "We stand together for your senselessly slain classmates and friends and say this has to stop!" Schumer, a cousin of Senate Minority Leader Chuck Schumer (D-N.Y.) who also attended the event, said in support of the Parkland shooting survivors.

Elsewhere, demonstrators in Chicago focused on the daily violence young people face in a city long plagued by deadly shootings. In a packed Union Park, speakers called for greater investment in communities and schools, reports member station WBEZ's Linda Lutton. Activist Amina Henderson said Chicago's youth stand in solidarity with the Parkland students, but that "Gun control is not the only thing that we need. We need things to prevent these things from happening."

Saturday's demonstrations follow a national school walkout on March 14, exactly one month after the Parkland shooting, in which students across the country walked out of classes for 17 minutes to honor the 17 victims in Florida.

That deadly shooting inspired a generation of youth activists, who have been raised in a time marked by gun violence, to raise awareness of a growing support for tighter gun laws, which still face powerful political opposition from gun supporters backed by the National Rifle Association.

President Trump, who was in Florida for the weekend at his Mar-a-Lago resort, had yet to weigh in on Twitter about the protests as of Saturday evening. After the Parkland shooting, Trump held a number of listening sessions with students and even floated the idea of raising the age of gun ownership to 21 and tightening background checks.

But in the end, the administration didn't push for any bold measures. However, on Friday, the Justice Department proposed a plan to ban bump stocks, which are devices that allow a semiautomatic weapon to fire like a machine gun.

"We applaud the many courageous young Americans exercising their First Amendment rights today," White House deputy press secretary Lindsay Walters said in a statement. "Keeping our children safe is a top priority of the President's, which is why he urged Congress to pass the Fix NICS and STOP School Violence Acts, and signed them into law."

Former President Barack Obama said on Twitter that he and Michelle Obama were "inspired" by the protests. Speaking at an event in Japan on Sunday, Barack Obama noted that the March for Our Lives events were "duplicated all around the world. And this was all because of the courage and effort of a handful of 15 and 16 year olds.

"That's a testimony to what happens when young people are given opportunities and I think all institutions have to think about how do we tap into that creativity and that energy and that drive," he said. The former president also said that "a lot of our problems are caused by old men — no offense, men who are old."

Pope Francis, without directly acknowledging the March for Our Lives, used a Sunday service to encourage young people to "shout."

" 'Dear young people, you have it in you to shout," he told young people, urging them to be like the people who welcomed Jesus with palms rather than those who shouted for his crucifixion only days later.

" 'It is up to you not to keep quiet. Even if others keep quiet, if we older people and leaders, some corrupt, keep quiet, if the whole world keeps quiet and loses its joy, I ask you: Will you cry out?'

"The young people in the crowd shouted, 'Yes!'

"While Francis did not mention Saturday's marches in the United States, he has often condemned weapons manufacturing and mass shootings." 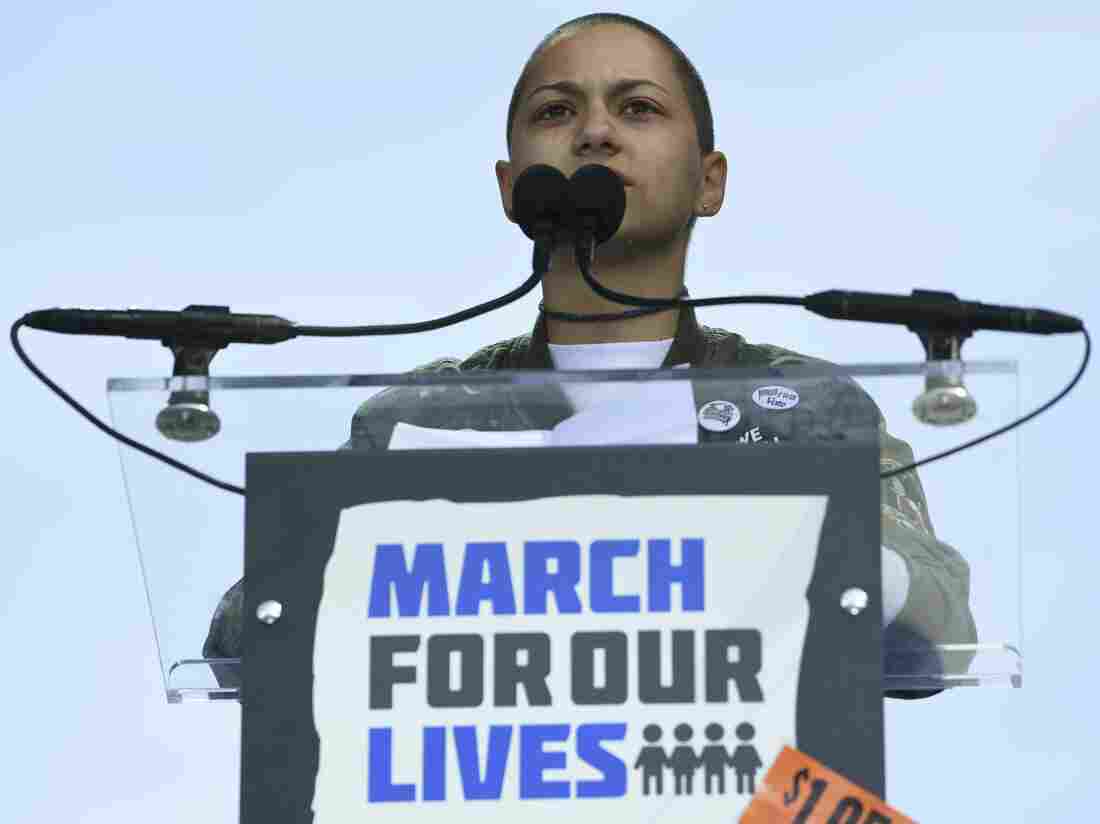 In Washington, D.C., Parkland survivor Emma Gonzalez held the stage for more than six minutes, the amount of time the gunman carried out his deadly assault on her high school. Jim Watson /AFP/Getty Images hide caption 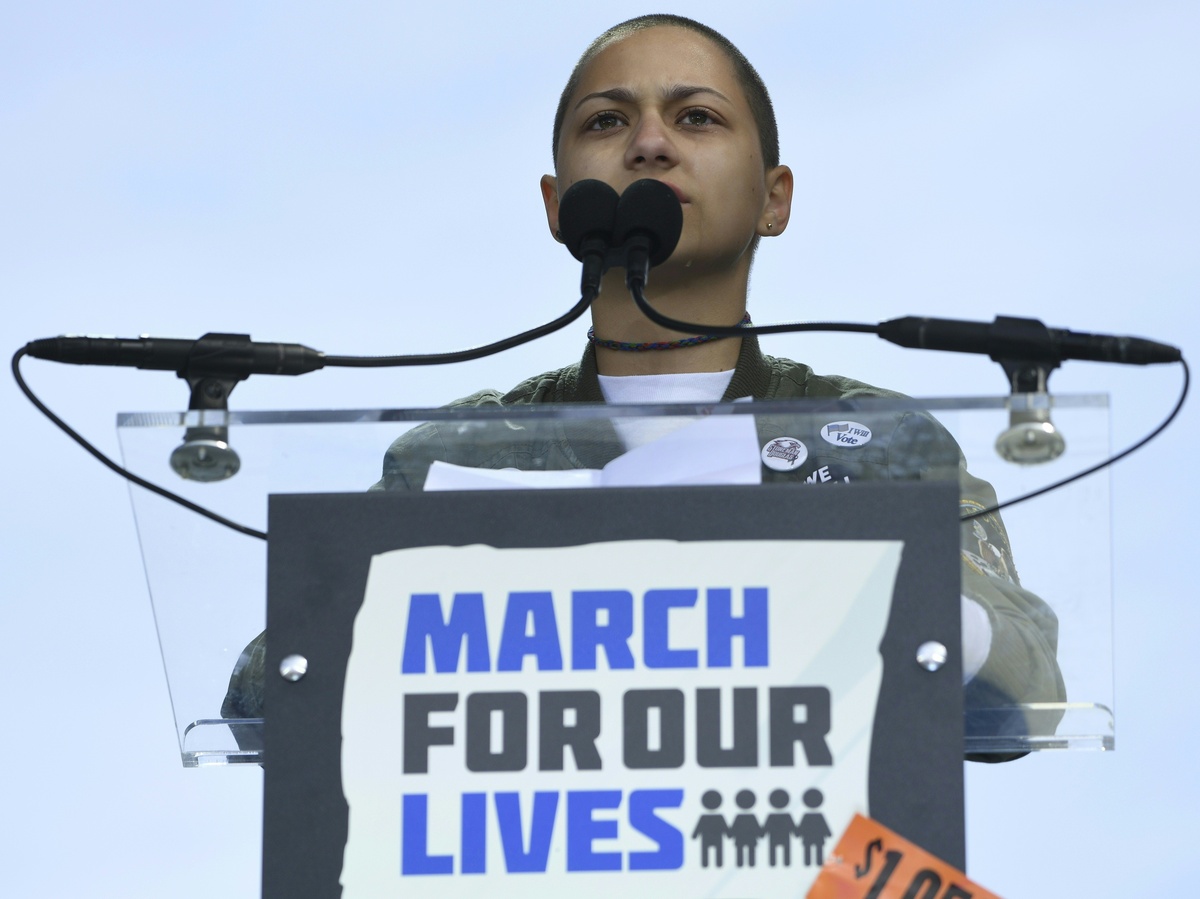 In Washington, D.C., Parkland survivor Emma Gonzalez held the stage for more than six minutes, the amount of time the gunman carried out his deadly assault on her high school.

Organizers of the gun control rallies hope the massive crowds and impassioned speeches from teenage activists will tap into a growing sentiment for gun control. A new poll from The Associated Press-NORC Center for Public Affairs found that 69 percent of Americans think gun laws in the U.S. should be stricter, up from 61 percent in October 2016 and 55 percent in October 2013.

Even as momentum for tighter gun control seems to reach historical levels, the AP also found that most people don't believe politicians will take action. Student activists like David Hogg say that their generation's action will be the tipping point for change on guns.

"At the end of the day, what our generation is fighting for is not only for us, the kids that are alive right now, but the future of America, we can and we will outlive our opponents because they are old and they are stuck in their old ways," Hogg says. "We will change the face of America with or without our opponents."