Accessibility links
French Man Praises Police Death, Is Arrested For Apologizing For Terrorism : The Two-Way The man, who had run for political office in France, tweeted "how great!" about the death of an officer who offered himself up in a hostage exchange Friday. 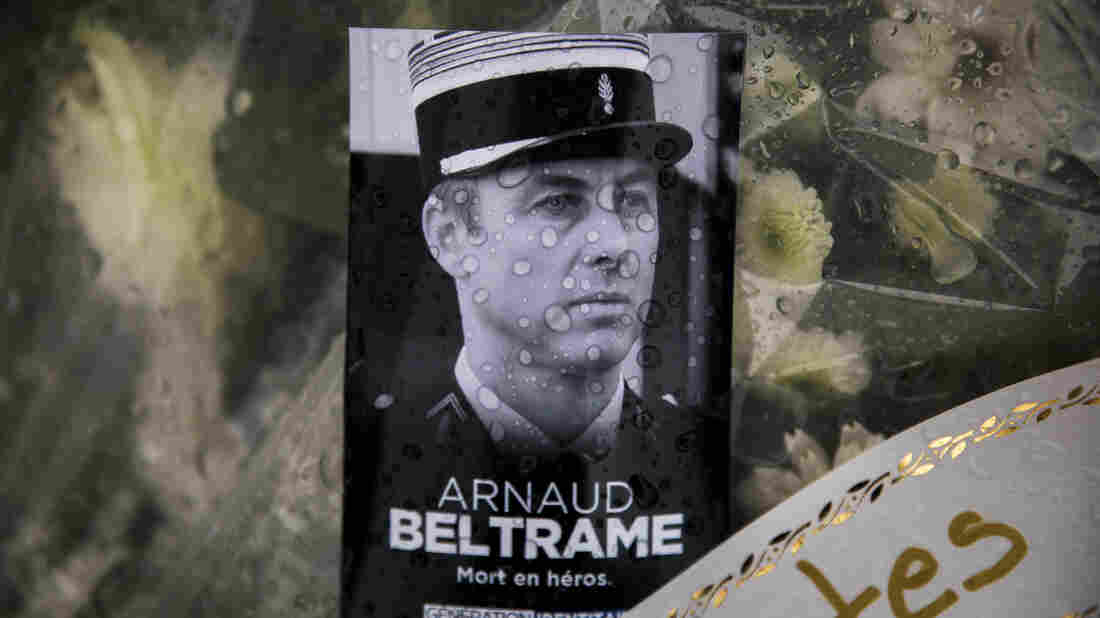 A photo of Lt. Col. Arnaud Beltrame rests on a bunch of flowers at the main gate of the police headquarters in Carcassonne, France. On Sunday, a man was arrested on charges of apologizing for terrorism after seemingly praising Beltrame's death on social media. Emilio Morenatti/AP hide caption 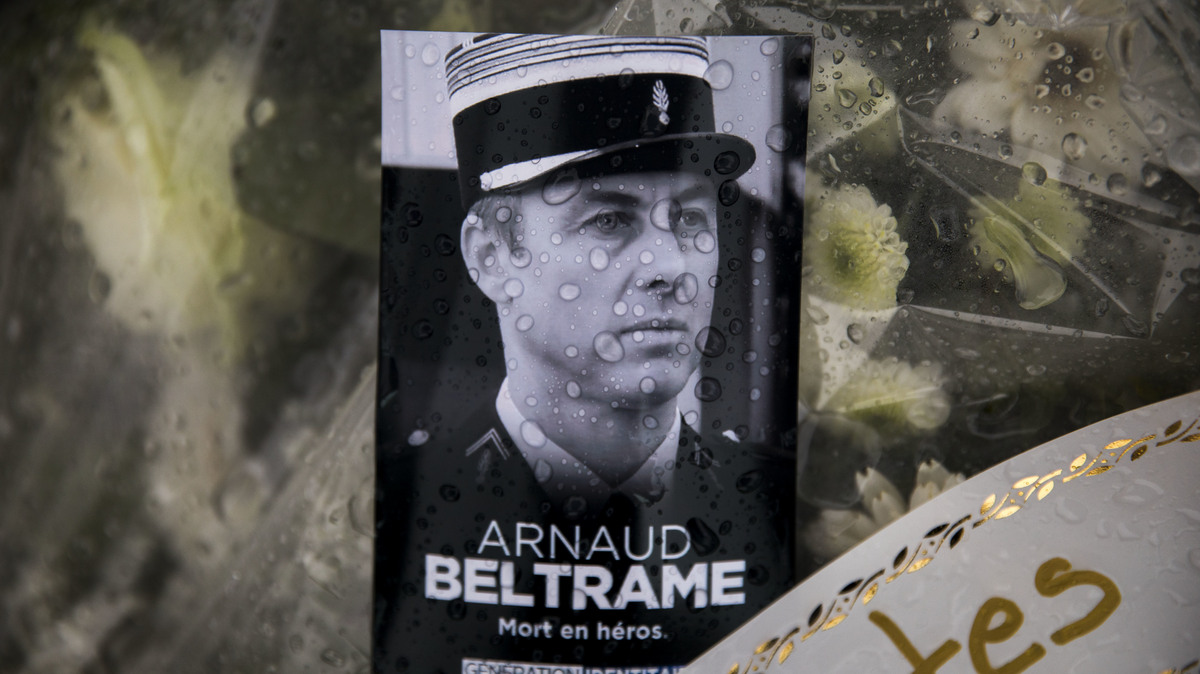 A photo of Lt. Col. Arnaud Beltrame rests on a bunch of flowers at the main gate of the police headquarters in Carcassonne, France. On Sunday, a man was arrested on charges of apologizing for terrorism after seemingly praising Beltrame's death on social media.

One day after a French police officer was killed by a gunman in a hostage exchange, a man was arrested for seemingly celebrating Lt. Col. Arnaud Beltrame's death on Twitter and Facebook.

"Every time a police officer is killed, and it's not every day, I think of my friend Rémi Fraisse," Stéphane Poussier, a onetime candidate in legislative elections in Northwestern France, tweeted, according to French media. "This time it was a colonel — how great!"

Fraisse was a 21-year-old conservationist who died after police threw a stun grenade during clashes at a 2014 protest against a dam project. Fraisse's death outside Toulouse, sparked protests across the country. A French court found the officer who threw it did not intend to kill Fraisse.

"Last night I dreamed of Rémi Fraisse ... He said he was happy to welcome a colonel from the gendarmerie!" Poussier said in a Facebook post Saturday.

Poussier was arrested under a law prohibiting apologizing for terrorism, which states that speaking favorably about or approving a terrorist act is a crime.

The offense is punishable by a fine of more than $120,000 USD and seven years in prison.

As The Two-Way reported, 44-year-old Beltrame was one of the first officers on the scene Friday after a gunman took hostages at a grocery store in Trèbes in the south of France.

The attacker, who claimed he was acting for ISIS, killed Beltrame and three others in all, before being killed by police. Several others were wounded but managed to escape.

France's Interior Minister Gérard Collomb said Beltrame managed to leave his cell phone on after entering the building, allowing officers to to keep apprised of the situation.

Collomb praised Beltrame's "heroism, bravery and sacrifice," a sentiment shared by many others in France.

"I'm being harassed," Poussier posted Saturday, "I've recorded everything, numbers, insults, death threats. So I borrowed a friend's gun. If anything happens to me, I accuse the gendarmerie!"

The New York Times reports French authorities seized on the law against apologizing for terrorism in the days after the January 2015 attacks on Charlie Hebdo and elsewhere in the Paris area that left 17 people dead. At the time, up to 100 people were under investigation for making comments in support of terrorism, the Times reported.

On Sunday, Unité SGP Police, a police union, tweeted, "It is intolerable that an ex-legislative candidate can be pleased about the death of a police officer, sanctions should be taken."

The party whose ticket Poussier had run on, La France insoumise, issued a statement, condemning his words as "shameful and abject" and saying they have nothing to do with the party. It added that it has removed Poussier from the party platform.