Accessibility links
One Giant Leap For A Man, One Small Step Toward Proving Earth Is A 'Frisbee' : The Two-Way "Mad" Mike Hughes achieved the improbable, launching himself over 1,800 feet high in his homemade rocket — and surviving. It's all part of his quest to determine for himself whether Earth is flat. 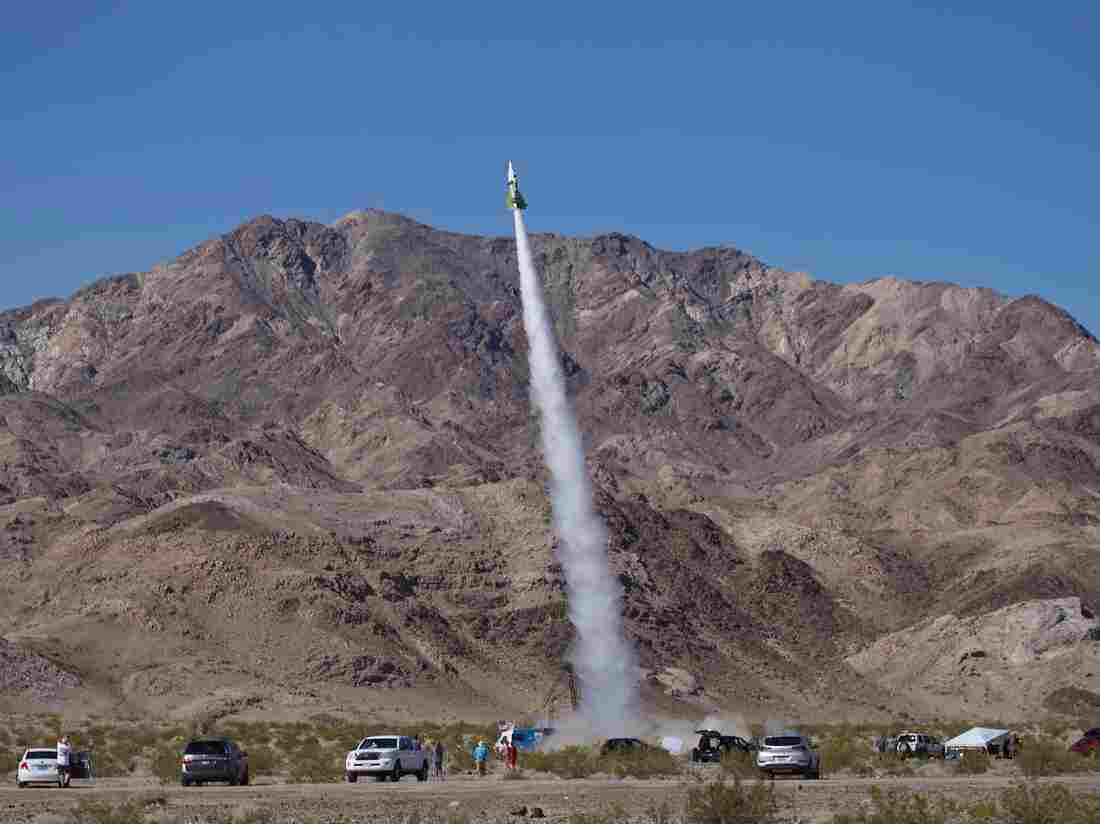 "Mad" Mike Hughes' homemade rocket takes to the skies above Amboy, Calif., on Saturday. The self-taught rocket scientist who believes the Earth is flat propelled himself about 1,875 feet into the air before a hard landing in the Mojave Desert left him injured. Matt Hartman via AP hide caption 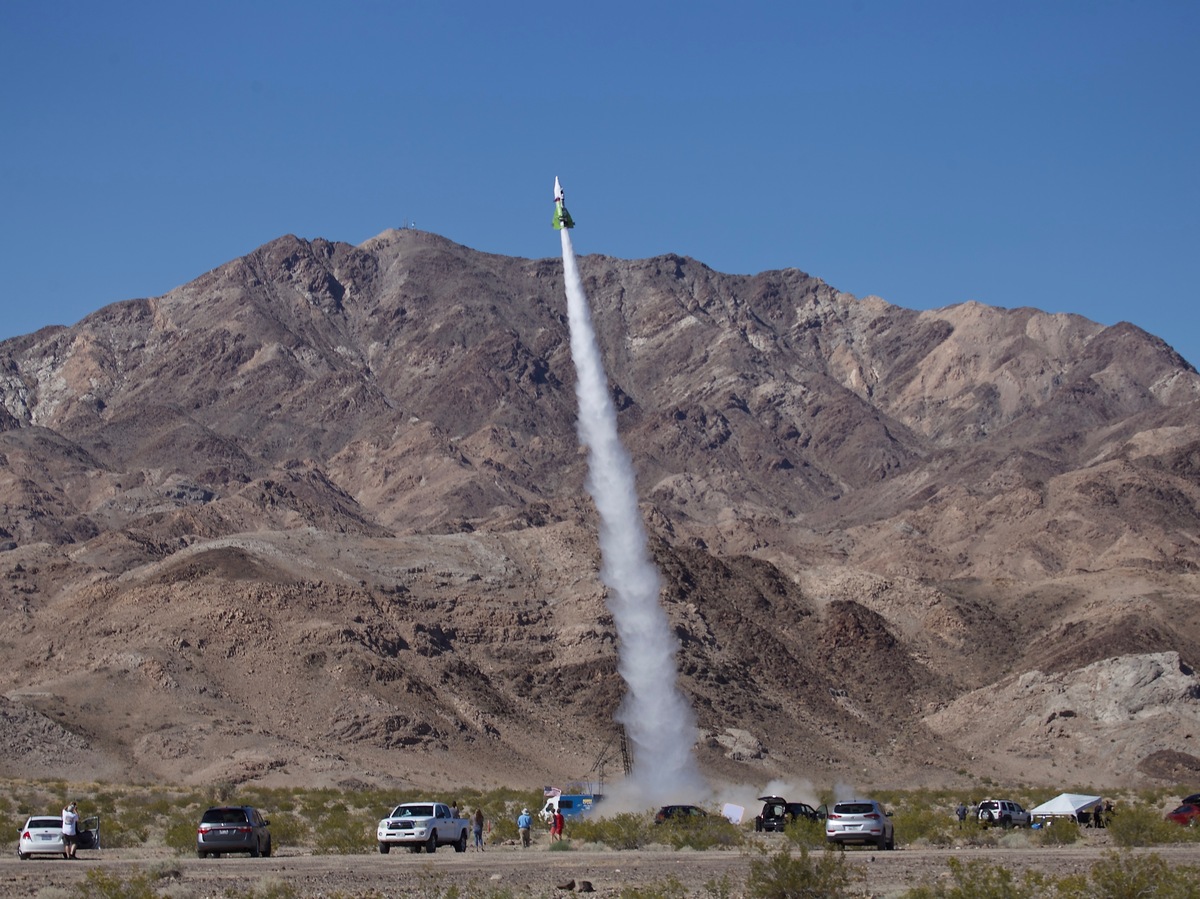 "Mad" Mike Hughes' homemade rocket takes to the skies above Amboy, Calif., on Saturday. The self-taught rocket scientist who believes the Earth is flat propelled himself about 1,875 feet into the air before a hard landing in the Mojave Desert left him injured.

After months of anticipation, preparation and repeated frustration, "Mad" Mike Hughes didn't even wait to perform a countdown. Instead, on Saturday afternoon in the Mojave Desert, the 61-year-old limousine driver stuffed himself into the central compartment of his homemade rocket, had an assistant close the hatch — and without further warning for the camera crew perched nearby, launched himself more than 1,800 feet into the deep blue sky.

And he didn't die.

All told, the journey took around a minute. His parachutes guided him groundward to safety (mostly), and once he landed, he celebrated his achievement with a paramedic and his backboard. Onlookers called out congratulations as Hughes was checked for serious injuries.

The launch marks Hughes' second successful flight, after he rocketed across a quarter-mile of Arizona desert in 2014, and just one step in his long-term plan to get himself to space in a vehicle of his own creation. From there, he hopes to finally determine for himself whether more than two millennia of scientific understanding and physical exploration — from Aristotle to Ferdinand Magellan and NASA — are actually bunk.

"Do I believe the Earth is shaped like a Frisbee? I believe it is," Hughes told The Associated Press. "Do I know for sure? No. That's why I want to go up in space."

As we reported in November, Hughes converted to his flat-Earth beliefs only in recent years, not long after his first fundraising campaign netted just 0.2 percent of its goal. But then he announced his conversion — which he says he undertook after he "researched it for several months in between doing everything else" — and his fundraising numbers saw a significant uptick.

The launch had originally been planned for November, but that plan hit some snags with technical setbacks and what he called disagreements with the federal Bureau of Land Management. So, he slid the proposed the launch pad (which in this case is a rejiggered mobile home) to some private land nearby in Amboy, Calif., and tried again in February.

Flat-Earther Delays Launch In His Homemade Rocket, Saying 'It's Not Easy'

That live-streamed attempt fizzled as the steam-powered rocket failed to lift off.

"I pulled the plunger five different times," Hughes explained at the time, according to The Washington Post. "I considered beating on the rocket nozzle from the underneath side. But you can't get anyone under there. It'll kill you. It'll scald you to death. It'll blow the skin and muscle off your bones."

"This thing wants to kill you 10 different ways. This thing will kill you in a heartbeat," he told the AP.

But ultimately, he said, he was simply "tired of people saying I chickened out and didn't build a rocket. I'm tired of that stuff. I manned up and did it." 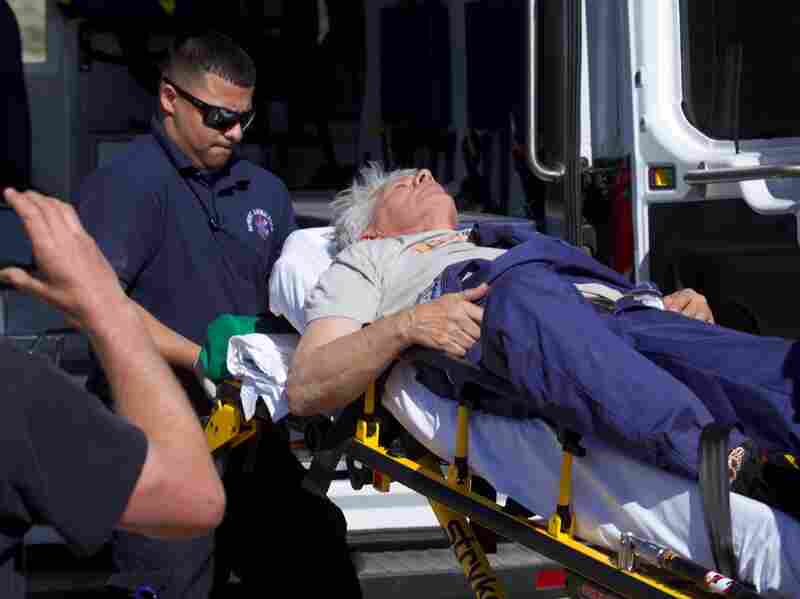 Medical professionals pull Hughes' stretcher aboard an ambulance after his rough landing left him in less than ideal condition. Matt Hartman via AP hide caption 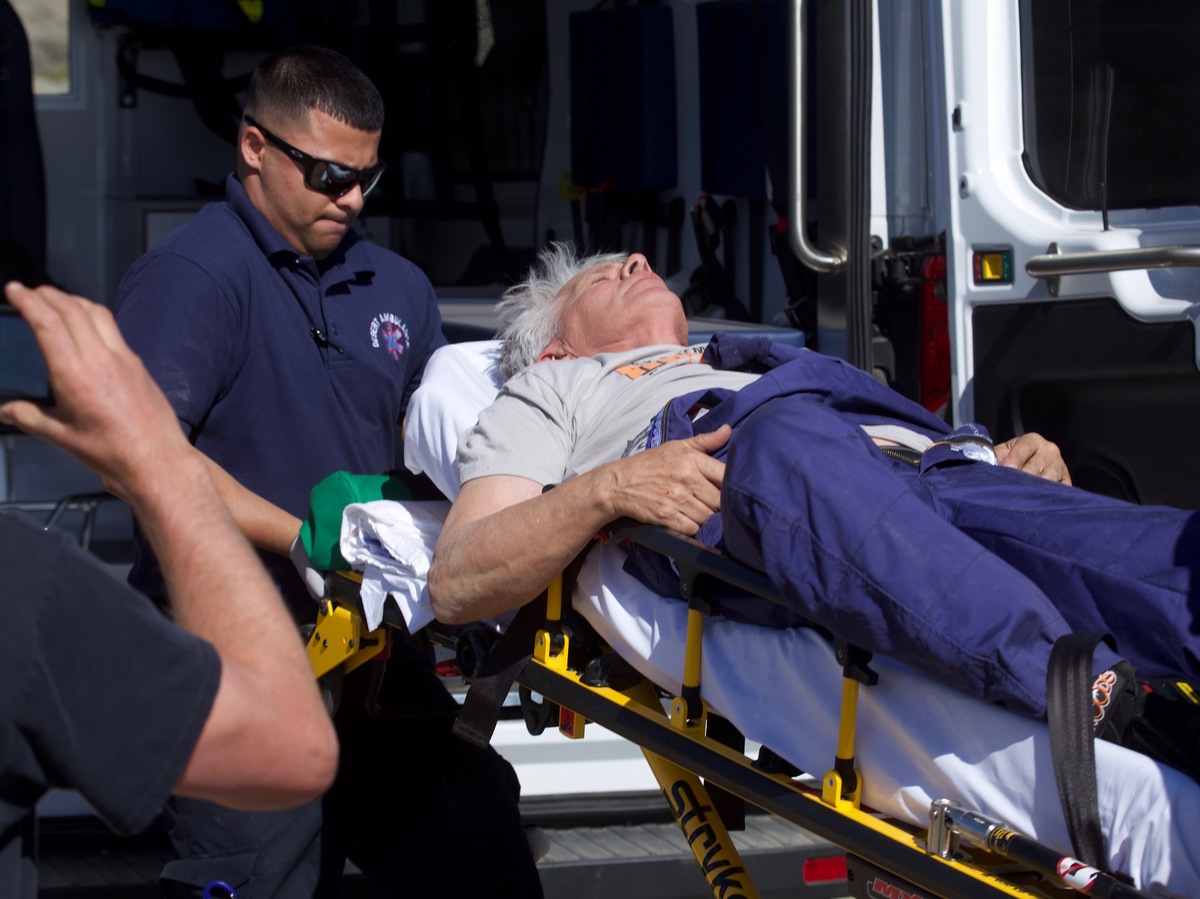 Medical professionals pull Hughes' stretcher aboard an ambulance after his rough landing left him in less than ideal condition.

The video by Noize TV (which, fair warning, features plenty of salty language) depicts Hughes' green and white rocket as it departs the parched scrubland and arcs into the sky at an estimated 350 mph. Then, Hughes pulls his parachutes, easing a fall caused by the exact same gravitational forces that give planets — including Earth — their spherical shape.

He successfully, if a little painfully, lands his 1,875-foot leap. Eventually, the AP notes, he hopes to build and launch a vehicle that will take him to an altitude of nearly 360,000 feet, or 68 miles.

For now, though, his immediate goals are a little less ambitious.

"Am I glad I did it? Yeah. I guess," he told the wire service. "I'll feel it in the morning. I won't be able to get out of bed. At least I can go home and have dinner and see my cats tonight."