Accessibility links
Kim Jong Un Talks Nukes On Secret Trip To China : The Two-Way The visit to Beijing was Kim Jong Un's first foreign trip since taking power in 2011, and it follows North Korea's recent agreement to hold talks with the leaders of South Korea and the United States. 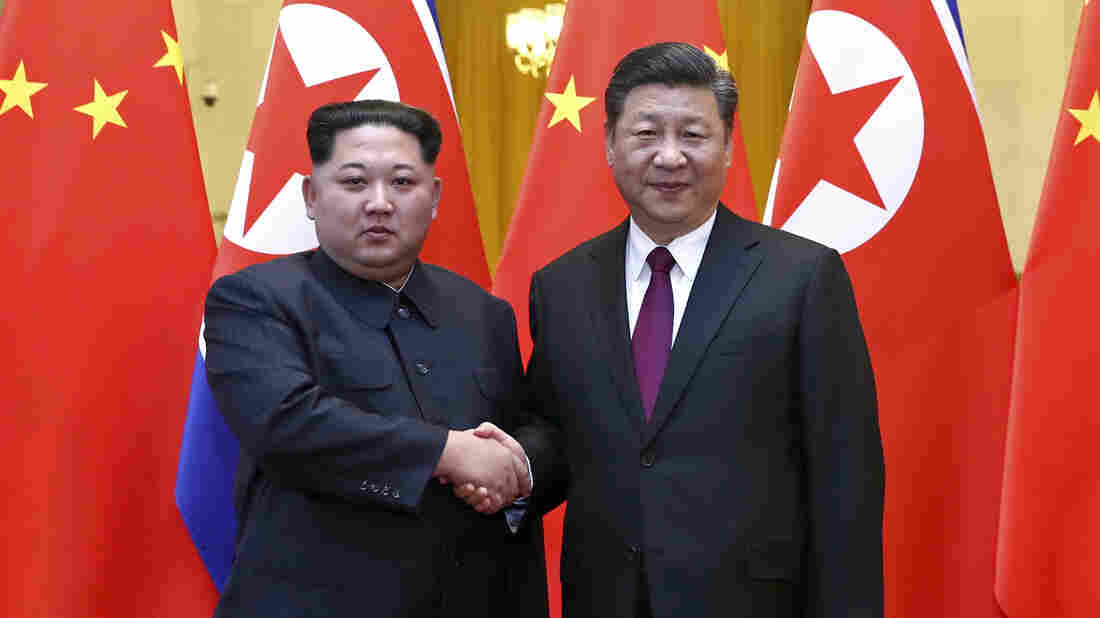 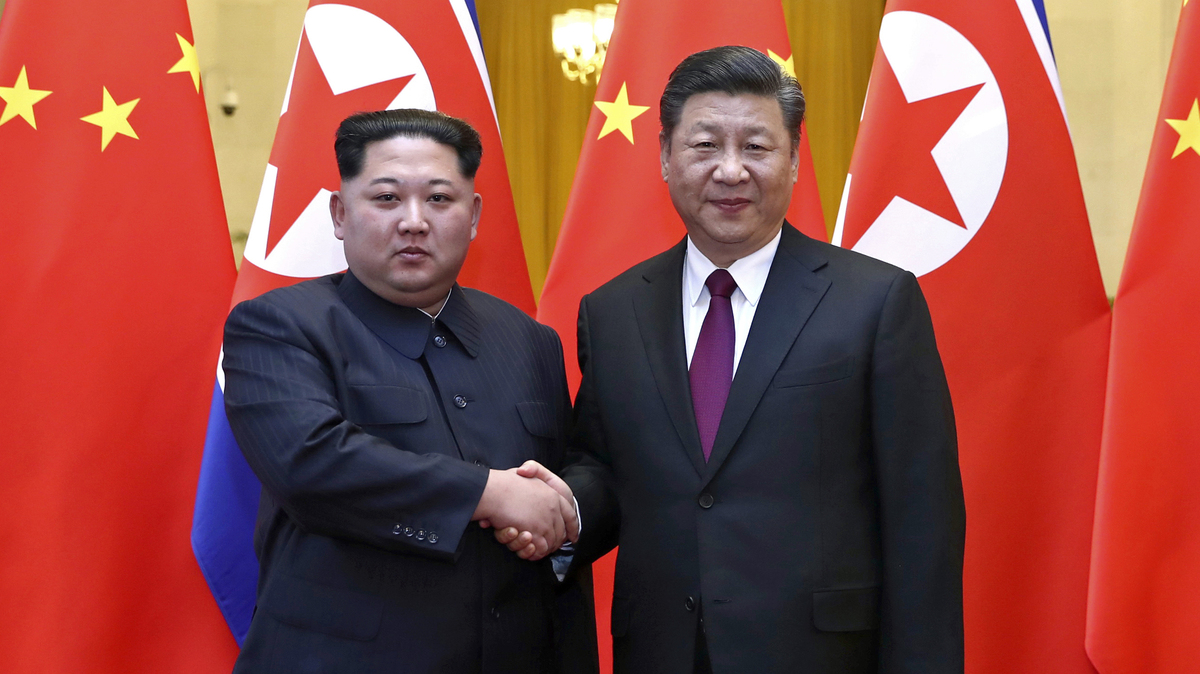 North Korean leader Kim Jong Un and Chinese President Xi Jinping shake hands in Beijing, in this photo provided by China's Xinhua News Agency in Beijing. Kim was making his first known trip to a foreign country since he took power in 2011.

North Korean leader Kim Jong Un paid an unannounced visit to neighboring China, signaling a potential thaw in seven years of tensions between the longtime allies over the North's nuclear weapons program. The visit is Kim's first trip to another country since taking power in 2011, and it follows North Korea's recent agreement to hold talks with the leaders of South Korea and the United States.

The official New China News Agency says Kim told Chinese leader Xi Jinping: "If South Korea and the United States respond with goodwill to our efforts, and create an atmosphere of peace and stability, and take phased, synchronized measures to achieve peace, the issue of the denuclearization of the peninsula can reach resolution."

"The nuclear issue is the only obstacle" to good relations between China and North Korea, says Lu Chao, a North Korea expert at the Liaoning Academy of Social Sciences in the northeastern Chinese city of Shenyang, and without it being addressed, China would not invite Kim for a visit.

Beijing residents couldn't help but feel there was an important visitor in town on Tuesday. Amateur videos and social media postings showed a dark-green train pulling into Beijing's main station. It was similar to the bulletproof boxcars Kim Jong Un's father Jong Il rode across the border during his trips to China, prior to his death in 2011.

A motorcade of more than 20 vehicles, including an ambulance, was seen wending its way through the capital to the state guest house. Yet China's Foreign Ministry spokesperson Hua Chunying told reporters she had no knowledge of anything unusual, saying only that China's government would release any related information "in due course."

The official New China News agency said Kim visited Beijing from March 25-28. Although the report did not explicitly state that Kim had already left the country at the time the report was issued, Lu Chao said the arrangement has traditionally been that the country's state news agencies would hold off on issuing their respective reports until the leader's armored train had trundled back over the Yalu River into North Korea.

This sort of secrecy "may be more convenient for the two countries," Lu says, adding: "there's nothing odd about it."

It is significant that Kim only visited the capital, and not other regions of Beijing. On a final tour to China in 2011, Kim Jong Il was taken to see the booming special economic zone of Shenzhen, adjacent to Hong Kong. That destination was intended to impress upon Kim China's experience, showing that leaders could open up their economies, while still hanging on to power. China is hopeful that, with adequate security guarantees, Kim Jong Un will follow their path.

China labeled Kim Jong Un's first visit unofficial, but it bore all the trappings of an official visit. Officials of the two countries held talks at the Great Hall of the People in Tiananmen Square. Xi and his wife, Peng Liyuan, hosted Kim and his wife, Ri Sol-ju, at a banquet and then took in a cultural performance together.

Xi addressed Kim as "comrade chairman," referring to his position as leader of the ruling Worker's Party. He told him that the "traditional friendship, established and cultivated meticulously by the elder generations of leaders of both parties and both countries, is the precious wealth of both sides."

While this language of socialist solidarity has been typical of the China-North Korea relationship for more than half a century, China's application of sanctions and criticism of its neighbor's nuclear intentions led North Korean state media to criticize their Chinese counterparts last year as "despicable" for seeming to side with Washington against Pyongyang.

The apparent mending of fences between North Korea, its neighbors and the U.S. began as recently as the beginning of this month, when South Korea announced that the North was willing to give up its nuclear weapons and enter into talks with Seoul and Washington, D.C.

North Korea agreed to abandon its nuclear programs in 2005, during six-party talks hosted by China. But Pyongyang stopped participating in the talks in 2009 and threatened never to give up its nuclear ambitions.

Cheng Xiaohe, a North Korea expert at Renmin University of China, aka People's University, in Beijing, says the conditions were ripe in China for Kim's visit.

China's leader Xi Jinping "is at the apex of his power," having just abolished term limits on the presidency and begun a second five-year term, Cheng observes. "And that means China must be proactive, and get involved in the changes on the Korean Peninsula."

He adds that as China is not being included in the talks with South Korean President Moon Jae-in in April and President Trump in May, Xi needs to make sure China's national interests are respected.

The White House said that China's government had communicated the upshot of Kim's visit to China on Tuesday. And Chinese state media report that China's top diplomat Yang Jiechi will visit Seoul this week to inform South Korea about the visit.