Accessibility links
Boy From Viral Police Photo Missing After Fatal Family Car Crash : The Two-Way Police want to know why the family's vehicle crashed into the Pacific Ocean at the bottom of a California cliff. Five members of the Hart family died, Devonte and two of his sisters remain missing. 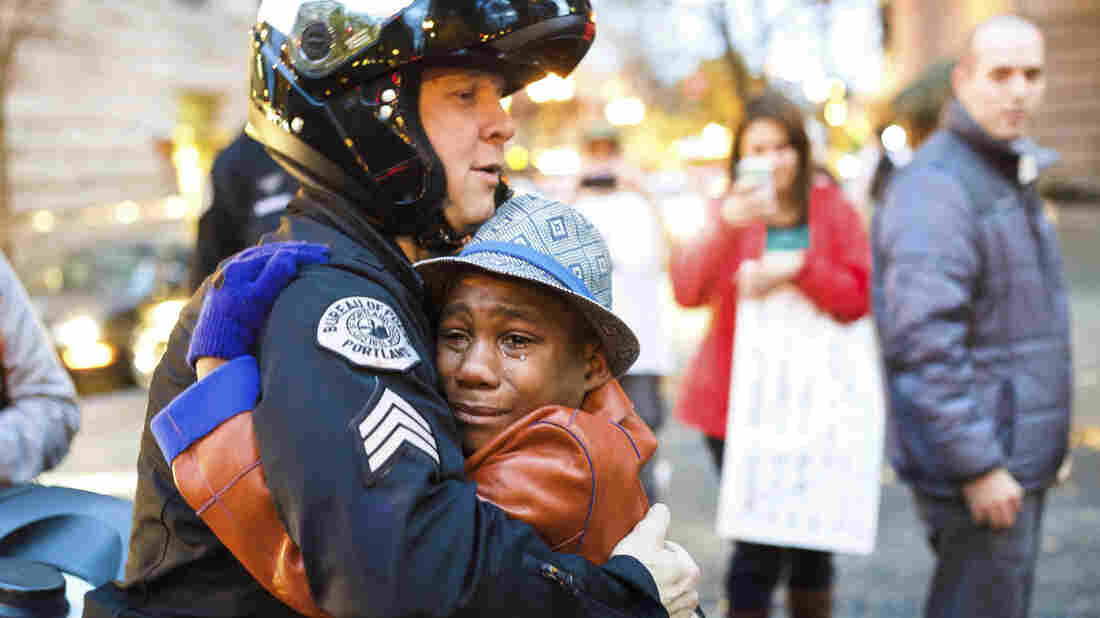 A photo of 12-year-old Devonte Hart went viral in 2014 as he hugged a police officer during a protest against police violence. Less than four years later, the now-15-year-old is feared dead alongside his entire family in a car crash. Johnny Huu Nguyen/AP hide caption 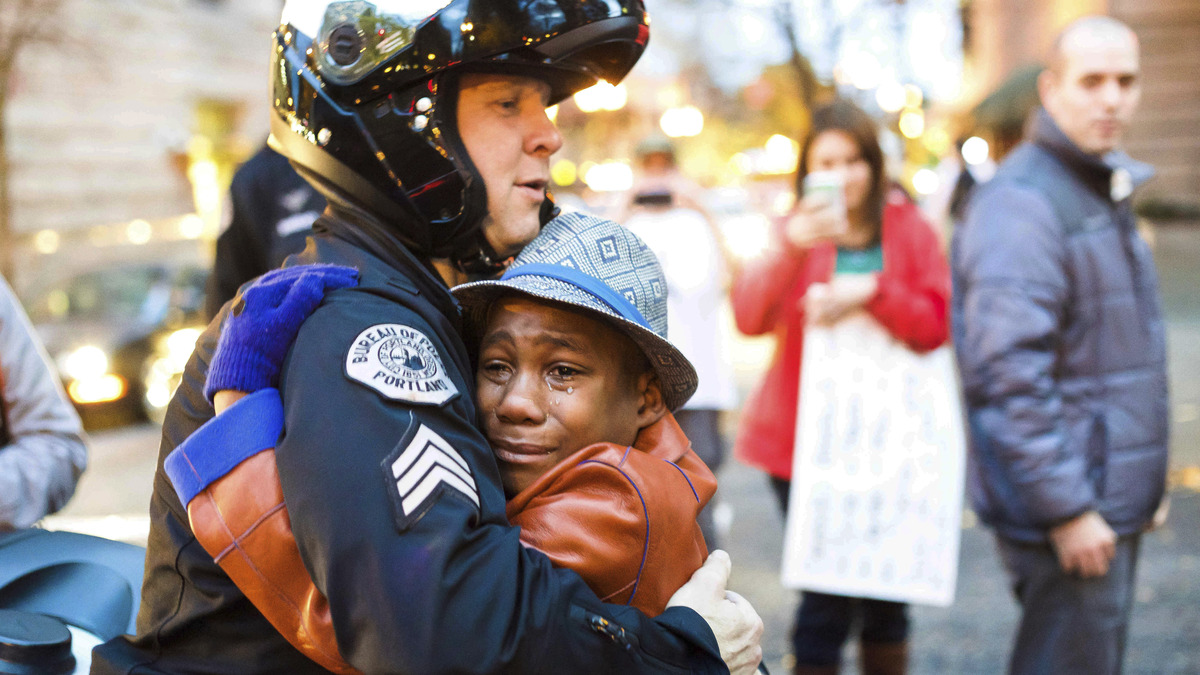 A photo of 12-year-old Devonte Hart went viral in 2014 as he hugged a police officer during a protest against police violence. Less than four years later, the now-15-year-old is feared dead alongside his entire family in a car crash.

In 2014, the face of a 12-year-old boy struck a deep national chord. A black child, tears streaming down his face, gripping a white police officer in an embrace, just as bitterness tore at the nation during Ferguson-related protests.

Today, Devonte Hart is missing and feared dead after his parents and three of his siblings were killed in a crash.

On Monday, a passerby spotted the family's vehicle flipped onto its roof in the Pacific Ocean at the bottom of a 100-foot cliff in a rural part of California's Mendocino County, according to officials.

Parents Jennifer and Sarah Hart, both 38, were found dead inside the S.U.V., rocked by waves washing in and out, say police. Three of their children: Markis, 19, Jeremiah, 14, and Abigail, 14, were recovered outside the vehicle.

Mendocino County Sheriff Tom Allman said at a press conference Wednesday that while police cannot say with certainty that Devonte, Hannah and Sierra had been in the vehicle, "We have every indication to believe that all six children were in there."

Allman added, "We know that an entire family vanished and perished during this tragedy."

With the help of drones, search and rescue crews continue to sweep the shore and ocean, Allman said. And the coroner is investigating the cause of death of the five recovered family members.

Meantime, police are puzzling over what happened.

Allman said he visited the crash site off Route 1 south of Juan Creek and, "I can tell you it was a very confusing scene because there were no skid marks, there were no break marks, there was no indication of why this vehicle traversed approximately 75 feet of a dirt pullout and went into the Pacific Ocean."

Allman added that at this stage of the investigation, "We have no evidence and no reason to believe that this was an intentional act."

Police are troubled by a detail, Allman said, "The fact that they weren't belted in, certainly is a concern to us."

Police are seeking the public's to help in piecing together the family's final 24 hours before the crash. The Harts are from Woodland, Wash.

"Gas receipts or hotel are things that we are looking for, but we haven't found anything yet," Allman said. "And in a car where the waves have taken everything out of the car, it's kind of hard to find evidence."

Police do not know the time or even the day the vehicle plunged off the cliff, Allman said, however, it is believed the vehicle had been in the water for at least several hours before being discovered.

On Friday, Cowlitz County Child Protective Services visited the Hart home, outside Portland, Ore., to follow up on reports of abuse or neglect, reports The Oregonian. Nobody answered the door.

The Harts' neighbors, Bruce and Dana DeKalb told the newspaper that they had contacted authorities after Devonte had asked them for something to eat several times, saying his parents withheld food as a form of punishment.

By Saturday, one day after the attempted CPS visit, the family was gone, Bruce DeKalb told the newspaper.

Norah West, a spokeswoman for the Washington State Department of Social and Health Services told The Oregonian that the agency tried several times to contact the family to follow up on reports — each attempt unsuccessful.

The Associated Press reports that friends described Jennifer and Sarah Hart, who adopted all six of their children, as "loving, inspiring parents who promoted social justice and exposed their 'remarkable children' to art, music and nature."

On Nov. 25, 2014, Devonte was attending a Portland, Ore., protest against police violence following a grand jury's decision not to indict Ferguson, Mo., Police Officer Darren Wilson, who is white, in the shooting death of Michael Brown, an unarmed black 18-year-old.

Devonte's sign read, "Free Hugs." Bret Barnum, a Portland police officer, came over to talk and took him up on the hug offer. Freelance photographer Johnny Nguyen captured the moment and the image, first published by The Oregonian, quickly went viral.

In a now-deleted Facebook post, his parents wrote about the encounter and described Devonte, according to The Oregonian:

"My son has a heart of a gold, compassion beyond anything I've ever experienced, yet struggles with living fearlessly when it comes to the police and people that don't understand the complexity of racism that is prevalent in our society."