Accessibility links
Opening Day: Baseball Is Longer Than Ever, But MLB Is Trying To Change That : The Two-Way Winter is over, and the game is going to look slightly different than last year. The league is trying to speed up the pace of play with rule changes. 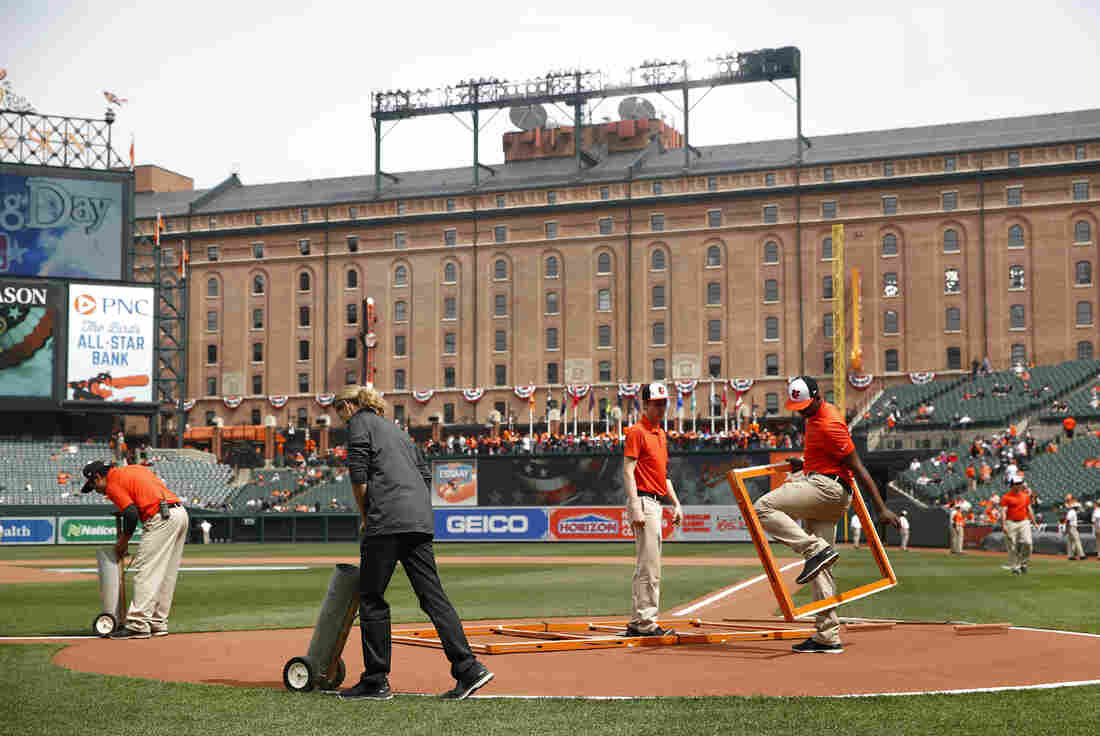 Groundskeepers prepare the infield before an opening-day baseball game between the Minnesota Twins and the Baltimore Orioles on Thursday in Baltimore. Patrick Semansky/AP hide caption 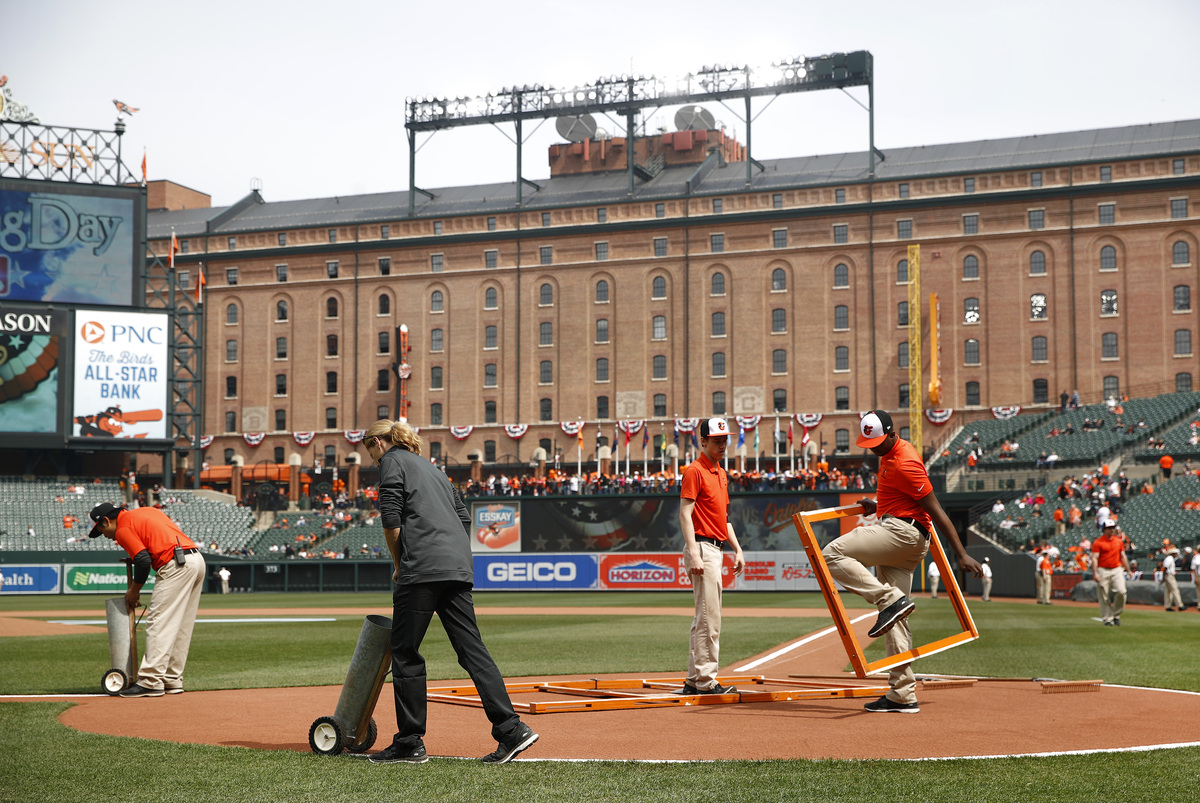 Groundskeepers prepare the infield before an opening-day baseball game between the Minnesota Twins and the Baltimore Orioles on Thursday in Baltimore.

Winter is over, and it's finally baseball season.

The fields are green and the lines are freshly drawn. Yep, it's time to head over to your local ballfield.

All 30 teams were scheduled to start their regular season today – it would have been the first time they all started together in 50 years, according to ESPN. Two of the games were rained out – Nationals-Reds and Pirates-Tigers – but it's safe to say that the vast majority of fans are getting the first glimpse of their teams' new seasons today.

Let's settle in and enjoy the first pitch of the 2018 @MLB seaso-- pic.twitter.com/VdNov3BeTx

We didn't have to wait long for the league's first home run.

That came on the first pitch of the very first game of the regular season, with the Chicago Cubs facing the Miami Marlins. Cubs center fielder Ian Happ rocketed a drive into the right field stands off of Marlins pitcher José Ureña. 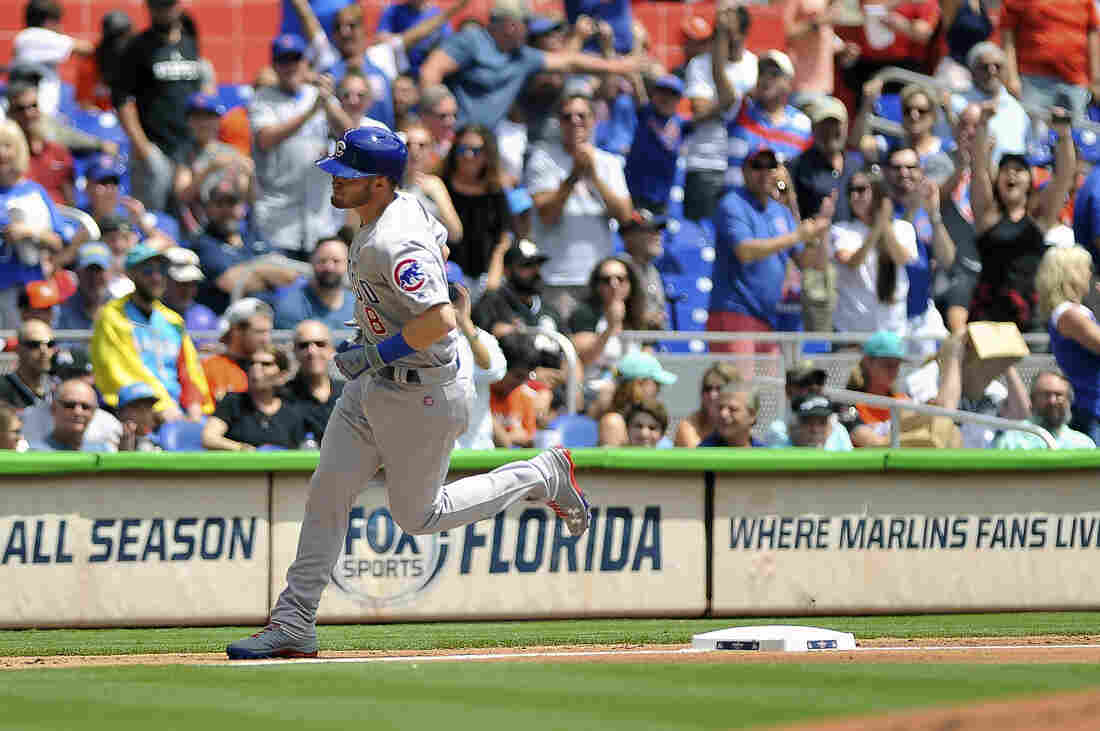 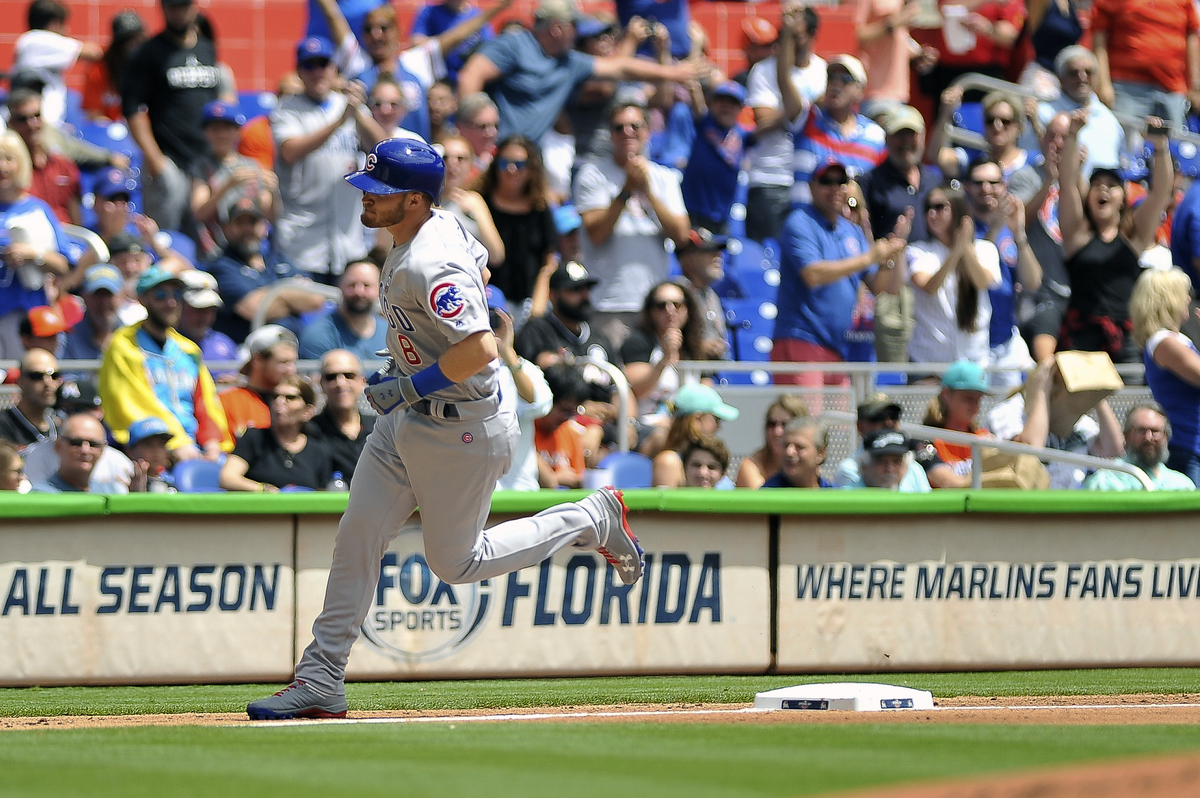 Chicago Cubs center fielder Ian Happ rounds third base after hitting a home run in the first inning of a baseball game against the Miami Marlins on opening day.

The defending World Series champion Houston Astros are facing the Texas Rangers this afternoon, and they seem pretty excited about it.

The game is going to look slightly different than last year, though, as Major League Baseball tries to speed up the pace of play with a few rule changes for this coming season.

MLB Commissioner Manfred has been pushing significant changes, arguing that they could take out "dead time" from the game while doing little to change its competitive character.

In this new season, the league will impose more limits on visits to the mound – teams will get six per team per nine innings, with some exceptions and additional visits allowed for extra innings.

There's also going to be stricter limits on the time allowed for between-inning breaks and pitcher changes. The club video review rooms are all going to be equipped with "direct slow-motion camera angles" to make calls quicker to review.

It's worth noting that there will not be a pitch clock – a change that Manfred has been pushing for that would limit the time between pitches. The player's association strongly opposed the move. Manfred has conceded defeat on that idea for this season, as CBS Sports reported, but has said "I remain a believer of the pitch clock."

He did seem to dismiss a particularly controversial idea, however. Minor League Baseball recently announced that extra innings would start with a runner already on second base, as NPR's Colin Dwyer reported.

Speaking to ESPN, Manfred said: "I don't see this as a rule that we're gonna bring to Major League Baseball." He later described it as an experiment "that probably is not Major League worthy," causing purists to breathe a sigh of relief.